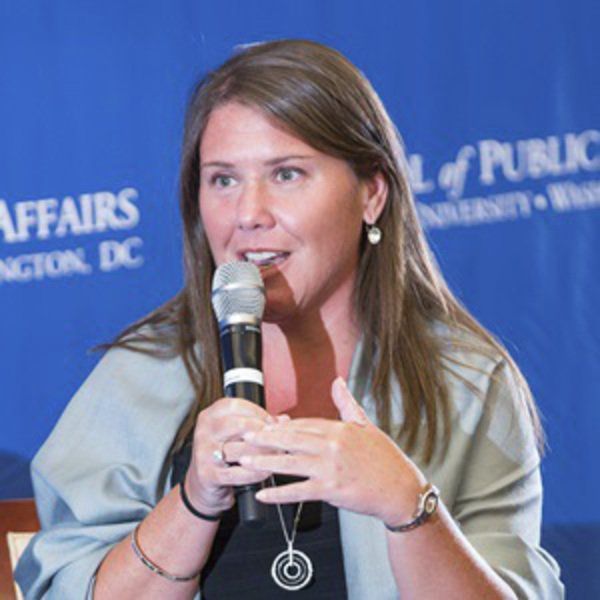 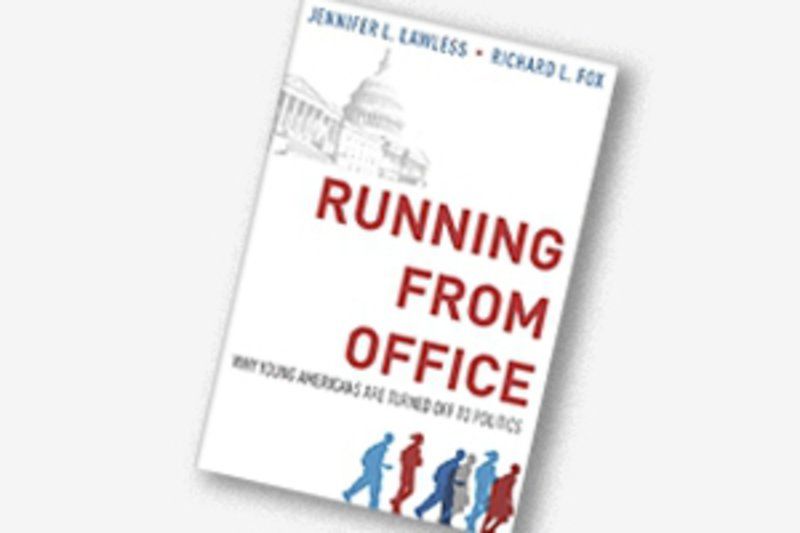 Courtesy American UniversityStudying youth: The 2015 book, “Running From Office,” found that 89 percent of high school and college students surveyed said they would not be interested in seeking public office someday.

Courtesy American UniversityStudying youth: The 2015 book, “Running From Office,” found that 89 percent of high school and college students surveyed said they would not be interested in seeking public office someday.

Young people should be idealistic. Tiny hands should shoot up when a teacher asks, "Who wants to be president someday?"

The authors of the 2015 book, "Running From Office," surveyed 4,000 high school and college students, asking if they were interested in running for a political office someday. Eighty-nine percent — almost 9 out of 10 — said, "No." Unlike their parents and grandparents, these teenagers and twenty-somethings grew up in an era of government shutdowns, contempt for the opposition and intentional dysfunction.

"For young people, this is the only politics they've ever known," Jennifer Lawless, co-author of the book and political science professor at American University, said by telephone Wednesday.

A half-million public offices need filled each year. The resistance to politics by today's young people may not subside as they age, the authors of "Running From Office" found. More likely, they'll continue to avoid the idea of running for city council, state senate or Congress later in life, based on interviews with current and past public officeholders; those politicians decided as young people to someday seek office.

Indiana recorded the nation's lowest turnout among eligible voters in the 2014 election. Among several causes cited by political scientists was the lack of contested races on both the local and state levels. As the 2016 election season ramps up with candidate filings beginning last week, the political parties figure the presence of a presidential race — which traditionally boosts voter participation — may inspire more people to seek offices farther down the ballot. Two years ago, nearly half the races for Indiana General Assembly seats featured only one major party candidate.

Those empty ballot slots add to young people's political numbness. "When they turn around and see not only dysfunction in Washington but also uncontested races on the local level, they conclude that politics isn't of interest and that no one really wants to serve in those offices," Lawless said.

"Exciting, contested" races, with more than one candidate capable of winning, are crucial to getting citizens of any age to vote, said Andy Downs, director of the Mike Downs Center for Indiana Politics at Fort Wayne. Downs targets two primary causes for the number of uncontested races — legislative districts configured so that one party can't realistically win, and misinformation about the candidates spreads much further and more rapidly in the age of social media and 24-hour technology.

Of the latter, Downs said, "Intense scrutiny is not necessarily new, and in some cases is quite valuable, but can go too far. We also can distribute information very quickly and virtually permanently. When you put excessive scrutiny together with misinformation, outright lies, and quick and permanent distribution of those things, it is not surprising that some people are not interested in running for elected office."

He added, "Of course, there are some people for whom this is not an issue because they live their lives online already."

The need to field qualified, motivated candidates is, not surprisingly, a priority for the major parties at the state and local levels. Vigo County Republican Party chairman Randy Gentry fully explains the ups and downs of running to people considering a bid. "Basically, I lay it out," Gentry said last week. That includes the cost of running a campaign. "It's not cheap, either," he added. "To run for office can be expensive."

Ultimately, Gentry asks the bottom-line question: "Why do you want to run?" For some, they're following the footsteps of a parent or grandparent. Others tell Gentry they want to bring about positive change in their community. Some candidates may be empty-nesters with more time to pursue a lifelong ambition.

"When it gets down to that type scenario, it's a very personal decision," Gentry said.

It's an admirable choice, regardless of the party labels. "In the end, I have a great deal of respect for people who do [seek public office]," Gentry said. "It's not for everybody." That's why he doesn't try to persuade people still weighing that decision just to fill the Republican side of the county ballot. He'd rather have willing candidates for half the offices up for election.

The attention paid to the ongoing 2016 presidential campaign stirs political awareness and could spur more people to run for local offices. "I think there would be some residual effect for that," said Joe Etling, chairman of the Vigo County Democratic Party. Whatever the inspiration, Etling sees an increased interest among prospective candidates in the coming election and feels "very encouraged" by it.

Etling's statewide counterpart, Indiana Democratic Party chairman John Zody, also senses heightened interest among potential office-seekers. Still, the state maintains institutional impediments to competitive races in its 100 Indiana House districts and 50 Indiana Senate districts. Because those districts — as well as those for Congress — are drawn by sitting state legislators, they tend to isolate the minority party's strongholds, virtually eliminating the chances of upsetting the incumbent party.

The minority party is a shoo-in in a few places, while the majority party dominates in the remaining areas.

"There are districts that are not very competitive [for both sides] of the aisle," Zody said. Thus, trying to recruit challengers in those lopsided districts isn't easy, especially when they realize their party must focus limited resources on more winnable races. "That's a tough sell," Zody said.

Nonetheless, Zody thinks the Democrats can pick up seats in the state House and Senate, and chip away or even eliminate the Republicans' super majorities in both chambers this fall.

By contrast to the Democrats' view, the Indiana Republican Party is "energized" about all of its races and the prospects for sustaining those super majorities, said spokesman Robert Vane, who sees the records of Gov. Mike Pence and the Legislature as positives. Vane also pointed out the risks of assuming some lopsided legislative districts — where uncontested races often occur — are indeed lost causes, citing upsets such as Republican Greg Ballard's unexpected victory in the 2007 Indianapolis mayoral race.

"No matter how bleak the prospects look, upsets can and do happen," said Vane, who formerly served as Ballard's deputy chief of staff.

Any state legislative candidate, as well as those for other state and local offices, faces the rumors and unsubstantiated claims churning online through social media which Downs, from the Center for Indiana Politics, mentioned. The speed and expanse of those comments, which have ballooned in the past decade, may be causing a greater number of prospects to pass on a run for office. "Some people like to point to the negativity of campaigning as a reason" for the number of uncontested races, Etling said.

"Things that used to be sort of barbershop or coffee shop chatter now go across the Internet," he added.

Still, Etling's optimistic about improving civic engagement in Vigo County — a community whose voting tendencies will be closely analyzed this year because of the county's unmatched record of picking the winning presidential candidate in 30 of the past 32 elections. "We're reaching out to young people, and their parents," he said.

That generational connection is important. In researching "Running From Office," Lawless and co-author Richard Fox found that young people hold high interest in community engagement, service and volunteerism. "That's sort of the beacon of light in the book," Lawless said.

It's just that those young people don't want to serve in public office, because of the examples they're seeing. These days, politicians campaign on the premise that serving in government at Washington, Indianapolis (or insert another state capital) or Terre Haute (or insert another county seat) is not a noble vocation, casting themselves as the exception, the solution. That perception often gets reinforced by adults surrounding the young people, from parents to teachers, coaches and bosses at summer jobs, Lawless said.

Given the atmosphere, it's surprising 11 percent of the young people the authors polled actually expressed an interested in running for office someday.

One remedy the authors suggest is linking political aptitude to college acceptance standards. When colleges began emphasizing volunteerism in the admissions process, that practice among teenagers "went through the roof," Lawless said. Likewise, a focus on political awareness and the value of serving in public office could encourage young people — a majority of whom want to go to college — to read the news in depth, rather than getting their current, minimal exposure to only the outrageous sound bites spotted while flipping a TV remote or the social-media clips on their cellphones.

In doing so, their perception of being a public servant could transform, too. "If that seed is not planted early, it's unlikely that interest will show up later in life," Lawless said.

And uncontested, low-turnout elections could become the norm.

CLINTON [mdash] Thomas D. Winters, 93, of Clinton, passed away Monday morning, June 29, 2020. He was born on March 3, 1927, in Shepardsville, IN, to James and Alice Winters. He was preceded in death by his parents; his wife P. Joanne; a step-great-granddaughter, Miranda Harper; brothers-in-l…