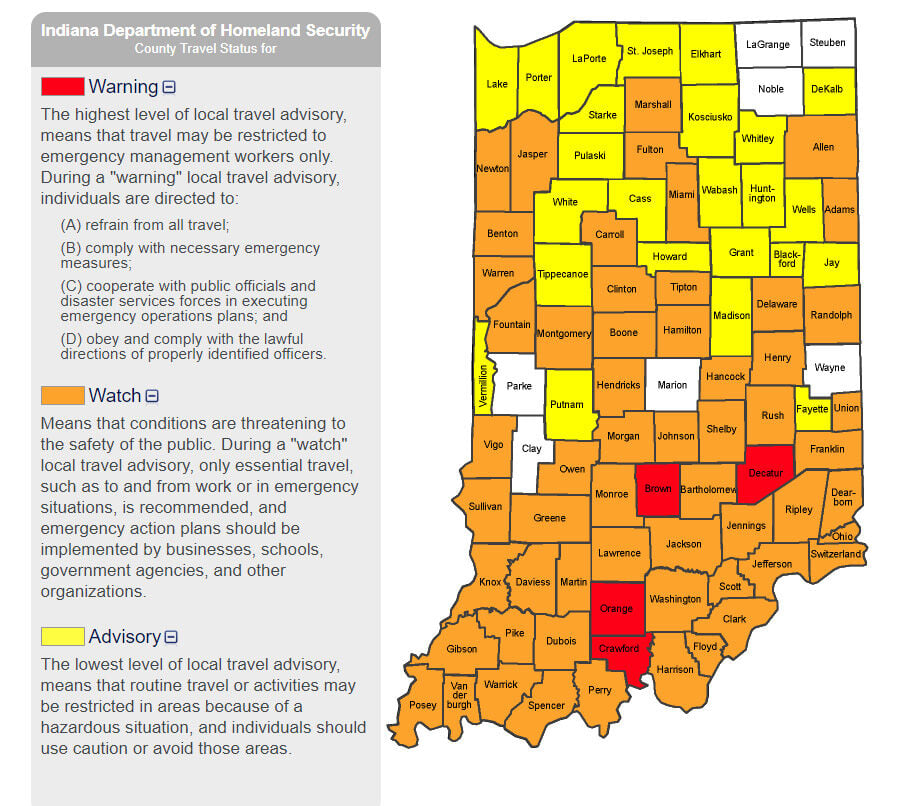 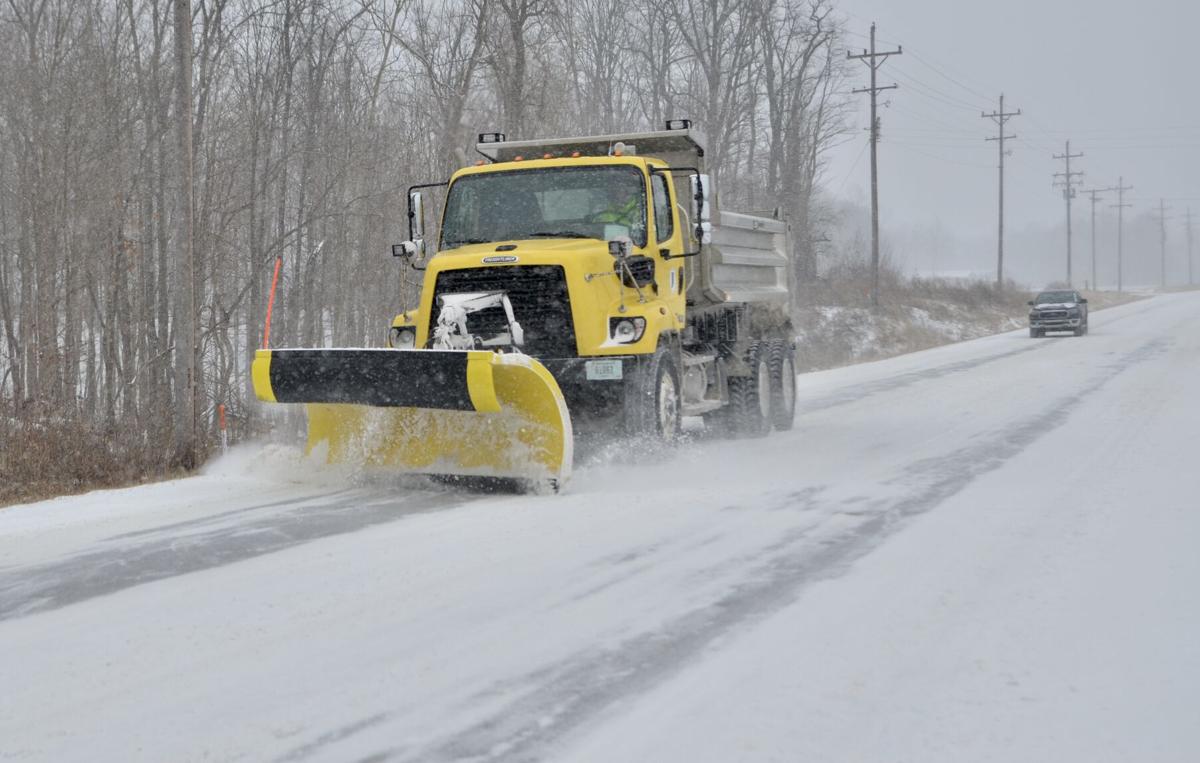 A snow plow works on U.S. 150 in West Terre Haute on Monday afternoon. 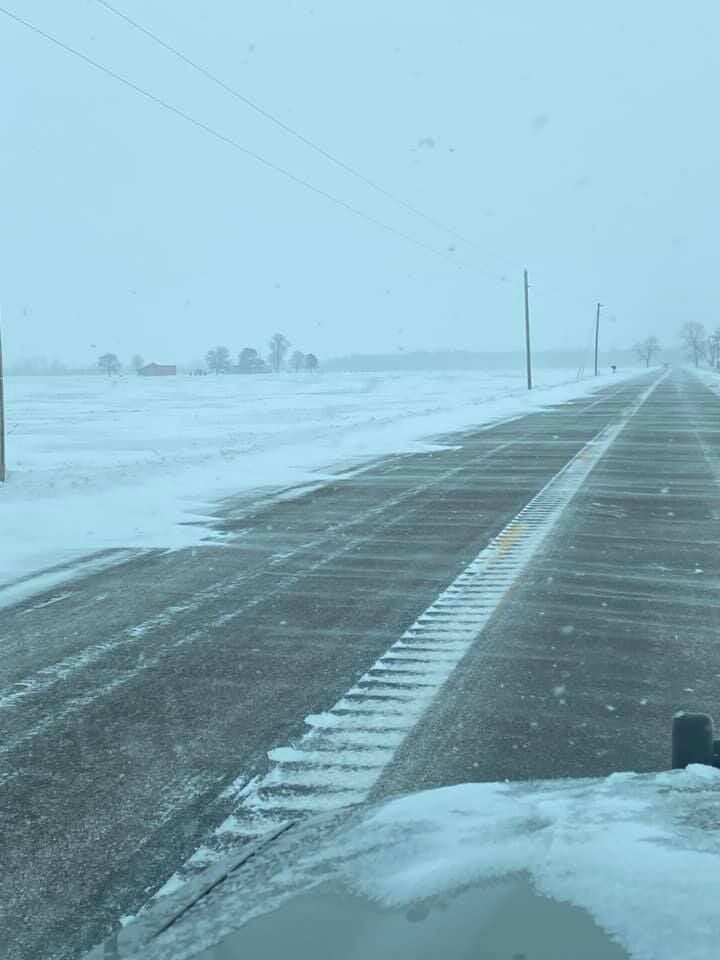 Travel Watch means that conditions are threatening to the safety of the public. During a "watch" local travel advisory, only essential travel, such as to and from work or in emergency situations, is recommended, and emergency action plans should be implemented by businesses, schools, government agencies, and other organizations.

Predicted snow amounts, winds and cold temperatures could lead to significant impacts in the moderate to major categories, the Vigo County Emergency Management Agency said in a news release.

A second wave of snow this afternoon could be more impactful with moderate to heavy snow reducing visibility, blowing and drifting snow could make travel difficult for motorists.

Lingering impacts expected into Tuesday include 20 to 30 mph wind gusts blowing snow, and hampering snow clearing efforts. Roads could be hazardous with some roads being impassable.

If you must to travel today, clear the snow off your windows, turn on your headlights and reduce your speed, police say.

The Wabash Valley is in the early stages of a winter storm, with the second wave expected to begin later this afternoon.

“The interstate is suitable so far,” Sgt. Matt Ames of the Indiana State Police at Putnamville said of I-70. “However, we know things are going to change quickly once the snow starts falling again. ISP has all hands on deck ready to assist the public.”

Vigo County School Corporation announced cancellation of all practices, contests, and school activities on Monday evening due to the weather. All schools are already shutdown today for the Presidents Day holiday.

This morning, the Vigo County Highway Department had 14 snow plow trucks out, said County Commissioner Brendan Kearns. "Everybody is out on the road right now ... We're trying to stay ahead."

At  7 p.m. Sunday, "We had a strategic meeting by Zoom to figure out what the plan of attack was, based off the weather forecast," he said. "The guys started around 3 a.m., but we're going to be working around the clock to make sure the roads are as safe as possible."

The focus is primary roads, and then secondary roads.

"We anticipate a surge around 2:30 p.m. [Monday afternoon]. We'll keep hitting it. We did mount a plow on one of our graders to anticipate it being used in rural areas where drifting may be a concern," Kearns said.

The county's purchase of several new snow plow trucks last year has really helped with clearing the roads, he said. "They've made a huge difference."

To check on road conditions, Kearns says he goes out and travels the east side of the county from north to south, including Miami Gardens Road, Tabertown, Frye and Louisville roads.

"That gives me a good idea of how the primary roads are," he said. "I provide feedback to our superintendent and supervisors. Then, I'll also hit secondary roads as much as possible. And then, I look at subdivisions."

The county is trying to reduce the amount of salt it puts down for environmental reasons; it used a ratio of three parts sand and one part calcium. "We had a problem with it being so cold, the mixture was freezing in the hoppers of our trucks, so we had to increase the ratio slightly [with more calcium] to prevent the freezing from occurring."

One of the strategies this year is to get the material down on the ground before the snow. "While it may seem like common sense, it wasn't necessarily past practice. This helps us be ahead of the game," Kearns said. It will also have to be put on top of heavy snow or ice.

He asks the public to be aware of county highway drivers clearing the roads. "It's hard for the plows to navigate safely when there could be a car  coming at them taking up the middle of the road. Yield to our guys. They are in a high stress position and they're doing what they can to keep the roads safe for us," he said.

Meanwhile, Indiana State University encouraged all employees capable of working remotely to do so today. Those who cannot work remotely were to report to work as usual.

ISU officials are to make a determination about work attendance for Tuesday after further assessment today of the storm and evaluation of the current weather forecast.

The Indiana Department of Transportation has deployed more than 1,100 plow trucks to plow and treat interstates, highways and state roads as nearly all of Indiana is expected to receive significant snow accumulation from a major winter storm.

The National Weather Service is predicting between 6 to 12 inches of snow across almost all of Indiana from Sunday evening through Tuesday afternoon.

A first wave of snow entered state from the west around 10 p.m. Sunday evening, becoming heavy and more widespread after midnight. A second wave of snow is expected later this afternoon through Tuesday morning.

INDOT crews began patrolling highways by 8 p.m. Sunday and will remain active through the winter storm. Plow trucks generally travel about 25 to 30 miles per hour and it takes between two to three hours to complete a snow route.

Motorists are encouraged to keep an emergency kit in vehicles in case of being stranded, and to keep a cell phone charged to call for help.

Travel advisories, watches and warnings are issued by county emergency management agencies. To check the travel status in a given county, visit www.in.gov/dhs/traveladvisory/.

In Vermillion County, the sheriff's department said drifting snow is a road hazard as the roads are covered soon after snow is plowed.

The National Weather Services at Indianapolis said a Winter Storm Warning remains in effect until 7 a.m. Tuesday for much of Indiana.

For the rest of the day, expect patchy blowing snow in the afternoon with new snow accumulation of 4 to 5 inches. Highs around 16 and north winds 10 to 15 mph with gusts to around 25 mph. Wind chill readings will be at 1 below to 11 below zero.

Expect snow in the evening, then a chance of snow after midnight, NWS continues. Snow may be heavy at times in the evening with accumulation around 4 inches.

Total snow accumulation will be 8 to 10 inches with lows around 7 and north winds at 10 to 15 mph with gusts to around 25 mph. Wind chill readings will be 8 below to 2 above zero.

Tuesday will be mostly cloudy in the morning then becoming partly cloudy with highs around 19. Northwest winds will be 5 to 10 mph with the lowest wind chill readings 9 below to 1 above zero in the morning.

Wednesday features a 30 percent chance of snow in the afternoon and highs in the mid 20s. Snow is also likely overnight with light accumulations.

Snow is also likely Thursday, but will diminish overnight.

By Saturday, highs are expected around 30, with a chance of rain by Sunday.

Wabash Valley residents were urged to stay home if at all possible Monday and Tuesday as a major winter snow storm that brought wind gusts, drifting snow and poor visibility made driving treacherous in many areas.