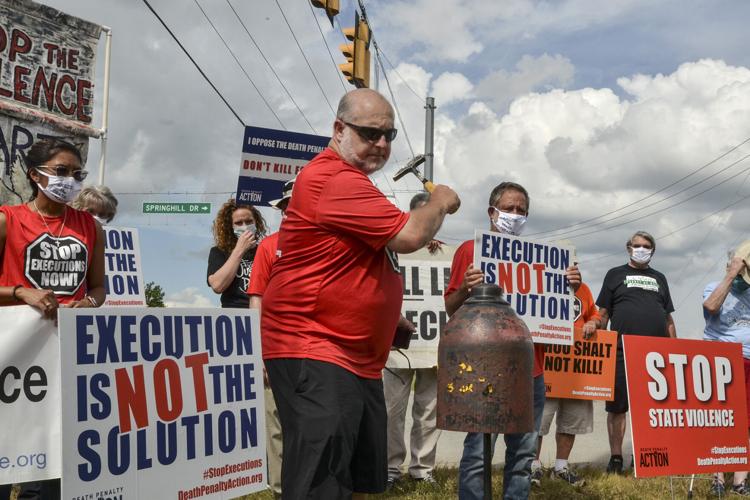 Tribune-Star/Austen Leake “It tolls for thee”: Abe Bonowitz of Death Penalty Action rings a bell at the protest against the execution of Keith Nelson across the street from the Federal Prison on Friday afternoon. 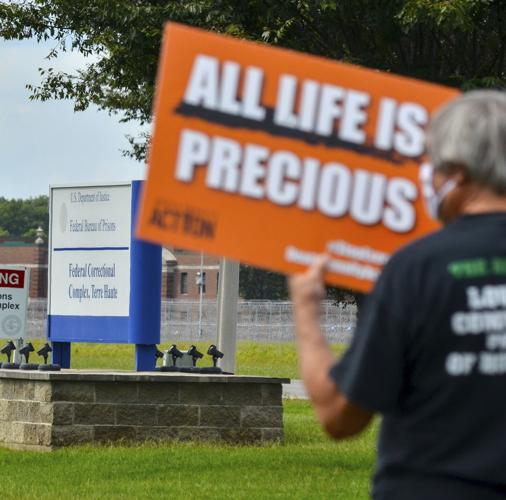 Tribune-Star/Austen Leake All life: Bill Pelke stands across the street from the Federal Prison on Friday afternoon to protest the exectution of Keith Nelson. 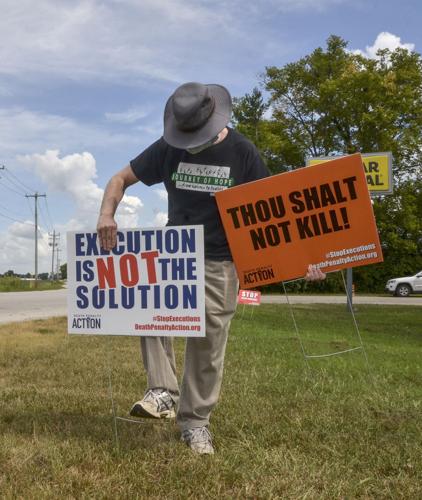 Tribune-Star/Austen Leake Letting his voice be heard: Chris Brown of Alabama plants an anti death penalty sign at the protest against the execution of Keith Nelson across the street from the Federal Prison on Friday afternoon. 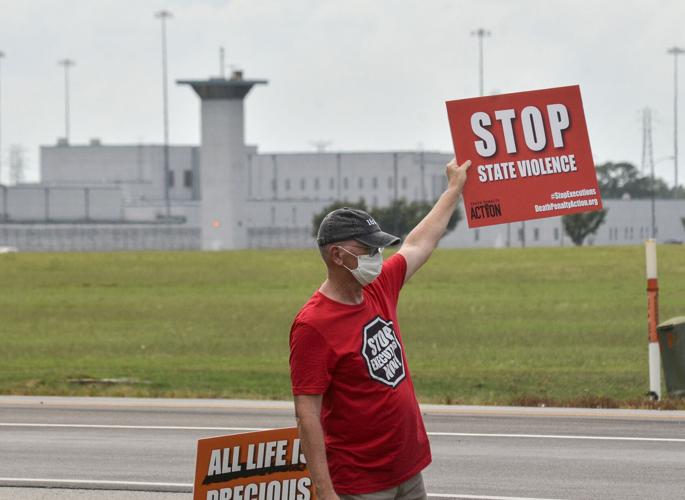 Tribune-Star/Austen Leake Stop: Wes Janz of Indianapolis holds a sign up along State Road 63 at the protest against the execution of Keith Nelson across the street from the Federal Prison on Friday afternoon. 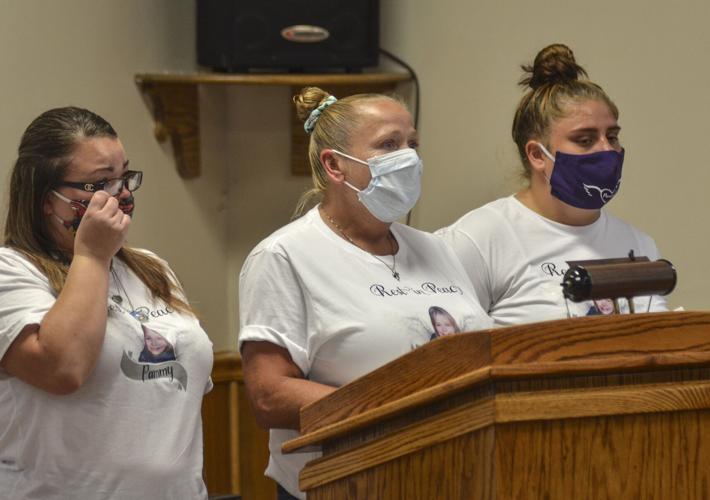 We have peace: Cheri West made a statement about how she could finally be at peace after the execution of Keith Nelson, who murdered her daughter Pamela Butler in 1999 during a press conference outside the federal prison on Friday. 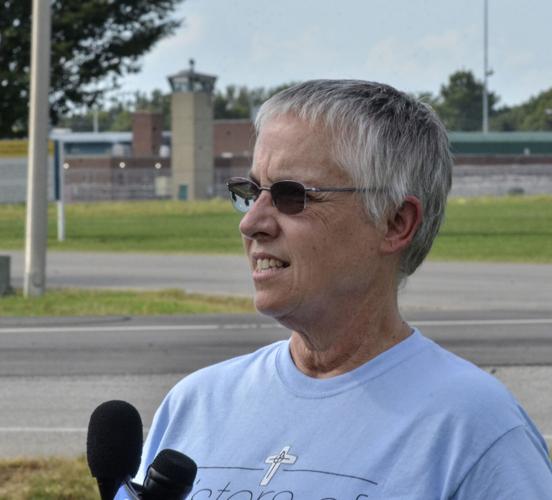 Tribune-Star/Austen Leake A tough day: Sister Barbara Battista remarks on how it felt being spiritual advisor to Keith Nelson during his execution on Friday at the federal prison.

Tribune-Star/Austen Leake “It tolls for thee”: Abe Bonowitz of Death Penalty Action rings a bell at the protest against the execution of Keith Nelson across the street from the Federal Prison on Friday afternoon.

Tribune-Star/Austen Leake All life: Bill Pelke stands across the street from the Federal Prison on Friday afternoon to protest the exectution of Keith Nelson.

Tribune-Star/Austen Leake Letting his voice be heard: Chris Brown of Alabama plants an anti death penalty sign at the protest against the execution of Keith Nelson across the street from the Federal Prison on Friday afternoon.

Keith D. Nelson died by lethal injection at 4:32 p.m. Friday at the U.S. Penitentiary in Terre Haute, becoming the fifth person to be executed this summer after a 17-year hiatus on federal executions.

Nelson, 45, made no statement prior to receiving a lethal dose of pentobarbittal to stop his heart. Nelson was convicted in the October 1999 kidnapping, rape and murder of 10-year-old Pamela Butler, who was rollerblading in front of her home in Kansas City, Kansas.

The execution began at 4:23 p.m. and was concluded just nine minutes later. Media witnesses could see Nelson's sheet-draped body lying on a gurney. His breathing became visibly labored during the process, but he made no movement prior to being pronounced dead.

Inside the execution room with Nelson were individuals identified as a U.S. Marshal, two Bureau of Prisons officials, and spiritual advisor Sister Barbara Battista of the Sisters of Providence at Saint Mary-of-the-Woods.

The execution was also witnessed by the mother and sisters of the victim.

“What happened to Pammy was just horrible. She suffered a horrible death,” said Cherri West, Butler's mother. West said she felt guided by her daughter to fight for Nelson's death.

“I feel at peace now. And I feel that Pammy's soul is at peace and she can rest. That was my number one goal — to give her justice so she can rest,” West said following the execution. “I think she was always behind me and guiding me to keep fighting. And that's what I've done.”

Butler's abduction was witnessed by one of her sisters. The crime and Nelson's arrest and trial were well-publicized in the Kansas City area.

“It is literally the worst nightmare any parent can go through,” West said, recalling the loss of her daughter. “To have your kid stolen, and then not know if they're OK, if they're eating, if they're cold. And you can't help them. You can't find them.”

In 2001, Nelson pleaded guilty in a Missouri federal court to charges of kidnapping and unlawful interstate transportation of a child for the purpose of sexual abuse which resulted in death. He admitted to taking the girl to a forest behind a Missouri church where he raped and strangled her. He was sentenced to death in March 2002.

Battista said she spoke briefly with Nelson in the execution room Friday, but was asked not to speak when the execution began. She did read Psalm 23 and Psalm 43, and quietly said a prayer during the execution.

After his death, she anointed him with oil, blessed him on his way and prayed the angels greet him, she said.

Battista said she felt the execution was a very sterile environment that was highly orchestrated.

“They tried to make it as if he was not another human being. They had him all covered up. You could hardly see that was a person,” she said.

Battista said she intends to continue protesting executions as a false way of rooting out violence.

After she left the prison grounds, she joined other protesters who gathered along Indiana 63 across the highway from the entrance to the federal prison.

"It's clear that this rapid-fire execution schedule is all about Donald Trump setting up a debate point for when he is on the stage with Biden,” said Abraham Bonowitz, director of Death Penalty Action. “He is now the most-executing president since the 1950s."

On Wednesday, 38-year-old Lezmond Mitchell became the fourth person executed in 2020. Mitchell had been the only Native American on federal death row.

In July, inmates Dustin Honken, Wesley Purkey and Daniel Lewis Lee were the first three federal inmates to be executed in 17 years. All were convicted of killing children.

The Department of Justice has scheduled two other executions for September.

"If nothing blocks the two executions set next month, he'll match Truman's seven," Bonowitz said of President Trump. "If he gets two more, he'll exceed Eisenhower's eight. Roosevelt had 17. I wouldn't be surprised if he tries to exceed that, because for Trump, it is always about being the most, the biggest, and the best. He really cares not a lick about the victims' families or the government employees who are all forced to endure increased exposure during the pandemic, just for the sake of the president's re-election campaign."

Legal maneuvers to stop today’s planned execution of federal death row inmate Keith D. Nelson began playing out Thursday when a federal judge issued an injunction based on lack of a prescription for the lethal drug used in the death chamber.Nelson is

Death occurred at 4:32 p.m. for Keith Nelson in the execution chamber at U.S. Penitentiary in Terre Haute. Nelson made no final comment. Sister Barbara Battista, SP, was in the chamber for Nelson.