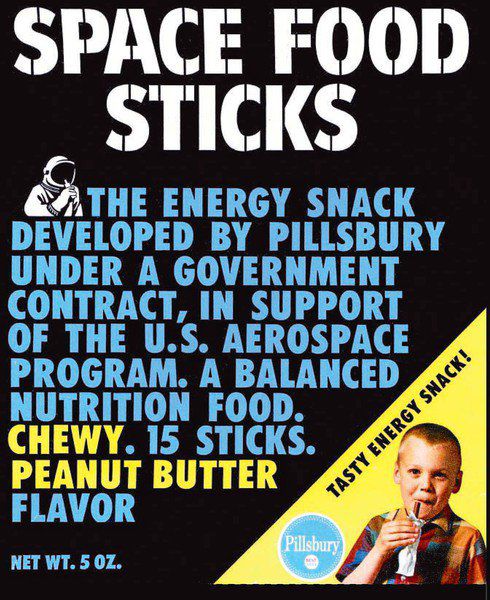 Courtesy Retrofuture ProductsSpace fascination: An original box of Space Food Sticks cost consumers 59 cents in 1970 and ‘71. Pillsbury produced the snacks, based on versions developed for Apollo and Skylab astronauts. Terre Haute’s former Pillsbury plant was among the first to do so. 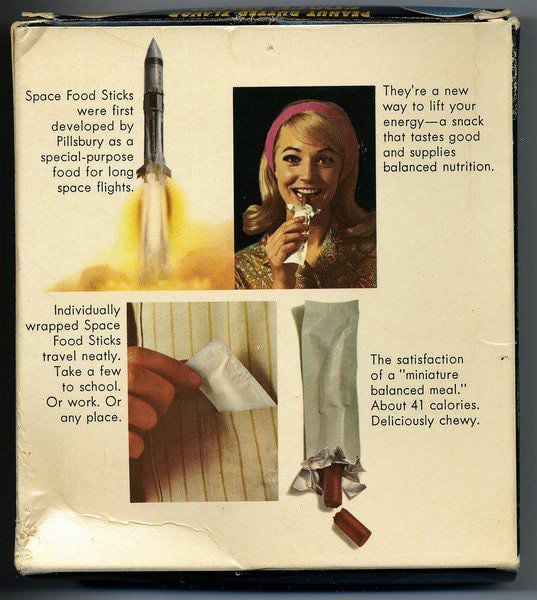 Courtesy Retrofuture ProductsFlipside: The backside of a Pillsbury Space Food Sticks box explains the snack’s history with NASA and its value to consumers. (They were “about” 41 calories.) The sticks, produced in the 1970s at Pillsbury plants such as the one formerly in Terre Haute, were a forerunner of today’s energy bars.

It’s been a while since I downed a glass of Tang. I’m guessing it tasted better to me when I was 9 than it would now.

Space mania influenced 1960s and ‘70s schoolkids that much.

Tang, an orange-flavored drink that never seemed to fully dissolve in a glass, skyrocketed into young Americans’ diets after astronaut John Glenn sipped it on his Mercury and Gemini space flights. “Tang: For Spacemen and Earth Families,” declared newspaper ads. Of course, Tang’s actual taste mattered less than its destiny, at least to a fourth-grader’s palate.

Space fascination wasn’t limited to the contents of a lunchbox Thermos, though. It filled the TV Guide listings — “The Jetsons,” “Lost in Space,” “My Favorite Martian,” “It’s About Time” and the mother of all prime-time intergalactic television adventures, “Star Trek.”

Model rocket sales soared. AM radios crackled with the sounds of David Bowie, singing about “floating ‘round my tin can.” Millions of backyard telescopes aimed at the moon, giving young eyes a glimpse of lunar landmarks like the Sea of Tranquility, where Apollo 11 landed on July 20, 1969 — 50 years ago Saturday.

And there were Space Food Sticks, manufactured right here in Terre Haute.

Just eight days after astronauts Neil Armstrong, Buzz Aldrin, Michael Collins and their command module, Columbia, splashed down in the Pacific Ocean, officials at the local Pillsbury plant stirred a splashy headline on their own. “Space Food Will Be Produced Here,” the Terre Haute Tribune declared. Specifically, the factory would be making Space Food Sticks, a consumer version of a snack developed by Pillsbury, NASA and U.S. Army food scientists for space travelers, according to that August 1969 newspaper account. Haute cuisine, indeed.

The orbit-ready version of the tube-shaped sticks were concocted by Pillsbury scientist Howard Bauman, along with NASA and Army cohorts, according to the Space Food Sticks Preservation Society. (Yes, that’s actually a thing.) They created a food astronauts could eat in emergency situations, such as a loss of cabin pressure in a space capsule. Astronauts could slip the sticks through an airtight portal in their helmets and maintain their strength, while they presumably fixed the cabin-pressure ordeal.

Those food experts blended “nutritionally balanced amounts of carbohydrates, fat and protein” with chocolate, peanut butter and vanilla flavors. Prospective astronauts tested the sticks on earth to make sure others avoided “any potential individual problems with gastrointestinal compatibility” in space. (That’s important for three men inside a 12-foot by 10-foot space module.)

Back on earth, Pillsbury seized the moment, amid the Apollo 11 euphoria. They decided to market those snacks to earth-bound humans.

Pillsbury’s factory on the bluff overlooking the Wabash River already employed 180 workers in the summer of ‘69, when the August announcement revealed another 30 would be hired to help produce the Space Food Sticks. An extruder, mixers and packaging equipment were added to existing production lines, as well as a new warehouse, the Tribune reported. By January, the Terre Haute plant — and others elsewhere — were shipping chewy confections around the country and beyond in multiple flavors.

These were America’s original energy bars.

Folks at the Pillsbury plant produced numerous foods, so they didn’t run the Space Food Sticks line constantly, explained Linda Cooper, a retired Terre Haute employee. Cooper joined Pillsbury after the Space Food Sticks days, but learned details of it from longtime coworkers. Cooper also remembers putting the snacks into her sons' school backpacks. The sticks contained “about 41 calories,” as their package explained Tuesday, ideal for Cooper’s sons, who needed to maintain their weight as high school wrestlers.

By then, Pillsbury had dropped “space” from the snack’s name, and sold them as merely “Food Sticks.” (It’s hard to imagine a more generic name.) They sold as Space Food Sticks in the early ‘70s, when six Apollo missions reached the moon. Once those ended, and America’s fascination with space waned and NASA funding drew criticism amid the nation’s energy crisis, Pillsbury deleted that word from the sticks’ labels.

Still, they made history. Astronauts actually consumed the sticks — validating the “space” portion of their name — during 1973’s Skylab mission. The crew (10 bonus points if you remember their names) of Gerald Carr, Ed Gibson and William Pogue ate “chocolate chip, crispy and flake” flavored sticks every third day of their 60-day flight to observe the sun, moon, Comet Kohoutek and galaxies from an orbiting laboratory, a NASA account explains.

That heyday passed and by the 1980s, (Space) Food Sticks disappeared from the supermarket and outer space. Terre Haute’s Pillsbury plant closed in 1990, and its massive, renovated concrete building reopened last year as the RiverFront Lofts Apartments.

Then in 2000, Space Food Sticks were revived by Retrofuture Products, a New York company run by Eric Lefcowitz, a businessman with an affinity for the ‘60s. In addition to writing books about The Monkees and The Beatles, Lefcowitz also reintroduced Space Food Sticks in 2006 to markets around the country. The Kennedy Space Center, the Smithsonian and Disney World gift shops also stocked them. Sales ceased four years ago after Retrofuture’s manufacturer ended production.

Another iteration of Space Food Sticks is coming, though, Lefcowitz explained Monday by phone from New York, also the home base for the preservation society. A version of the sticks containing a “light dose” of cannabis will be released for adult consumers in California on this moon landing 50th anniversary weekend, with subsequent releases in select states where recreational marijuana has been legalized. Lefcowitz emphasized that the packaging with have no NASA reference or kid-oriented messaging.

“It should be interesting to see what the public’s reaction is,” Lefcowitz said.