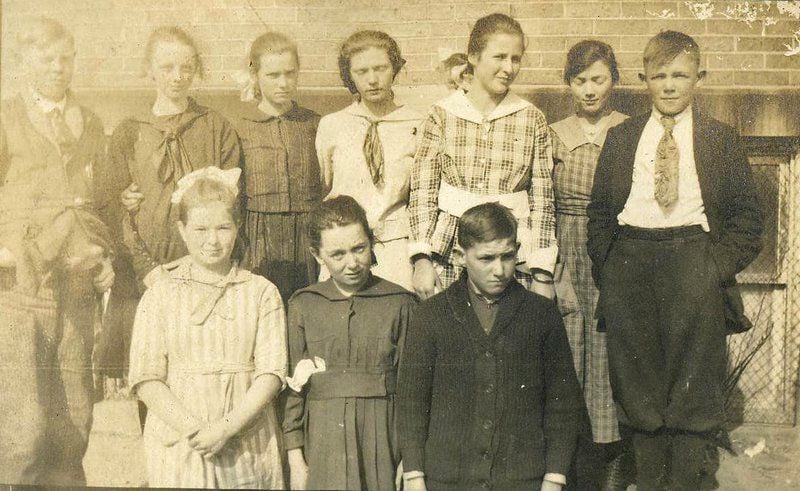 Courtesy of INGenWeb/Mark MohrSchool days: The 7th-grade class of Tangier School in Parke County is photographed in 1918. The children came to know hardship through poverty, war and an influenza pandemic. 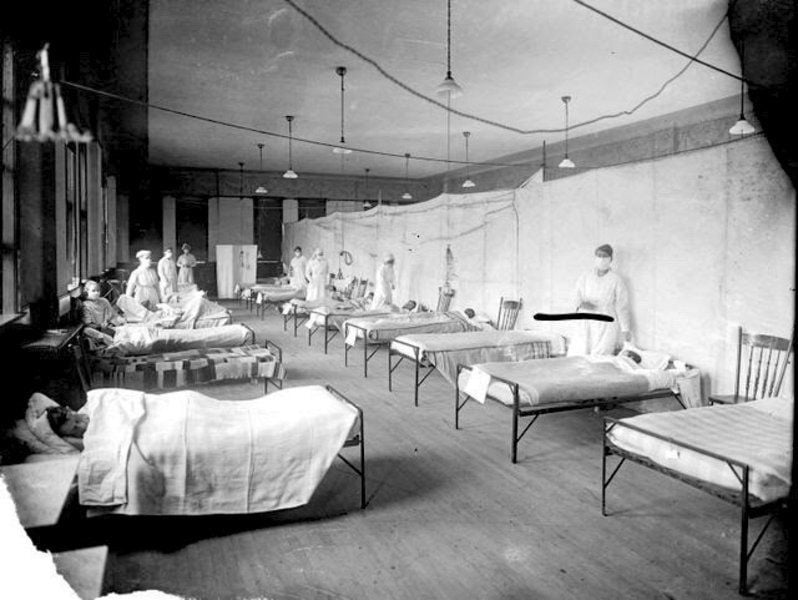 This photo shows a temporary flu ward in Terre Haute in 1918. It is courtesy of Valley Vision and Voices, Martin's Photo Shop. 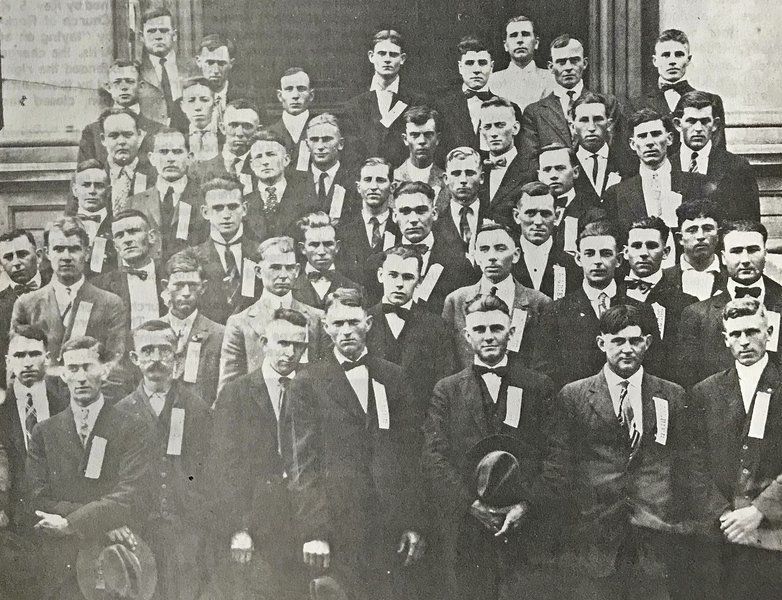 Courtesy of Parke Place Magazine/Elizabeth BigginsOff to war: These Parke County draftees in the fall of 1917 didn’t know that influenza would be every bit as deadly an enemy as the German Army when they posed for this photo on the steps of the Parke County Courthouse in Rockville.

Courtesy of INGenWeb/Mark MohrSchool days: The 7th-grade class of Tangier School in Parke County is photographed in 1918. The children came to know hardship through poverty, war and an influenza pandemic.

This photo shows a temporary flu ward in Terre Haute in 1918. It is courtesy of Valley Vision and Voices, Martin's Photo Shop.

Courtesy of Parke Place Magazine/Elizabeth BigginsOff to war: These Parke County draftees in the fall of 1917 didn’t know that influenza would be every bit as deadly an enemy as the German Army when they posed for this photo on the steps of the Parke County Courthouse in Rockville.

I was still a bit groggy and sitting at the kitchen table with a cup of coffee in fist when an incoming text rang my eyes the rest of the way open. It was my friend, Joe, who for some reason can’t stay in bed much past sunrise, and since we hadn’t spoken for a few days, he wanted to catch up.

In less than a week the world had dramatically changed, even for the two of us, a pair of small town/country boys who are now old enough to be considered the most “vulnerable” for contracting the coronavirus. As much as I’d like to think that it isn’t dangerous for us to be out and about, I don’t believe the warnings are a hoax or nefarious conspiracy or exaggerated. We are being told to “socially distance” ourselves from others, and I am taking it to heart. It will be harder for Joe because he is a people person; easier, perhaps, for me because I am a bit of a curmudgeon who likes time to himself.

“What is your take on the virus,” Joe asked. “It has me puzzled.”

That was all he needed to say before I had my fingers flying in full response mode; my friend probably wished he’d never taken his phone out of his woodshop-dusty blue jeans.

I told him things he already knew, that pandemics happen — have always happened — and we were underprepared for this one. I told him I’m afraid our health system could be overwhelmed and we should listen to what the science of this thing is telling us; that we should be prepared to be inconvenienced for a while; that we’ll see both the worst and the best of human nature.

Perhaps Joe felt I had already spent too much time in antsy self-imposed exile at home, for it took a while for him to finally send a reply.

The coronavirus pandemic of 2020 is not the Spanish Flu epidemic of 1918, but being a student of history, I would encourage those who are currently bunkered down at home to watch the “American Experience” episode, “Influenza 1918.” The program is 10 years old now and online. I showed it every year to my American History classes, and I think those of my former students who remember it can now see why I bothered; the film is sobering.

It is unimaginable that 675,000 Americans died of the flu in 1918, the last year of the Great War. World-wide, it is estimated that one in three human beings contracted it, and as many as 50 million died of it. The influenza’s scythe did nothing but add misery to an already war-ravaged world.

The United States was the greatest technological and social force on the planet in 1918, yet Americans died that year from a virus that our scientists could not even see; a microscope powerful enough had not yet been invented. Strangely, the flu that year — a strain of H1N1— targeted, not the older and more frail, but the young and more robust; it principally affected those 4-24. Despite both the armies of the Central and Allied Powers being devastated by the flu, neither side would report the affect it was having on their war efforts. Of the 53,000 American soldiers and sailors who died in WWI, 45,000 died of the virus, many while still in training camps at home.

The Spanish Flu was unlike any disease that had ever been seen. It came in several waves, the first often called the “three-day fever,” which seemed minor and killed few. The second was different; many newspapers referred to it as “the plague.” Medical professionals struggled to cope with a disease they couldn’t possibly understand. There were no antibiotics yet to treat secondary infections associated with influenza; no vaccine could be developed. In those regards, I think we should be much more hopeful in facing Covid19.

Like now, there was an incredible effort to combat the flu, and despite despair and sadness and hardship, Americans came to understand that isolation and quarantine, hand-washing and disinfecting, and, yes, social distancing, worked where it was applied. What had once been treated as a disease that was “over there” and far away, came to visit and stayed a while, but it eventually burned itself out and many of those exposed grew immune.

I recommend the film because even though it may scare you, it might encourage you too. We need to experience both emotions, and we need to pay attention to the events of the past. In 1918, there was both calm in the face of danger and there was unrest, acts of bravery and cowardice, moments of incredible sacrifice and those of hoarding and selfishness. It is little different for us now, although, clearly, the modern conveniences of living in these times are also contributing to the more rapid spread of the virus around the world.

The coronavirus and the Spanish Flu are separated by over a century, yet in the long run, with the 20/20 vision we develop by looking back in time, we’ll see that the same heroic people — with different names, of course — will lead us through this terrible time.

The real heroes will be those who cared for their neighbors, those who gave instead of took, those who stepped up in concern for people they didn’t know; those who were inconvenienced by simply having to stay home or go without; those who were economically crushed, but got back on their feet.

When a vaccine becomes available, I would hope that we have also learned from history that we need to line up to receive it. And, hopefully, we will come to appreciate, more than ever before, those people who work at jobs that are often considered less than important until they become “essential” to us. I don’t think anyone should ever again underestimate the importance of a truck driver, grocery store stocker or waitress, a postal worker, non-profit volunteer, pharmacy cashier, or custodian, and so many, many others… If you have never thought about the terrible chances any hospital staffer, or nurse or doctor, take on a daily basis, let alone in the face of a pandemic, you need to do it now.

Before Joe left the conversation that day, he said, “I do have faith that everything will turn out all right.”

If our history tells us anything, he’s right about that.

You can contact Mike Lunsford at hickory913@gmail.com; his web page is at www.mikelunsford.com.