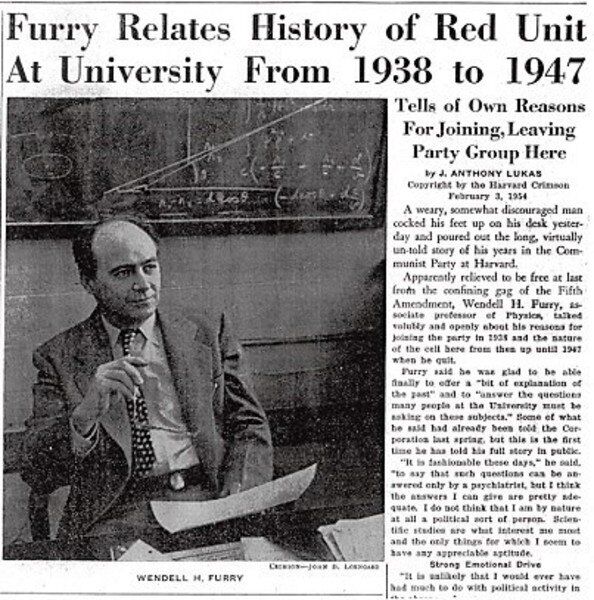 Submitted photoPivotal moment: Harvard University physics professor Wendell Furry is pictured and quoted in this 1954 story in the Harvard Crimson newspaper, related to his testimony in the McCarthy hearings. 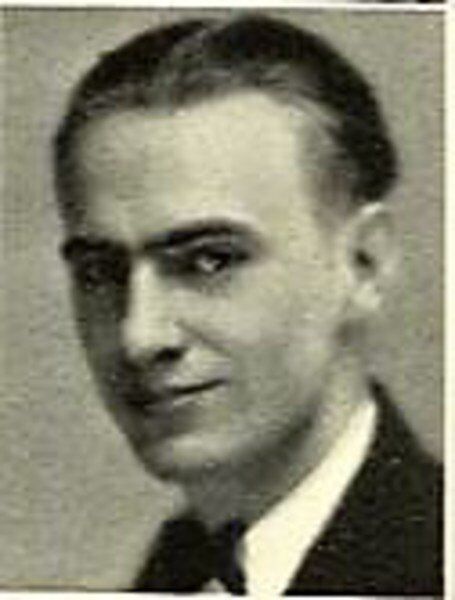 Wendell Furry was born in the small town of Prairieton in Vigo County.

He grew up to become a renowned physicist. His research on radar technology with science icon J. Robert Oppenheimer helped America prevail in World War II. Furry eventually served as chairman of the most prestigious college physics department on the planet, at Harvard University.

A kid from a little place called Prairieton did all that and more.

Yet, most folks reading this have never heard of Wendell Hinkle Furry. A few people in Farmersburg, another small Hoosier town just south of his birthplace in Prairieton, may recall his legacy as the bright minister’s son who later attended school there. Otherwise, his life from 1907 to 1984 is a fading memory.

Furry’s accomplishments as a physicist might be more widely known in the Wabash Valley, if not for another title he wore for a few years in the 1930s and 1940s — communist.  At the time, he considered it “quite consistent with being a loyal American.”

Eventually, though, he abandoned his “flirtation” with that ideology and repudiated it. His mistake didn’t go away, though.

That period in his life would’ve been largely forgotten if not for McCarthy’s obsessive quest to expose Americans that the Wisconsin senator deemed to be “un-American.” Furry became one of McCarthy’s targets. During the infamous McCarthy hearings in the Senate in early 1954, Furry managed to infuriate McCarthy, “America’s archetypal bully,” as Tye writes in “Demagogue.”

Furry previously had been subpoenaed multiple times by the U.S. House Un-American Activities Committee, but refused to answer questions about his communist ties by invoking his Fifth Amendment rights. Finally, Furry agreed to testify, with McCarthy interrogating. The senator accused Furry of leading a cluster of subversives at “Red Harvard.”

In reality, Furry had rejected the then-communist “experiment” years earlier.

His showdown with McCarthy unfolded on national television. Furry admitted his past foray into communism but refused to name colleagues who had done the same, his First Amendment right. The irate McCarthy made him pay.

For his refusal to implicate others, Furry received a contempt of Congress citation. Years later, the charge was dropped in a court case. The hearings exposed McCarthy’s bullying, exaggerations and brutal character assassinations, and the senator fell out of favor with the American public. But his tactics left lives damaged.

Tye’s book summarized the fallout on those targeted by McCarthy in a chapter titled “The Body Count.”

“I went back and looked at the effect of McCarthy’s targeting of people on the rest of their lives, people like Wendell Furry,” Tye said Friday in a phone interview.

“And you saw, in case after case, people’s careers and lives were upended in a way that didn’t end the day they stopped testifying, or the day that their legal case was dropped, like it was with Furry. This was something that went on.”

Nearly a dozen people, including two U.S. senators, took their own lives “because of what McCarthy did to them,” Tye said.

McCarthy’s career and life unraveled, too. He died in 1957 of complications from alcoholism.

Furry dealt with the aftermath of McCarthy probing the history of the professor’s thoughts. His employer, Harvard, kept Furry in his job, but also showed more concern for avoiding adverse publicity from the hearings than in supporting its faculty members’ rights, Tye said.

Furry’s wife and daughters suffered harassment in the small Massachusetts town where the family lived, according to a 2007 book, “Moscow Stories,” written by yet another Farmersburg elementary school alum-turned-Harvard professor, Loren Graham.

The pressure Furry himself faced during McCarthy’s reckless crusade in 1953 and ‘54 “must have been enormous,” Tye said. He added, “It was for many of these people, unbearable.”

“He faced all kinds of legal costs in having to defend himself against the citation by Congress,” Tye said, “and the stress at home for somebody who was a serious scientist who helped America, I think, win World War II. The idea that he would be disparaged for what he believed, as opposed to what he did, that seems to me decidedly un-American.”

The story of Wendell Furry and Joe McCarthy actually ends with “upbeat” lessons, though.

Furry endured what Tye believes was “a ruinous episode in his life.” The professor kept going, though.

Harvard later promoted Furry to be chairman of its acclaimed physics department. He continued teaching at the university until retiring in 1977.

“He kept his career and life on track, and I think he was just a very determined guy,” Tye wrote.

“He was a great scientist, and yet the taint or heroism — depending on your perspective — from what he did with Joe McCarthy ended up being a defining chapter of his legacy in a way that he certainly never would’ve wanted it to be,” Tye said.

The larger lesson of McCarthy’s rise to power is its inevitable brevity. The term “demagogue” has been attached to other American figures such as former Louisiana Gov. Huey Long and former Alabama Gov. George Wallace. President Trump’s critics have given him that label, too.

Demagogues eventually cause their own undoing, Tye explained.

“And given time, the American people rediscover our wisdom and our better nature, and root out bullies from within our midst,” Tye said.

His book has drawn widespread attention since its release last month. The Wall Street Journal highlighted it on its front page. Former President Bill Clinton phoned Tye last week to talk about it.

• Larry Tye’s book “Demagogue: The Life and Long Shadow of Senator Joe McCarthy” (published by Houghton Mifflin Harcourt) is available in hardback at $36 a copy in bookstores and online vendors now.