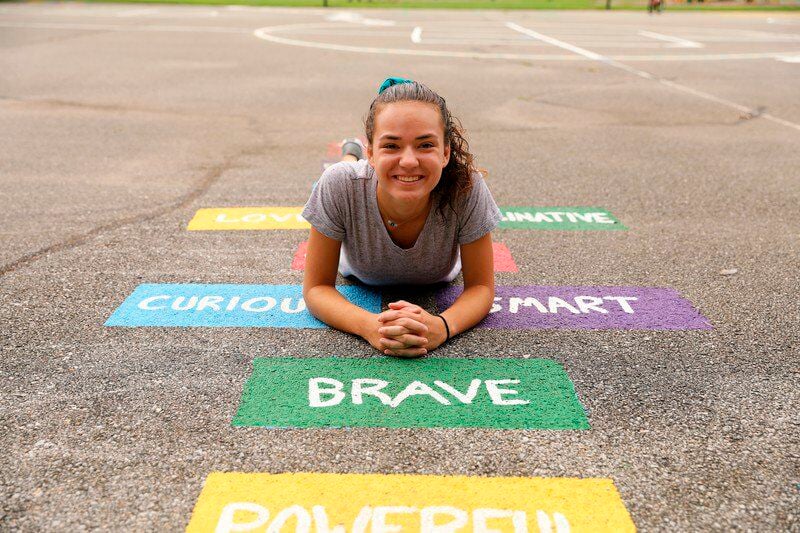 Submitted photoExtra effort: Crispin Ewen organized a team of helpers to turn a concrete slab at Meadows Elementary School into a play area. The designs include a hopscotch path, labeled with encouraging words. 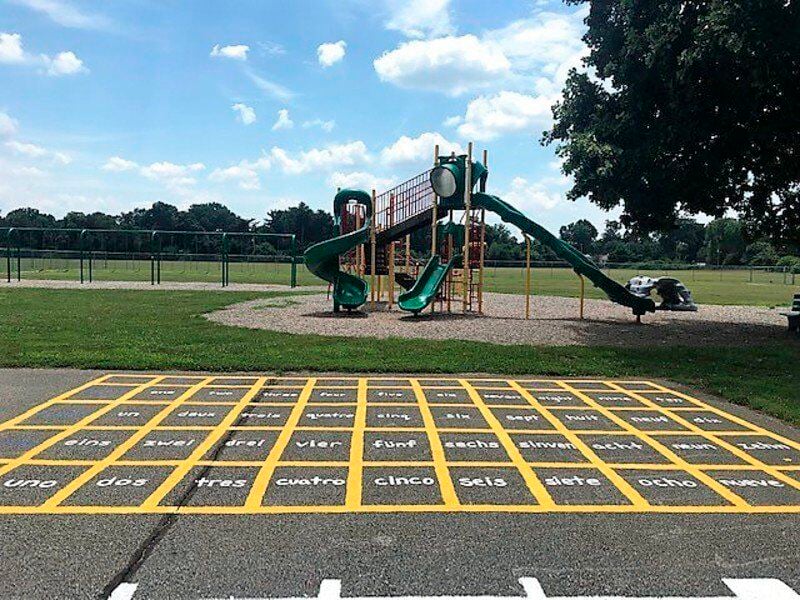 Submitted photoMultilingual fun: A counting grid, painted at Meadows Elementary School by Girl Scouts Gold Award recipient Crispin Ewen and friends, features numbers one through ten written in German, English, French and Spanish. Kids at the school could study those languages in their high school years. 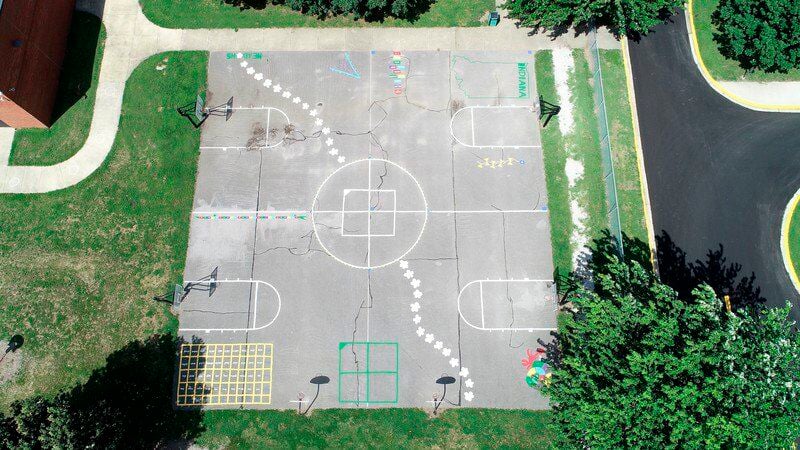 A wall in a Memphis, Tennessee, neighborhood reflects a touch of Crispin Ewen’s outlook on life.

It’s a place that’s seen tough times. A church group’s mission trip brought Ewen there two summers ago. The young people had been tasked with painting a floral scene on the wall. Instead, they decided to use the neighborhood kids’ hand prints for the heart of the wall’s design.

“We realized it needed to be more fun and interactive for the children there,” she recalled Wednesday. The wall became “a brighter corner to the neighborhood. It showed kids there’s more out there in the world.”

The 18-year-old woman helped bring a similar window to the world to her hometown, Terre Haute. Ewen — joined by her Terre Haute South High School cross country teammates, fellow Girl Scouts, her troop leader Carolyn Watson, and her sister, Sophia — used paints to turn a concrete slab at Meadows Elementary School into an inspiring play area for the students.

“I hope they get physical activity there,” Ewen said. “And, I feel that it’s a brighter thing.”

The play area features a hopscotch course with encouraging words, a four-square, kickball and basketball courts, a counting grid, a multilingual numbers chart and other designs. The transformation of that concrete was completed last year and served as Ewen’s final project for the Girl Scouts Gold Award, the highest level of achievement for a girl in the 108-year-old organization.

It’s also good to be reminded that the newest generation of adults includes folks willing to think beyond themselves and their own turf.

Gold Award scouts are “making the world a better place for others. These young women are courageous leaders and visionary change makers,” the Girl Scouts of Central Indiana leadership said this week in announcing Ewen’s honor. “They are our future, and it looks bright.”

Normally, Ewen would’ve personally received her Gold Award at an Indianapolis ceremony this summer. Of course, “normal” has all but disappeared in 2020. The summer event, like so many others, was postponed as a precaution amid the COVID-19 coronavirus pandemic. It’s been tentatively rescheduled for November, said Katie Dawson of the Girl Scouts of Central Indiana.

Ewen will be in the midst of her freshman year at the University of Evansville by then, but intends to attend the ceremony.

Ewen and other members of the Class of 2020 from high schools around the country have missed out on the rituals of commencement ceremonies, proms, sports seasons, plays, concerts and talent shows because of the pandemic. “It’s definitely slowing down my thinking,” Ewen said. “You can’t go out and do all the things you did in the past.”

Unusual twists will follow her to college. Studies at UE have changed to prevent the spread of COVID-19 among staff and students. The university announced last week it’s moving the start of classes back to Aug. 26 from Aug. 17, and ending the fall semester on the Wednesday before Thanksgiving. Ewen will be taking three classes online and two in person. Her in-person course subjects are French and business, part of her double major of global business and marketing.

“I like the international study of things,” Ewen said. “It’s what I’ve been passionate about.”

She and her crew of helpers created a chart of numerals from one to ten, written in French, English, German and Spanish. That’s not a random choice. Those are the languages the Meadows kids could someday study as Vigo County high schoolers. Ewen studied French throughout her years at South, and wishes she’d learned some of the language in her younger years.

“The world is definitely bigger than just Terre Haute,” Ewen said. “And there are so many businesses that are incorporated into our everyday life, and those businesses aren’t just in Terre Haute.”

Thus, the ability to speak a second language, or more, may continue through her life. She’ll be able to understand business terminology based on French words, and read labels and documents.

“It was amazing,” Ewen said.

“It’s just one of the Japanese businesses that have totally affected the communities in Indiana,” she said.

As for the designs added to the play area at Meadows School, that artwork by Ewen and her friends will occupy youngsters through this unusual year and long afterward. She’s focusing on the future, for her hometown and others.

“You have to work as a community to get back to whatever your normal is,” Ewen said. “Now, the new normal is wearing masks. But if everyone in your community participates, hopefully we’ll get back to normal sooner than later.”