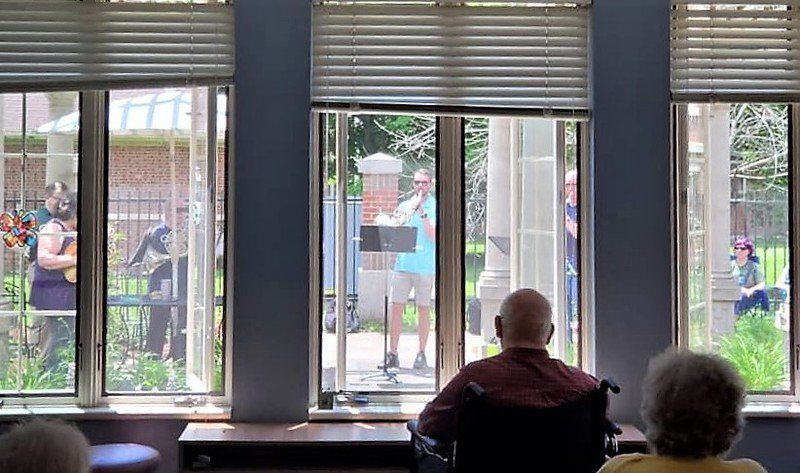 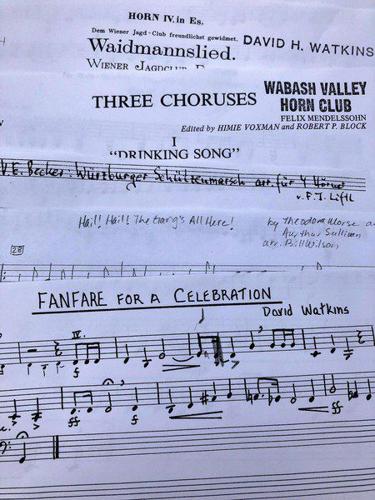 Familiar numbers: Longtime Indiana State University music professor and horn player David Watkins composed and arranged many songs during his career. Fellow horn players played some of those tunes for him during a mini-concert at the Providence Health Care facility earlier this month. 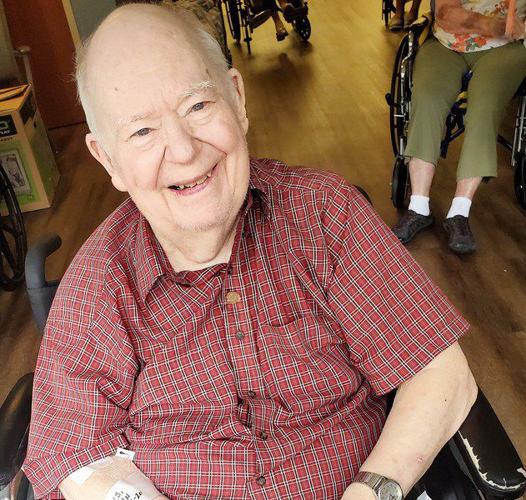 Pleased: Throughout a mini-concert by his former students and colleagues, retired music professor and horn player David Watkins smiled. The musicians serenaded him and fellow residents of the Providence Health Care facility at Saint Mary-of-the-Woods earlier this month. 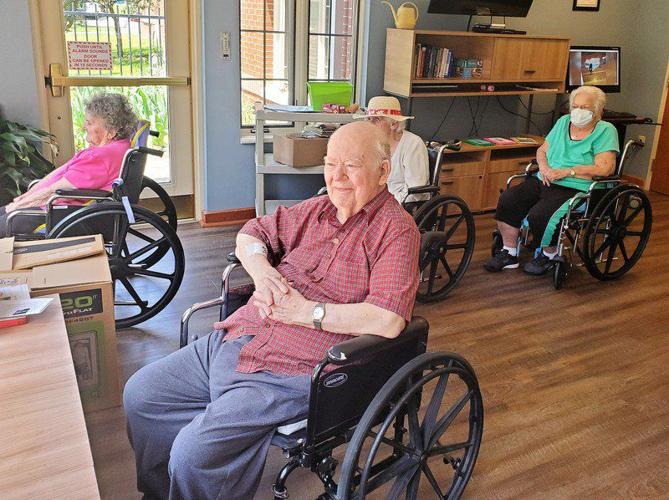 Enjoying the tunes: David Watkins (front) and fellow residents of the Providence Health Care facility at Saint Mary-of-the-Woods listen to musicians performing outside the windows of the activities room. 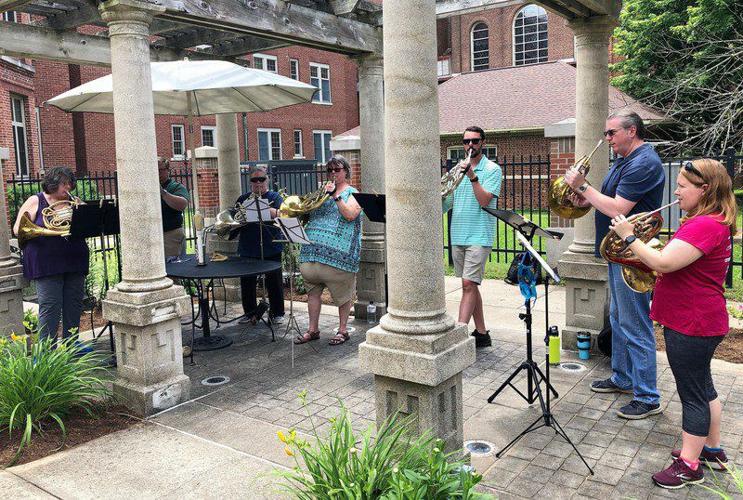 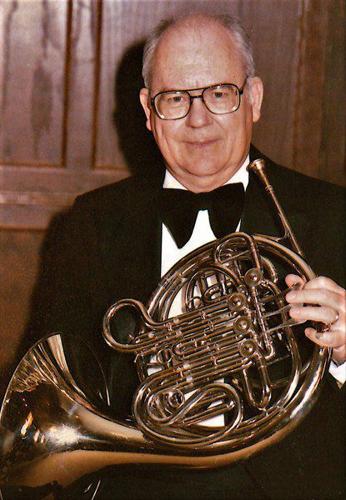 Fixture: David Watkins played horn with the Terre Haute Symphony Orchestra through four decades. He also served on the Indiana State University music faculty from 1964 to 1997.

Familiar numbers: Longtime Indiana State University music professor and horn player David Watkins composed and arranged many songs during his career. Fellow horn players played some of those tunes for him during a mini-concert at the Providence Health Care facility earlier this month.

As the 5-year-old son of a poor Texas sharecropper, Watkins’ parents received a piano from his grandparents in the late 1930s. The gift altered the boy’s destiny. He quickly learned to play it. A natural. Music became Watkins’ career and passion, continuing into the 21st century.

Earlier this month, music — a gift that keeps on giving — gave again, for Watkins.

The retired Indiana State University music professor, now a resident of the Providence Health Care facility at Saint Mary-of-the-Woods, enjoyed a serenade by an ensemble of seven former students and fellow musicians. Because of restrictions to prevent spread of the COVID-19 coronavirus, the group of French horn players stood outside the windows of the facility’s activities center. Shaded from the June heat by an arbor overhead, they performed seven songs, including some of Watkins’ compositions and arrangements.

Despite some hearing and memory loss, Watkins clearly liked the sounds. He sat grinning from his wheelchair. Several of his fellow residents joined him in the room to listen, too.

“We got to play for all of them,” said Jennifer McDaniels, an ensemble member who studied under Watkins and his wife Nancy at ISU in the 1980s. “He was front and center, and smiling ear to ear.”

Watkins fell late last month, prompting the 86-year-old’s move into Providence. Word spread through local music circles. Within days, musicians who’d played alongside or studied under Watkins assembled an ensemble of French horn players. They’d been idled from performances since the pandemic shut down large gatherings throughout Indiana and Illinois in March.

Likewise, those same public health concerns also have curtailed visits to nursing homes and assisted living facilities. “Window visits” are among the doable options, along with virtual visits through online video conferencing platforms such as FaceTime or Zoom.

Watkins’ former students “might have been thinking, ‘What can we do for him?’” Nancy Watkins speculated. “And when you’re a musician, music is what comes to mind first.”

So, the Providence staff helped Watkins’ friends arrange a musical window visit on a Saturday, June 6. Seven horn players gathered in the outdoors arbor area, with Watkins and other residents watching through the window screens in the activities room.

They opened with “Hail, Hail, The Gang’s All Here” and “For He’s a Jolly-Good Fellow.” They followed with “The Drinking Song” by German composer Felix Mendelssohn, a few classical horn pieces and Watkins’ own “Fanfare for a Celebration.” Even though the horn players hadn’t played together for months, their performance sparked a bit of audience participation.

“To see Mr. Watkins and others singing along, tapping their feet and clapping was just great,” said Allie Lark, marketing specialist for Providence Health Care at Saint Mary-of-the Woods.

Windows, walls and 30 feet of social distancing couldn’t dampen the residents’ appreciation for the music, especially after months of coronavirus limitations.

“We haven’t been able to have the same activities and things to do out here because of this pandemic situation,” Lark said. “So, [the concert] meant more to our residents than it typically would.”

Just two weeks ago, Indiana’s reopening guidelines allowed Providence to begin outdoors visitations — by appointment only and at proper social distancing, Lark explained of the facility that serves 70 patients in rehab and long-term care and another 30 in assisted living.

Like the little concert, Nancy’s visits with her husband had been through the windows of his room. He still reads the newspaper and books. Providence staffers have told Nancy that David has played the piano a few times.

Of course, music and students hold a special place in Watkins’ heart. He taught hundreds of young people the finer points of French horn playing, and music literature at ISU from 1965 to 1997, before retiring. He continued composing, including “A Wabash Portrait” — his blending of four historic songs about the river, commissioned by the city of Terre Haute in 1991 and revived for the 2013 Year of the River celebration.

Watkins performed himself, too, playing horn in ISU bands, the Terre Haute Community Band and, notably, the Terre Haute Symphony Orchestra for four decades, alongside his wife, also a horn player.

“In a situation where we could’ve been competitive, he was very supportive,” Nancy said, “and we worked together real well.”

He encouraged students such as Luann Modesitt, too. She played French horn and viola in Terre Haute South High School ensembles in the early 2000s when she met Watkins. Modesitt needed a pianist to accompany her solo performances, and Watkins has played piano since, well, the day his grandparents dropped off their old piano at his Texas home 81 years ago.

Years later, Modesitt got to play alongside Watkins — more than a half-century her senior — in the Community Band horn section. He was still the same “absolutely amazing musician” and affable guy, she said.

“He can always make me smile,” Modesitt said, “and he makes you feel like you’re a talented musician, even when you mess up. He’s just a kind and caring man who deserves so much. So, we wanted to bring that music to him.”

Through that nursing home window, Modesitt could tell Watkins enjoyed their performance.

“The power of music sometimes amazes me,” she said.