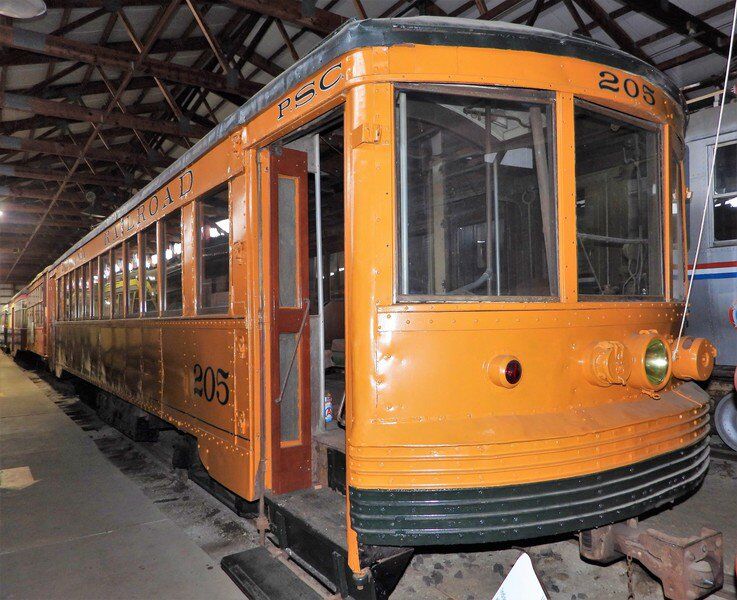 Long view: Streetcar 205 sits in preservation inside a cavernous barn, alongside similar early 20th-century machines, at the Illinois Railway Museum in the small town of Union, an hour northwest of Chicago. 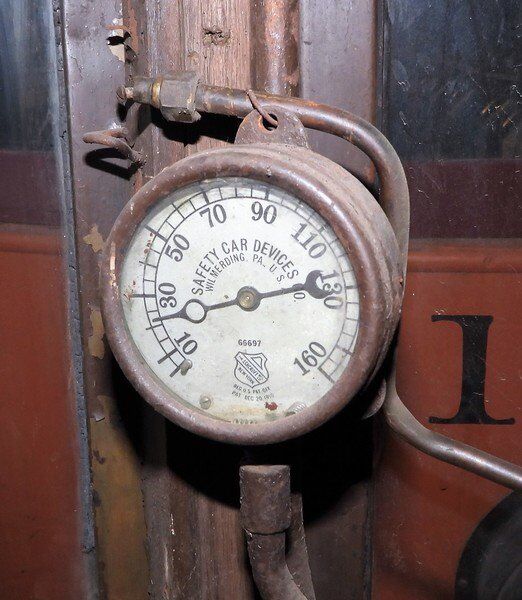 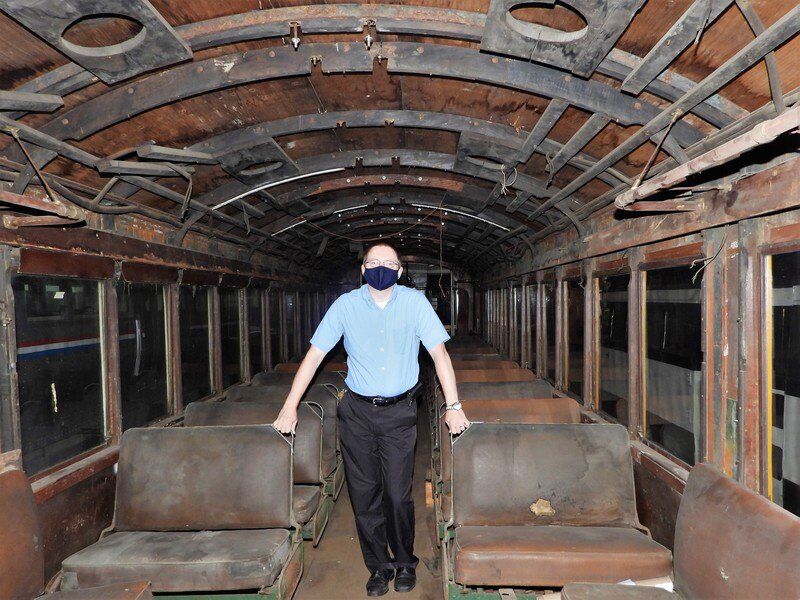 Inside: Streetcar 205 sits in preservation inside a cavernous barn, alongside similar early 20th-century machines, at the Illinois Railway Museum in the small town of Union, an hour northwest of Chicago. 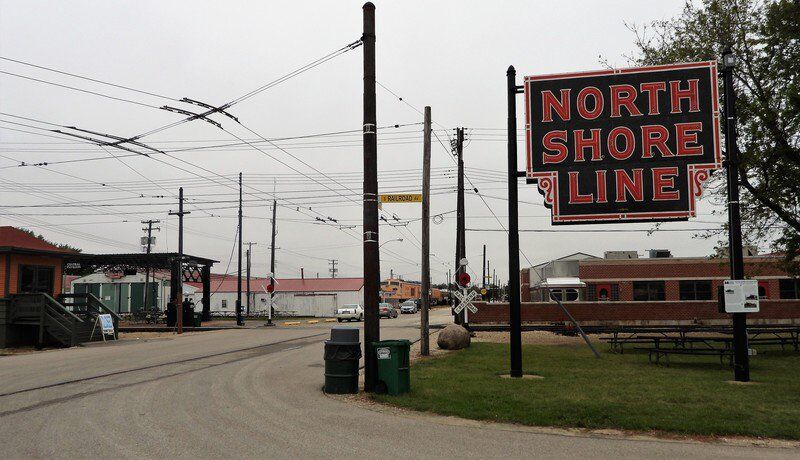 Hub: The Illinois Railway Museum is the largest of its kind in the world. Located near Chicago in the community of Union, the museum features 450 cars from trains, interurbans, suburbans and streetcars. 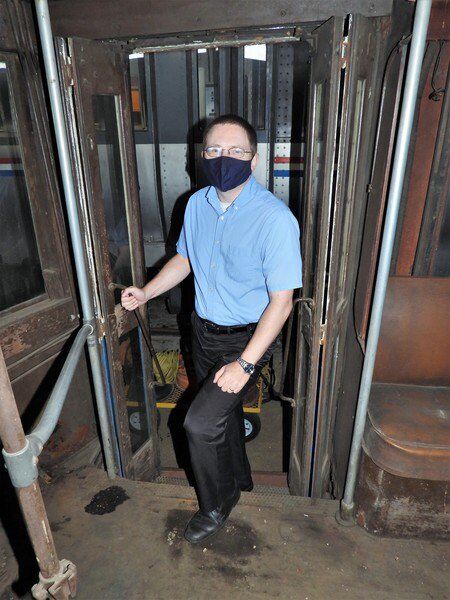 Entering: Passengers on the Terre Haute streetcars in the late 1930s boarded in the middle of a street, where the rail tracks and overhead electrical wires were located. Indiana Railway Museum volunteer Frank Hicks stands on steps that thousands of Hauteans once used. 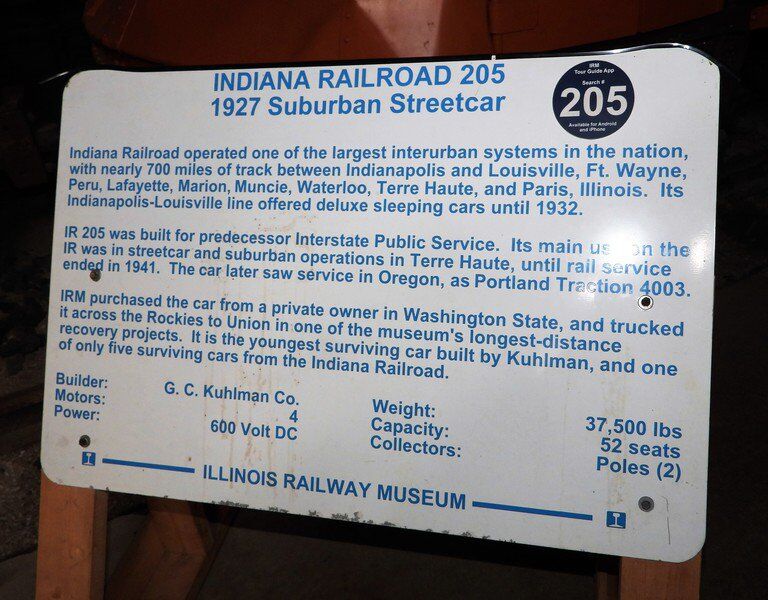 Background: A sign explains the history of Car No. 205, which once toured the streets of Terre Haute. The car is one of only two Terre Haute streetcars still in existence, according to the Illinois Railway Museum. 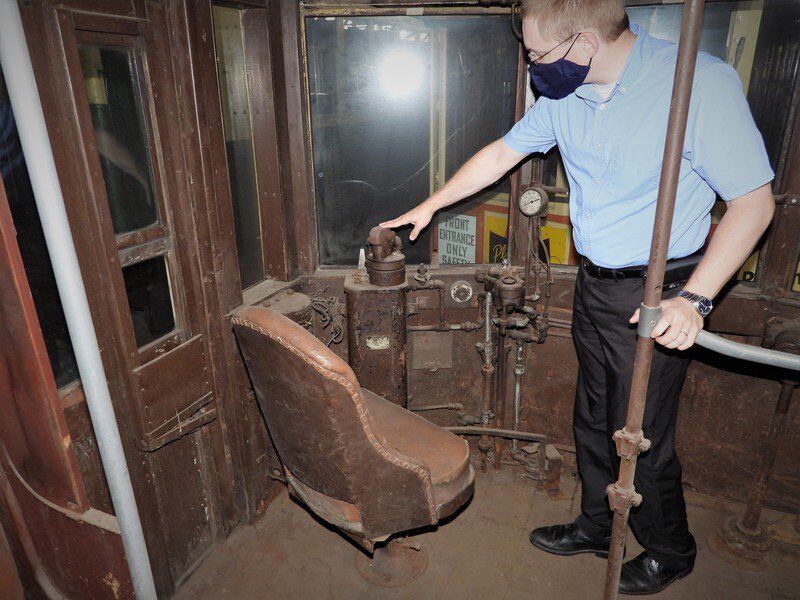 The controls: Indiana Railway Museum volunteer Frank Hicks points out the controls on Car No. 205. 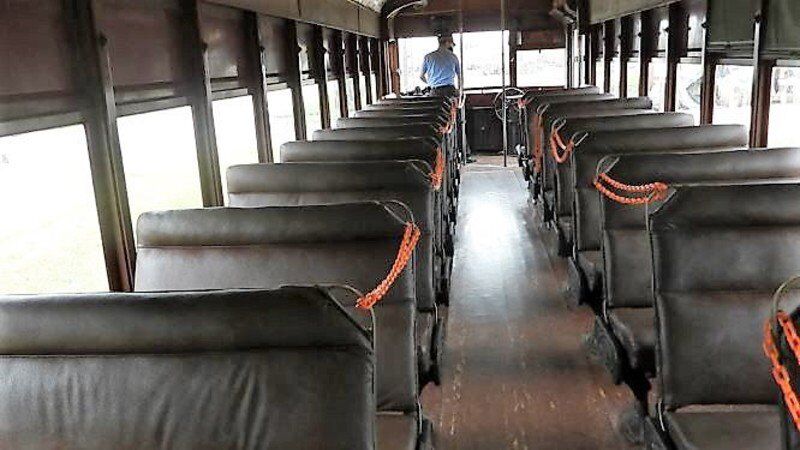 Let’s ride: Frank Hicks drives an operational streetcar at the Illinois Railway Museum. This fully restored streetcar is similar to another kept at the museum, one that formerly serviced the streets of Terre Haute. 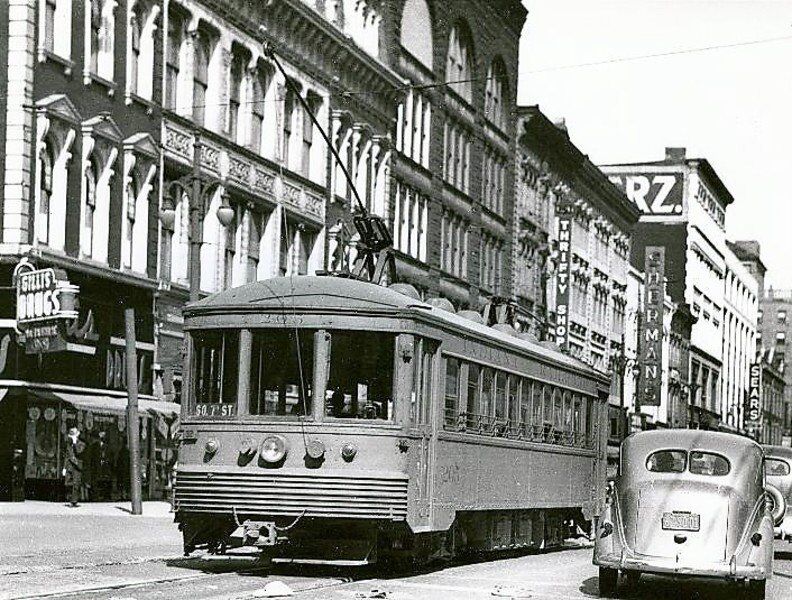 In its heyday: Car 205, a streetcar in the Indiana Railroad’s Terre Haute system, rolls down Wabash Avenue in April 1939. By June, streetcars disappeared from local streets, replaced by buses. Car 205 (above and at right) is now preserved, with its exterior restored, in the Illinois Railway Museum in Union, near Chicago. 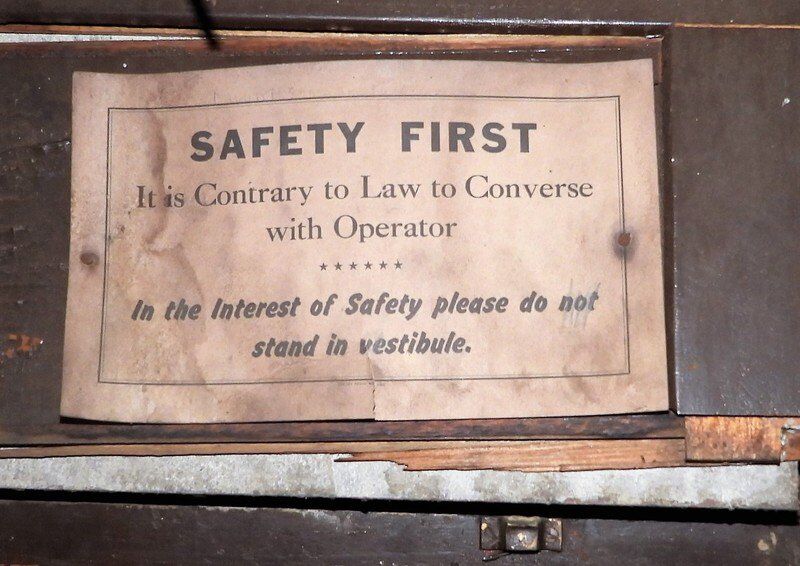 Tribune-Star/Mark BennettTop priority: A “Safety First” sign hangs above the motorman’s area at the front of the streetcar.

Long view: Streetcar 205 sits in preservation inside a cavernous barn, alongside similar early 20th-century machines, at the Illinois Railway Museum in the small town of Union, an hour northwest of Chicago.

The controls: Indiana Railway Museum volunteer Frank Hicks points out the controls on Car No. 205.

Tribune-Star/Mark BennettTop priority: A “Safety First” sign hangs above the motorman’s area at the front of the streetcar.

Hundreds of Hauteans once sat in those leatherette seats, as passengers on Indiana Railroad’s Car No. 205.

Some rode that streetcar to and from jobs at riverfront factories. Other riders went shopping on Wabash Avenue. Many climbed aboard to take a date to a movie at one of several Terre Haute theaters, buy groceries at corner markets, attend a funeral or get drinks at a nightclub.

“It would just run down the middle of the streets,” explained Frank Hicks, a long-time volunteer at the Illinois Railway Museum.

Hicks, suited up in a conductor’s uniform and cap, strode through the now empty aisle of Car 205 on a cool Wednesday morning earlier this month.

Silence and shadows from the dim light inside the streetcar enhanced its bygone feel, more than 80 years after its last run on the streets of Terre Haute.

If those wood and metal walls could speak ...

They can’t, of course. So Hicks and fellow volunteers at the museum provide the historical tales.

Today, the streetcar sits in preservation inside a cavernous barn, alongside similar early 20th-century machines, at the Illinois Railway Museum in the small town of Union, an hour northwest of Chicago. Hicks has served as a museum volunteer for a quarter-century, along with his father. Hicks helped restore Car 205, one of six streetcars that serviced Terre Haute from 1936 to ‘39.

Streetcars then disappeared from Terre Haute. Cheaper buses replaced them.

Car 205 is one of only two surviving Terre Haute streetcars. And it’s the only one preserved as it looked in Terre Haute.

The Illinois Railway Museum bought the streetcar in 1993 “to make sure it wasn’t lost,” Hicks said. Indeed, the museum rescued it from the rainy weather of rural Washington. It had sat in a forest for nearly three decades. Its last 18 years of activity were spent as Car No. 4003 on the streets of Portland, Oregon, from 1940 to ‘58.

The museum bought the car and restored its exterior to its original orange and dark green, instead of the dark blue and carmine red Portland colors. It also now wears its Indiana Railroad number, 205.

“It looks like it did in Terre Haute because we’re a Midwestern museum,” Hicks said.

Car 205 lived multiple lives, with different numbers, owners and color schemes. Built in 1927 at Cleveland’s G.C. Kuhlman Car Company, the streetcar and five others initially operated in Louisville, Kentucky, running routes to the Indiana towns of Jeffersonville and New Albany across the Ohio River until 1934. Car 205 and its sibling vehicles then sat idle in storage in Scottsburg until the Indiana Railroad decided to modernize them for inner-city duty in Terre Haute. Mechanics in Anderson did the upgrades.

Passengers paid 5 cents a ride in Terre Haute, according to the Vigo County Public Library archives. Streetcars arrived at their appointed stops every 10 to 15 minutes.

The streetcars picked up passengers at the intersection of Locust and North Sixth streets, near Bill Welch’s home in the 1930s.

When they had enough money for fares, “once in a while I’d get on a streetcar with my mom to go some place,” said Welch, now 96 and retired from a legendary high school teaching and coaching career. Youngsters in Welch’s neighborhood occasionally hopped on back of the streetcars, sneaking a ride for a block or two. At the time, North Sixth Street was a dirt road.

Like Welch, Lea Reyher remembers “mischievous boys” climbing atop the streetcars and yanking off the trolley poles that transferred electrical power from the overhead cables to the cars’ traction motors. “The driver would have to get out and put it back on line,” Reyher recalled, and were “not happy, I’m sure.”

Reyher, a 94-year-old Terre Haute retiree, lived on Fifth Avenue on the city’s north side with her grandparents in the 1930s. A streetcar stop was a few blocks from their home. Reyher would run to the stop, catch the streetcar and ride to a job downtown.

“The drivers would wait on me a few minutes if I ran a bit late,” she said. That streetcar had the “same drivers on the same shifts for years, and they knew all their passengers like family.”

Streetcars first rolled through Terre Haute in the late 1800s, replacing horse-drawn carts on the mass transit continuum. Populations in cities such as Terre Haute could spread out.

“Streetcars were one of the devices that allowed cities to expand,” Hicks said. “Once you had mass transit, now you could have people live five miles from where they worked and take the streetcar.”

Those machines trekked along rail lines, drawing power from overhead electrical cables through a rod atop the streetcars. The electricity powered motors on each of Car 205’s four axles.

Structurally, streetcars resembled the fabled interurban cars, but both had some different mechanical elements, Hicks said. Most significantly, interurban cars were designed for longer trips from city to city at speeds of 40 to 60 mph. Streetcars were built to hit top speeds of 25 to 35 mph on shorter journeys within a single urban center. Car 205 and its five companions stayed within the Terre Haute city limits as streetcars, while local interurban cars carried passengers to Clinton, Sullivan, Indianapolis and Paris, Illinois.

Interurban cars also used a two-man crew. Streetcars had just a single motorman at the controls. The lone operator format caused designers to equip streetcars with a “dead man” device on the acceleration handle. If the driver suffered a heart attack and let loose, his abrupt release immediately stalled the car.

Like the interurban, streetcars also “ran equally well in either direction,” Hicks said, sitting in the motorman’s seat.

Welch recalled the streetcar network “covered the city pretty well. That was the way downtown, if you didn’t walk. It was good transportation.”

Streetcars ran east and west through Wabash Avenue. Wabash bustled with traffic, from both streetcars and the burgeoning automobiles, especially on weekends. Perhaps the busiest moment for streetcars came on game days for the Terre Haute minor league baseball team that played on East Wabash at Memorial Stadium.

“It was standing room only going out to the ballpark,” Welch said.

Streetcars began fading from the nation’s streets about the same time Car 205 debuted in Terre Haute. With America mired in the economic disaster of the Great Depression, many streetcar manufacturers went out of business. Kulhman, maker of Car 205, ceased operations by 1932. Car 205 is the youngest surviving Kuhlman-built streetcar.

Despite the manufacturers’ demise, Hauteans relied on the existing streetcars during that hard economic time. “That was the transportation for most people, because most families didn’t have a car,” Welch said.

By 1941, the Indiana Railroad was defunct. Automobiles gained popularity and surged after World War II. Cities such as Terre Haute paved over the streetcar tracks to adapt roads for cars, buses and trucks. The old tracks have been dug up and removed to smooth the streets during the 21st century.

The only other Terre Haute streetcar still in existence sits in a California museum, fully restored but in the colors and fittings used in its latter years in Portland. Car 205 at the Illinois Railway Museum isn’t operational. Such a renovation would require rebuilding motors for each of its four axles, an effort that would cost $20,000 or more for each one, Hicks said. A total makeover would cost $500,000 or more.

Still, it rests with fresh paint and equipment on its exterior. “I can’t tell you how much Bondo there is in the thing,” Hicks said.

The car is shielded from the weather and ready for visitors to the museum — the largest of its kind in the world. It’s a fitting destination, given that Chicago is America’s rail hub and Midwestern cities such as Terre Haute are mainstays in the country’s rail legacy.

Museum visitors can ride a fully functional streetcar similar to Car 205. Advertising signs for Lux soap and soda pops line its curved ceiling. Hicks gave me a ride on my visit earlier this month. He even let me take the controls for a lap around the museum’s campus. The air brakes and doors hiss when activated. Hicks had to climb outside the driver’s window to connect the trolley pole to the line above.

It felt complicated yet simple, and antiquated yet ingenious. Riding a streetcar is a lesson in how we got to where we are today.

How to see it

TERRE HAUTE [mdash] Mindy R. Wilkinson, 39, passed away May 1, 2020 in Terre Haute. She was born January 20, 1981 in Okinawa, Japan, to Felix Earl Wilkinson and Joy Hooten. Mindy loved to go mushroom hunting, and spend her time at Turkey Run State Park. She is survived by her mother, Joy Dej…