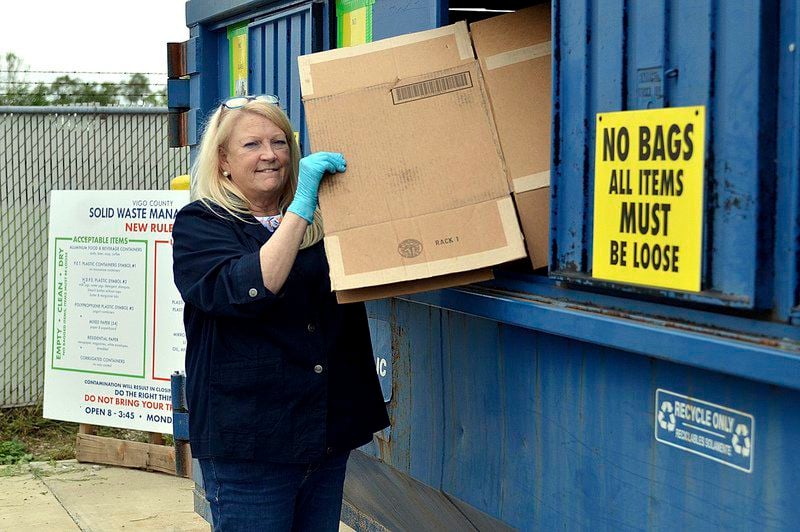 Tribune-Star/Joseph C. Garza No trash, just recyclables: Kathy Kinney, executive director of the Vigo County Solid Waster District, wants to remind residents that only clean recyclables can be put into the district’s recycle bin off of Haythorne Avenue. 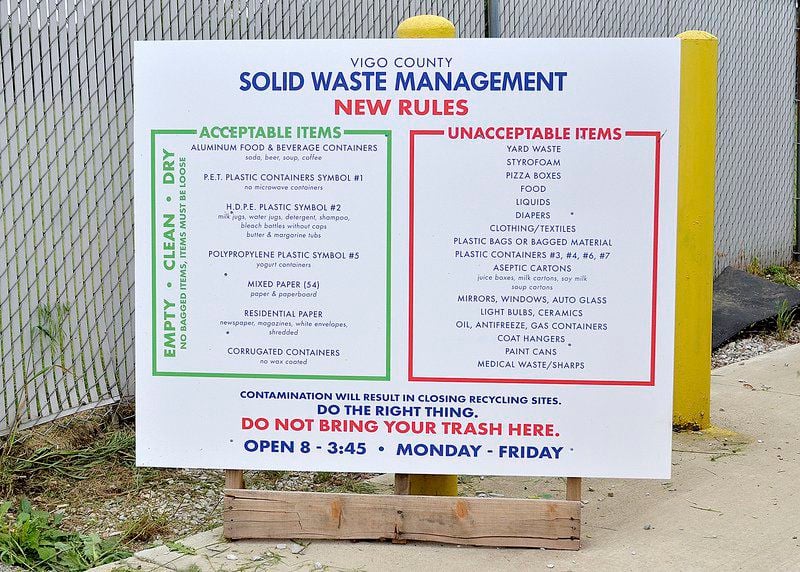 Tribune-Star/Joseph C. Garza New rules: A sign tells patrons at the Vigo County Solid Waste District of which materials they can and cannot recycle on Thursday off of Haythorne Avenue.

Vigo Countians who recycle probably have filled their home containers beyond the brim in the past 50 days.

Their cans, bottles, plastics and paper had nowhere to go. Like many services across Indiana and the nation, local recycling centers shut down as actions were taken to curtail the spread of the COVID-19 coronavirus pandemic. That included the two recycling outlets in Vigo County — the Indiana State University Recycling Center on campus and the Vigo County Solid Waste Management District office on Haythorne Avenue.

Last week, the Solid Waste District center reopened, after being closed since March 24. It’s open 8 a.m. to 3:45 p.m. Monday through Friday, and there is no charge to drop off recyclables. Meanwhile, ISU’s facility remains closed indefinitely.

Now, as the lone recycling drop-off option, the Solid Waste District site is getting overwhelmed with recyclables, said Kathy Kinney, its executive director.

An equally large complication has been the number of people putting trash in the center’s recycling bin. In fact, lots of people stuffed garbage into the recycling bin during the center’s coronavirus closure. That forced the dumpster’s first emptying last week to go to the county landfill, instead of the usual processing center in Indianapolis, Kinney said.

Trash and recyclables aren’t the same. For the recycling process to work at the Solid Waste District center, the dropped off items must be empty, clean and dry — and among those on a list of acceptable recyclables, Kinney emphasized. Trash, unacceptable items and unclean recyclables can taint an entire bin of clean recyclables. A plastic salad dressing bottle, for example, is only acceptable if it’s been washed.

“Anything with food on it can’t go in there,” she explained. Thus, any pizza boxes are not permitted.

A container of motor oil — which isn’t acceptable anyway — once got tossed in the center’s bin, coating and spoiling other clean items.

Kinney manages the site solo. She tries to educate the public on recycling and the center’s guidelines.

“I have a lot of wonderful people who want to recycle and do the right thing,” Kinney said Tuesday. “And then I have others who just want to get rid of their stuff.”

The high volume of empty, clean and dry acceptable recyclables also has been a challenge since the reopening. The center typically had its bins emptied twice weekly by Republic Services. With the expectation of county residents having pent-up recyclables, the pick-ups were increased to three times a week at reopening time. The bins filled quickly, and Kinney had to tell residents they’d have to come back the next day.

Now, the center is having the bins emptied daily.

Kinney is concerned the additional pick-ups will deplete the district’s budget for recycling education in the schools and community, township cleanups, electronic waste cleanups, and the annual Tox Away, White Goods Collection Day.

“We can’t service this whole county,” Kinney said. “We have to determine if we can continue to do this, if ISU doesn’t open.”

The ISU Recycling Center on North Ninth Street remains closed, with no target date for reopening made public yet. “To help prevent the spread of COVID-19, ISU officials decided to keep the Recycling Center Drive-Through closed at least until we reevaluate in the summer,” said Mark Alesia, the university’s director of communication.

The city of Terre Haute also hosts two single-stream recycling dumpsters on the City Hall campus, which are emptied daily and have been “heavily used ever since the ISU Recycling Center shut down,” Mayor Duke Bennett said Friday. If ISU reopens, that facility’s availability, along with the Solid Waste District site and the City Hall bins should adequately “handle the local volume,” he added. The mayor also is concerned the recycling market, in general, is struggling and could inhibit the city’s ability to maintain the free drop-off recycling service at City Hall.

Recycling reusable goods benefits the community and its environment. The Solid Waste District center took in 21.47 tons of recyclables from March 1 to 24, when the site temporarily closed for pandemic precautions. “We’re keeping that out of the landfill,” Kinney said.

Brendan Kearns, a county commissioner and Solid Waste District board member, has monitored the situation and understands the added pressure on the center, with the ISU center closed for now.

Part of the increased volume of drop-offs at the Solid Waste District center comes from an uptick in people ordering carryout meals during the pandemic, Kearns said. The plastic and aluminum containers for those meals add up in the center’s bins. And, residents need to wash and dry them thoroughly before dropping them off.

“They have to be completely clean in order to be considered a viable item” to be recycled, Kearns said.

Such containers can be repurposed at home. Kearns said his family uses the restaurant pans as seed-starter containers.

The district’s township cleanups help the process, too. A cleanup in Prairieton for township residents last Saturday collected 450 pounds of recyclables, as well as refuse in a separate dumpster, Kinney said.

Responsible recycling and waste disposal practices are important for the community, especially in this unsettled time. Patience doesn’t hurt, either.

• Cost: There is no charge to drop off recyclables.