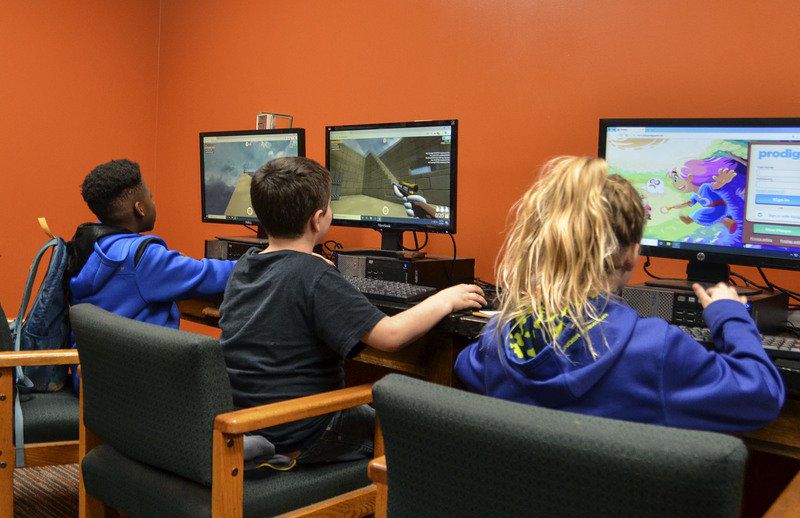 Tribune-Star/Austen LeakeEntertained: Kids at Ryves Hall Youth Center can utilize the computer lab after school to play games or do homework. 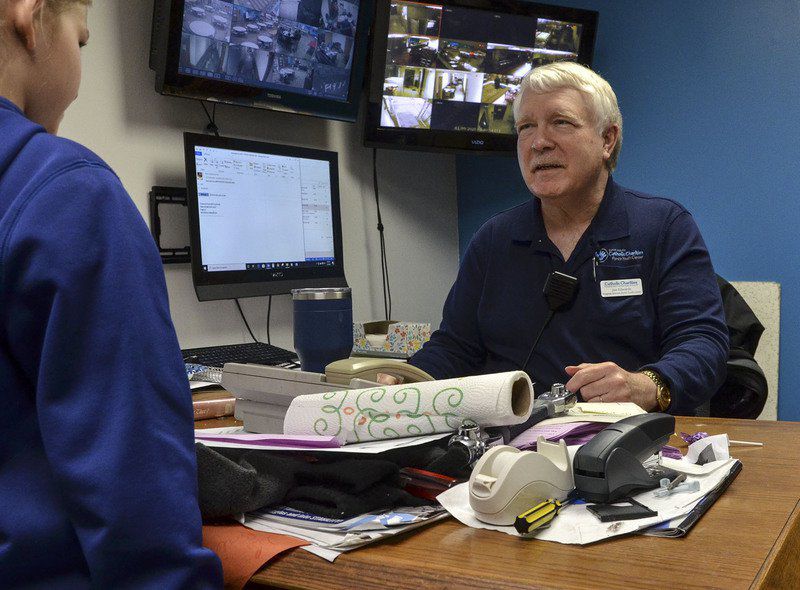 Tribune-Star/Austen LeakeHappy to help: Jim Edwards, director of the Ryves Hall Youth Center, talks to a child in his office on Thursday afternoon.

A single mom loses her job and misses rent payments. A dad gets ill and medical bills mount. A couple splits up. The car a young mom relies on to get to work breaks down. A family’s house burns to the ground.

Any of those situations, and others, could result in a family being without a home. That includes kids who are students at elementary schools, middle schools or high schools. Youngsters and their families may move in with another family. Or into a shelter. Or into a series of relatives’ homes. Or in some cases, even outdoors.

Kids in those situations have an extra hard time focusing on homework, school projects and staying alert in their classrooms.

Twice as many Hoosier school children live in that situation today than a decade ago. More recently, the statewide total climbed from 13,810 in the 2015-16 school year to 14,914 in 2017-18, according to Indiana Department of Education figures.

Rick Stevens isn’t surprised by that increase. He’s worked with children and families in that situation throughout his 40 years with the Vigo County School Corp. as a teacher, administrator, dean, principal and, for the last eight years, an even more specialized role.

Stevens, who is retiring at the end of this month, assists families and schoolchildren in homeless situations with school-related predicaments, like arranging transportation to the school a student attended before the family was displaced and forced into a shelter or temporary home in another school’s district.

Like elsewhere in Indiana, Vigo County’s share of homeless students isn’t decreasing. “A lot of people live check by check,” Stevens said. “And, if you miss a check or lose a job, that can affect a kid very quickly.”

Four-hundred and 44 students in VCSC schools classified as homeless in 2018-19, according to the VCSC. The total has fluctuated through the past several years, but has risen from 338 in 2013-14.

Homeless statistics vary, depending on what criteria the counters use to determine student homelessness. The upcoming annual Point In Time Count by the U.S. Department of Housing and Urban Development on Jan. 22, for example, focuses on people in shelters, transitional housing or on the streets.

The definition of homelessness, according to the McKinney-Vento Homeless Assistance Act signed into law in 1987 by President Ronald Reagan, involves more situations than having to sleep outdoors. A child classifies as homeless if their nighttime residence isn’t fixed, regular or adequate, according to that law. The same is true if a child’s family is “doubling up,” or living in another family’s home because of an economic hardship, or if the family moves into a hotel, trailer park or campground because they don’t have an adequate alternative.

“Homelessness is not just living on the street,” said Gina Woodward, the IDOE’s homeless education specialist.

Of course, each statistic in any count represents a young person, facing the difficulty of being a student and homeless.

“Can you imagine going to school and not knowing if you’re going to be living at the same place when you’re done with school?” said Jim Edwards, director at Ryves Youth Center at Etling Hall. That nonprofit facility stands at 14th and Locust streets as a destination for needy kids, many of whom classify as homeless.

“Oh, sure, sure,” Edwards said, when asked if he and the staff routinely work with homeless kids. “That’s an everyday thing.”

Ryves’ doors are open to kids and families throughout the day. The Terre Haute Catholic Charities facility offers preschool for youngsters who are homeless or on the brink of it, after-school activities for older kids, tutoring, snacks, foster grandparenting, a computer lab, rollerskating, basketball and meals.

Youngsters also need empathy, not pity, from adults around them, Edwards said. Consideration matters, too. “The homeless issue is just a huge problem that people do not understand,” he added.

Kids and their families needing shelter may find it at Bethany House, a Terre Haute Catholic Charities shelter for women with children, married couples with children and single women. Each case differs, said Danielle Elkins, the shelter’s director and the co-chair of the Homeless Council of the Wabash Valley.

A family’s homelessness could be the result of a job loss, a parent’s release from prison, addictions, marital disputes, or mental and physical hardships. Sometimes, a child’s parent can’t, or won’t, work a job to pay residential bills, Elkins explained. Or, a family may have “exhausted” a relative or friend that had taken them in.

“It could be anyone, a paycheck away” from losing a residence, Elkins said.

A disrupted living situation affects a school kid’s progress. “Every time that family moves, it puts a six-month developmental delay on a child,” she said.

Bethany House’s 60-day program offers residents life-skills classes on budgeting, parenting, accountability, personal boundaries and laundry, and get information about wrap-around services offered elsewhere, such as through Hamilton Center. Families at Bethany House also learn to shop for food, cook it, dine together with other resident families, and clean up the dishes afterward. Such scenarios may be brand new to a child, watching. Kids also get firm bedtimes, homework help and reminders the staff cares about them.

“We’ve got to educate the little ones, so they can become more successful adults and break the cycle,” Elkins said.

Stopping generational poverty not only betters the lives of a particular family, but also the community around it. Children who experience homelessness are 150% more likely than others to be homeless as adults, said Woodward at the IDOE. And if a homeless child’s academic progress breaks down, their odds of finding a brighter future steepen. People without a high school diploma are four times as likely to be homeless.

Along with the human toll, generational poverty and homelessness also weaken the local workforce and put stress on a community’s ability to provide relief services.

“So, it’s very important for us to intervene early,” Woodward said.

Stevens serves as the VCSC’s McKinney-Vento liaison, a role ascribed by the federal law to school districts. He helps arrange services for families and kids in homeless situations, from immediate enrollment in a school to free school breakfasts, lunches and textbooks, as well as working with other VCSC staff such as counselors and the transportation crew. A sense of stability for a child is the goal.

A child can wind up homeless, even if they’d never been needy before. “Just remember,” Stevens said, “homelessness can still cut across all socioeconomic groups in our community, not just students already living in poverty.”

The VCSC received a grant through the McKinney-Vento program for the 2019-20 school year — one of 33 distributed in Indiana, the IDOE reports. It helps fund services to homeless students. Indiana school districts also must set aside portions of federal Title I funds for homeless students, Woodward said.

The problem isn’t abating, as the steadily increasing numbers statewide and locally show. More diligent detection of students’ homelessness may contribute to the rise. It’s not always simple to deduce a child is homeless. Students may be embarrassed to reveal their homelessness to school staff, or reluctant because a parent has instructed them to conceal the situation for fear of losing custody, said Edwards at Ryves Youth Center.

About 1.5% of the state’s school children classify as homeless, which is close to nationwide figure of 1.8%.

Last year, a state task force compiled the “Homeless Remediation Plan” for 2019-2020 for the IDOE. It outlines seven primary goals to address the problems, from creating incentives for community action to collaboration by communities within a region, intensifying services to high-risk teens, and bolstering tools to connect a homeless child with the best school and transportation situations, among other steps.