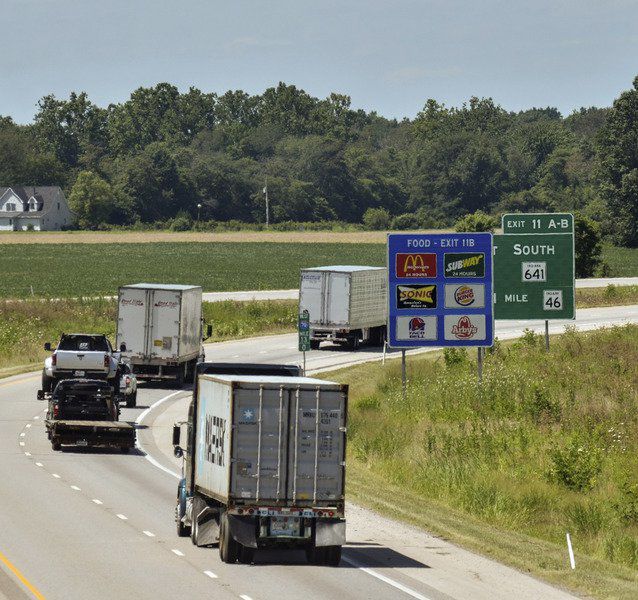 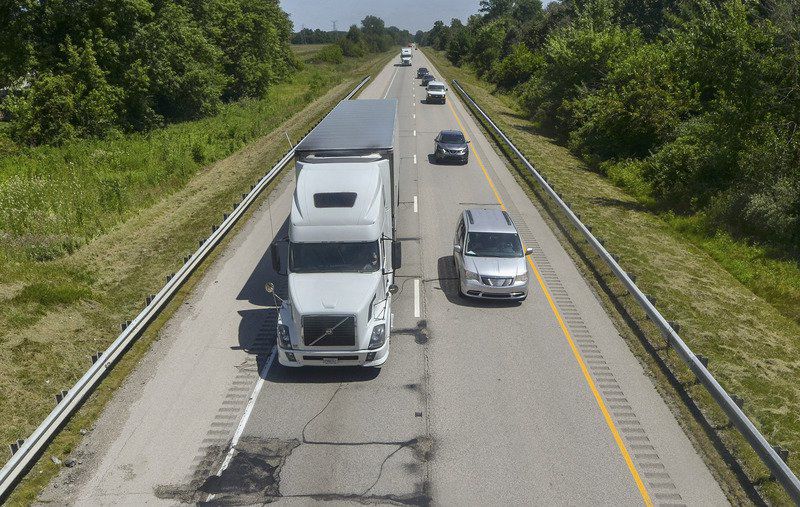 Tribune-Star/Austen LeakeTreacherous: Many Wabash Valley residents avoid Interstate 70 due to the rash of fatal accidents over the past few years. 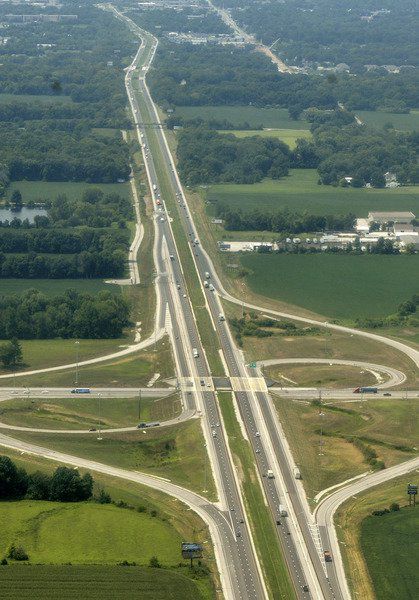 Tribune-Star/Austen Leake View from above: An aerial view of Interstate 70's exit 11 taken on August 10, 2018.

Source: Indiana Department of TransportationOne-year numbers: This graphic indicates that Interstate 70 west of Indianapolis has been safer — in total crashes per mile and serious and fatal crashes per mile — than "peer rural interstate segments" in Indiana, according to the state Department of Transportation's Scott Manning. The numbers come in contrast to public concerns about recent and past crashes on I-70.

Tribune-Star/Austen LeakeTreacherous: Many Wabash Valley residents avoid Interstate 70 due to the rash of fatal accidents over the past few years.

Tribune-Star/Austen Leake View from above: An aerial view of Interstate 70's exit 11 taken on August 10, 2018.

Source: Indiana Department of TransportationOne-year numbers: This graphic indicates that Interstate 70 west of Indianapolis has been safer — in total crashes per mile and serious and fatal crashes per mile — than "peer rural interstate segments" in Indiana, according to the state Department of Transportation's Scott Manning. The numbers come in contrast to public concerns about recent and past crashes on I-70.

Lots of Wabash Valley residents fear driving on the local stretch of Interstate 70. And with good reason.

Fatal accidents — several involving semi tractor-trailers crashing into stopped or slowed traffic — have become frequent on I-70 between the Illinois-Indiana border and Indianapolis. Accidents along that 68-mile path outnumbered those on the 66-mile portion east of Indy to the Ohio border in 2016 and 2017, according to the Indiana University Public Policy Institute’s statistics. Distracted driving has been cited as a factor in several cases.

Three more fatalities occurred on I-70 west of Indianapolis last month. On Monday, the Vigo County School Corp. announced its buses won’t travel on I-70 “because of the significant number of serious accidents.”

The VCSC doesn’t even want drivers to use I-70 to shuttle buses between schools when students aren’t aboard.

Buses must use alternate routes, such as U.S. 40. It’ll take longer, but as VCSC communications director Bill Riley put it, “Keeping our children safe is one of our basic priorities, and recent news tells us that our children will be safer staying off Interstate 70.”

It wasn’t a snap decision. Superintendent Rob Haworth and fellow administrators reviewed the interstate’s safety problems. “We’ve discussed this for a few weeks,” Riley told the Tribune-Star’s Sue Loughlin. “We can no longer ignore the safety issues on I-70. It’s something weighing on all of our minds.”

Such a smart step has been taken before. In 2011, former superintendent Danny Tanoos restricted bus travel on I-70 because of a spate of accidents involving congested traffic around construction zones.

This shouldn’t be the new normal. Driving on the interstate highway, which Hoosiers pay for, shouldn’t be so risky that thousands of them avoid it completely. Something must change.

Not a quick fix

Adding lanes to I-70 — built through Indiana in the mid-1960s — could improve safety, but such a multi-billion-dollar project couldn’t be approved, undertaken and completed quickly. “It’s not a two- or three-year fix,” said Jeremy Weir, director of transportation planning for the West Central Indiana Economic Development District. Think 15 to 20 years or more.

Adding a third lane in each direction to I-70, border to border, is a long-term goal of the West Central district and the Indiana Department of Transportation, said Weir and Scott Manning, INDOT’s strategic communications director.

Political realities, specifically the unpopular concept of tolling, have stalled the needed reconstruction of I-70 and other Hoosier interstates.

Until an I-70 expansion occurs, short-term measures are needed.

As eastbound drivers approach the Indiana-Illinois border and westbound motorists enter Putnam County, they should encounter multiple, high-visibility warnings of potential slow-downs — with causes varying from a lane blocked by a stalled vehicle to construction work zones. Rumble strips should be installed at every mile marker. Enforcement of texting-while-driving laws and penalties could be stiffened.

Anything to alert every driver to the recurring crashes on that stretch of I-70, and the need to reduce speed, deserves consideration.

Signs signaling extended wait times is one likelihood. “If people know it’s going to take them two hours to get to Indianapolis, they’re going to be less aggressive in their driving,” Weir said last week.

The state sees distracted driving as I-70’s root problem, and not I-70’s structure. “No highway design can overcome poor decision-making by motorists, such as speeding, reckless and distracted driving, which as been the cause of multiple crashes that have happened on I-70 and other routes in Indiana and across the country this year and in recent years,” Manning of INDOT stated last week.

“Our team is confident in the safety of I-70 as it is built today,” Manning said. “Having said that, we routinely look at additional safety measures on an ongoing basis that can reduce the risk of serious or fatal injury crashes,” such as cable barriers.

Manning said INDOT wouldn’t question the Vigo County School Corp.’s decision to route buses away from I-70 to alternate roads, such as U.S. 40. “Certainly, they need to make the decision that’s best for them,” he said. INDOT doesn’t recommend the general public avoid I-70, Manning added.

“The design of the interstate system is inherently better than the four-lane construct of U.S. 40,” Manning emphasized.

And, I-70 west of Indianapolis is statistically considered “uncongested,” Manning said, except for one section in Hendricks County. “‘Uncongested’ does not mean traffic flow isn’t heavy; it means drivers can maintain speed.”

Tolls inevitable to rebuild I-70

Regardless of numerical designations, the persistent roadway tragedies have led the VCSC and many Wabash Valley residents to conclude I-70 isn’t safe, as-is. A plan to markedly change I-70 — as well as I-65 and I-94 in northwest Indiana — stalled late last year, when Gov. Eric Holcomb decided not to implement tolls on those interstates during his time in office.

Tolls of up to 7 cents per mile for cars and 38 cents per mile for semis would’ve generated $15 billion for improvements — including added lanes on I-70 — between 2024 and 2045, the Northwest Times of Indiana reported. INDOT created the plan, which was mandated under Indiana House Enrolled Act 1002, and sponsored by Rep. Ed Soliday, a Valparaiso Republican.

Holcomb said increases in the state fuel tax and vehicle registration fees, approved by the General Assembly in 2017, were enough to support his $4.7-billion, five-year Next Level Roads plan. That amount, though, wasn’t enough to cover the widening of I-70 and I-65 border to border, or the complete rebuilding of significant portions of those half-century-old interstates, a frustrated Soliday told the Times in November.

Prior to Holcomb’s decision, the House-ordered plan formulated by INDOT had one national transportation expert thinking the Hoosier state was ready to be a trailblazer in the long-overdue rebuilding of the aging interstates.

“I was telling everybody that Indiana was going to be the lead state on this,” said Robert Poole, transportation director at the Reason Foundation, a nonpartisan public policy research organization. He saw Holcomb’s back-off of the tolling plan as “shortsighted, but probably politically understandable.”

Poole has advised four presidential administrations on transportation and studied the need for additional lanes on I-70, including segregated, designated truck lanes.

Twelve years ago, the U.S. Department of Transportation studied the feasibility of adding designated truck lanes to 800 miles of I-70 through the “Corridor of the Future” — Missouri, Illinois, Indiana and Ohio. Trucks-only lanes, segregated by concrete “jersey barriers,” would result in a 90 percent reduction in car-truck crashes, the study found, and a 50 percent cut in wrecks in the other general-purpose lanes. “That would be the ideal solution,” Poole said Wednesday by phone from Florida.

An independent study by Poole for the Reason Foundation, using federal highway data, found that without added lanes, increasing national truck traffic will result in semis comprising 55 percent of general traffic on I-70 by 2040.

Fifty-five percent. Picture that on I-70.

“That would not be out of the realm of possibility,” Manning said at INDOT. Currently, trucks make up around 30 percent of I-70’s traffic, he said.

And, the only realistic way to deal with the traffic changes and the needed expansion and rebuilding of I-70 and other American interstates is tolling, Poole said. Reconstruction of the nation’s interstates will be a $1-trillion project, according to findings by the Transportation Research Board, a division of the National Academy of Sciences. The idea of funding such a makeover through state and federal gasoline tax increases “is completely a pipe dream,” Poole said.

If I-70 is going to be transformed into a safer, 21st-century interstate, tolls will inevitably be necessary to pay for it.

“The alternative,” Poole said, “is that the system gets worse and worse.”

TERRE HAUTE [mdash] Norman A. Cooper, 73 of Terre Haute, passed away at 1:35 PM on Wednesday, April 8, 2020 at Westminster Village. He was born in Terre Haute on January 18, 1947 to Arthur Cooper and Clara Lawson Cooper. Norman was a 1965 graduate of Wiley High School and a member of Eighth …