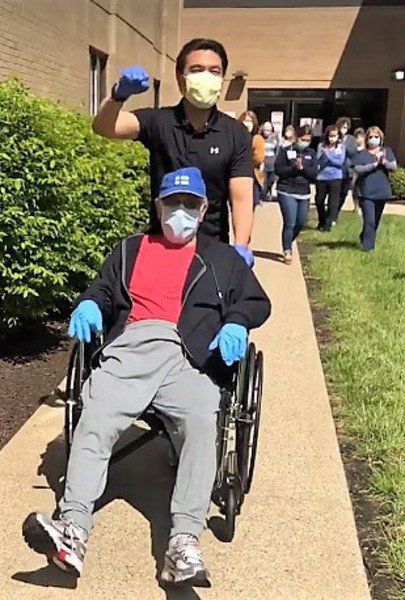 Cheers: Terre Haute Regional Hospital staff members cheer coronavirus survivor Dan Pigg, as he was released on May 8. The Farmersburg resident was hospitalized for 37 days, including 12 on a ventilator.Submitted photo 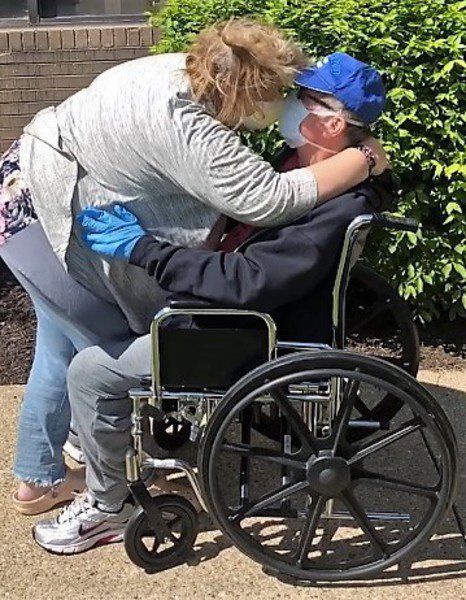 Submitted photoReunited: Tammy Pigg greets her husband, Dan, as he was released May 8 from Regional Hospital. He entered Sullivan County Hospital on April 2, then was transferred to Regional’s intensive care unit, stricken by the COVID-19 coronavirus. 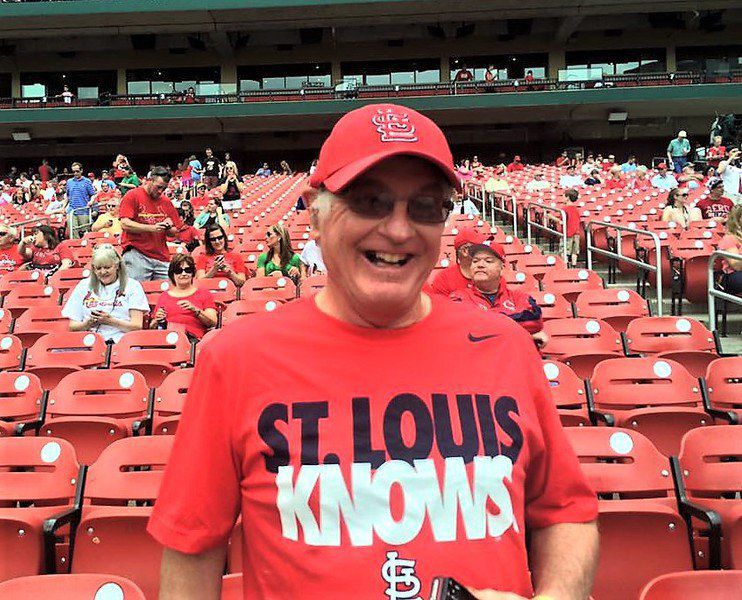 Dan Pigg had been in his happy place — tinkering with a relic tractor in his southern Vigo County barn.

Enjoyment quickly turned to distress on the afternoon of April 2. A cough, congestion and shortness of breath — gradually emerging that week — suddenly “clobbered” Dan.

“I was pretty much out of it,” he recalled Tuesday.

His wife, Tammy, saw her “very active,” outdoorsy husband in an unusual position — dazed and sitting in their yard. She moved Dan into their car and drove him to the emergency room at Sullivan County Community Hospital, where he was admitted. That night, Dan’s lung functions deteriorated. By morning, he was transferred to Terre Haute Regional Hospital’s intensive care unit, intubated and placed on a ventilator.

When Dan entered the ICU, he was one of 213,144 confirmed cases of COVID-19 in the United States, including 3,039 in Indiana. Those numbers had increased five-fold nationwide and seven-fold statewide by the time Dan left the hospital on May 8. Today, more than 1.4 million Americans and 26,000 Hoosiers have tested positive for the novel virus. With no cure or vaccine, the highly infectious disease has claimed more than 86,000 lives nationally and 1,500 in Indiana.

Dan had been in generally good health, four years after retiring as a computer programmer at Rose-Hulman Institute of Technology. At age 67, he still jogged regularly, farmed 19 acres, restored tractors with his twin brother Dave, and volunteered at the Sullivan County hospital. He’d had a stent placed in his heart a few years ago and endured pesky gall bladder problems, “but nothing near what I’d considered dangerous, except for my age,” he said, referring to coronavirus vulnerabilities.

But once the virus hit Dan and left him on a ventilator, his wife — a veteran nurse — was immediately concerned.

“I knew it was a matter of life or death,” Tammy said.

At the outset of Dan’s saga, he was placed in a medically induced coma, so his memories of the stint are hazy. Still, one moment stands out. After 12 days on the ventilator, Dan was slowly awakened in an effort to remove the artificial respiration device. That’s when he first realized he was in an ICU.

A doctor stood near, smiling as Dan flickered into consciousness. The look on that physician’s face “gave me hope,” Dan said.

Unfortunately, the coronavirus affects more than organs and extremities. Its contagiousness also forces the afflicted to be isolated as they recover to prevent its spread. Dan couldn’t be visited by friends and loved ones, including his wife of nearly 40 years. Regional staff helped Tammy communicate with Dan through video conferencing online after he transitioned from the ICU to an isolated room. Their sons, Andy and Joey, participated in those video links, too. Those were helpful, Tammy said.

Yet, the physical separation for more than a month left Tammy feeling helpless, and it tested her husband’s spirits.

“The only people I saw in isolation were nurses and doctors,” Dan said. “That was very, very, very tough. The mental aspect — you feel kind of closed in, and every day was the same.

“I did have a view of the parking lot, though,” he quipped.

Actually, the view proved to be a blessing. Every week, a throng of family and friends from a variety of churches gathered near the adjacent Southside Church of Christ parking lot to pray for Dan, weary and resting in a fifth-floor hospital room overlooking the area.

“I knew they were doing that and it really lifted me up,” Dan said.

Outside the hospital, COVID-19 packed even more punches for the Pigg family. Tammy contracted the coronavirus, as did Pigg’s brother, Dave. Tammy, a cancer survivor, figured she would be more susceptible to serious complications. More than a month after testing positive, she’s still coping with shortness of breath, but her case never required hospitalization, only medication.

Likewise, Dave dodged a more dire case. He endured a week of night sweats, forcing him to change T-shirts three times a night. Exhaustion caused him to sleep 15 hours a day. He slowly recovered.

Today, Dave is back to his usual activities, including a jogging routine. He was deeply shaken by his twin’s rocky episode with COVID-19. For Dave, it began when his wife, Carolyn, informed him that Dan had been taken to the emergency room. Christian faith sustained Dave.

“I was just devastated,” Dave said. “Of course, I’m a believer, and we rallied together and prayed.”

At one of the parking-lot prayer sessions, a friend told Dave he’d seen a dove circle the hospital and land on the rooftop, just above Dan’s room. The friend figured it was a sign of hope.

Indeed, doctors took Dan off the ventilator after 12 days. He remained in the ICU for a few more days, then headed for a three-week-plus stay in an isolated room. Eventually, the daily checks of Dan’s lungs showed they were clearing. His breathing grew stronger. Finally, with his lungs clear, Dan got released to go home on Friday, May 8.

Family and friends — in masks and socially distanced — cheered as hospital staff escorted Dan’s wheelchair ride down the sidewalk toward his emotional and relieved wife.

The hospital staffers were applauding, too. “They were very proud of me,” Dan said of the doctors, nurses, aides and technicians. “I can’t say enough about those guys. They called it a miracle.”

Dan asked his doctor how close he’d come to losing the coronavirus battle. “He said, ‘As close as you can come,’” Dan recalled. “And, that’s sobering.”

Forty-five days after his trip to the ER, Dan is steadily regaining strength. He gets rehabilitation help from home-health-care nurses, including Tammy. After dealing with body weakness, memory loss and unsteadiness afoot, those issues have subsided. He’s regained his appetite, is sleeping better, and has resumed outdoors walks with their dogs.

Those prayers and support mattered through the 37-day ordeal and its aftermath. “I couldn’t have made it without my friends and my family,” he said. “And, God played a major role in my recovery.”

The family still has no idea where Dan contracted COVID-19. They’d remained fairly isolated in March, making less than a handful of outside trips for farm supplies. “Who knows?” Tammy said. “It takes just one little particle and being in the wrong place.”

These days, the Piggs are wearing face masks and “just using common-sense caution,” she said.

Dan’s ready to put coronavirus fully in the rear-view mirror. That will happen when he receives two consecutive negative tests for the virus.

After all this, what would he tell others about COVID-19?

“I would say, it’s a lot worse than I thought it was,” Dan said. “With that in mind, you just have to be as careful as you can.”