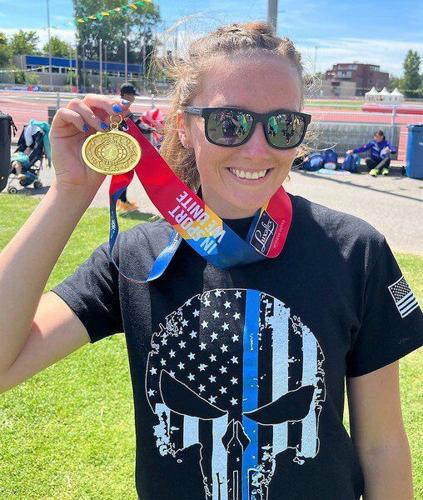 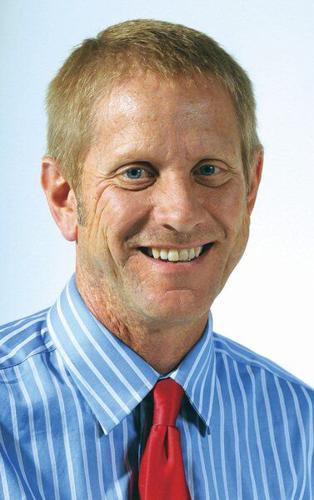 Consider the latter discipline from the track-and-field world. Pole vaulters must sprint 20 to 30 yards while carrying a pole more than twice their height, plant the pole into a small box, use its flexibility to catapult their body upward and over a horizontal bar, clear the bar without knocking it off, and land safely on a cushioned pit.

It’s a bit more daunting than corn hole or mowing the lawn.

Hanna Atwood spent a decade pole vaulting in middle school and high school in her hometown of St. Joseph, Illinois, and as a member of the Indiana State University women’s track and field team. In her studies at ISU, Atwood earned a bachelor’s degree in criminology. Her pole vaulting career then concluded as she became an officer in the Terre Haute Police Department in 2020, following her police academy training.

“I went directly from ISU to the THPD, and I hadn’t picked up a pole since,” Atwood said Thursday.

That is, until she decided to compete in the 2022 World Police and Fire Games in Rotterdam. Those Olympic-type games in The Netherlands involve nearly 10,000 athletes from 70 nations, including both active and retired police officers, firefighters, corrections and federal agents. They compete in more than 60 events, including the pole vault.

Atwood brushed off her skills last spring, practicing under the guidance of Jeff Martin, the ISU track program’s associate head coach and pole vault coach. She traveled to the Rotterdam games with fellow athletes in the Terre Haute contingent and won the gold medal in the women’s pole vault on Thursday. Atwood cleared 3 meters, beating rivals from Austria, Australia, India and Spain.

This police officer can clearly still pole vault, even after two years away from the sport.

“Actually, it was like riding a bike,” Atwood said by phone from Rotterdam, where the 10-day games continue through Sunday. “It was mechanics that my body hadn’t forgotten.”

The 23-year-old's accomplishment shouldn’t be underestimated, though. Atwood’s collegiate career ended early in 2020 after the Sycamores’ indoor season ended. Their outdoor season — a springtime tradition — was canceled as the COVID-19 pandemic swept through the country, cutting short sports competitions from the youth levels to professional leagues. So, her absence from vaulting was a full two years.

On top of that, Atwood had to alter the routine she’d performed daily in college. Because of the short preparation time for the Rotterdam games, the runway distance she would use was shortened from 90 feet to 60 feet. That’s no small change for a pole vaulter.

“A longer run-up ultimately allows an athlete to jump on stiffer poles because they are creating more speed with the longer run,” Martin explained. “So, for [her doing] no jumping in two years, training for three months, and running from a short run-up is really incredible and remarkable. Anytime you can win an international competition, it’s something special, and I feel honored that Hanna let me be a part of her journey.”

Such ability hinges on core body fitness, Atwood said, “to leave the ground and get inverted and then be spatially aware to maneuver yourself over the bar.”

Most of us humans can’t imagine leaving the ground, getting inverted and clearing a bar, let alone possessing spatial awareness.

Police work tasks her body, she said. As a person in small stature, the gear Atwood wears — including a police belt and vest — amounts to a significant portion of her overall weight.

“Twenty to 30 pounds on my body every week kind of throws my body out of whack,” she said.

Outdoors exercise, like hiking, fishing and kayaking, relieves that physical stress for her.

Atwood’s winning pole vault height fell short of her career-best by about a foot and a half. She enjoyed the experience, though, and it may have rekindled her interest. “This did make me miss it a little bit,” she said, hinting at a return to the next World Police and Fire Games. “I think I enjoyed this enough, I think I will do it again.”

The setting impressed her, too. Cooler temperatures fill the air of The Netherlands’ second-largest city, a port along the Nieuwe Maas, a Rhine River tributary that leads to the North Sea. “It’s beautiful, and I love it,” Atwood said. “It’s not 95 degrees over here. It’s cooler, which I like. And the people here have been wonderful.”

She got praise from her boss. “I am very proud of her performance both at the department and at the World Police and Fire Games,” THPD Chief Shawn Keen said Thursday.

Three other THPD officers have earned medals at the games, Keen said. Those include Sgt. Anthony Mazzon, a silver medal in team cross fit; Lt. Jason Czupryn, a bronze in individual cross fit; and Officer Calvin Doan, a bronze in Jiu Jitsu. Also, Sgt. Dale Bunk is competing in swimming, but Keen hadn’t yet received results yet.

“Considering that this is a worldwide competition, I am very proud of all of these officers,” Keen said. “They all worked to fund raise the money to travel and compete and have represented our department with distinction.”