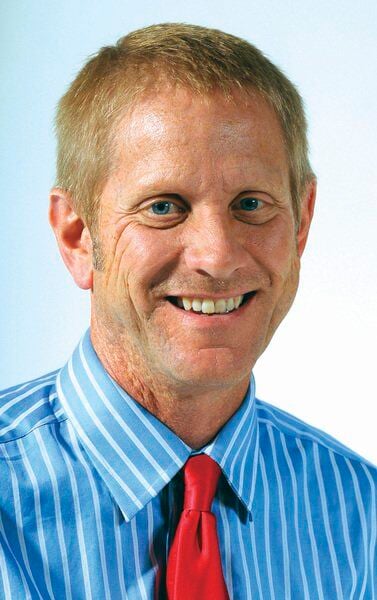 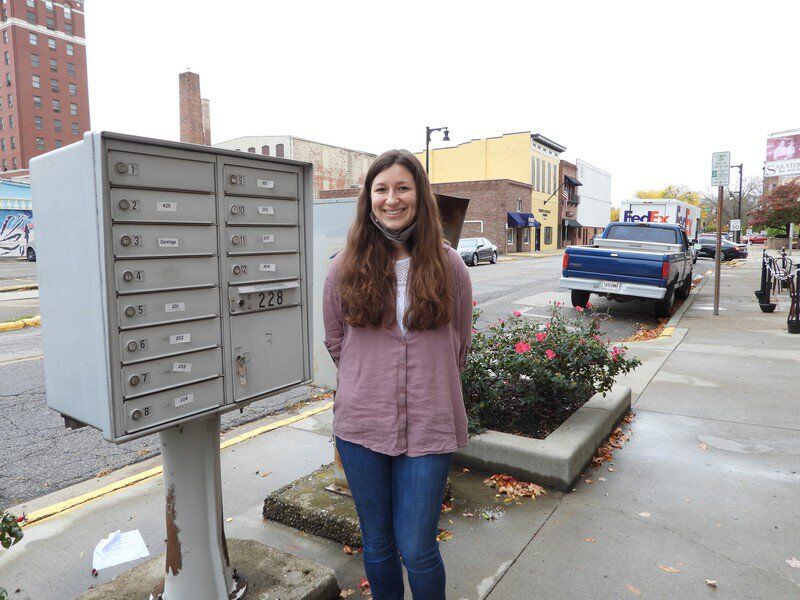 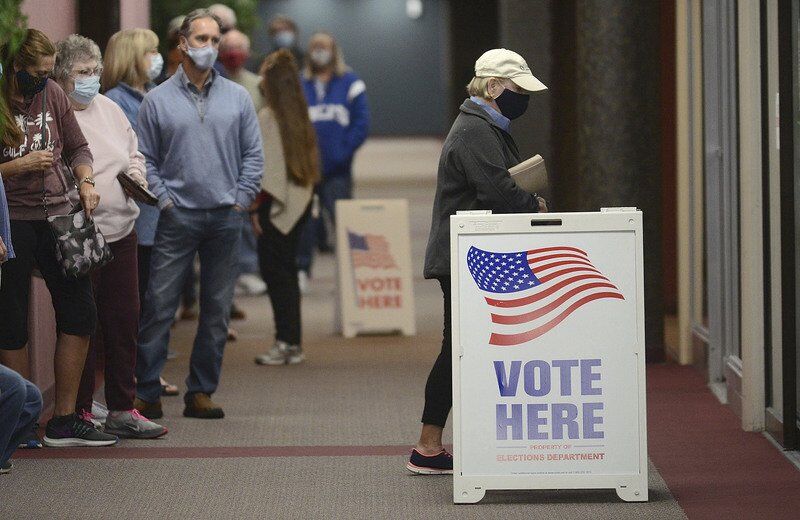 Tribune-Star file/Joseph C. GarzaEarly voters turn out: Voter Myra Eble was next in line to enter the voting center in the basement of The Meadows shopping center on Tuesday, Oct. 6. 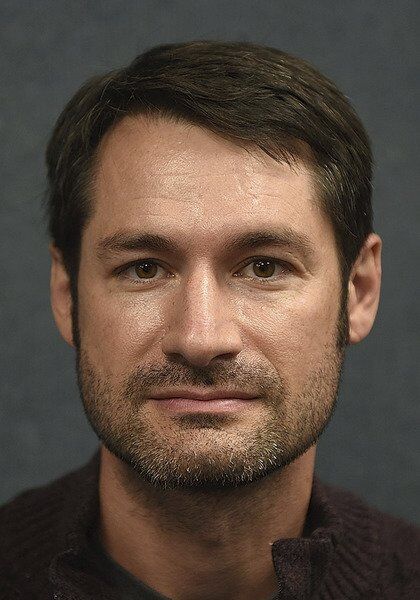 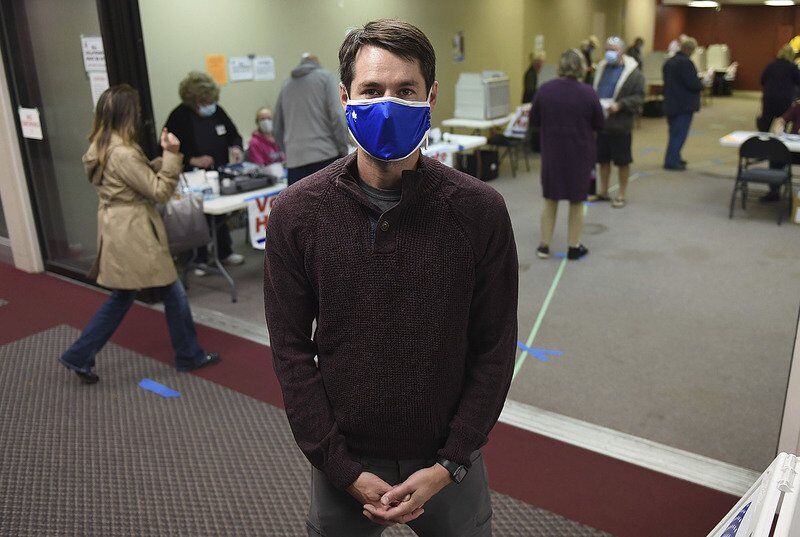 Tribune-Star/Joseph C. Garza They have been the predictors of presidents: Matthew Bergbower, associate professor of political science at Indiana State University, knows how Vigo County has been a predictor of the presidential election outcome. Here, he stands outside of the Voting Center in the lower level of The Meadows shopping center on Thursday as Vigo County residents vote in the background. 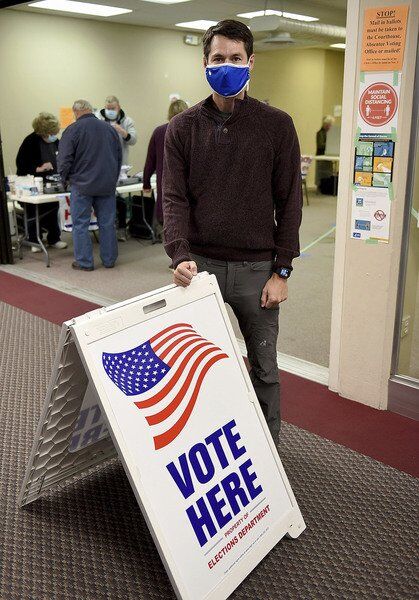 Tribune-Star/Joseph C. GarzaVigo’s vote says a lot: Matthew Bergbower, associate professor of political science at Indiana State University, thinks that President Trump will win Vigo County but not the election. Here, Bergbower stands near a “Vote Here” sign on Thursday outside of the Voting Center in the lower level of The Meadows shopping center.

Tribune-Star file/Joseph C. GarzaEarly voters turn out: Voter Myra Eble was next in line to enter the voting center in the basement of The Meadows shopping center on Tuesday, Oct. 6.

Tribune-Star/Joseph C. Garza They have been the predictors of presidents: Matthew Bergbower, associate professor of political science at Indiana State University, knows how Vigo County has been a predictor of the presidential election outcome. Here, he stands outside of the Voting Center in the lower level of The Meadows shopping center on Thursday as Vigo County residents vote in the background.

Vigo Countians’ loose-limbed voting style has been going on since 1888. Local voters have leaned toward the winning presidential candidate in 31 of the last 33 elections, according to Dave Leip, overseer of the “Atlas of U.S. Presidential Elections” website — a treasure trove of historical statistics for political junkies. The 1908 and 1952 outcomes are the exceptions. No other U.S. county comes close.

The Donald Trump era and 2020 — the year like no other — could end Vigo’s bellwether run.

Voting trends indicate Vigo has grown more partisan since Trump’s election. Forty-one percent of voters cast straight-ticket ballots in both the 2016 presidential and 2018 midterm elections — the county’s highest percentage since at least the 1990s and maybe ever. In both cases, Republicans outnumbered Democrats among straight-ticket voters, another first.

This time, numerous national polls show Democrat former Vice President Joe Biden leading President Trump with Election Day just 17 days away. And though fervor for Trump may have slipped locally, he carried Vigo County by 15 percentage points in his stunning 2016 victory. It would take a broad erosion of Trump’s base for him to lose here.

Thus, instead of Vigo mirroring the nation again, Trump could win the county and Biden could win the Oval Office seat on Nov. 3. (Or sometime afterward, once a record number of mail-in votes are counted.)

“[Fifteen] percent is a very large gap to close [for Biden, locally],” said Matthew Bergbower, associate professor of political science at Indiana State University. “I still suspect Trump will win Vigo County.” Bergbower also suspects Biden will be elected president by outpolling Trump in both the popular vote and the decisive Electoral College.

“However, I suspected this for Hillary Clinton as well in 2016,” Bergbower added. Of course, Trump won that year through the Electoral College, despite Clinton winning the popular vote by nearly 3 million.

Historically, Trump’s 15-point margin in Vigo County hints at a repeat outcome in 2020. Only once in the past 132 years has a presidential candidate who won Vigo by double-digit percentage points gotten beat in the following election. Republican Herbert Hoover carried this county by 10.6% in his 1928 victory, then lost Vigo and the presidency in a national landslide to Democrat Franklin Roosevelt in 1932.

The onset of the Great Depression didn’t help Hoover’s chances.

Epic troubles in 2020 are a factor in Trump’s reelection bid. Topping that list is the COVID-19 pandemic, which has claimed 217,000 American lives and triggered the deepest recession since, well, the Great Depression. His mercurial policy decisions, often delivered in the middle of the night on Twitter, as well as heavy turnover in his administration and the president’s impeachment by the U.S. House of Representatives earlier this year may be energizing his opposition.

On the flipside, Trump’s legion of supporters favorably cite several economic records set prior to the pandemic, his emphasis on “law and order” amid social unrest, a tax cut, repeals of environmental and workplace regulations, and the appointments of conservatives to federal judgeships and the U.S. Supreme Court.

Trump sees his popularity as widespread and has insisted “the only way we’re going to lose, is if there’s mischief.” That’s a reference to unproven claims of widespread fraud through mail-in ballots, a process that has been expanded in two-thirds of the states to prevent the spread of coronavirus at polling sites.

Brooks LaPlante, who formerly represented Vigo County as a Republican in the Indiana General Assembly, follows political history and trends. He expects Trump to be reelected and carry Vigo County, preserving the bellwether. LaPlante believes the mainstream media has treated Trump unfairly, and that the president is expanding the Republican Party by “bringing in new converts on a daily basis,” including blue-collar Democrats.

Also, Trump’s response to riots and violence in the wake of protests in some cities — those governed by Democratic mayors and governors — is winning over voters, too, LaPlante said. He also noted a Gallup poll this month in which 56% of respondents said they’re financially better off now than four years ago.

“People want safety and prosperity,” said LaPlante, who now lives in Brownsburg. “Trump represents the former, and he did well enough in the latter to get that 56% in Gallup’s poll. Trump will carry Vigo County and should be reelected. I do believe there will be some voting irregularities, hopefully not enough to throw the entire election into total chaos.”

Terre Haute resident Ron Danielson has typically backed Republican presidential candidates, though he voted for Obama in 2008. This fall, the 68-year-old retiree from banking and the Air Force voted early for Trump. He expects the county and the country to do the same.

“I think there is a tremendous amount of support for Trump in Vigo County,” Danielson said. “I think the big issue on the ballot this year is law and order.” Unrest in Democratic cities “has caused me to question what will happen if the Democrats take control of the White House and Congress.”

“It’s a matter of who has more motivation to vote for their candidate,” Steiger said. “The get-out-the-vote operation during Obama’s first run, especially, was impressive, as is the intensity of the Trump supporters.”

He also sees the electorate growing more diverse nationally, but not so much locally. Minorities comprise just 12.4% of the county population, compared to 23.7% nationwide. “That is why I think [Trump] will carry Vigo, because Vigo’s demographics are very favorable to him,” Steiger said, “and too many of Vigo’s young people leave Vigo County.”

Similarly, Terre Haute attorney Mike Ellis expects the president to lose the national election, with women and minorities turning out in larger numbers. In 2016, “many [minority voters] stayed home,” Ellis said. This time, most will vote and do so for Biden, he added. Still, because of the smaller minority population here, Ellis expects Trump to again carry Vigo.

Sarah Swiezy is a 26-year-old med student at Indiana University School of Medicine’s Terre Haute campus. She sees a need for better leadership and is concerned that America’s reputation around the world is slipping. She’s voting for Biden.

“There’s been a mishandling of our government,” Swiezy said. “It doesn’t seem like anybody’s in charge right now. I’m voting to get some new folks in office.”

“When I elect a president, I want them to conduct themselves in a professional manner,” Ward said, “and to stand for what’s right, not just in the short term, but in the long term, too.”

Judy Hogan, 72 and a lifelong Hautean, traditionally leans Democratic, but she’s voted for Ronald Reagan and George H.W. Bush for president in the past, and is voting for incumbent Republican Eric Holcomb for Indiana governor. “He’s done a good job,” Hogan said. The 2020 presidential race is a different matter.

“I’m going to vote for Biden,” she said. “I’m just kind of tired of Trump and his nonsense. You can’t believe anything he says.”

The president’s base of loyalists in the county and beyond is broad, but not eternal.

Trump’s 2016 win reflected discontent across the political spectrum, said Fred Nation, former press secretary for Democratic Senators Birch Bayh and Evan Bayh. “While that discontent still exists, President Trump’s behavior has made this election a referendum on him,” Nation said, adding that the president could lose women and seniors.

Terre Haute has a large senior population and “many who voted for candidate Trump four years ago have lost enthusiasm for him due to his handling of the COVID-19 pandemic.”

“Morality, civility and compassion are sorely missing,” Reynolds said, “and I desperately want to see these American traits return throughout Terre Haute and the country. I believe the people of Terre Haute are decent and good people. Terre Haute and its people have been a bellwether of basic decency.”

Vigo County residents have multiple options for voting in the upcoming 2020 general election.