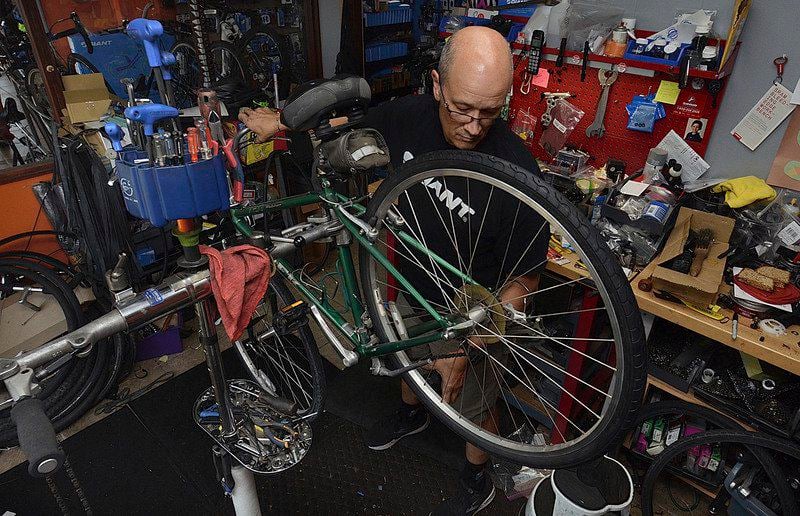 Bikes are back: Crossroads Cyclery owner Jim Mauriello checks the rear brakes on a customer’s bike after he replaced the back tire on Thursday at his shop on Ohio Street. New bikes in Mauriello’s shop are being bought as soon as they arrive.Tribune-Star/Joseph C. Garza 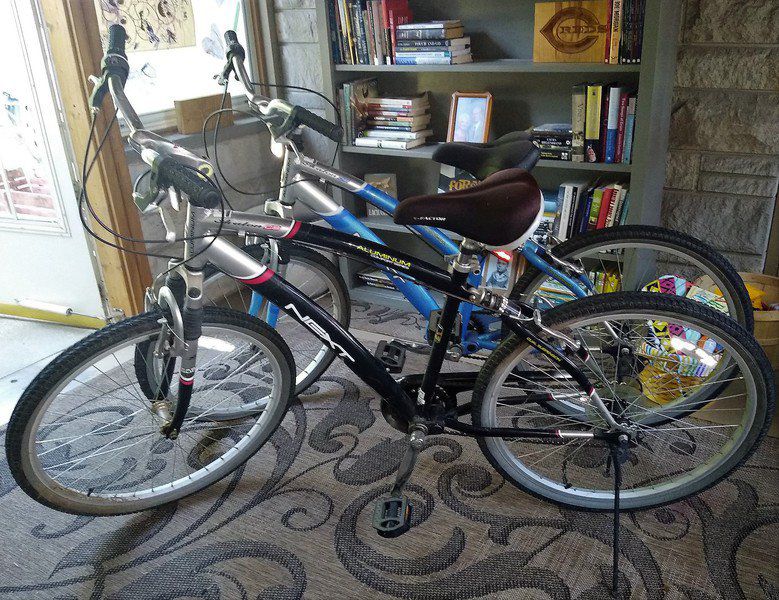 Tribune-Star/Mark BennettOn the road again: Like many Hauteans, Hoosiers and Americans, columnist Mark Bennett and his wife, Teri, pulled out their bicycles to ride again this spring and summer. Bicycling has surged in popularity as a safe activity during the coronavirus pandemic.

As a kid, I spent as much time riding my bike as I now do peering into a screen.

It transported me to baseball practices, sandlot games, the general store, school (when I missed the bus) and assorted neighborhood antics.

I wasn’t alone. A dozen bikes, from 1960s English racers to banana-seaters, would be propped up on their kick stands in the grass beside our old school’s playground during pickup basketball games. The cool, handyman-type guys created oddball bikes, rebuilt with the frames turned upside-down.

I lacked such technical ingenuity, but I could at least fix my bike if its chain skipped off. I knew how to oil it, patch its tires and raise the seat when my legs grew longer.

I routinely rode that silver Sears & Roebuck bike with a bottle of Bubble Up in one hand and my ball glove looped on the handle bars.

The bicycle was riding high in those days. In fact, Time magazine declared the decade from 1965 to ‘75 as the “biggest wave of popularity” for bicycles ever. The trade publication Bicycle Retailer and Industry News cited that Time assertion in a story published in March under the headline: “This could be the start of Bike Boom 2020.”

Americans who haven’t ridden a bike since they got a driver’s license are getting reacquainted with those human-powered vehicles. When Indiana, Illinois and most other states shut down nonessential businesses, including indoor outlets for fitness activities in March, many folks dug old bikes out of sheds and garages, or bought new models. My wife and I wheeled our bikes out of storage, dusted them off, pumped fresh air into the tires and took a few spins.

Now, by mid-June, bicycles and parts are hot commodities across the U.S.

Jim and Maria Mauriello started the 2020 season with 60 new bicycles for sale in their Crossroads Cyclery shop on Ohio Street in Terre Haute. “We’ve gone through all of those,” Jim Mauriello said Thursday.

His shop’s inventory featured 16 kids bikes in mid-March, when Indiana Gov. Eric Holcomb imposed a shutdown to curtail spread of the highly contagious and potentially lethal COVID-19 coronavirus. A week and a half later, all 16 of those bikes had been sold.

Now, when a shipment of five new bikes arrives at Crossroads Cyclery, two or three have been pre-sold to anxiously awaiting customers.

Mauriello also is busy repairing bikes. Lately, he’s fixing two-wheelers before the shop opens and hours after it closes. He spends two to three hours a day tracking down bike parts from a network of vendors that Mauriello has expanded to help supplies meet the increased demand. His repair jobs include up-to-date models, incorrectly assembled factory bikes, and retro styles from 30 or more years ago.

People turned to bikes when they couldn’t access a gym, or because they didn’t, or couldn’t, physically withstand running or walking, Mauriello explained. “Or, they just wanted to get outside with their family,” he added. “I think it’s just that people want to get out, and this may be their only outlet.”

That cycling group actually has seen its number of participants drop during the pandemic, Kelley said, because many of its older members “are just waiting until later” to resume activity with the club. Most are still cycling individually, though. “They’re doing it on their own,” Kelley said.

Social distancing and exercise can coexist on a bike ride, especially if done alone or with fellow members of a household.

When my wife and I pedaled down the country road near home, neither of us had to watch a how-to video or practice. It was as simple as, well, riding a bike. Sweat rolled down our cheeks, but the breeze cooled us on the downhill stretches, with wind blowing in our faces, tires purring over the asphalt, and wheel hubs clicking as we coasted.

If I could only find a bottle of Bubble Up somewhere.