A new $20 million plus Marriott Courtyard and parking structure is proposed for future construction on the former Vigo County School Corp. site at Seventh Street and Wabash Avenue in downtown Terre Haute.

The plan would replace a surface parking area previously proposed, according to a concept presented Wednesday to the Vigo County Capital Improvement Board.

“Specifically, a parking garage would sit at the ground level with the hotel sitting atop the parking garage in a podium construction design,” said Steve Witt, a member of the CIB and executive director of the Terre Haute Department of Redevelopment.

Witt said the top floor of the parking garage would be used as a rooftop pool, fire pit and outdoor area, “perhaps even a bar or restaurant” overlooking Wabash Avenue, Witt said. 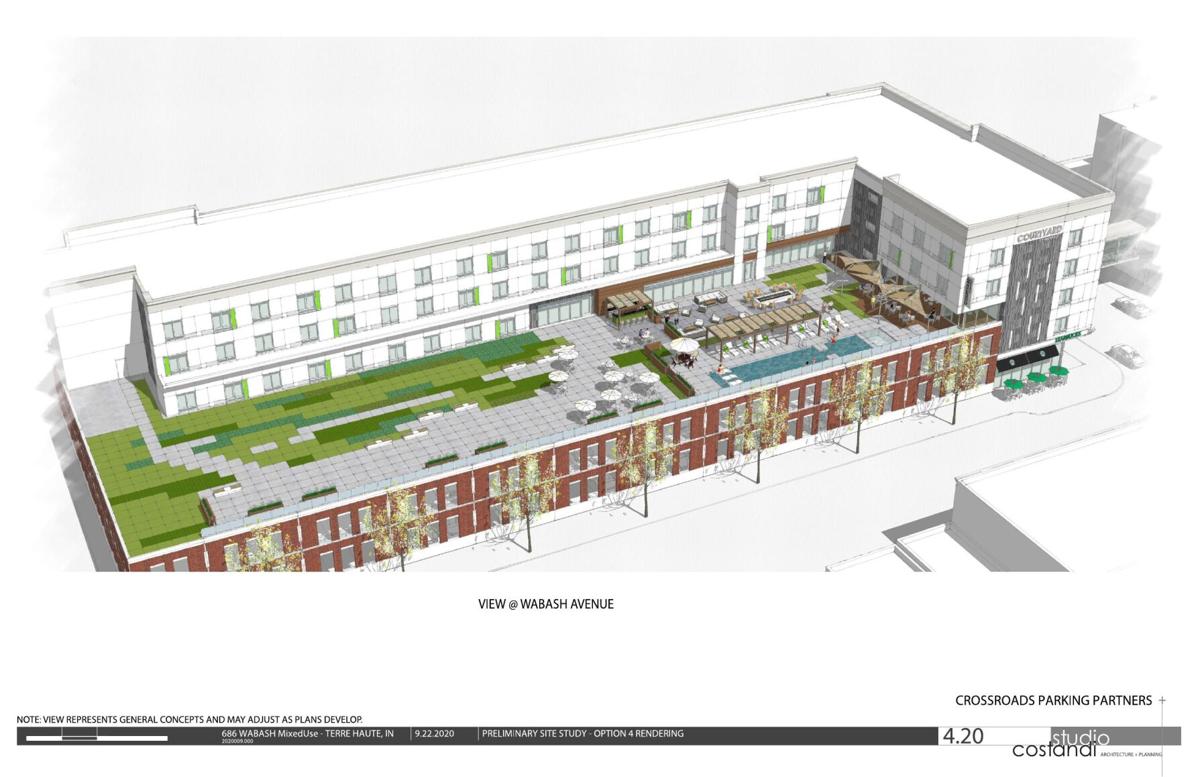 Two options are being considered for the parking garage portion of the proposed structure.

The first is a two-deck parking garage which would provide about 138 new parking spaces for the Marriott Courtyard and the Hilton Garden Inn. This concept would also provide about 1,600 square feet of retail space at the northwest corner of 7th Street and Wabash Avenue.

The second option is a three-deck parking garage that would provide about 200 new parking spaces for the hotels and have 120 plus guestrooms on three levels. This plan would also add about 15,400 square feet of retail space, with another 2,450 square feet for retail expansion.

“That [retail space] would be along the entire length of the structure along Wabash Avenue,” Witt said. “That retail space would add additional cost to the garage.”

Witt said the current estimated cost of the project is $20 million, not including the parking garage.

“In the current coronavirus environment, obtaining financing for a new hotel is extremely challenging if not impossible,” Witt said, “So, there is no set date for the project to commence construction.”

To make the concept move forward, the CIB in a 5-0 vote approved a resolution to transfer the former school corporation property to the Terre Haute Redevelopment Commission. Vigo Commissioners Brad Anderson and Judy Anderson were absent.

The Redevelopment Commission met in the afternoon and unanimously voted to consider taking ownership of the property.

The commission passed a resolution that authorizes Witt, as Terre Haute Department of Redevelopment director, to later accept the property if he approves of the terms of the lease; the property has received a satisfactory environmental inspection; the property has proper title insurance, and it is insured.

While the vote Wednesday does not obligate Terre Haute Redevelopment to take over ownership, commission members did each relay their support for the proposal.

“It is anticipated that Terminal Hotel Partners LLC, which is Mr. Tim Dora [of Hilton Garden Inn] would offer a bid of $1 for the property, but in addition, there is a development standard that they would develop a $20 million-plus project as described,” Witt said at the CIB meeting.

“While the CIB did pay $3 million for the school property, as you recall, the original cost for the stand-along garage to be built at Seventh and Cherry streets to replace the Hilton Garden Inn parking that we lost to the convention center was about $8.5 million,” Witt said. “So, in the long run, we are getting much more development for our initial investment.”

The Vigo County School Corporation will remain in the existing administration building on the site until September 2021, unless if choses to move out sooner, Witt told the board.

The current building eventually would be demolished to make way for the hotel and parking project.

“This project is in the very preliminary stage, so it is subject to modification, once detailed cost estimates are obtained and so forth,” Witt told the CIB. “It would take up the entire school property.

“I think it is a very exciting project,” Witt added.

CIB President Jon Marvel said this proposal will keep the State Office Building intact at the corner of Seventh and Cherry streets “and keep people who go to the state office building downtown, where there will be restaurants and other retail activity … so that is another plus.”

“The virus has impacted everything worldwide. This is just an idea and the hotel group has given us these rendering of what they would like to see happen there and we just hope the public will get behind the project,” Marvel said.

Boo Lloyd, a CIB member, said, ‘This is just what Wabash [Avenue] needs. This looks great.”

— Alex Modesitt of the Tribune-Star also contributed to this report.

Editor's note: This story was updated at 5 p.m. to add information from the meeting of the Terre Haute Redevelopment Commission at 4 p.m.

Piling work is slated to be completed today (Wednesday, Nov. 18), allowing for the start of more foundation work on a new downtown parking garage for the Terre Haute Convention Center.