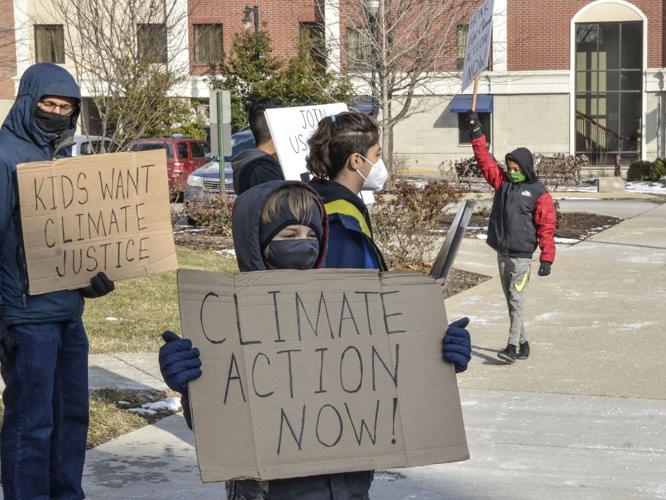 Voicing their opinion: A group of Vigo County students held up signs during Friday afternoon's protest against climate change outside of the Vigo County School Corporation downtown headquarters. 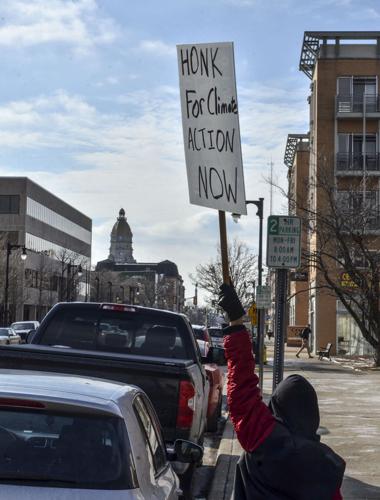 Honk: A sign asking for car honks of support for their climate friendly message is held up during Friday afternoon's protest against climate change outside of the Vigo County School Corporation downtown headquarters. 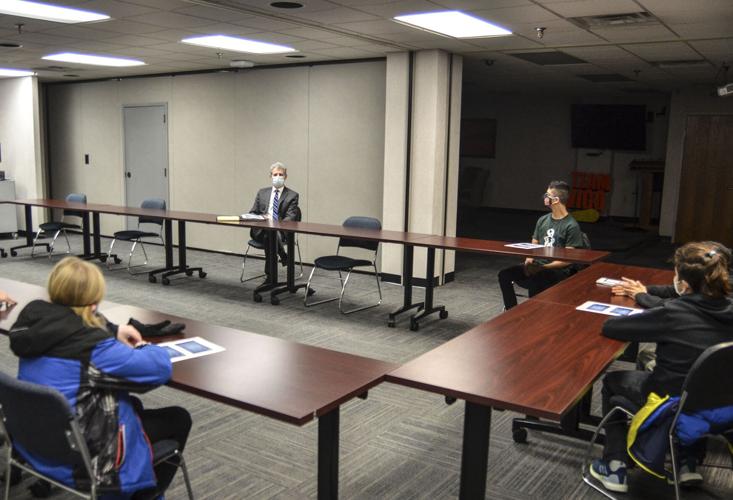 Voicing their opinion: A group of Vigo County students held up signs during Friday afternoon's protest against climate change outside of the Vigo County School Corporation downtown headquarters.

Honk: A sign asking for car honks of support for their climate friendly message is held up during Friday afternoon's protest against climate change outside of the Vigo County School Corporation downtown headquarters.

A Vigo County youth-led group called “EARTHlings” hopes to bring awareness about the urgency of climate change and also to persuade the school district to take the lead in providing climate change education.

EARTHlings, which began about six months ago, stands for Environmental Activists for a Resilient Terre Haute.

Since January, the group has gathered outside the Vigo County School Corp. administration building on Fridays as part of #FridaysforFuture, with students carrying signs and working to bring awareness.

FridaysforFuture is an international movement that began in August 2018 after 15-year-old Greta Thunberg and other young activists in Sweden sat in front of the Swedish parliament every school day for three weeks to protest against the lack of action on the climate crisis.

EARTHlings member Leif Speer believes climate change is one of the biggest problems the world faces.

“Our futures are being ruined at this very moment and some people will sit by and let that happen,” said Speer, a Dixie Bee Elementary fourth-grader. “I kind of feel like I have to make up for all of the people who aren’t taking action.”

Another member, Ayush Bhattacharyya, a sixth-grader at Honey Creek Middle School, said climate change “is a big, big problem.” He’s become an environmental activist because “I want to make the future better for me and for when I have children.”

On Jan. 8, five VCSC students, also EARTHling members, addressed the School Board during a work session. The group is asking the Board to pass a resolution recognizing climate change “is a crisis that needs to be confronted now,” and it also wants the board to “resolve to include climate change education in all Vigo County schools.”

It wants the district to incorporate climate change education across the curriculum in grades K-12.

”Human-caused climate change is an existential threat to our future,” Bhattacharyya told the School Board. “As young people, we will have to live through the every worsening consequences of our parents’ and grandparents’ refusal to treat the climate emergency like an emergency.”

Students must be taught about the issue and “how it will touch almost every area of our lives,” he said.

Indiana received a letter grade of “D” from the National Center for Science Education, which rated states on educational standards for climate change education.

In January, the Indiana Department of Education announced a new climate change education framework in partnership with Purdue University. The framework, which is optional, offers instructional resources for educators to include climate change information in their curriculum.

After the EARTHlings’ presentation to the School Board, Superintendent Rob Haworth invited the group to meet with him later in the week to discuss their ideas. Students who presented were Bhattacharyya and brother Ahan; Diarmuid Corcoran, Elias Hellmann and Leif Speer.

Board president Jackie Lower told the students, “I appreciate your enthusiasm ... This is the beginning of a conversation.” She also suggested they approach local legislators.

The group is sponsored and supported by Earth Charter Indiana. EARTHlings members include elementary, middle and high school students as well as parents, including Jim Speer, Indiana State University professor of earth and environmental systems, and Shikha Bhattacharyya, founder of reTHink, a group that encourages environmental friendly practices. ISU students also have participated.

Bill Riley, VCSC director of communications, praised the students’ effort. “What a great thing to see five of our students presenting their ideas at a board meeting ... They want to take control of their education and talk about things they are passionate about.”

After the district received the climate framework from IDOE, it sent the information out to teachers along with updated “pacing” guides on how and where to use those resources, he said. That information was sent last week.

Climate change is addressed in state standards in two areas — science and social studies, Riley said. He noted that science textbooks are up for adoption in two years.

“We continue to listen to [EARTHlings] and talk with them,” Riley said. “We agree it’s an important issue.”

In addition to curriculum, EARTHlings provided several other ideas for the district on ways to educate students about climate change, including:

• Incorporating climate/environmental issues in morning announcements. “We need to hear about it every day,” the group says.

• Create visual messages, such as on signs outside.

• Show videos at times that do not disturb class. 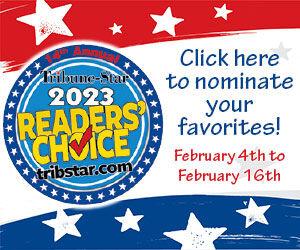