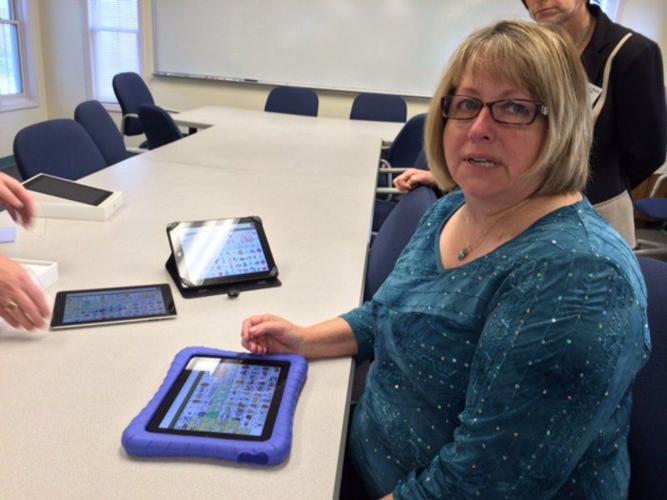 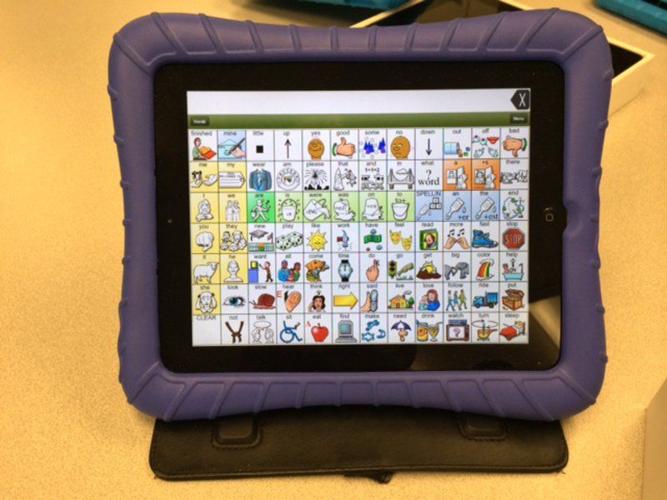 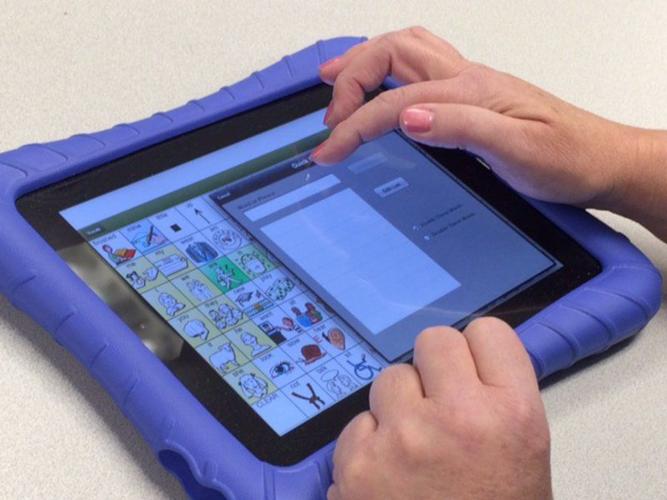 Tribune-Star/Sue LoughlinWords for Life: April Newton, VCSC speech/language pathologist, demonstrates use of an iPad with a special app called Words for Life, a tool that assists those who are nonverbal or who have communication challenges. Five iPads equipped with the app will be given to VCSC students who can benefit.

Tribune-Star/Sue LoughlinWords for Life: April Newton, VCSC speech/language pathologist, demonstrates use of an iPad with a special app called Words for Life, a tool that assists those who are nonverbal or who have communication challenges. Five iPads equipped with the app will be given to VCSC students who can benefit.

This week, Dixie Russell’s 5-year-old daughter, Sophia, will receive the loan of an iPad with a special communication app that will assist the child in communicating her wants and needs.

Sophia has Down Syndrome, and while she does have verbal communication skills, those not around her very often may have trouble understanding what she is trying to say. Sophia also signs and uses gestures.

The iPad will be equipped with an app called LAMP Words for Life, a tool that assists those who are nonverbal or who have communication challenges. The family is receiving the new tool as the result of a collaborative effort between several agencies, including ARC of Vigo County, United Cerebral Palsy of the Wabash Valley, Blumberg Center, Covered Bridge Special Education District and Vigo County schools.

Four other Vigo County School Corp. students and families also will benefit. ARC funded the app while UCP funded the iPads and cases; the goal is to acquire more for other students with similar communication challenges. Children will use the specially equipped iPads both at home and school.

Individuals using the LAMP approach learn to use words and build sentences to communicate their wants, needs and ideas by pressing buttons on a speech-generating device that is picture- and word-based.

“It’s neat to see her use it with someone who may have a hard time understanding her,” Russell said. “She hits a button and it says exactly what she wants —  if she wants to eat, drink or play. It definitely gives her another means of communication.”

On Tuesday, agencies involved with the collaborative effort gathered at UCP offices to check out the new tools, which will be distributed this week. Some of the agencies provide training, others provide resources. UCP is loaning the iPads to families; it also is applying for another grant to get more of the devices to benefit even more students.

“It benefits individuals who cannot speak traditionally,” Newton said. “It also supports their families because these kids have a lot of frustrations, so we end up with a lot of behavior issues.” Some of the children are nonverbal.

When students can communicate better by using the tool, negative behaviors are reduced, she said. The app also can be used by adults with speech difficulties, including stroke patients, those who have cerebral palsy or those with head injuries.

The iPads will be used solely for communication. Those selected to benefit “are kids who have successfully used it (the app) but are waiting for funding for their own personal devices,” Newton said. Once they have their own, the iPads with communication apps will be given back to UCP to loan to other students who need them.

The goal is for the children to eventually develop their own speech, but some may not. “Chances are they will have to use some kind of device to support their communication throughout their life,” Newton said.

The initiative developed out of training that occurred at Indiana State University’s Blumberg Center last fall.

Newton spoke highly of Words for Life. “It allows for words to be found in the exact same location every time, so for individuals with motor problems, that’s really important and will benefit them in such a variety of ways. It’s going to help them learn language, it’s going to help them develop social skills and be able to communicate with families. The list goes on and on.”

With the app, students can learn to create their own sentences, versus programming in which they hit one button that generates a sentence.

In a demonstration, Newton touched several buttons, and the app read aloud, “I like to read the newspaper.”

Missy Schaumleffel says her 9-year-old son, Coleman, already uses an iPad equipped with the app (he won’t be getting one of the UCP iPads). He is nonverbal and has autism.

It’s made a huge difference, she said. He is able to communicate better through the app and his behavior is improving. “He has really taken off. It’s really starting to open a whole different realm we didn’t see in him before.” He can use the buttons, and the speech generating device, to communicate his wants and needs.

“I see it helping him so so much in the future,” Schaumleffel said. “It will open many more doors for kids with autism.”

Susie Thompson, UCP executive director, is excited about the initiative.

With the grant application, the goal is to reach even more parents and children, Thompson said.

Other partners include the Vigo County Education Foundation and ISU Rowe Center for Communication Disorders.