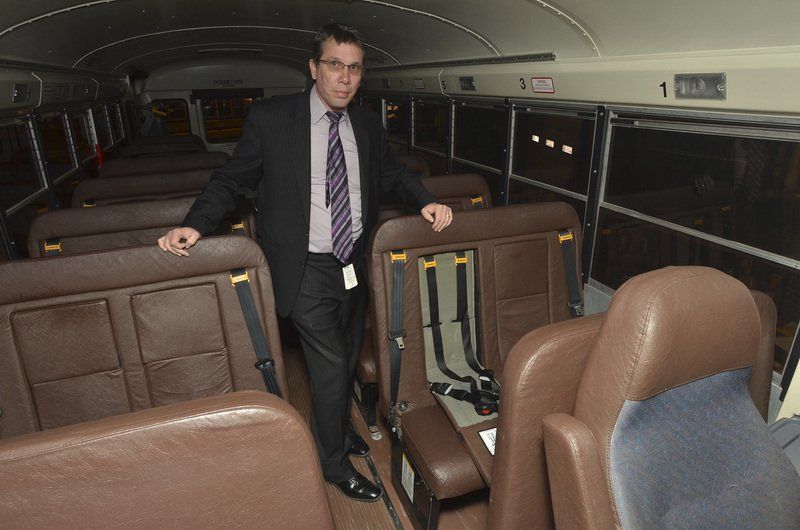 Tribune-Star/Jim AvelisHarnesses: Vigo County School Corp. facilities director Franklin Fennell stands in a bus for special needs students. The bus has two sizes of harness for the passengers, including small ones contained inside the regular seats. 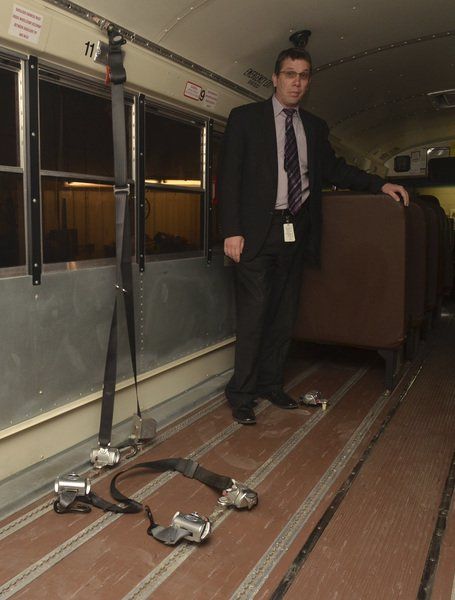 Tribune-Star/Jim AvelisHarnesses: Vigo County School Corp. facilities director Franklin Fennell stands in a bus for special needs students. The bus has two sizes of harness for the passengers, including small ones contained inside the regular seats.

The Vigo County School Corp. is continuing to research use of seat belts in school buses, and Franklin Fennell, director of transportation, hopes to present his findings to the School Board sometime this summer.

The issue has gained renewed attention in the aftermath of Saturday’s school bus rollover crash on Interstate 65 near Demotte in northwest Indiana, which occurred when a Terre Haute driver side-swiped the bus. Players and others from Griffith High School, including 21 students and six adults, were southbound on Interstate 65 to the Class 3A Lafayette Jefferson Semistate to play Marion.

An assistant coach was hospitalized with non-life-threatening injuries, while the other 26 players and staff members on the bus have been treated and released.

The Vigo district wants to have research in hand “so next year, when we go to purchase buses, we can have that information to decide how we want to proceed,” Fennell said Monday.

Superintendent Danny Tanoos announced in January that district officials would be studying the issue. Use of seat belts has both pros and cons, Tanoos said at the time, but “it looks like the government is going more toward that recommendation.” The district’s newer special-needs buses already have them, he said.

Indiana law does not require school buses to have seat belts, nor does it give the Department of Education the authority to require them. Unless action is taken by the Legislature, having seat belts on school buses will remain a local decision, according to Samantha Hart, IDOE spokeswoman.

While there are no federal mandates, last November, the director of the National Highway Traffic Safety Administration — speaking at a meeting of the National Association for Pupil Transportation — recommended operators consider use of a restraint system.

In a transcript of those remarks, NHTSA administrator Mark Rosekind told his audience: “School buses should have seat belts. Period. ... Seat belts will save the lives of children who we might otherwise lose in crashes. Seat belts provide the safety those kids deserve.”

Rosekind further stated last fall, “NHTSA’s policy is that every child on every school bus should have a three-point seat belt. NHTSA will seek to use all the tools at our disposal to help achieve that goal, and ... I want to launch a nationwide effort to get us there.”

On Monday, Fennell said he is still gathering information and talking to other school districts for a future presentation to the superintendent and board. There are pros and cons, he said.

“Some corporations would love to do it, outside of the cost,” he said. VCSC officials have been told that the cost of putting three-point lap/shoulder seat belts in a new, 78-passenger bus would be about $14,000. That’s in addition to the cost of a new bus, which ranges from about $110,000 to $125,000.

The district operates 190 school buses, and this time of the year, the buses transport about 7,800 students each morning; the number is about 500 or 600 less in the evening.

Vigo’s buses travel more than one million miles each year, including transportation to and from school and extracurricular activities.

There are no mandates as far as seat belts for general education students, Fennell said.

But all pre-school students who are transported use seat belts, and seat belts are used for some special-needs students depending on their individual circumstances, he said.

One major issue associated with mandatory seat belts is the additional cost, Fennell said. “School systems are going to need a means to gather that money,” he said. School transportation budgets are already hard hit, particularly with recent tax caps. If seat belts are mandated, “there has to be some relief so districts have the extra income to meet those requirements,” he said.

The extra cost could potentially reduce the number of new buses a district could purchase, which could mean buses are on the road longer; that, in turn, could mean more mechanical issues down the line, he said.

There are also many questions related to policy and procedure, he said.

If seat belts become mandatory, whose responsibility is it to ensure the child is buckled up? Is it the driver’s responsibility or the parent’s? Should parents be allowed on buses to buckle in their younger children?

If a driver is unloading students on a busy road, such as U.S. 40, will that driver have to leave his/her seat to help unbuckle a child?

What if a student doesn’t comply — how should that be addressed? Is it a matter of state law or a school disciplinary issue?

Another concern relates to evacuation, if it becomes necessary. Can young children unbuckle themselves to evacuate?

Clear policies and procedures would have to be established so that parents, school staff and students understand the requirements, Fennell said. “There is nothing that can’t be worked around, but clear policies are needed” up front so these issues don’t come up after the fact.

“I don’t think anyone is against seat belts. It’s just that a lot of preparation is needed, and everyone must be on the same page to get it done,” he said. Also, there must be a way to fund it.

“We try to improve things every year, and if that’s something we can do to enhance student safety, great,” Fennell said. But he also wants to ensure making an improvement in one area doesn’t compromise safety in another.

Even without seat belts, “school buses are still the safest form of transportation,” he says. The Griffith High School bus accident over the weekend, and the lack of life-threatening injuries despite the circumstances, demonstrates the safety of school buses, he said.