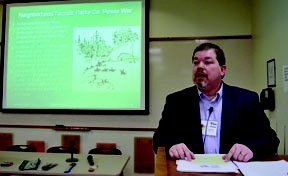 Tribune-Star/Joseph C. Garza Not so civil war: Tim Phipps reads about the Parke County posse war of 1863 during his presentation, "Family History in the Civil War Era," Monday at the Vigo County Public Library. 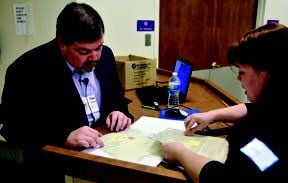 Tribune-Star/Joseph C. Garza What could they be?: Tim Phipps looks over documents from 1860 to 1940 for Jenny Ingram during a break from his presentation Monday at the Vigo County Public Library.

Tribune-Star/Joseph C. Garza Not so civil war: Tim Phipps reads about the Parke County posse war of 1863 during his presentation, "Family History in the Civil War Era," Monday at the Vigo County Public Library.

Tribune-Star/Joseph C. Garza What could they be?: Tim Phipps looks over documents from 1860 to 1940 for Jenny Ingram during a break from his presentation Monday at the Vigo County Public Library.

Parke County, home to covered bridges and festival corn dogs, was once the scene of political gunfights, moonlight raids and secret societies.

That’s what Tim Phipps, a genealogist and historian, uncovered in the black earth of the county as he dug into his family’s often colorful past.

“I urge you to look at county criminal records” Phipps told members of the Wabash Valley Genealogy at their regular meeting at the Vigo County Public Library Monday night.

In the course of looking into his family’s Parke County roots, which date back to the 1830s, Phipps discovered America’s Civil War had violent echoes in the canyons, forests and towns of the area in the 1860s.

One Parke County township, Sugar Creek, near what is now Turkey Run State Park, was a hotbed of resistance to the war and, especially, the draft. That’s where the Phipps family resided, and its home was known to be a welcome place for war deserters seeking refuge, he said.

“Here in Indiana, there was a lot of resistance to the draft,” Phipps said. Some opponents of the war proudly wore on their clothing the head of Liberty cut from a copper penny. Other anti-war Democrats proudly wore images of a butternut, which was associated with the southern cause.

Reading old newspaper accounts, Phipps discovered a gunfight took place on the square in Rockville during the war between two brothers and another man who was wearing a “butternut” symbol. About 20 shots were fired and one man was injured in the exchange.

“And that was downtown Rockville,” Phipps said.

Phipps also told of how one of his ancestors was accused of stealing a hog during the war. An armed posse went to look for him and found him armed with a double-barrel shotgun in a remote Sugar Creek cabin. After an exchange of fire that resulted in no known injuries, the posse left to pursue the matter at another time, Phipps explained.

Historical research such as Phipps’ helps genealogists understand the political and cultural settings in which their ancestors lived, said Loran Braught, founder of the Wabash Valley Genealogy Society.

“Our ancestors didn’t live in isolation,” Braught said. An understanding of the historical context can help genealogists make sense of some of the facts they uncover while digging into their family past, he said.

“It was a very tense time,” Phipps said of the Civil War era in Parke County. “Home guards,” organized by pro-union groups, were formed and deputized to search for deserters and keep “Butternuts” or “Copperheads” in line, he said. In some cases, Union soldiers home on leave would take it upon themselves to hunt for deserters or those they regarded as helping them, Phipps noted.

“There was a lot of violence,” Phipps said, adding that “secret societies,” both pro- and anti-war were formed in Parke County. “A lot of stuff happened at night,” he noted.

In the second half of his talk, Phipps listed many of the Civil War-related records available to people doing family history research. Phipps has been studying his own family’s roots and the Civil War in Parke County since the late 1990s.

“Genealogy is one of these things that you learn by doing,” said David Bonnett, Indiana Genealogist for Vigo County. The Wabash Valley Genealogy Society, which covers six Indiana counties and three in Illinois, offers courses in genealogy, he noted.

For more information about the Wabash Valley Genealogy Society, visit their website at www.inwvgs.org.