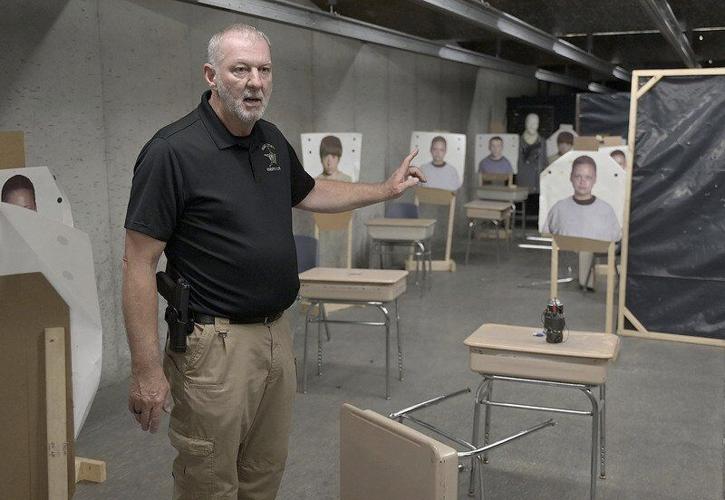 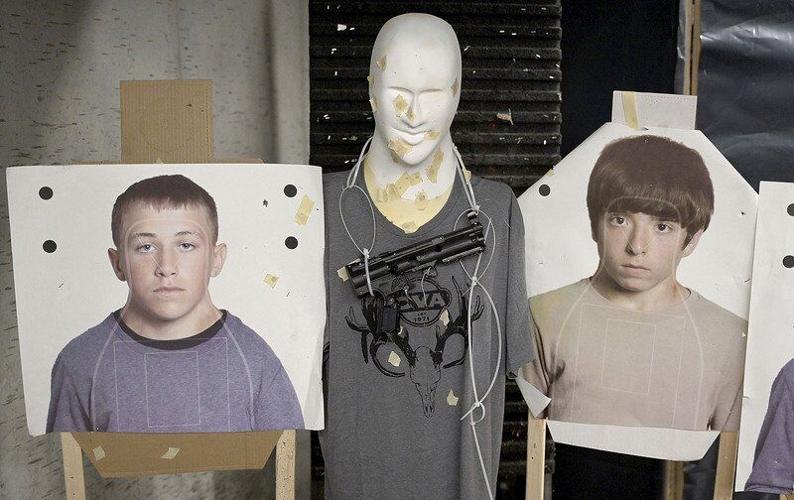 Tribune-Star/Joseph C. GarzaUnpleasant, but a reality: A mannequin representing an active shooter stands between pictures of children on Wednesday at Top Guns. Vigo County School Corp. school protection officers faced this scenario and others during training on Wednesday.

“If we have a shooter, go directly to the shooter and take them out,” John Hopper, the Vigo County School Corporation’s administrative school protection officer (SPO), told a classroom of other SPO’s Wednesday afternoon at Top Guns Training Academy.

The VCSC’s aggressive security protocol is a direct response to May’s mass shooting at Robb Elementary School in Uvalde, Texas. Two teachers and 19 students were slain when police took 70 minutes to respond to the mayhem. The new protocol ensures that schools here will not experience a lackadaisical response resulting in tragedy.

Learning from the Texas “screw-up is (to) our benefit,” Hopper said. “We don’t want to be Texas at all.”

In an interview later, Hopper elaborated. “We are trying to be preventative versus reactionary, and with this training, it gives us a little bit of a boost,” he said. “It benefits us, it benefits the school corporation, it benefits the children within this corporation. We need to make sure these 16,000 kids are all safe.”

Hopper and Kurt Brinegar, VCSC’s coordinator of safety and security, began work on the revised protocol shortly after the school year ended.

“It came together within the last month,” said Hopper. “We got it set up, and we’re good to go now.”

In 32 years with the Terre Haute Police Department, Hopper — who is now also a special deputy with the Vigo County Sheriff’s Department — never had to use his gun, although he had some perilously close calls.

Brinegar killed one man during his tenure as an officer, firing one shot in self-defense in 2015.

The officers were being trained how to respond to an active shooter training in a live-fire interactive shoot house designed to look like the interior of a school at Top Guns, 5050 S. Seventh St., Terre Haute.

Trainers judged the officers on how they responded in a chaotic atmosphere as well as on their muzzle discipline — not pointing their weapons at innocent targets.

“Assess everything you see,” Hopper ordered the SPO’s. “Deal with it as you feel you should.”

Top Guns provided VCSC with its facility, as well as employees who assisted with the training, at a sizable discount.

“This is excellent training,” Hopper said. “It’s keeping us on our toes, it’s teaching us what we need to do, what we don’t need to do. Top Guns are more concerned with us receiving the training versus them making a big profit.”

SPO’s approach to the job must be stern and unambiguously proactive, Hopper said.

“The main thing you need to do, mindset-wise, is you have to be willing to, if needed, take a life,” said Hopper. “That’s what it boils down to. You have to have that mindset to take someone’s life away from them, be it male or female, as callous as it sounds.

“It’s the world we live in now, unfortunately.”

He summed up his philosophy: “The mindset’s everything — if you don’t think you can pull that trigger, then find another job, because that’s what we’re here for.”

SPO’s received their training in two groups — one which met at Terre Haute South High School in the morning and Top Guns in the afternoon and another that reversed that order.

At Terre Haute South, they practiced an active shooter drill with no live ammo; at Top Guns, each was given 10 live rounds.

“If you need more, you’re doing something wrong,” Hopper told them.

Inside Top Guns’ shoot house, the exercise’s objective was for SPO’s to be in constant motion, understanding that the shooter has commenced his spree with the shooter already having the attitude of “I’m not getting out of this.”

Screaming and gunfire emanated from speakers upon entering the shoot house. The first thing an officer encountered was a dummy lying on the floor, with a sign indicating that it was a victim who was bleeding out. SPOs were supposed to bypass the victim.

“That is to see if anyone stops — they’re not supposed to,” Hopper explained. “I don’t care if they’re grabbing you on the leg and pleading with you. You’re not going to do them any good unless you take out that threat. There will be people coming in behind you who can pick up the pieces. The main objective is to take that threat out.”

The next thing encountered was classroom door that was closed and barricaded, which was also to be bypassed since no gunshots were coming from inside it.

The first target for SPO’s to take out was at the end of the hall; a second appeared in the first classroom entered.

Classrooms had some desks and chairs overturned and were filled with photos of students at which SPO’s were to avoid pointing their weapons. An explosive device sat atop a desk; dealing with it was of less importance than confronting the two last shooters in yet another classroom.

Katie Sears, an SPO at Honey Creek Middle School, said she had not had any in-house training like this before.

“When you first walk in, it’s very loud and kind of throws you off course,” she said. “You have to make sure that your head is on straight, that you know where you’re going and you check all of your surroundings. There’s sounds, there’s things you see that you wouldn’t usually see, even in a regular school. This is what you need to realize, that this is what’s expected if something actually happens. Everything’s going to pop up that you don’t realize is happening.”

Sears assessed her performance: “I did OK. I could’ve done better, if I had known exactly what I was going to do, but that’s kind of the point — you don’t know what’s going to happen. For not having done it before, I think I did a pretty good job.”

Sears reported that she hit three out of the four targets, some more effectively than others.

“There was one, I didn’t even realize he was standing there,” she admitted. “You really have to check your surroundings, because you don’t know what’s down the hallway from you. Especially at a school — they can pop out from anywhere.”

There are other new provisions in VCSC’s security protocol. Instead of buzzing them in, SPO’s must meet every visitor at the door. No one can venture any further in the school than the vestibule.

No one can roam the halls anymore — if a husband is meeting his employee wife for lunch, she will be summoned to meet and escort him around the school. And, if a spouse is visiting, SPO’s must ask if they’re going through a divorce.

That rule was inspired by an incident last year when a couple was going through a divorce and the husband had a gun on him when he visited the school. He was stopped by an alert SPO.

Teachers will be taught how to handle school shootings with a process called ALICE: Alert, Locate, Inform, Counter, Evacuate.

“Counter” doesn’t necessarily mean fighting the shooter, but employing techniques that will distract him.

For Hopper, protecting students is more than a job — it’s a calling.

“We don’t make a whole lot of money, but it’s decent money,” said Hopper. “The kids are the reason why we do this — it’s not the money, it’s the kids.”

The Vigo County School Corp. will observe a two-hour, board approved delay on Sept. 19.