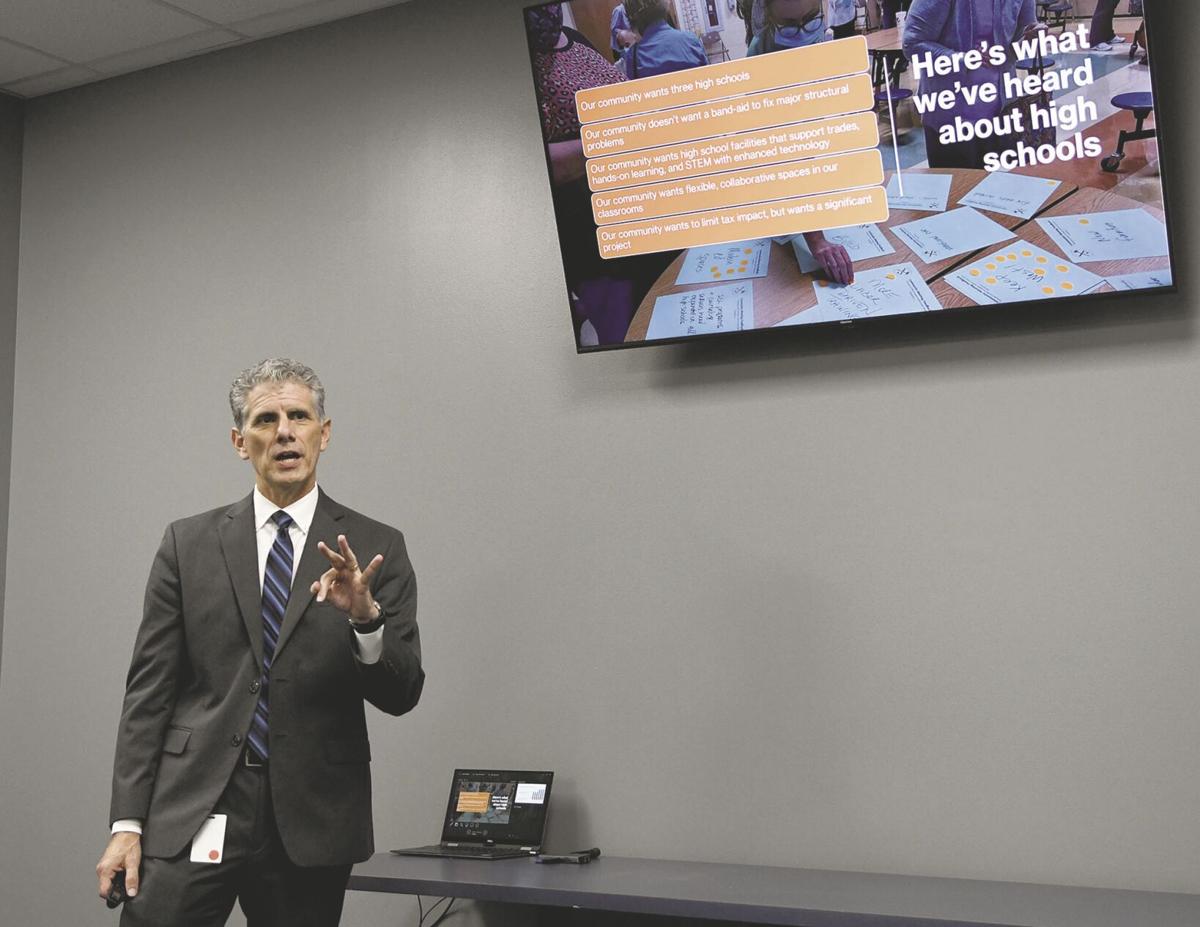 Tribune-Star/Joseph C. Garza Keep the three: Vigo County School Corporation Superintendent Rob Haworth shares the feedback he received from the public on the future of the three county high schools: keep all three. Haworth shared the corporation's proposed amended strategic plan during a news conference on Tuesday at the VCSC administration building in West Terre Haute. 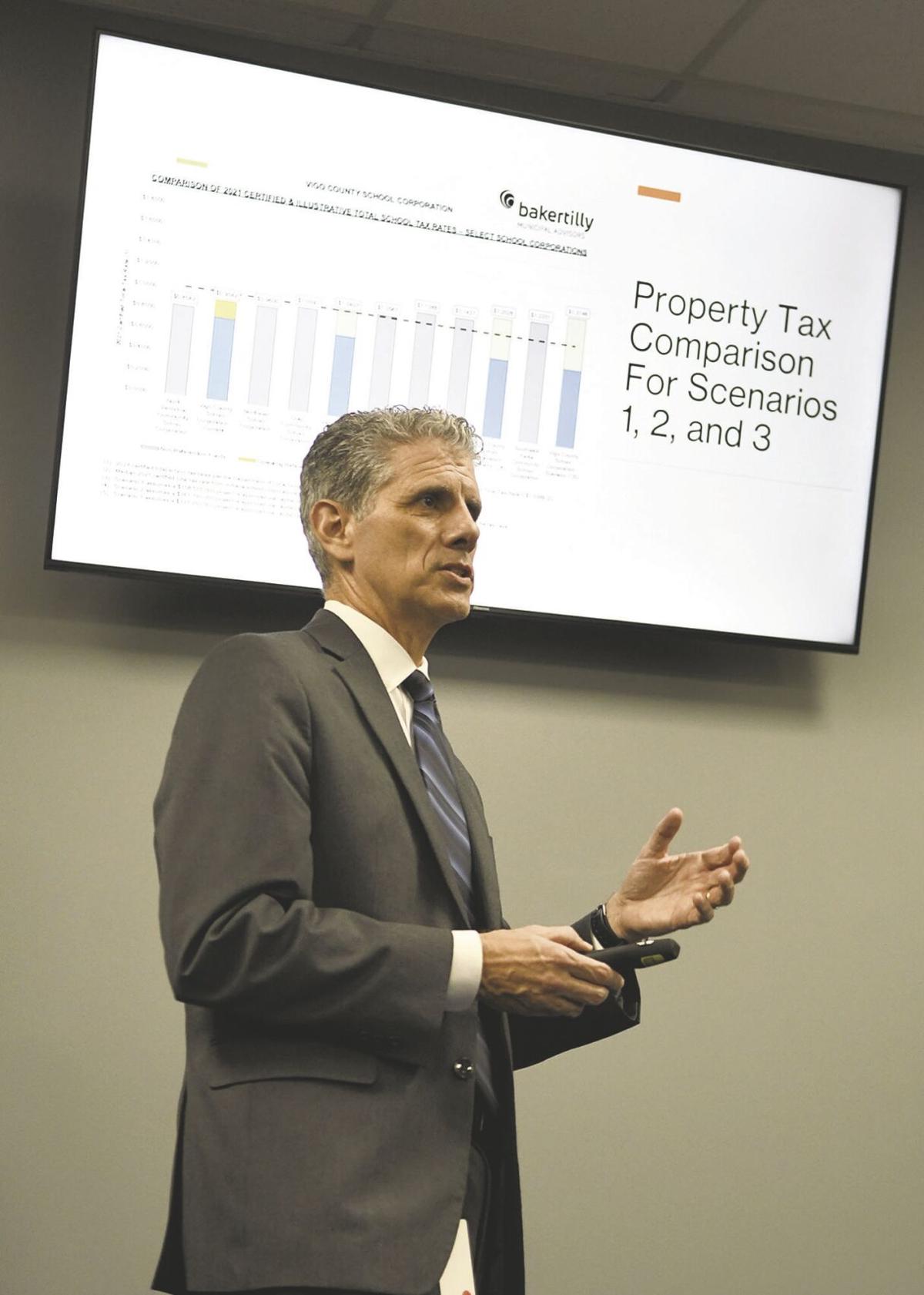 Tribune-Star/Joseph C. Garza Taking a closer look: Rob Haworth, superintendent of the Vigo County School Corporation, dives into the details of the three property tax possibilities for each proposed plan during his presentation on Tuesday at the corporation's administration building in West Terre Haute.

Tribune-Star/Joseph C. Garza Keep the three: Vigo County School Corporation Superintendent Rob Haworth shares the feedback he received from the public on the future of the three county high schools: keep all three. Haworth shared the corporation's proposed amended strategic plan during a news conference on Tuesday at the VCSC administration building in West Terre Haute.

Tribune-Star/Joseph C. Garza Taking a closer look: Rob Haworth, superintendent of the Vigo County School Corporation, dives into the details of the three property tax possibilities for each proposed plan during his presentation on Tuesday at the corporation's administration building in West Terre Haute.

This story was updated at 6 p.m. with additional reporting.

All three would maintain North, South and West Vigo at their current campuses — with two options calling for new construction/renovation and the third calling for new schools at each campus.

The two new construction/renovation options are similar except that one calls for a larger referendum amount so that all three projects could be done at once.

"Our goal is to try to bring a project forward we think our community will rally behind," Superintendent Rob Haworth said recently. "It is our goal, if we believe between now and Jan. 1 that our community wants us to pursue a referendum, we will [conduct one] in May."

The district also proposes ending its operational referendum — approved by voters in the fall of 2019 — earlier than scheduled, with federal ESSER funds filling the gap. It's also possible to do so because the district has been reducing operating costs and it's been able to pay for its technology plan through federal CARES Act/ESSER dollars.

By ending the operating referendum in 2024 instead of 2027, that would free up the 16.2-cent referendum tax rate to be used toward a building program, and limiting additional tax impact could help the district win a building referendum, officials say.

A building project is not just about facility needs," Haworth said during a media briefing Tuesday. "I also think it's about our ability to attract and retain" people to Vigo County. He believes it can help reverse the community's population decline.

The high school building options are as follows:

The option would call for a tax rate of 24.8 cents per $100 assessed value, which is 8.6 cents above what taxpayers currently pay for the operating referendum.

Same construction elements as above, but with a $260 million referendum for new academic spaces and renovated non-academic spaces, with all three schools done at the same time. It would require a referendum of 41 cents, or 24.8 cents above what taxpayers currently pay for the operating referendum.

The scope of the projects in Options 1 and 2 are similar, with $160 million for new academic spaces at the three high schools, and $100 million for renovated co-curricular spaces, said Bill Riley, VCSC director of communications.

However, Option 2 would be one cohesive project using a $260 million referendum.

Option 1 would use a $160 million referendum and $100 million through debt service and short term bonds to renovate spaces over time without raising the current debt service tax rate. "It's bound to be a more difficult way to go that will be slow and ultimately not quite look the same as with Option 2," Riley said.

Under Option 2, by doing it all through referendum funds, "We can do all the renovation at once. We can't do a $100 million renovation in Option 1 all at once. It would have to be different projects, distinct projects, and it has to be over time," Riley said.

In summary: "Same project. Different way to fund it. Different timeline," Riley said. With both options, new academic construction would take place at the same time, and those academic facilities would be built outside the footprint of the current buildings.

Also, by having a $260 million referendum for Option 2, the district could pay for facility projects at other schools and not exceed the current debt service tax rate.

Option 3 calls for new schools on current campuses at North, South and West Vigo and involves a $333 million referendum. It would require a referendum tax rate of 52 cents, which is 36 cents more than the current operating referendum impact. Everything in the schools would be new.

The district also provided possible taxpayer impact from the additional tax rate brought on by a proposed building referendum.

Haworth suggested that some non-academic spaces could be consolidated into one location, and involve partners, such as a performing arts center.

The district will present the three high school scenarios at several upcoming community meetings, and Haworth hopes to gauge public support for a building referendum. It also will do phone polling and use a digital tool called "Thought Exchange" to get community feedback.

Haworth hopes to arrive at one scenario by late December or early January, but first the district must determine if there is public support.

Through past community meetings and other means of public feedback, the district has heard the following: The community wants three high schools, and it does not want a "band-aid" approach to fix major structural problems.

In addition, the community wants to limit tax impact, but it wants a significant project.

Going forward, "Our job is to determine what project our community wants and will pay for," Haworth said.

Many in the community have said they want three brand new high schools, and with options now narrowed, the district seeks to educate people on what that will cost, Haworth said.

All three options are significant and "will meet the issues of the day," he said. With information about the options, costs and tax impacts, the public can determine "is there a dollar amount threshold that is important to you, and if there is, which option fits that threshold. "