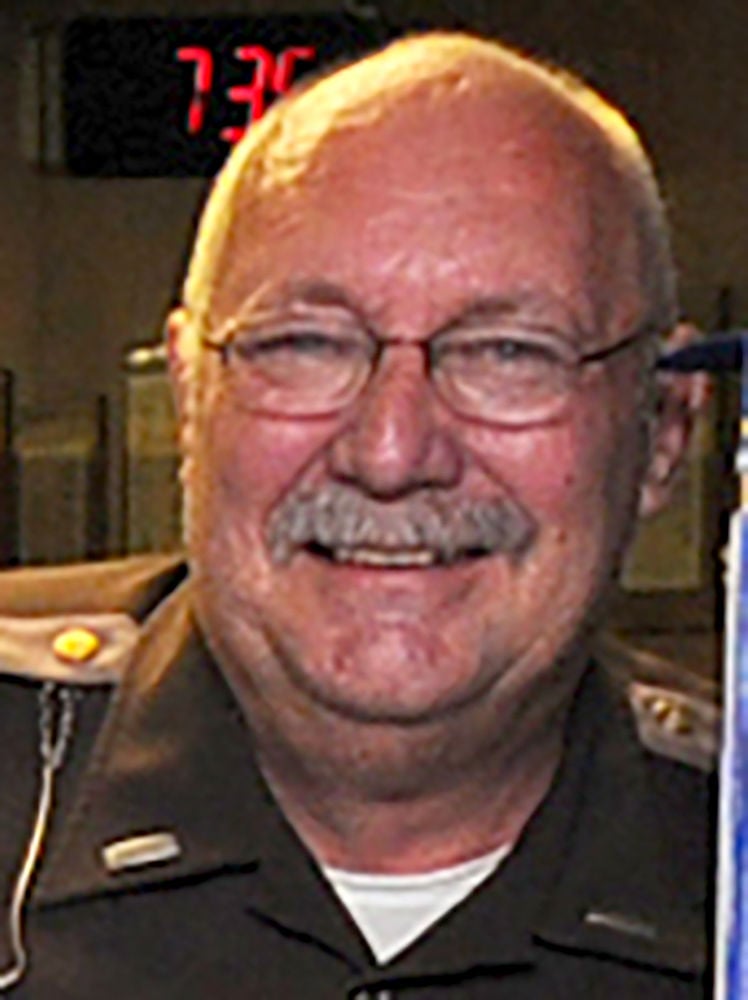 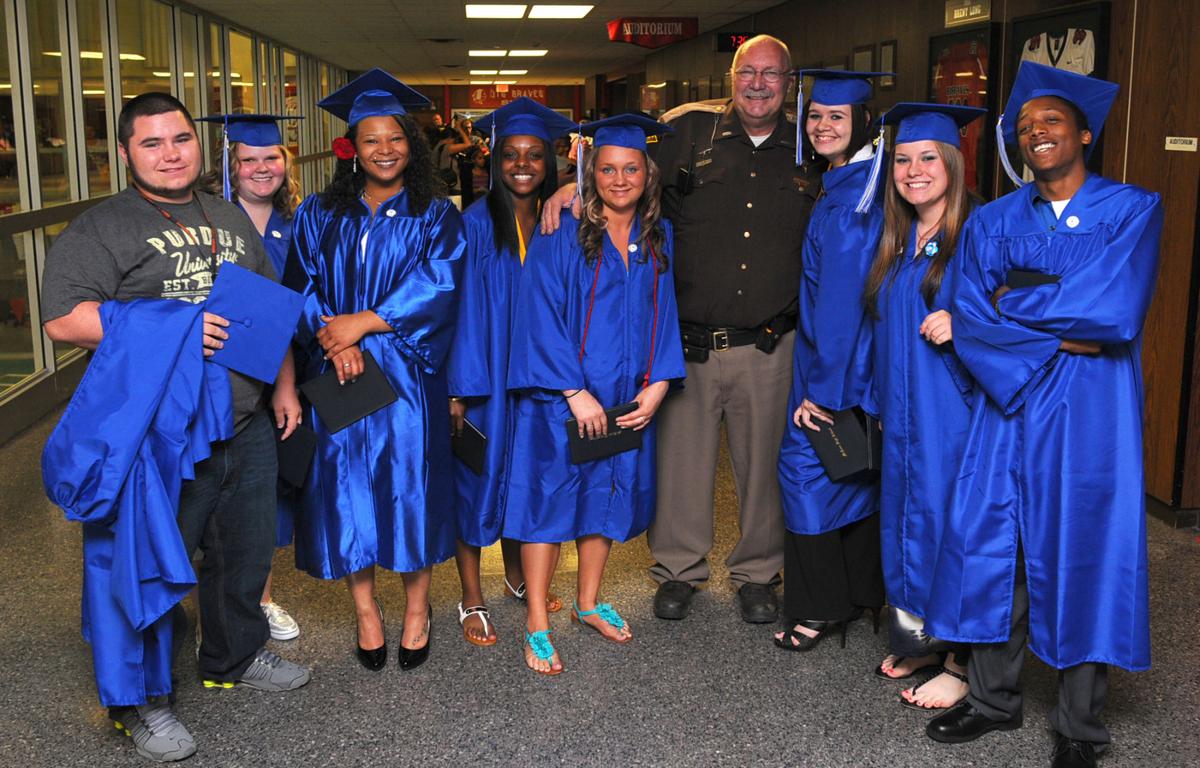 Graduation: Lt. Mike Anderson of the Vigo County Sheriff’s department poses with a group of McLean graduates at Terre Haute South in 2013.

A longtime Vigo County sheriff's deputy and school resource officer for the county school corporation is no longer working for the schools after making inflammatory posts on his Facebook page, including posts in support of the Confederate battle flag. 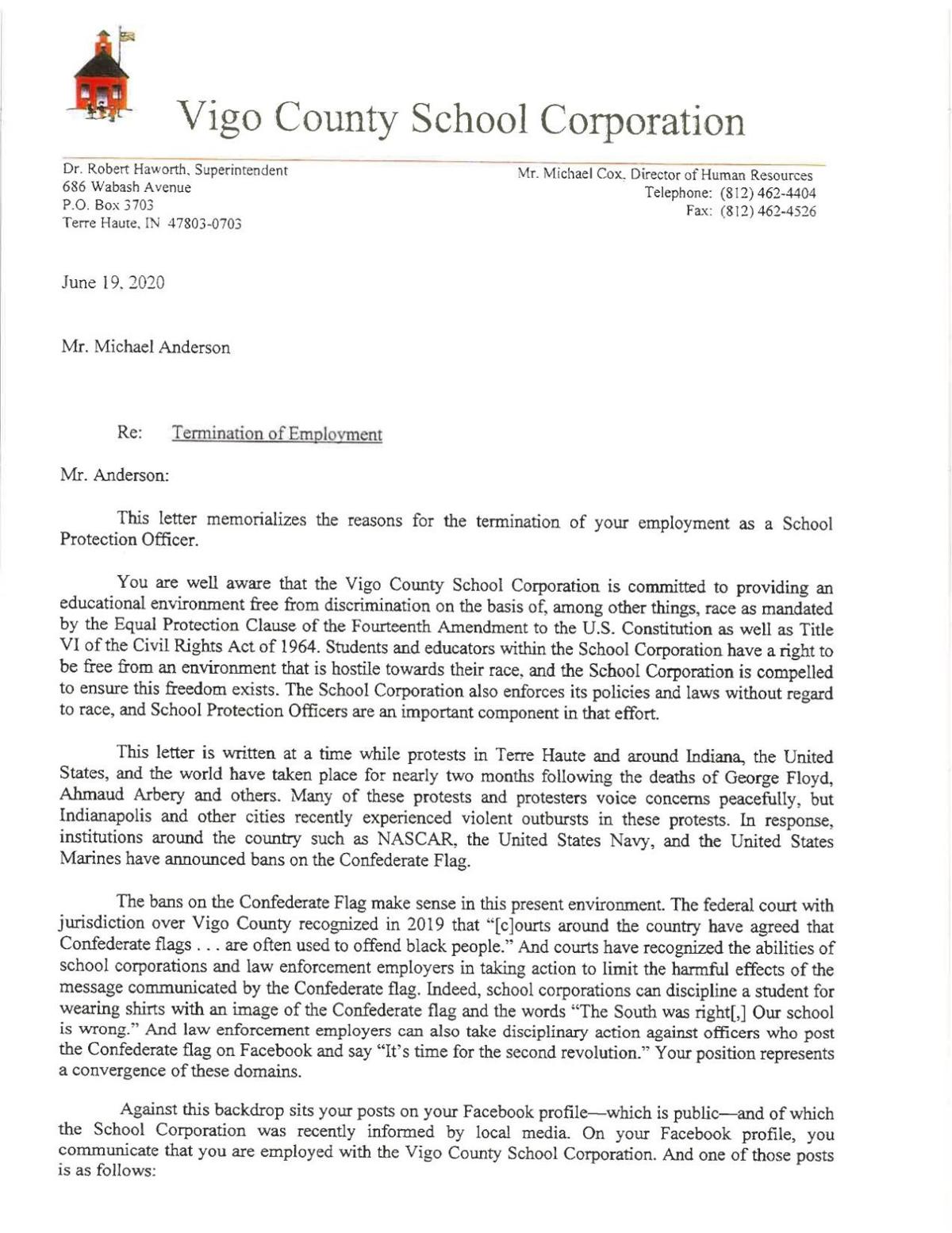 He declined to say why, citing personnel policy. The Tribune-Star newspaper then filed a public information request seeking Anderson's disciplinary record and/or reason for his termination from the school corporation.

In response to that request, the school corporation released the termination letter dated June 19 that it sent to Anderson.

Among other things, it cites the current turmoil in the county, state and nation and Anderson's frequently avowed support for the Confederate battle flag, including one Facebook post in which he posted a photo of Civil War re-enactors containing overlay text of "It's not just about history ... the South was right!"

Anderson's own header on that post said, "total agree."

The letter cited the school corporation's commitment to providing an educational environment free from discrimination, and it cites recent bans on the Confederate flag by the U.S. Navy, U.S. Marine Corps and NASCAR. The letter includes the image posted by Anderson regarding “The South Was Right!”

Anderson has four decades with the Vigo County Sheriff's Office and several years with the school district. He is a lieutenant with the sheriff's office and remains on the job.

The Tribune-Star on Friday attempted, without success, to reach Anderson by social media message, telephone and in person at his residence.

The Facebook posts were brought to the attention of the school corporation, the sheriff's office and local media by Lyman Roberts.

Roberts distributed a packet of screen captures going back several years. The images, photographs and memes posted or recirculated by Anderson indicate he is a both an ardent supporter of the Confederate battle flag and Second Amendment rights, including the "Come and take them" sentiment.

For instance, one post is an illustration of a Confederate cavalry officer loading a revolver with the battle flag as the backdrop. The text on that illustration says, "I don't believe you will be taking my flag today, nor my guns."

Anderson apparently put a header on the post of, "Or any day ... period."

Other posts concerning the Confederate flag or Confederacy argue that slavery was not the issue in the Civil War, but that the war was over Northern aggression and states' rights. In others, Anderson advocates support for the Confederate flag, devotion to it and flying it along with the American flag.

Regarding gun rights, Anderson says in one post, "Come try [to] take my legal guns (which won't happen) you would have a bad day."

About Chicago, he says, "Only good thing about Chicago and the Politics is that they are letting guns in, and drugs, and they are killing each other over them. Sad a city with strict gun laws has more shootings and killing in a week end then most cities do in years."

Other posts are racially or ethnically charged.

For instance, several include the "Spanish Word of the Day" memes, in which common English words are misapplied as if spoken by a non-native speaker of English.

Another shows an old photo of a jail or prison inmate getting a haircut from another inmate in a large common cell. In that photo, the faces of Bill Cosby and Jussie Smollett, who are Black, are pasted on the inmates.

The header by Anderson is "hollywood hilton prison and brothers taking a break."

Other images shared on Anderson's page show images of Black men doing manual farm labor while overseen by white foremen or guards and contain the header, "the old days ... check it out."

Another shows then-Green Bay Packers linebacker Clay Matthews, who is white, on top of then-San Francisco 49ers quarterback Colin Kaepernick, who is Black and known for beginning the NFL kneeling protest.

The text says, "Enjoy this photo of Colin Kapernick [sic] being oppressed by white people."

The posts, which were still publicly viewable a week or 10 days ago, have since been taken down.

Sheriff John Plasse said he reviewed the posts and talked to Anderson last week, adding he does not condone the messages expressed.

“Nothing he posted is a violation of our policy,” Plasse said Friday, but the sheriff added deputies “should be careful not to post things the public finds offensive.”

Anderson faces no discipline in this instance, Plasse said.

“It erodes the public trust when you see someone sworn to serve and protect who posts something like that," Plasse said. "It casts a shade on law enforcement and our department as a whole.”

The current climate in the nation of addressing racism and police brutality have heightened public scrutiny of law enforcement and public figures, Plasse said, and "every little thing adds up and erodes public trust.”

The sheriff said he first learned of the posts last week from Roberts.

Plasse said he asked Roberts to fill out a complaint form, but instead, Roberts dropped off a packet of images copied from Anderson's Facebook page.

Since then, Anderson has been terminated as a school protection officer by the Vigo County School Corp., which hires those officers.

Plasse said Anderson worked for the school district outside his regular duties as a merit deputy.

Plasse said Anderson has unrelated disciplinary actions in his personnel file. The sheriff said Anderson was disciplined 25 years ago for making an inappropriate comment to minority students.

In that incident, he made remarks about "'this side of the river' and about the (students') braided hair which has no bearing on the admission of the two students to the ballgame."

In the last 18 months, Anderson has had disciplinary write-ups concerning care of equipment and collection of evidence.

Plasse said the department's policy on social media use by deputies and department employees will be reviewed to see if wording can be changed to discourage inflammatory postings.

“We have to be careful with it,” Plasse said. “We don't want to infringe on anyone's First Amendment rights to free speech, and we don't want to do a knee-jerk reaction on this."

Lyman Roberts acknowledged distributing the packet of photocopies of Facebook posts, first to the media on June 10.

On June 12, he sent out 40 packets to recipients including the NAACP, Vigo County office holders, the sheriff's office, the governor, Vigo County School Corp. and at least some VCSC school board members, he said. He added he plans to send those packets to every county sheriff in Indiana.

Roberts alleges racism on Anderson's part and said, "He's messed with me forever and I'm tired of it."

Both men are white.

Roberts said after he mailed the packets, Anderson showed up at his house last week — in uniform and in a sheriff's vehicle — "asking me questions about this packet and harassing me."

The two men have had conflicts over multiple issues going back several years, including Bethesda Cemetery in West Terre Haute — where both have served on the board — as well as over a political sign in front of Roberts' home, Roberts said.

Roberts also has a Vigo County 2015 Class D felony conviction for theft in connection with uncompleted work contracted by United Way in wake of the 2008 floods. Separate charges of forgery in relation to a dispute between Roberts and the Sons of Amvets were dismissed as part of a plea agreement.

"Either the school corporation is right by doing this and (Sheriff) Plasse is wrong, or Plasse is right and the Vigo County School Corp. is wrong," Roberts said Friday. Anderson "needs to retire and be done with it. ... I'm not giving up until he is retired."

While Anderson has free speech rights, he also is held to a higher standard because of his employment, his authority and a deputy's duty to all citizens, Roberts argued.

Roberts suggests Anderson's views can or do impact how he responds to incidents involving Black residents.

As to whether his complaint is personally motivated, Roberts said that while it might be, that doesn't make him incorrect.

A longtime deputy enmeshed in turmoil over his personal Facebook posts has turned in his retirement papers at the Vigo County Sheriff's Office.