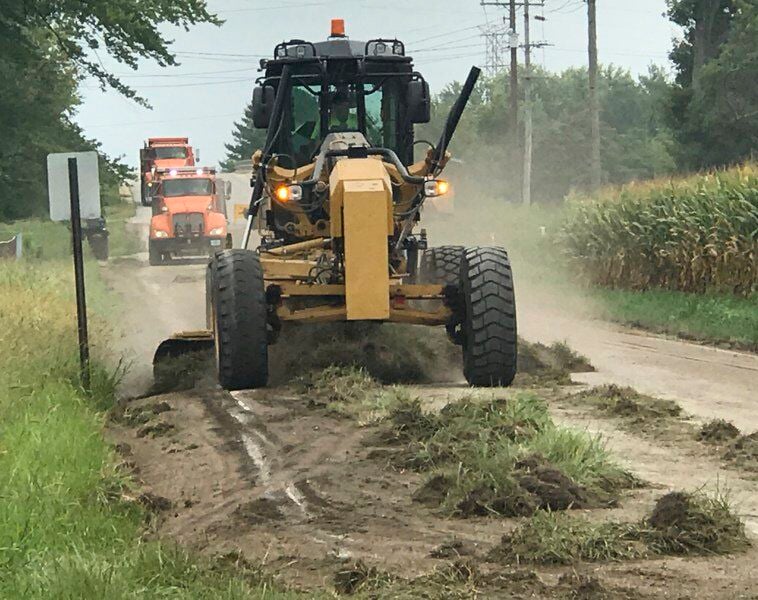 Tribune-Star/Howard GreningerGrader work: A Vigo County road grader cleans out the shoulder along Frye Road near Margaret Avenue on Thursday in preparation for paving next week. The work is part of the county’s road improvements using Indiana’s Community Crossroads grant funds. 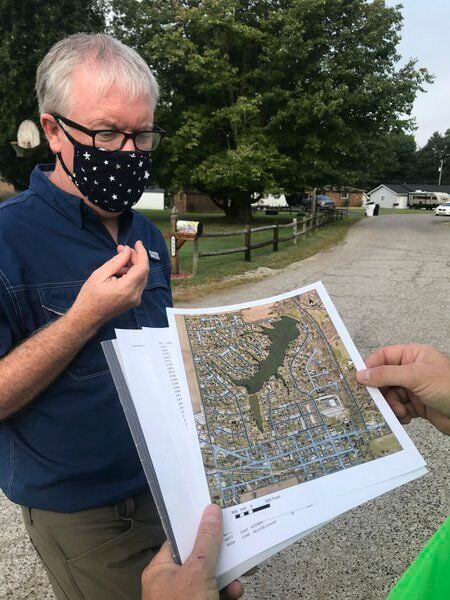 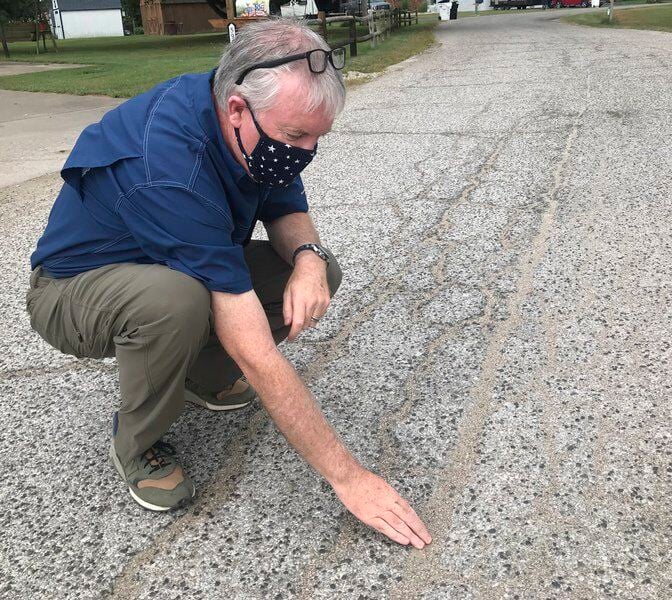 Tribune-Star/Howard GreningerRough road: Vigo County Commissioner Brendan Kearns inspects “alligator cracks” along South Canal Street in Lakewood subdivision. The road is under consideration for repaving this year, with other sections of the subdivision slated for improvements next year. 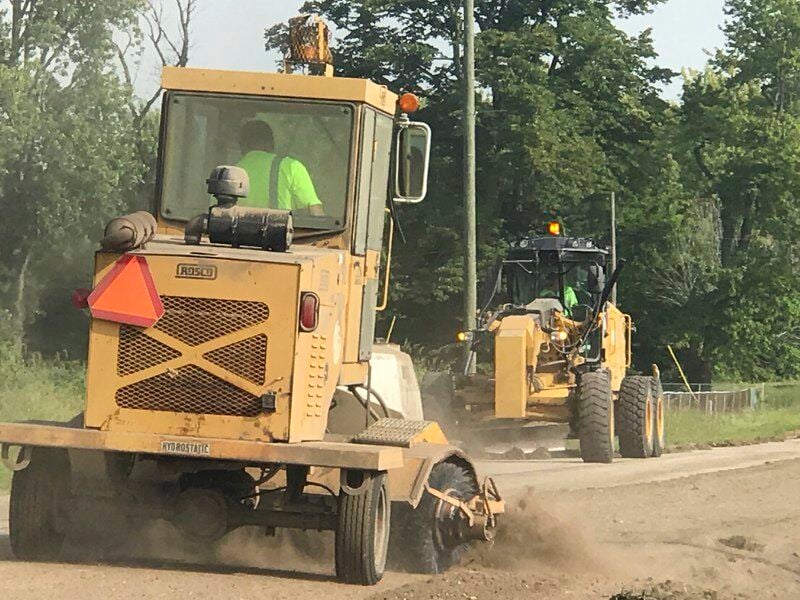 Tribune-Star/Howard GreningerGrader work: A Vigo County road grader cleans out the shoulder along Frye Road near Margaret Avenue on Thursday in preparation for paving next week. The work is part of the county’s road improvements using Indiana’s Community Crossroads grant funds.

As a road grader removed sod to clear out and push back the edge of Frye Road, and a road sweeper cleared the remaining dirt, Commissioner Brendan Kearns and Larry Robbins, county engineer/highway director, discussed paving schedules on Thursday.

Frye Road is one of seven roads the county will repave this year — at just over 22 miles — in part with matching funds from Indiana’s Community Crossing grant as well as from the county’s motor vehicle highway, cumulative bridge and economic development income tax funds.

In all, the county is spending $6.5 million to repave between 65 and 67 miles this year, before the snow flies.

“Community Crossings covers the asphalt component, but this is the county, the machinery and manpower, doing the improvements before hand,” Kearns said, standing along Frye Road as county dump trucks passed.

A large section of Frye Road is to be paved next week. Improvements extend from Indiana 46 to Margaret Avenue.

“We had kind of a rough start this year with the [COVID-19] virus and everything going on, and we got behind on mowing and grading some roads,” Robbins said.

“We had people out that were COVID-related issues” on the highway department, Kearns added.

Robbins said the best way to maintain county roads is to keep water off the road surface.

“We are pulling back these road shoulders and reshaping some of the ditches, to get water to run in the ditch where it is supposed to be instead of out on the road,” Robbins said.

The county, Robbins said, uses a PASER system to evaluate roads. PASER, an acronym for Pavement Surface Evaluation and Rating, is a system to visually rate the surface condition of pavement, from a scale of 1 to 10, with 1 being pavement in a failed condition and 10 being pavement in excellent condition.

The system provides a recommendation for repair. Roads with a rating of 7 to 9 may require chip and seal or a microsurfacing overlay. Get down into a 5 or 6 rating, the road requires deep patching or surface overlay work, while ratings of 4 and 3 require rebuilding the surface with two inches of asphalt overlay. A rating of 2 or 1 is a complete road replacement.

“For new road construction, most of the county roads are four inches [of asphalt] while others, like Springhill Drive, are up to 10 to 12 inches,” Robbins said.

That rating system is being used on other road work on tap for this year.

Kearns said he is evaluating repaving South Canal Street in Lakewood subdivision, a road that pass in front of Riley Elementary School.

“Since we are paving Frye Road behind [the subdivision] and Louisville Road, this is a good opportunity to keep that momentum going and keep those improvements going,” Kearns said. It costs about $79,000 per mile just for asphalt pavement, excluding road preparation, the commissioner added.

Robbins said South Canal Road had a rating of 5 in 2018, “so it likely has a rating of 4 now,” he said, adding the road has not been improved for about two decades.

Kearns, while inspecting the road, said “this is what is called alligatored. You can see how it kind of looks like an alligator’s back. The problem with this is when water gets in there, those alligator cracks get bigger. In the winter time, that will freeze and pop out that asphalt.”

Robbins suggested a phased improvement for Lakewood subdivision, with improvements done on roads on the east side of the lake this year, with road improvements on the west side next year.

PLAINFIELD [mdash] Linda L. Pennington, 83, of Plainfield, passed away October 23, 2020. Visitation will be from 4:00 pm until the memorial service begins at 7:00 pm in Hall-Baker Funeral Home, Plainfield. Online condolences may be made at: