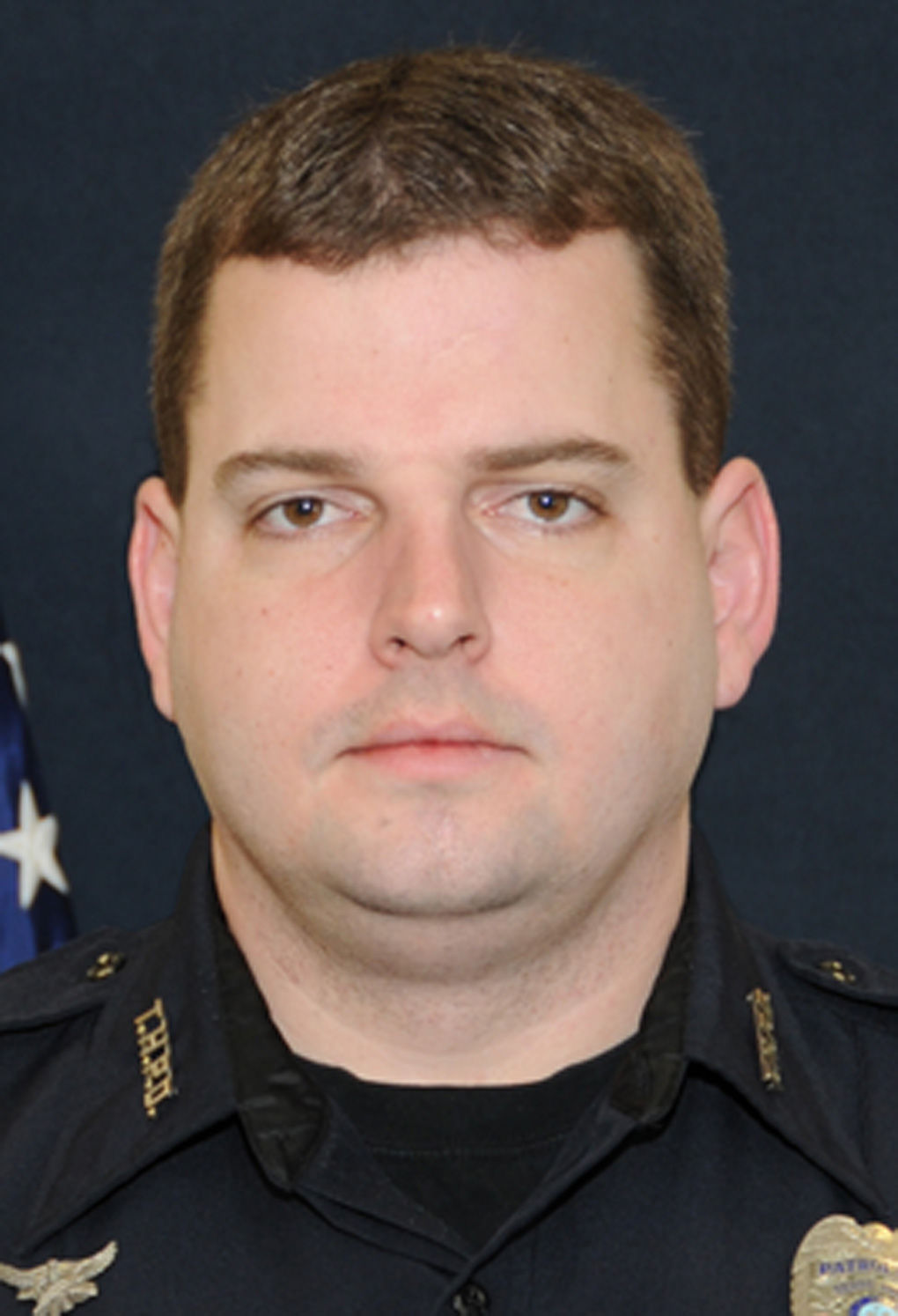 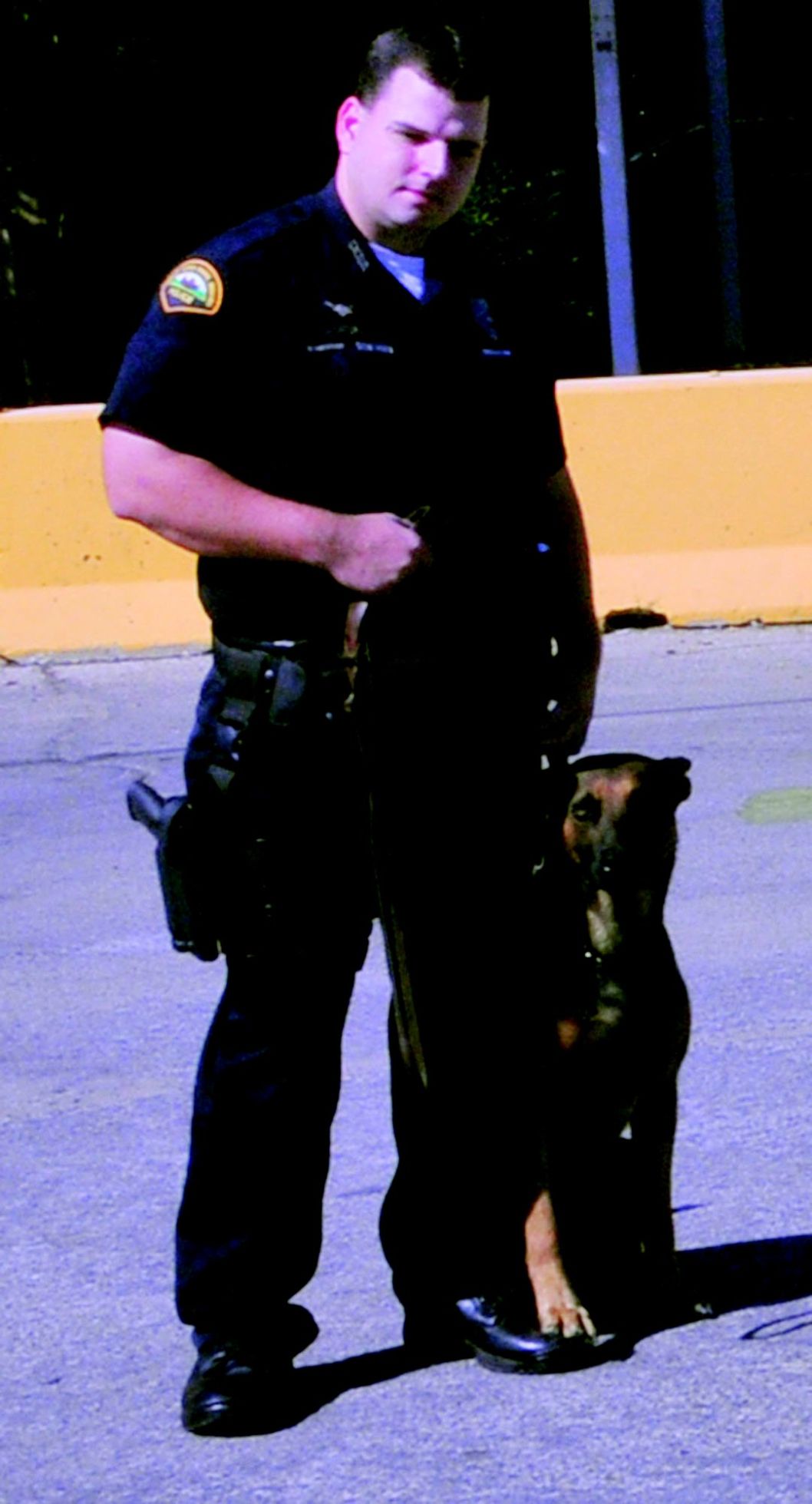 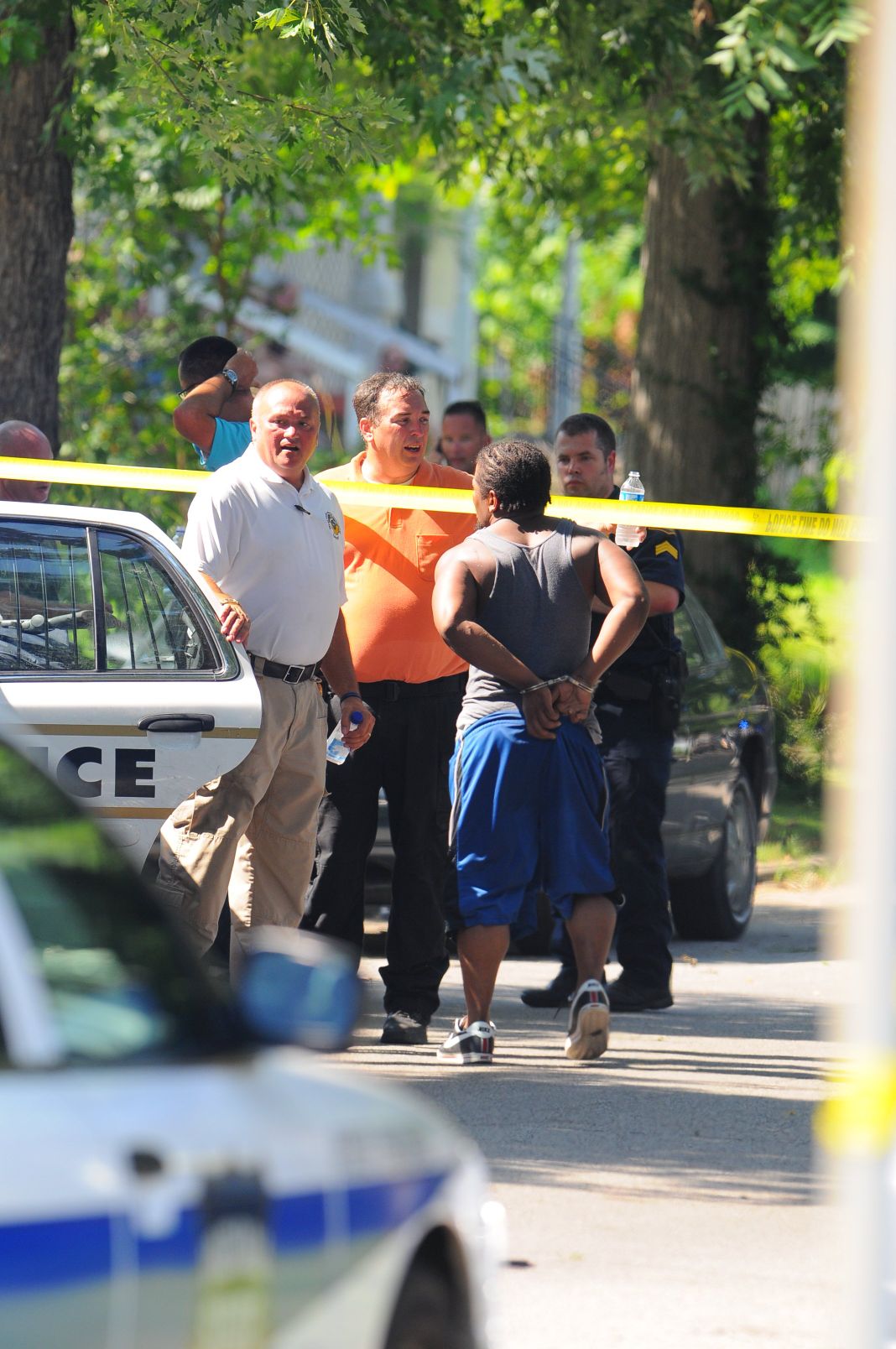 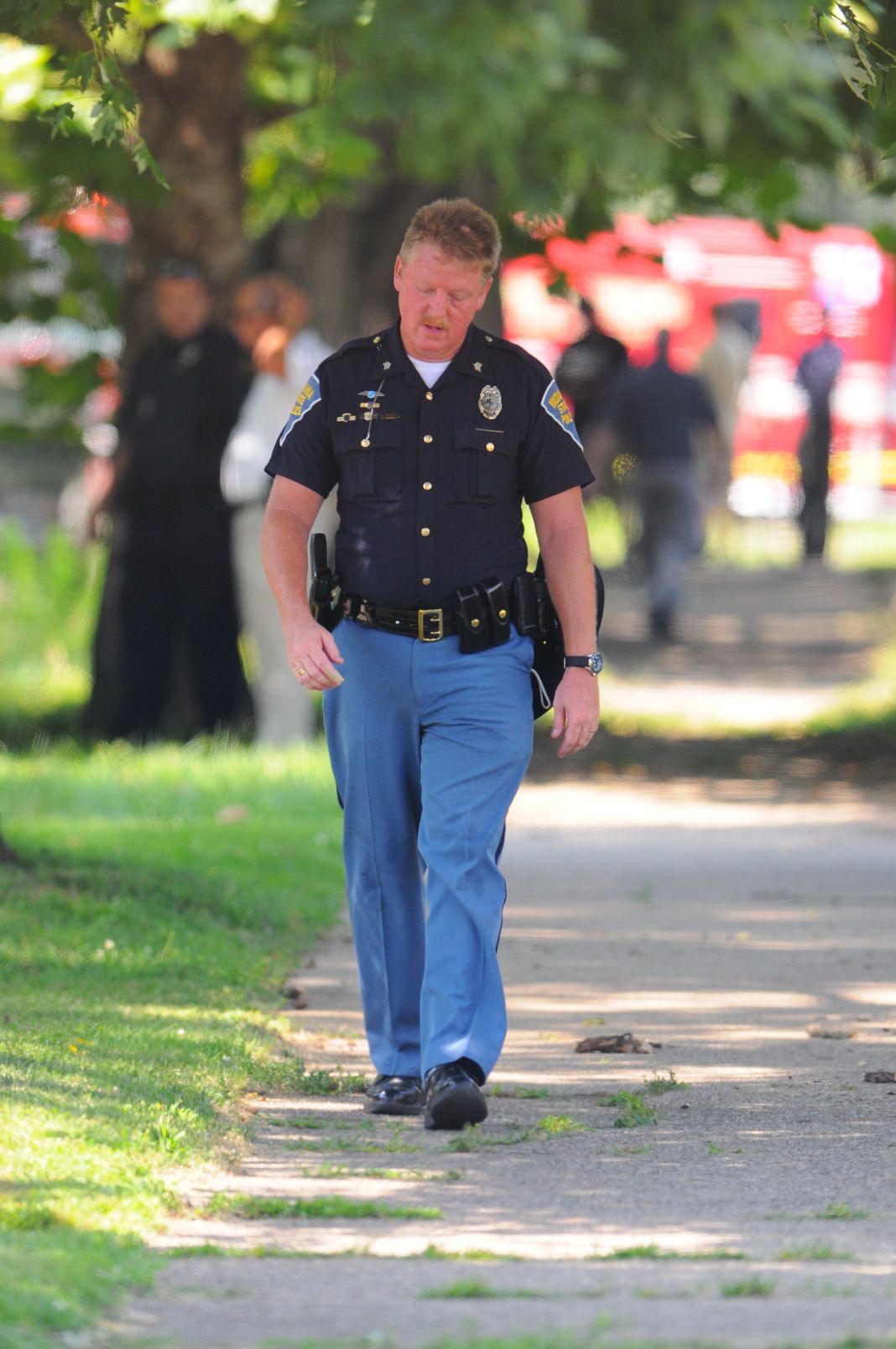 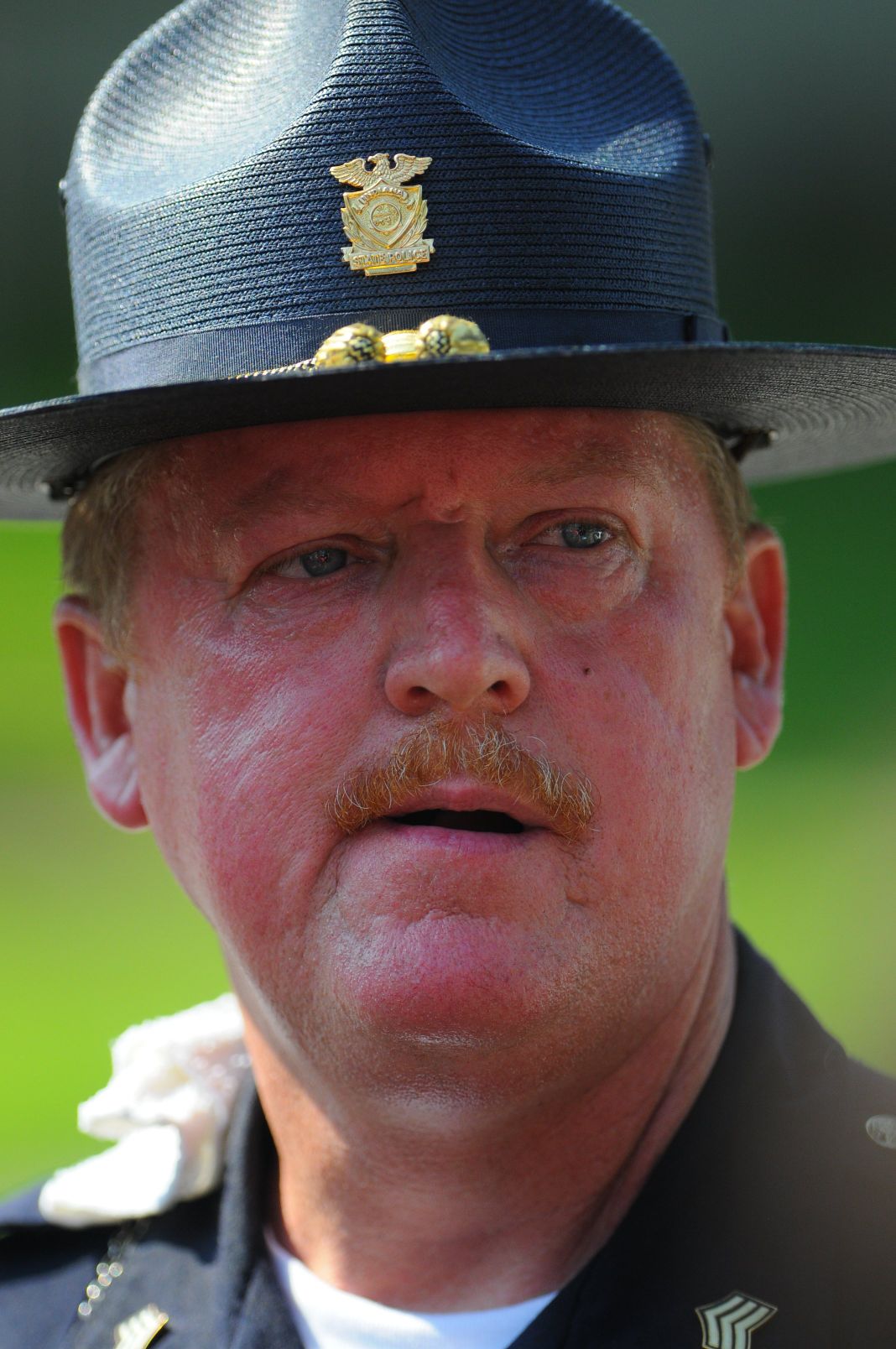 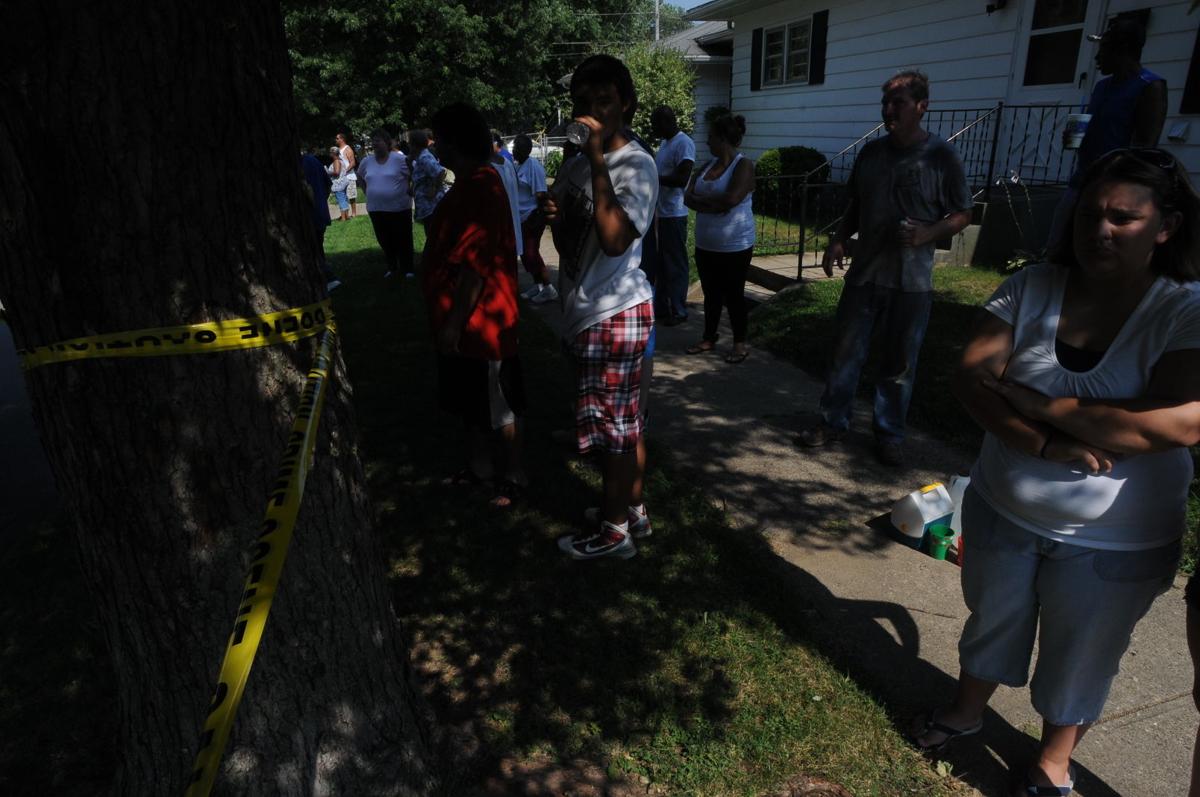 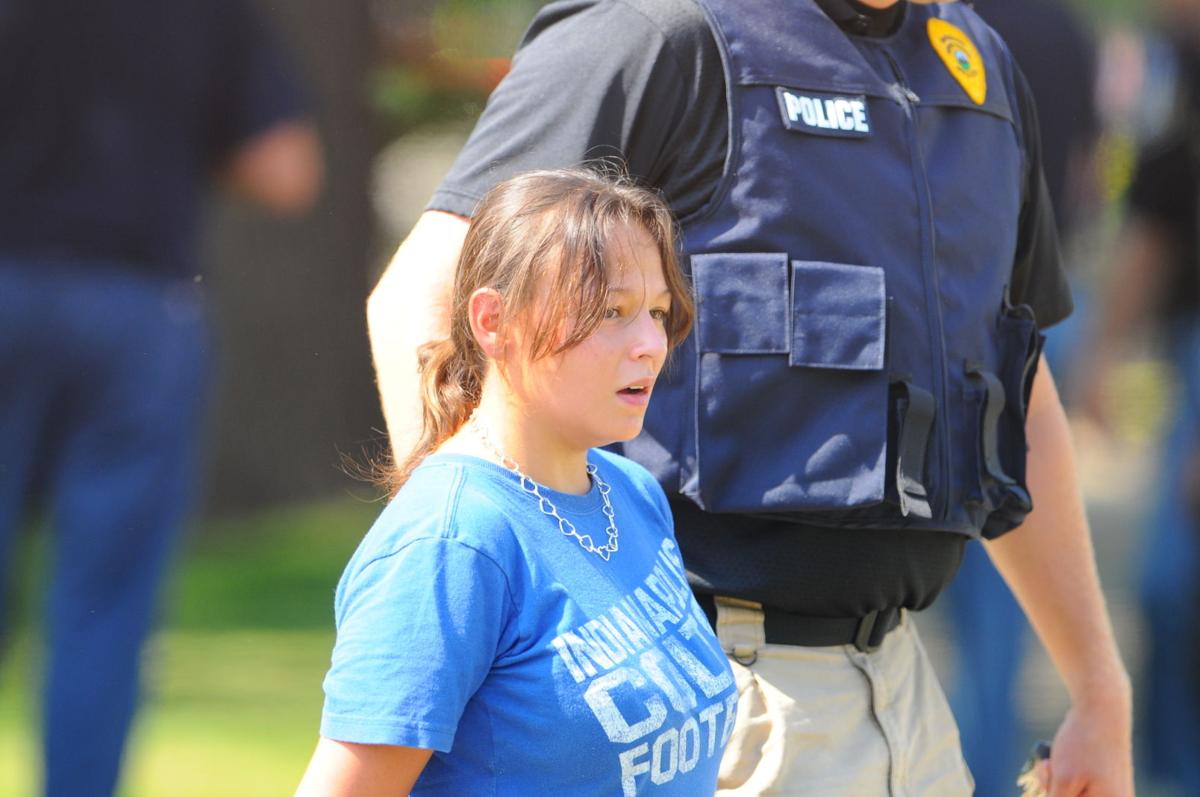 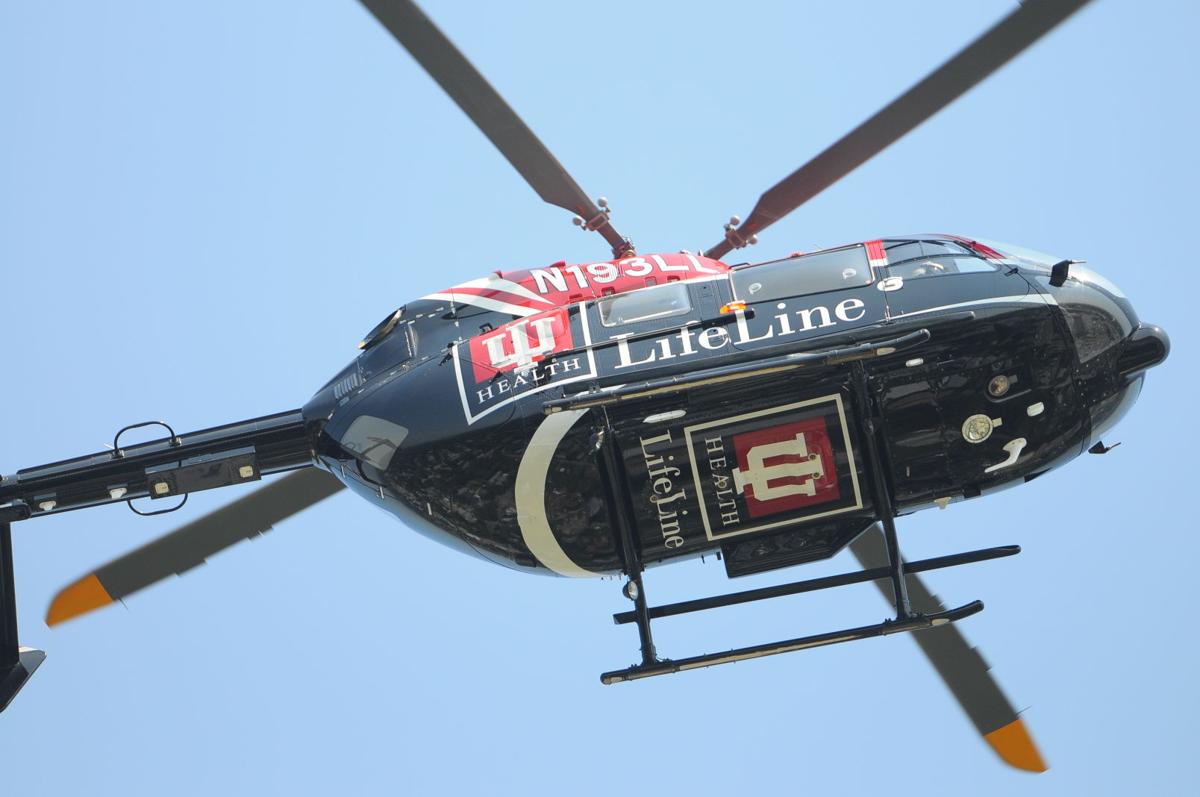 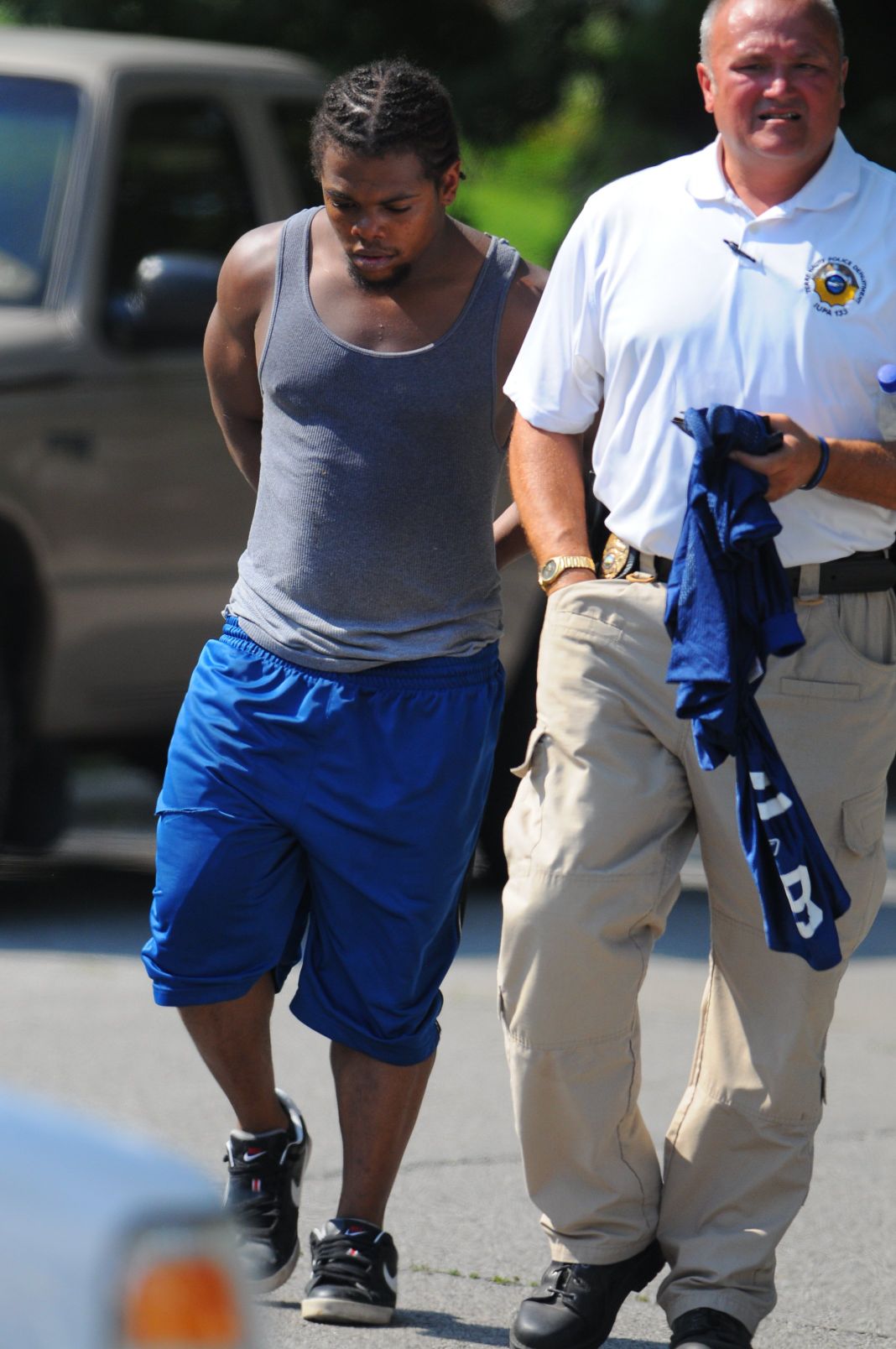 Taken away: Several people were taken away by police after exiting a home on North Eighth Street. Police say none of them were involved in the gun battle at the residence that killed Terre Haute city police officer Brent Long and an unidentified suspect. 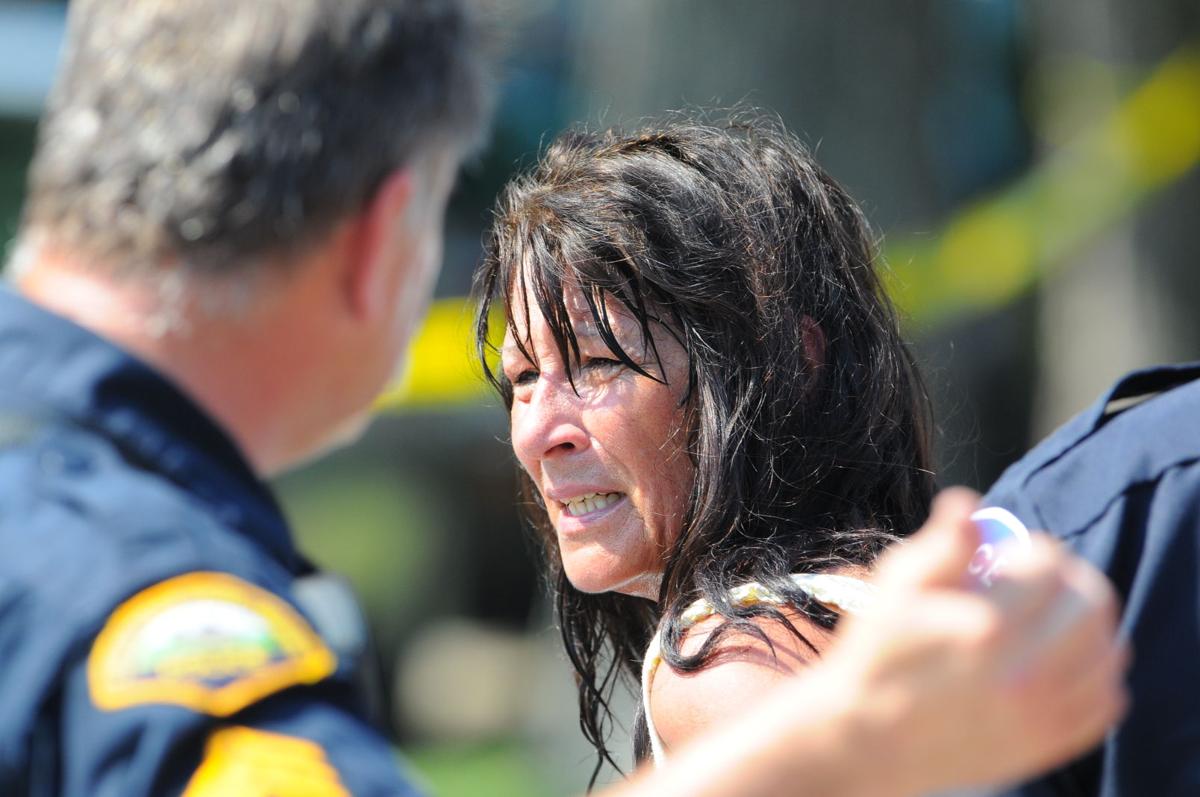 Taken away: Several people were taken away by police after exiting a home on North Eighth Street after Terre Haute city police officer Brent Long was shot and killed and his K-9 partner was shot while serving an arrest warrant at that home.

Taken away: Several people were taken away by police after exiting a home on North Eighth Street. Police say none of them were involved in the gun battle at the residence that killed Terre Haute city police officer Brent Long and an unidentified suspect.

Taken away: Several people were taken away by police after exiting a home on North Eighth Street after Terre Haute city police officer Brent Long was shot and killed and his K-9 partner was shot while serving an arrest warrant at that home.

A terrible tragedy unfolded on Terre Haute’s near-north side Monday afternoon when an officer with the Terre Haute Police Department was killed in the line of duty.

Officer Brent Long, a six-year veteran of the police force, was fatally shot while serving a warrant with the U.S. Marshal’s Fugitive Task Force at 1812 N. Eighth St.

There were several officers making up the task force, including Long, who was accompanied by his trained police dog, K-9 Shadow. The dog was also shot at the scene but reportedly survived, police said.

Long and the other officers were serving a felony warrant for a man who police would later identify as the alleged shooter.

Police said they knew the identity of the shooter, who also died at the scene, but they were not releasing his name as of presstime.

“Shots pretty much immediately rang out against the officers” serving the warrant as soon as they entered the rear of the home, Watts told the media. Long “sustained gunshot wounds at the scene,” said Watts, who declined to give specifics on the officer’s wounds, pending results from the ongoing investigation.

Long was taken to Union Hospital, which is a few blocks to the south of where the incident occurred. He was pronounced dead at the hospital, police said.

Police were not releasing the name of the alleged shooter as of Monday evening pending notification of his relatives. The man is identified as a male believed to be in his 30s. The investigation is being conducted by the Indiana State Police, per request of Terre Haute Police, Watts said.

Strong emotions of shock and grief were obvious on the faces of law enforcement officers at the news conference Monday evening at the THPD headquarters and at the scene of the incident. Watts, a long-time police veteran, struggled to retain his composure while talking about Long’s death.

“The officers entered the residence with the assistance of the K-9 and began looking for the suspect,” Watts said at the news conference.

Six officers entered the residence, Watts said. “When the call went out that there was an officer down … tens of officers from various departments arrived on the scene.”

Investigators believe — preliminarily — that shots were returned from police during the incident, Watts said. It was not immediately known how many shots were fired altogether. “There were multiple shots exchanged inside the residence,” he said. It did not immediately appear any bullets traveled outside the one-and-a-half story home.

It was not immediately clear how the alleged shooter died.

At least two people, a young black male and a white female, were taken from the scene in handcuffs about an hour after the shooting. Police do not believe their arrests were related to the shooting, Watts said.

High temperatures reaching near 100 degrees made conditions difficult for the more than 35 uniformed emergency responders at the scene. Nearby residents brought bottles of water to officers and the American Red Cross also responded. The Prairieton Fire Department provided an air-conditioned bus at the scene.

At least two emergency responders were transported from the scene in ambulances, apparently affected by intense heat.

Yellow police tape blocked off the area north of Ash Street and south of Buckeye Street on North Eighth Street. Police vehicles from several area departments were scattered throughout the area.

The neighborhood around the home where the shooting took place has many well-kept yards and, according to residents, is normally quiet and peaceful. “It’s always been quiet,” said Dawson Weaver, who lives one block from the scene of the incident.

Two ladies who lived within a block of the incident and who did not want to give their names agreed the neighborhood is normally peaceful. “We’ve never had any trouble,” one woman said. “You’re not scared to walk at night. It’s fine.”

The Terre Haute Fire Department provided emergency supplies and services at the scene, including aid for the fallen officer. The Vigo County Sheriff’s Department, the Indiana State University Police, Task Force 7, the FBI and other agencies also responded. Members of the Terre Haute Police Department Tactical Unit entered the residence to remove their fallen comrade after the shooting, Watts said. “It was probably the toughest job they’ve ever had.”

Police officers remained outside the home at 1812 N. Eighth into the night Monday.

“Who would have thought a serious call such as this would happen at 3:30 in the afternoon, broad daylight,” Watts said. “It just goes to show you the environment that we work in.”

“No greater price can be paid for the safety of our community than what was paid [this afternoon],” Watts said.