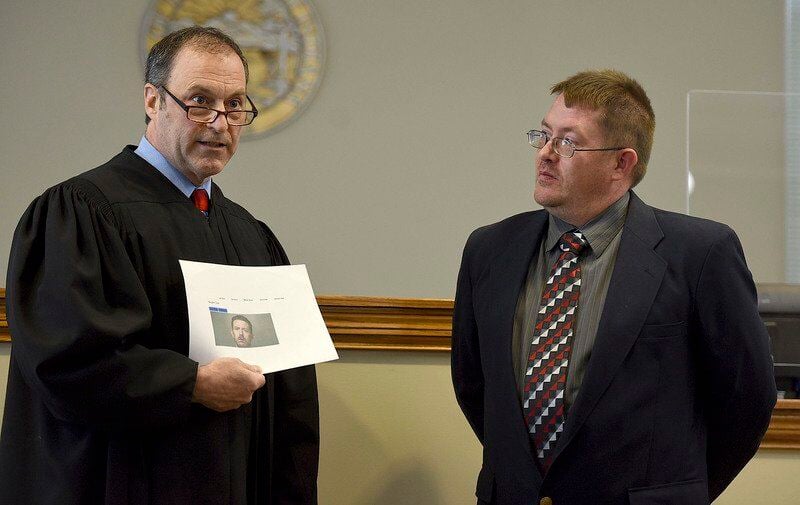 Tribune-Star/Joseph C. GarzaLow point, high point: Judge John Roach displays a photo of Vaughn Cox during his drug-use days at a ceremony to celebrate Cox’s graduation from the Vigo County Veterans Treatment Court on Friday in the Vigo County Courthouse. He and his wife later ripped the photo to pieces. 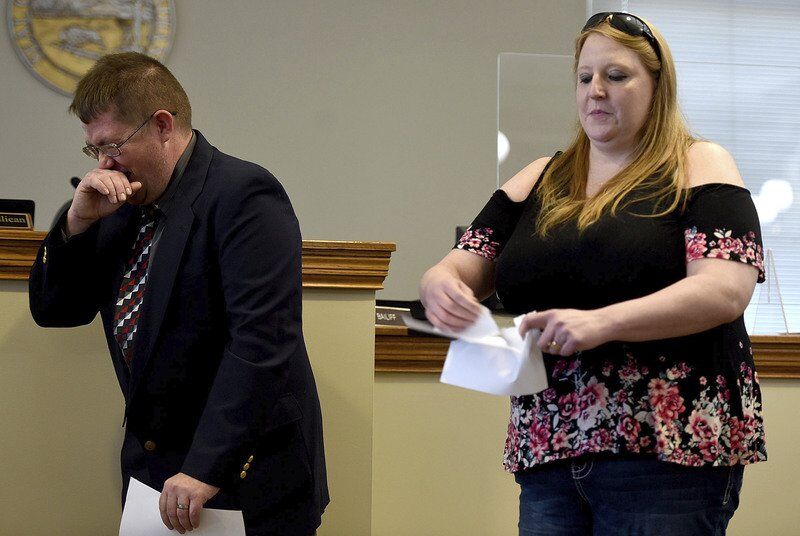 Tribune-Star/Joseph C. Garza Those days are over: Vaughn Cox laughs as his wife, Solitaire Cox, rips up an old booking photo of Vaughn during the ceremony to celebrate his graduation from the Vigo County Veterans Treatment Court on Friday at the Vigo County Courthouse. 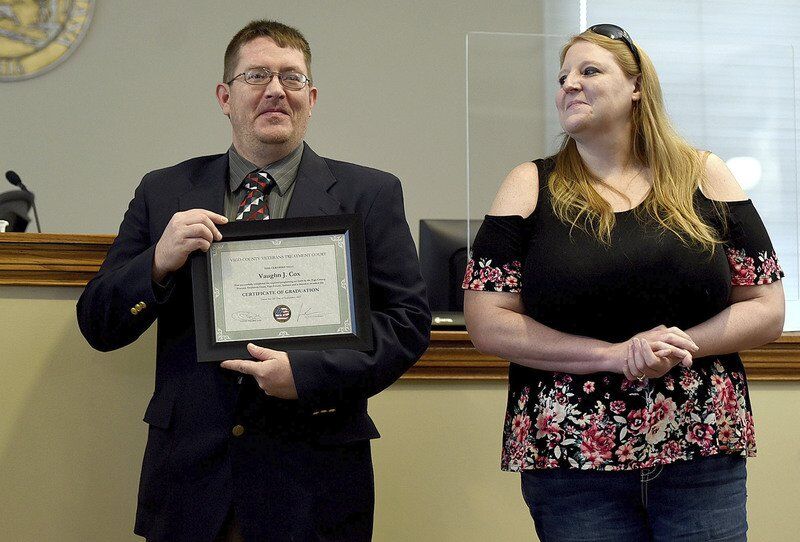 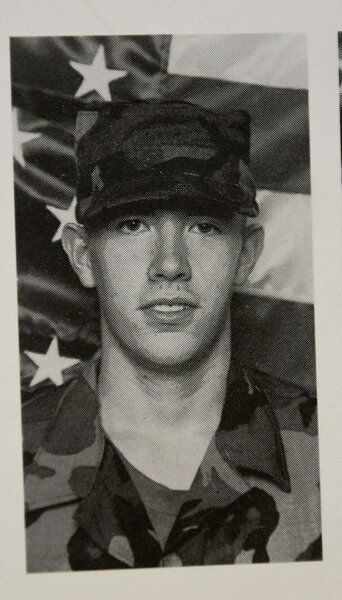 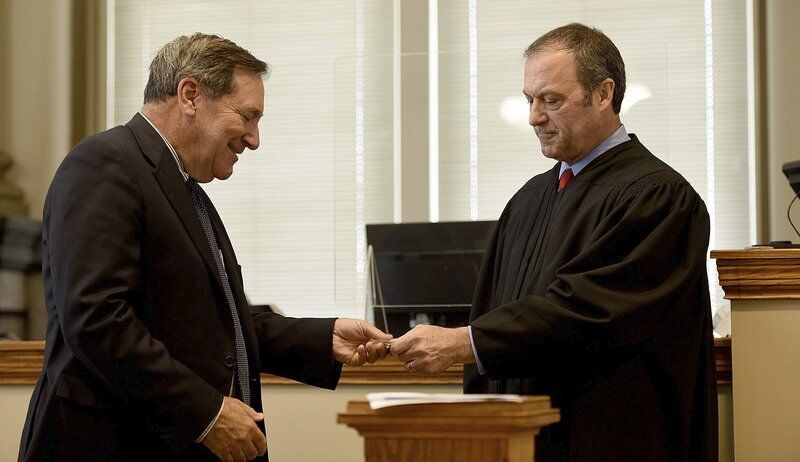 Tribune-Star/Joseph C. GarzaLow point, high point: Judge John Roach displays a photo of Vaughn Cox during his drug-use days at a ceremony to celebrate Cox’s graduation from the Vigo County Veterans Treatment Court on Friday in the Vigo County Courthouse. He and his wife later ripped the photo to pieces.

Tribune-Star/Joseph C. Garza Those days are over: Vaughn Cox laughs as his wife, Solitaire Cox, rips up an old booking photo of Vaughn during the ceremony to celebrate his graduation from the Vigo County Veterans Treatment Court on Friday at the Vigo County Courthouse.

Vaughn Cox became the 40th graduate of the program, prompting a celebration that inspired the 13 other veterans in the program trying to make positive life changes.

It wasn’t an easy process, Cox said, but it was worth the effort to get his marriage back on track, save his house and become financially solid.

“What Judge Roach says is true,” he said. “If you do the program and use the tools they give you, you will succeed.”

Judge John Roach handed Cox a jail booking photo from his arrest in 2019, saying the man in the photo no longer exists. The courtroom erupted in cheers as Cox tore the photo into small pieces that he tossed into the air. His wife Solitare also tore up a jail photo of Cox, saying that was no longer her husband.

A court order to dismiss Cox’s domestic violence charges – his entry into the court system – was filed with his completion of the court deferral program.

Cox credited the court staff, his wife and family, and others with helping him change.

Cox said he entered the Army in 2000 and became a heavy wheel vehicle mechanic working on vehicles weighing more than five tons. Four days before he was scheduled to deploy, he was injured when a 7,000-pound welding trailer fell on his leg.

He was in a leg immobilizer for about a year, and he had to learn to walk again. That injury started his use of pain medication.

“I literally had a bucket of pills. It was ridiculous,” Cox said. “It was not a fun roller coaster. I feel a lot better not being on painkillers. Being drug free entirely, it is a whole new me.”

His wife Solitaire supported him by making her own changes. She stopped drinking alcohol, and that helped Cox also stop drinking, which had become his stumbling point during the program.

“For the first year I was having trouble, not with drugs, but still drinking,” he said.

Cox had gone through a treatment program at the VA hospital but it wasn’t successful. He then went through MRT, or Moral Recognition Therapy, and that changed his outlook.

“I haven’t drank in over a year. I’ve been doing nothing but making forward progress,” he said.

Once a cook at Denny’s restaurant, he has advanced to shift manager and is poised to become assistant manager.

Cox said he recommends the veterans court program to those who qualify for it.

Program coordinator James Ramer said Cox was on the brink of losing his opportunity with the program more than once, but he made a remarkable turnaround.

“I say this all the time with graduates and I mean it every single time, but with Vaughn, I almost have no words,” Ramer said. “He embodies what we as a veterans treatment court are meant to be. He embodies the veteran we are meant to serve. I couldn’t think of anybody else I could say that I’m prouder of than Mr. Cox today.”

Being a veteran helped Cox succeed in the program, Ramer said.

“There’s a determination inside a lot of veterans that most other people don’t understand. I think that’s part of the reason a lot of our graduates are so successful. They get away from the military and they forget that,” Ramer said, “but then something awakens their self-motivation and determination. It’s like riding a bicycle.”

The program has had 60 participants, with 13 still in the process. Some have not successfully completed it.

Ramer said 80 percent of the graduates have not committed another criminal offense, and that is a tribute to their fortitude.

In its five years of operation, the court has administered 4,643 drug screens, with only 5.1 percent of those returning positive for alcohol or illicit substances.

Veterans are also required to complete 10 hours of “giveback” per month by donating service to an organization of their choosing. That part of the program pays dividends to the community and encourages pro-social contacts for the participants.

While the program is presided over by Judge Roach, it is a collaboration among the court, the VA, the public defenders’ office, the prosecutor’s office, probation department, community corrections, law enforcement Hamilton Center, Work One, Mental Health American and other community partners.

Also celebrating the 40th graduation at the Vigo County Courthouse was former U.S. Sen. Joe Donnelly, who has supported veterans programs with legislation and funding.

“It’s a program that we have always thought we owe to you because when our nation asked you, you stepped up,” Donnelly said to the veterans at the ceremony. “You didn’t have to answer the call, but you did. And you served our country and put your life on the line for all of us, so we could raise our families in peace.”