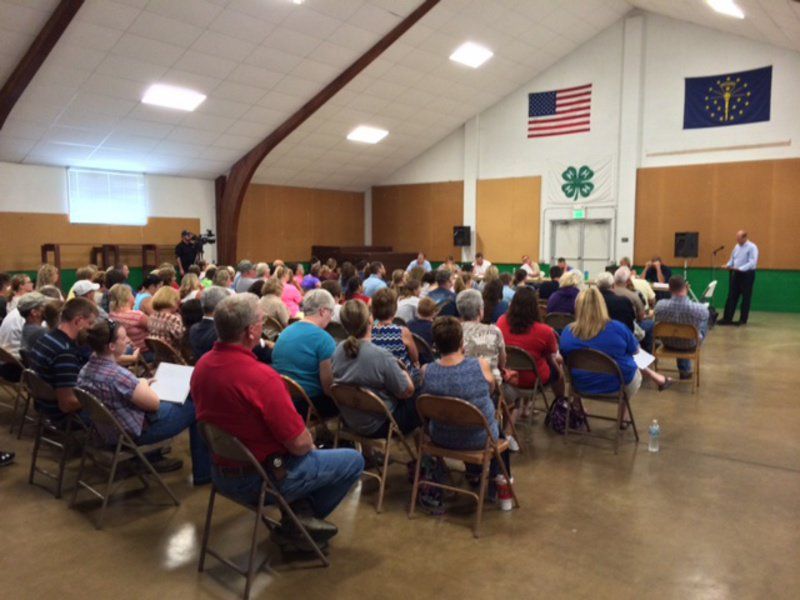 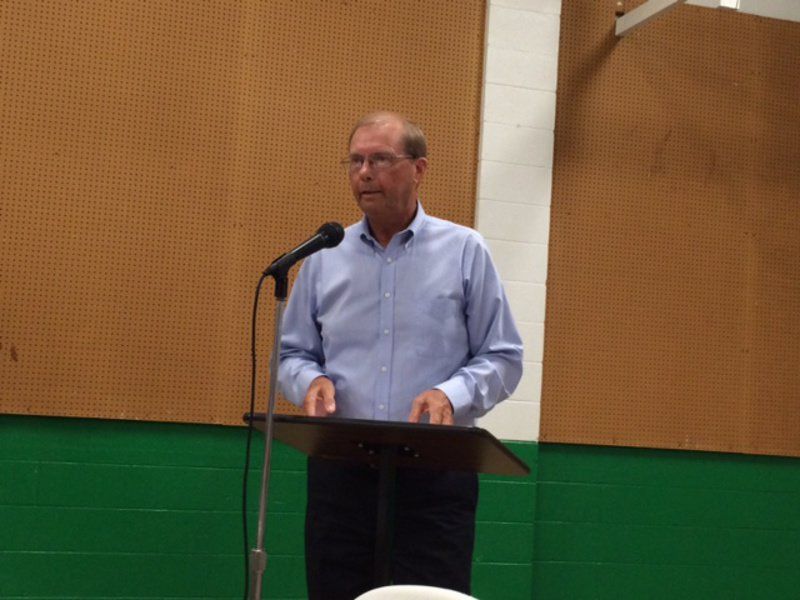 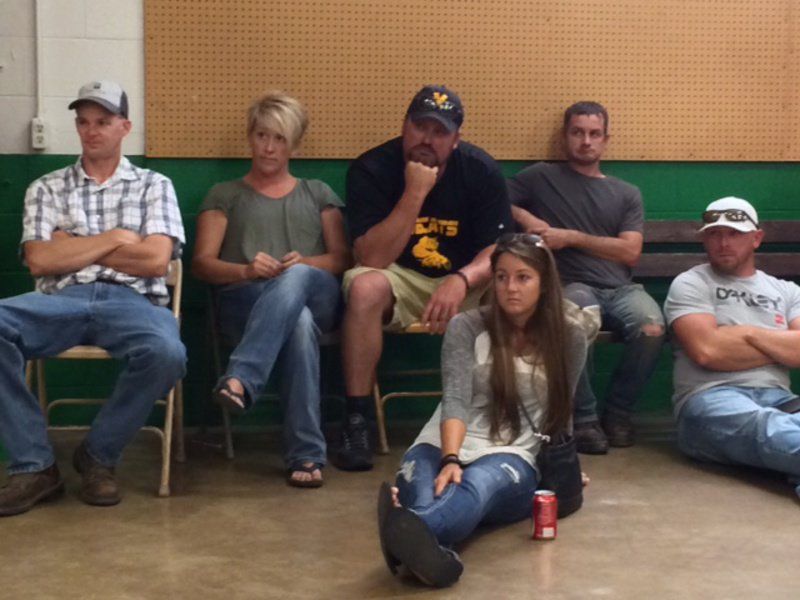 Consolidation of Rockville and Turkey Run high schools is among the options that will be considered by the North Central Parke Community School Corp. board as it looks to the future.

The board conducted a 2 1/2 hour special session meeting Wednesday night at the Parke County Fairgrounds building to talk about future academic programming and facility use. Superintendent Tom Rohr made a presentation and outlined nine possible options to reconfigure grades and buildings.

No decisions were made, but a committee will be formed to study the options and make recommendations to the board.

Similar to many rural districts around the state, North Central Parke has been facing declining enrollments and revenues in recent years and “we need to do something,” Rohr said in a previous interview.

A large group attended the meeting, including parents, students and North Central Parke teachers and staff. Those attending had an opportunity to ask questions and make comments, and more than 20 people did so.

Wednesday’s meeting was a first major step in looking to the future of the district, officials said.

“One of the most difficult decisions any school board member must make is whether to close a school, change boundary lines or consolidate schools,” Rohr stated. The decision can “have an emotional impact on the communities involved, perhaps for several years.”

As a result, the educational and financial benefits might get discarded in the emotional turmoil, he said.

He suggested the guiding force behind the process must be “what is best for the children in this community.” The small enrollments at the high schools limit class offerings as well as extracurricular activities, he said.

Among the other options Rohr outlined:

• Make no changes in the current grade levels or schools. “The district can manage financially for another few years by continuing to reduce costs, reduce staffing and suppressing compensation to staff members,” he said.

• Leave the elementary schools as they are and build one new junior/senior high school between Rockville and Turkey Run. “This would be the most costly and probably less feasible option for consideration. The current facilities are in too good of condition to walk away from, still have outstanding debt, and under-utilized. The cost of maintaining another facility would be more than any benefit gained from consolidating schools,” he said.

At the outset of the special session, board president Scott Ramsay reassured those attending that the meeting was “to start the conversation” that ultimately will lead to decisions that better serve students.

Whatever the final decision, it will not be implemented in 2015-16 or 2016-17 school years, Ramsay emphasized. “For the next two years, we will operate as we do now.” He didn’t want school teachers and staff worrying about their jobs he said.

Rohr suggested a timeline in which the board makes a final decision in July 2016, but some of the board members, including Rusty Akers, believe a decision needs to come sooner so people, including staff, know what the future holds. Still, implementation would not occur before the 2017-18 school year.

Board member Kim Cooper believes it’s important to have public input to help the board make the right decisions for children. The school board will discuss formation of the committee at a future meeting; it’s anticipated representatives of the community will sit on that committee.

In Rohr’s suggested timeline, 2017-18 would be “the first year of the new North Central Parke single high school” — if the board decides on the consolidation — and its first graduation would be in May 2018.

Rohr said it will be important to provide adequate time for a smooth transition.

One person wanted to know why the name “Rockville High School” couldn’t be maintained if the two high schools are consolidated into that building. His comment generated a reaction from the crowd.

Ramsay pointed out it is a “sensitive subject” and maintaining the “Rockville” name wouldn’t be representative of the entire district or sensitive to the other school’s heritage.

One person had concerns about whether K-8 elementary schools was a good option. She also urged the board to reach out to teachers and listen to their concerns and suggestions.

Mike Simpson, who has two children attending Turkey Run schools, expressed a sentiment that appeared to be shared by many. “We’re all just ready for it to happen,” he said after the meeting. “All the kids get along and play sports together. We see them at 4-H.” Parents from Rockville and Turkey Run know eachother and have talked.

He sees it as inevitable, given declining enrollments and revenue. He hopes consolidation of the high schools, should it occur, doesn’t cause parents to pull their children out of North Central Parke schools. His wife teaches at Turkey Run.

During the meeting, Simpson asked the board to use common sense and to keep the community informed as things progress.

Also attending the meeting was Kris Wittenmyer, whose children attend Rockville schools; she also is the dance coach at Turkey Run. She believes high school consolidation “has to” occur. “There’s no way around it,” she said. “I think the main thing on everyone’s mind is when” and what to expect.

Many probably realize it’s inevitable, “but there are still a lot of parents who have children in the school system that they (parents) attended,” and they may make “one last ditch effort” to save their schools. “Nobody wants to give up their facilities,” Wittenmyer said.

She believes consolidation will give students more opportunities. Her daughter has wanted to take certain classes, but they weren’t offered either because there weren’t enough students enrolled or the schools didn’t have the staff.

Possible options for North Central Parke Community schools as the district looks at future academic programming and use of facilities:

Rockville and Turkey Run high schools do not have sufficient enrollment to allow for a comprehensive academic and extra-curricular program for students, says Tom Rohr, superintendent of North Central Parke Community schools. On Wednesday night, he presented several options to help address that issue.

Option 1: Make no changes in the current grade levels or schools.

This would be the easiest short term option for the Board. The district can manage financially for another few years by continuing to reduce costs, reduce staffing, and suppressing compensation to staff members.

Option 2: Leave the elementary schools as they are and build one new junior/senior high school between Rockville and Turkey Run.

This would be the most costly and probably less feasible option for consideration. The current facilities are in too good of condition to walk away from, still have outstanding debt, and under-utilized. The cost of maintaining another facility would be more than any benefit gained from consolidating schools.

This was the option listed in the Boyd study. It is based strictly on enrollment numbers and facility utilization. The current elementary schools would be utilized close to capacity (and perhaps over capacity at Rockville) and the Rockville High School facility could accommodate 9-12 with few problems. There would be greater utilization of staff (after some reductions), more students available per section, increased opportunities for ECA activities, and more up-to-date athletic facilities on the campus. There would be an immediate estimated saving of $80,000 to $100,000 in ECA stipends. This option also “displaces” the least number of students. The Rox and Warrior tradition can continue at the K-8 facility, but a new name and logo would be appropriate for the new high school program.

This option also has limitations that must be considered. The Rockville High School building site is confined on all sides limiting expansion opportunities. Event parking would be a problem as it is currently arranged. School colors, logos, mascots, trophy cases, honor walls, etc. would all have to taken into consideration. Another major limitation is that the school site does not have a high school gym that is adequate for many school functions and practices. The idea of the “new school” playing games in the elementary school Rockadome would be met with displeasure.

This option would also eliminate the use of many classrooms in the current Turkey Run High School building. This space would need to be re-purposed or closed down.

This option has many of the points of consideration as Option 3. The major difference is that the 9-12 high school would be on the Turkey Run campus instead of in Rockville. One major advantage is that there is adequate space for expansion since the site is not confined. Of course, if the elementary schools are k-8 buildings, there would be no need for the Rockville High School building which would be a waste of an excellent building.

Other factors to consider in making the TR campus the high school location include:

• The outside facilities, including football field, baseball and softball fields, would need to be brought up to standards compared to the RV facility.

• There is no track on the TR campus.

• According to the Performance Services study, there is a need for a minimum of $4 million in renovation of HVAC systems, domestic water lines, etc. needed at the building.

• There are fewer opportunities for students and parents to eat between activities in the TR area.

• A greater number of students will be displaced by moving Rockville students to Turkey Run.

• The Turkey Run campus is not on city water or city sewer. Increasing the capacity may require this to be discussed.

• The high school would be further removed from emergency services than if they were in Rockville.