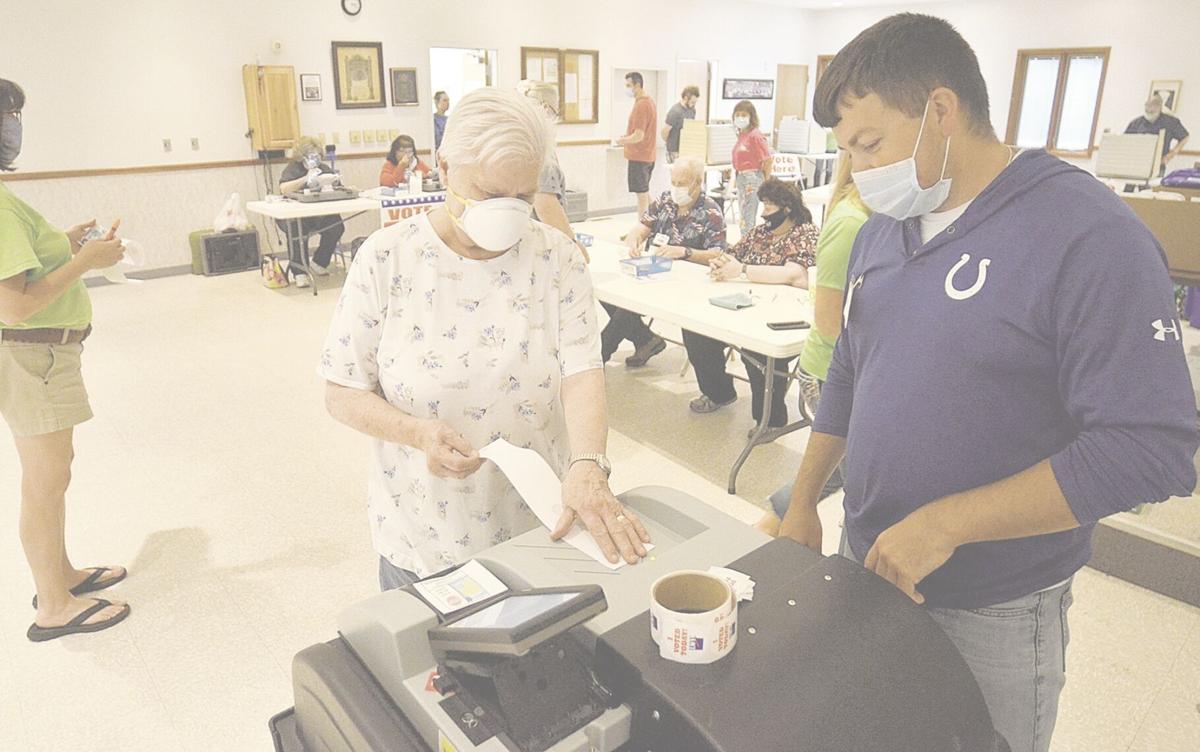 Tribune-Star/Joseph C. Garza One more voice heard: Voter Theresa Williams slides her ballot into the ballot box as exit clerk J.T. Jeffries looks on at the IBEW 725 headquarters on Tuesday. 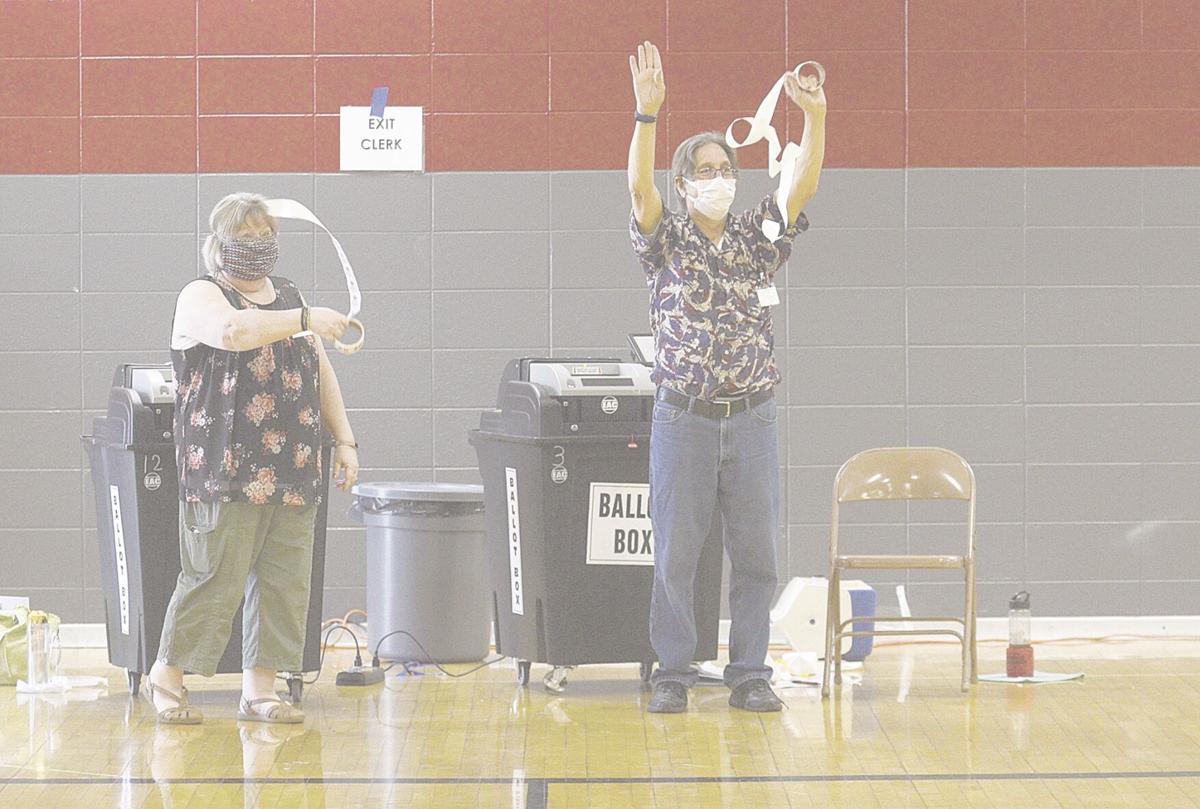 Tribune-Star/Joseph C. Garza We're open: Exit clerks Mary Ella Young and Patrick Voll let a voter know where they and the ballot boxes are in the auxilliary gym at Terre Haute South during voting on Tuesday. 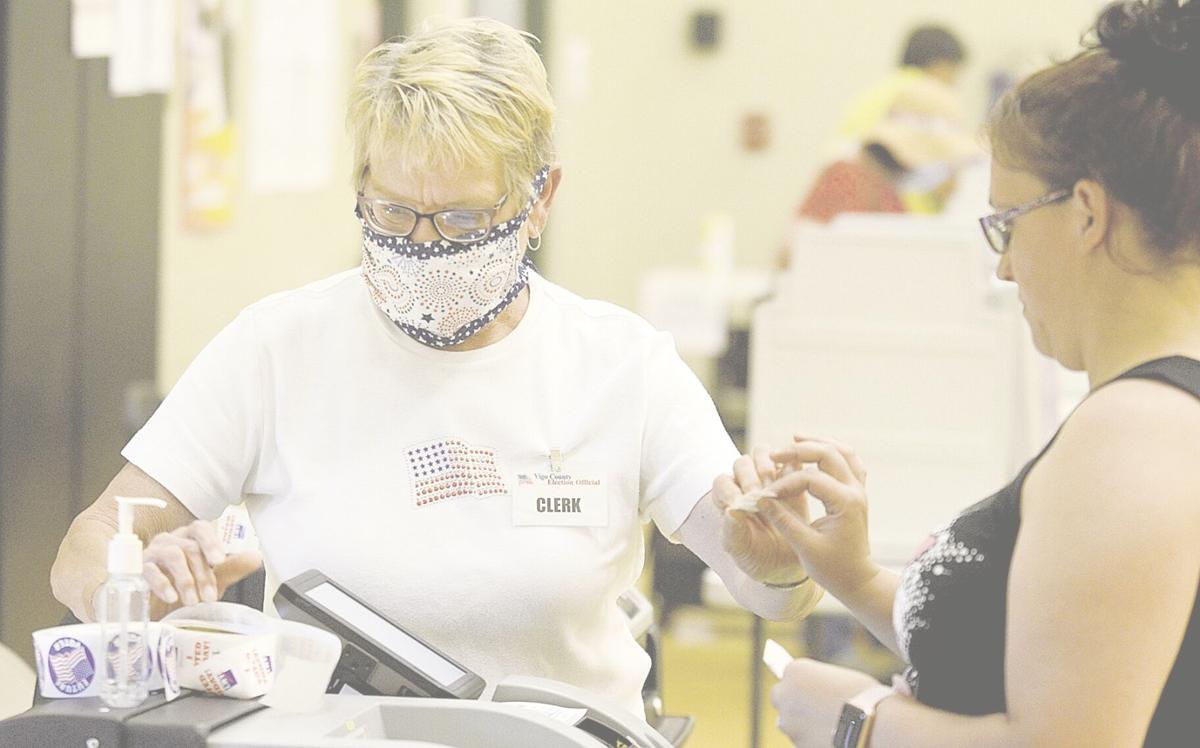 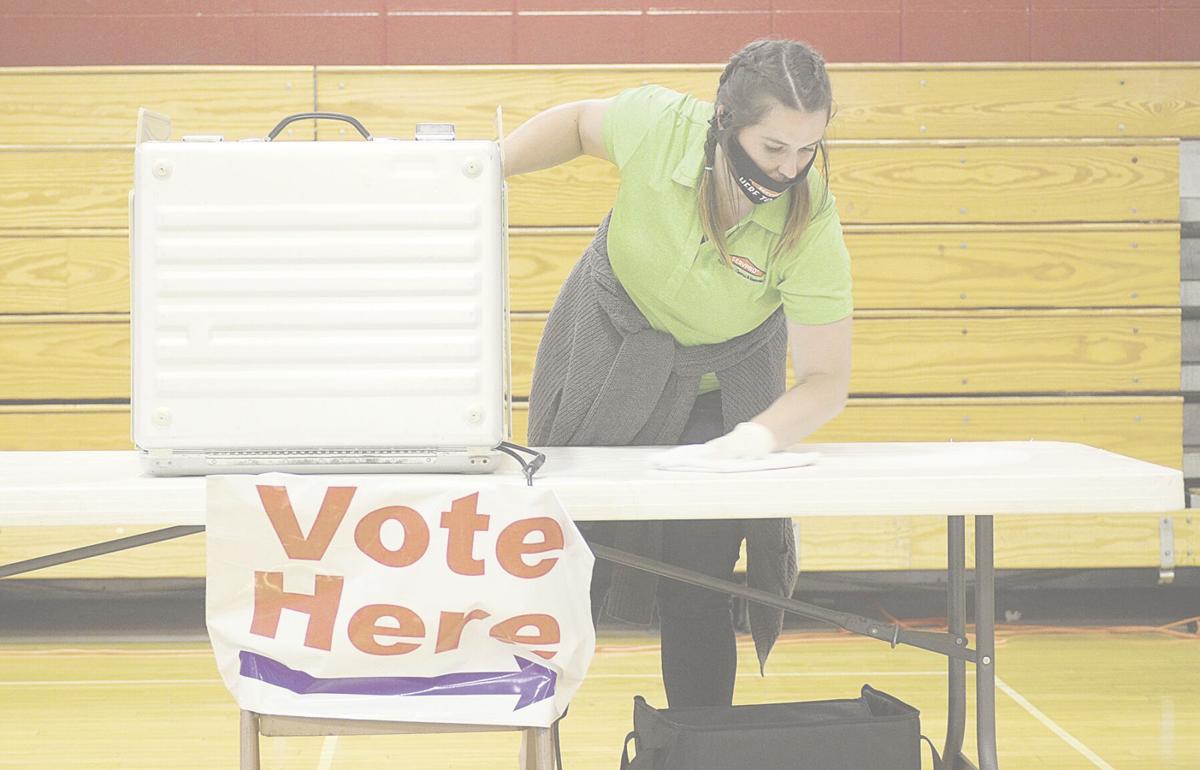 Tribune-Star/Joseph C. Garza A clean vote: Volunteer Mackenzie McKee wipes down one of the voting machine tables in the Terre Haute South auxilliary gym on Tuesday. 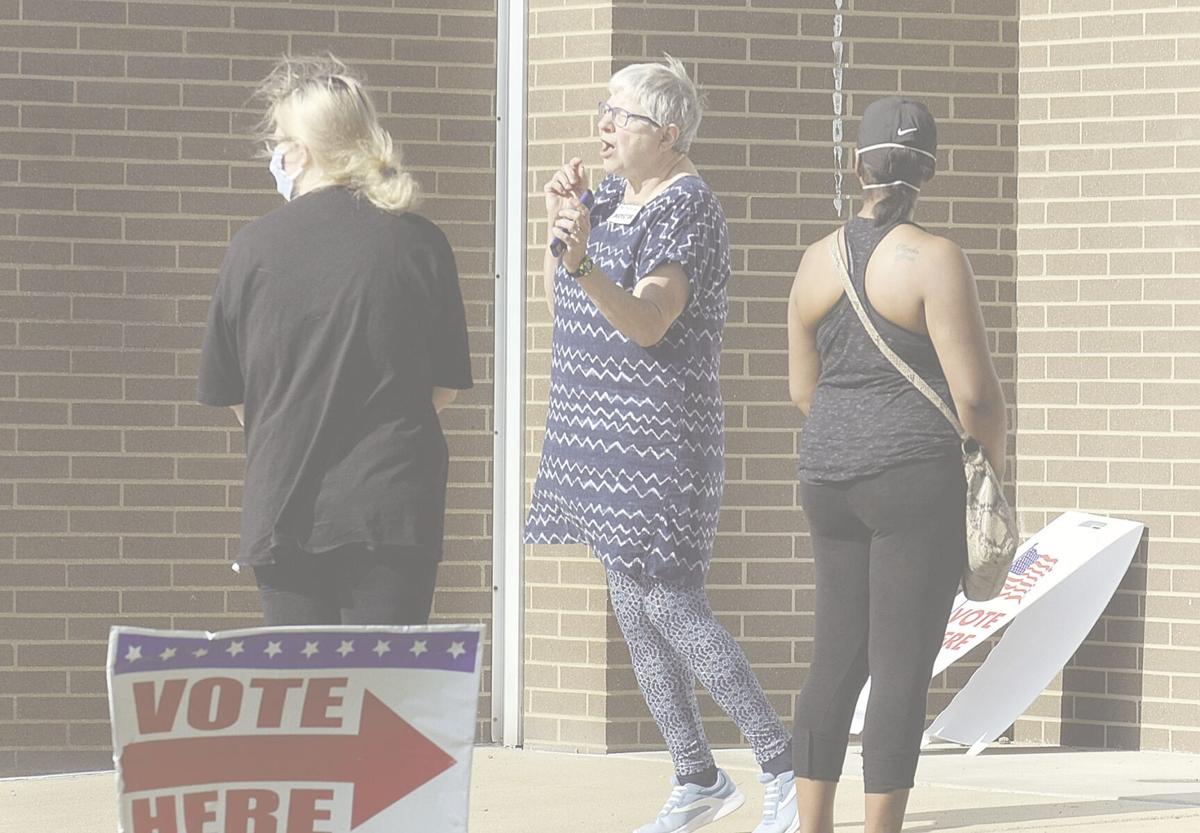 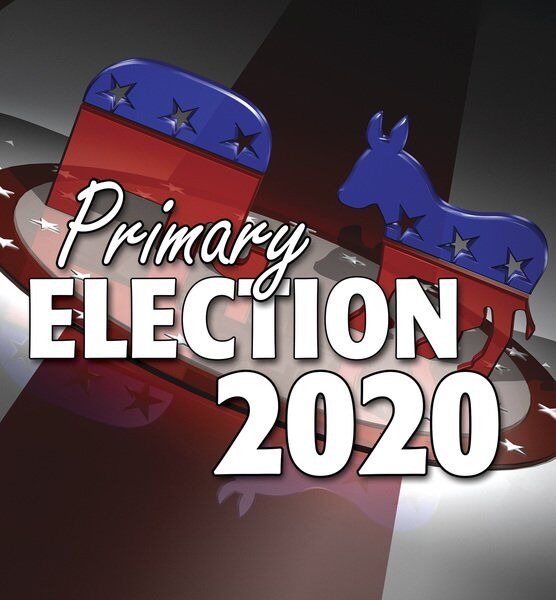 Tribune-Star/Joseph C. Garza One more voice heard: Voter Theresa Williams slides her ballot into the ballot box as exit clerk J.T. Jeffries looks on at the IBEW 725 headquarters on Tuesday.

Tribune-Star/Joseph C. Garza We're open: Exit clerks Mary Ella Young and Patrick Voll let a voter know where they and the ballot boxes are in the auxilliary gym at Terre Haute South during voting on Tuesday.

All results are unofficial until certified by the Vigo County Election Board, which must be certified by 3 p.m. June 12, under a March order of the Indiana Election Commission.

The Tribune-Star was not successful in its attempts Tuesday night to reach Vigo County Clerk Brad Newman for comment by way of his cell phone and by telephone at the vote center at the Vigo County Courthouse.

Mail-in voting played a large role in this year's primary. With Indiana this year making vote-by-mail open to all registered voters for the primary election, hundreds of thousands of Hoosiers chose to go that route.

In Vigo County, 8,336 Vigo County residents requested absentee ballots to vote via mail, according to the county clerk's office.

COVID-19 or no COVID-19, many voters were eager to get out and vote Tuesday, and there were very few reports of problems at Vigo County's eight vote centers.

Voter Dennis Shouse said he took a break from work to cast his ballot at the courthouse annex off Oak Street.

Like many voters, Shouse said he appreciated the sanitizing wipe downs of voting machines and door handles by ServPro staff.

At South Vigo High School, about 800 ballots had been cast by 4 p.m.

Twenty-four vote machines were spread around the school gymnasium. While the site had been busy most of the day, at no time were all of the machines being used at once, said a ServPro staffer.

At the courthouse annex, only nine machines were available due to the smaller room and social distancing requirements. A line of voters did stretch outside the building in the shade of the north canopy about mid-afternoon.

Vigo County Chief Deputy Clerk Leanna Moore said the clerk's office received many compliments during the day from people pleased with how easy it was to vote and that sanitizing was ongoing at each vote center.

In the fall, Moore said, the plan is to return to 17 or 18 vote centers because schools should be back in session. “It's too much of a danger to the students,” she said of potential exposure to COVID-19 from the public.

Moore said she was unaware of any problems reported with voting machines.

Garry Seidner of Terre Haute said he only had to wait a minute as he was checked in at the IBEW Union hall on Hulman Street, and he appreciated the speed and ease of voting as compared to voting sites he's visited in previous elections.

The current political climate in the nation is concerning, Seidner said, and the social unrest and violent protests across the nation are upsetting.

“I'm just totally disappointed in America. Voting is a right and a lot of people don't take advantage of it,” he said. “I don't hate any race, and I just get so tired of both sides arguing. Still, I'm going to vote because it's the only thing I can do.”

At North Vigo High School, inspector Lola Roberts said the polling site had been busy since opening, but no long lines had formed.  “We may have two or three at a time waiting, but that's all,” Roberts said.

Poll workers said the site had been busier today than in past elections. Ninety voters had cast ballots at that location as of about 10 a.m.

Steady streams of Vigo County voters emphasized the importance of not sitting out the  primary.

"There's lots of things going on in the world today, and we just want things to be right," said Larry Dull after casting his ballot in the vote center at Haute City Center, formerly the Honey Creek Mall.

The 50-year-old Dull and his wife, Marsha, 50, were among 282 people who'd voted by approximately 1 p.m. at the shopping center, according to poll workers at the site. The Dulls both chose a Republican ballot. That total more than doubled the peak day of early voting last week, when 120 people voted at the mall site, poll workers said.

Voters had access to 24 machines there, with nearly 15 poll workers to assist them.

At the Vigo County Annex, Twenty-seven-year-old Carrie Moffett stood at the back of the line around 2 p.m.

Moffett said she wasn't sure her vote would make a difference in the races for party nominees in county, state and federal offices, but didn't want to take the chance of not voting.

"Especially since I want things to get better, and they're not going to unless something changes," she said. She chose a Democratic ballot.