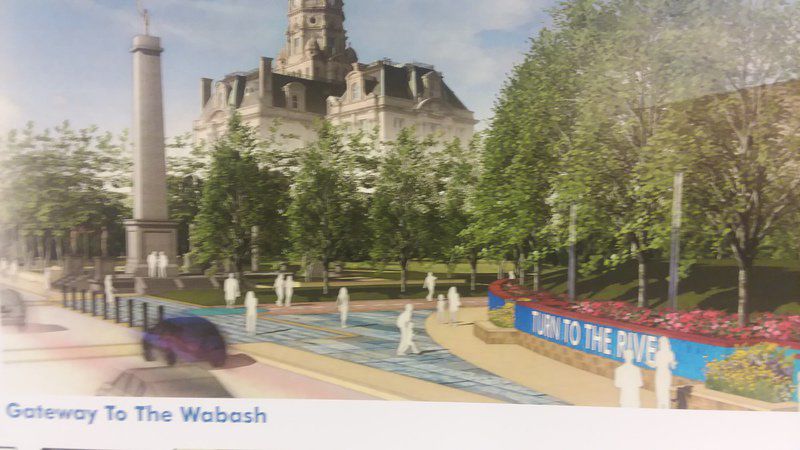 Submitted photoGateway: This vision of a new walkway along the Third Street side of the Vigo County Courthouse was among several designs unveiled for Terre Haute's Turn to the River initiative. 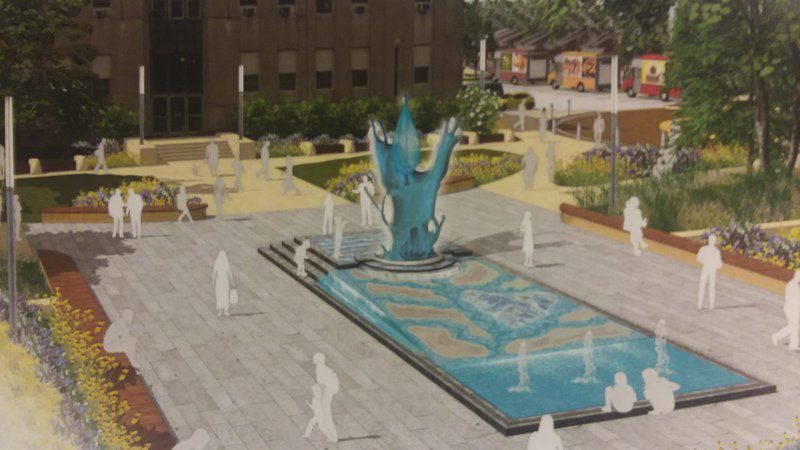 Submitted photoGovernment plaza: This design for a renovated plaza between Terre Haute City Hall and the Vigo County Courthouse is among several concepts unveiled Tuesday for the Turn to the River initiative.

Submitted photoGateway: This vision of a new walkway along the Third Street side of the Vigo County Courthouse was among several designs unveiled for Terre Haute's Turn to the River initiative.

Submitted photoGovernment plaza: This design for a renovated plaza between Terre Haute City Hall and the Vigo County Courthouse is among several concepts unveiled Tuesday for the Turn to the River initiative.

Six years after planning and design began, Mary Kramer said Tuesday she has her hard hat ready for construction to start next year on Turn to the River.

The executive director of Wabash Valley Art Spaces made the comment as revised concepts and draft designs were presented for the project and $1.5 million in state funding was announced for quality-of-place initiatives in Vigo, Sullivan and Knox counties.

Turn to the River is a multi-phase effort to connect downtown Terre Haute to the Wabash River through public art, green space and walkway improvements. Its focus is the four-block city-county government and One Wabash, city-owned riverside property.

“It’s great to have been able to keep it moving forward through all its phases and through community input that has dictated what [residents] want to see at the river [and] how they want to experience their government campus,” she said.

Representatives of the Indianapolis design group Taylor Siefker Williams produced a series of designs aimed at “elevating and strengthening a community of character, or a community’s identity,” said Scott Siefker , partner and principal with the group.

Economic development is also part of the initiative, Siefker said.

“If you’re investing a significant amount of money in any kind of public area you want to make sure you can leverage those dollars,” he said. He suggested making the area more attractive would encourage those heading to a riverfront park to also stop for lunch at a local restaurant.

Designs include a walkway to highlight the history and architecture of the 19th century Vigo County Courthouse, development of a plaza between the courthouse and City Hall and ensuring sites are appropriate for multiple uses.

“It’s our challenge to … knit the character of all of those pieces together,” Siefker said.

The design phase of Turn to the River is expected to be complete by January, Kramer said.

The $1.5 million in funding is part of Gov. Eric Holcomb’s Next Level Agenda to continue the regional economic development momentum created by the state’s Regional Cities Initiative.

“To build on Indiana’s economic success, we’re committed to helping our communities create long-term plans focused on quality of place and talent attraction,” Holcomb said in a news release. “We’re excited to see the tremendous regional collaboration occurring throughout the state.”

“Riverfronts are an attractive destination for families and our goal is to continue working with communities along the historic Wabash to utilize the riverfront to benefit the development of downtown areas, enhance the ability to attract businesses and create a more desirable convention and visitor environment,” Rath added.

Another $1.5 million was also awarded to a six-county region in east-central Indiana.

While details of the west-central allotment have not yet been worked out, Kramer said, “It’s wonderful that the state has awarded that money to our region. We’re grateful to the governor and the Indiana Economic Development Authority.”

The designs unveiled Tuesday will be posted in the coming days at wabashvalleyartspaces.com.

Dave Taylor can be reached at 812-231-4299 or dave.taylor@tribstar.com. Follow him on Twitte @TribStarDave.