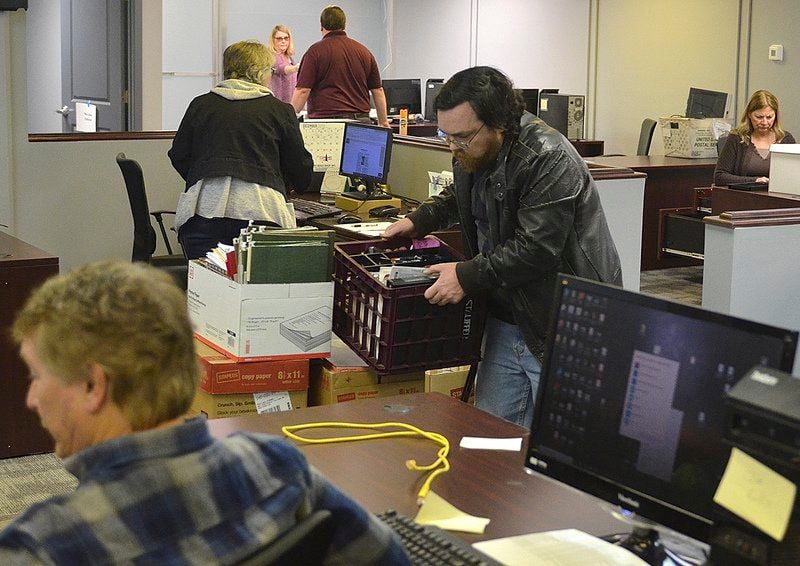 Tribune-Star/Joseph C. Garza Unpack in the new place: Tribune-Star newsroom employee Adam Gentry, center, unpacks his belongings in the new offices of the Tribune-Star on Thursday at The Meadows Shopping Center. 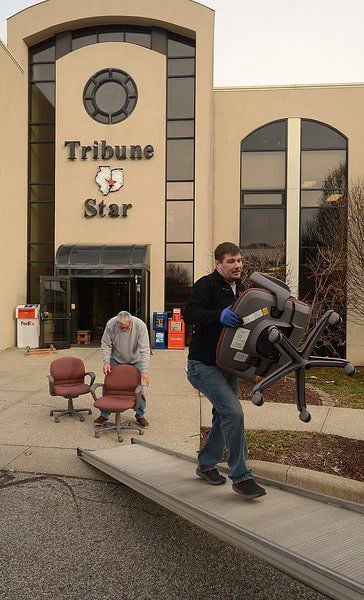 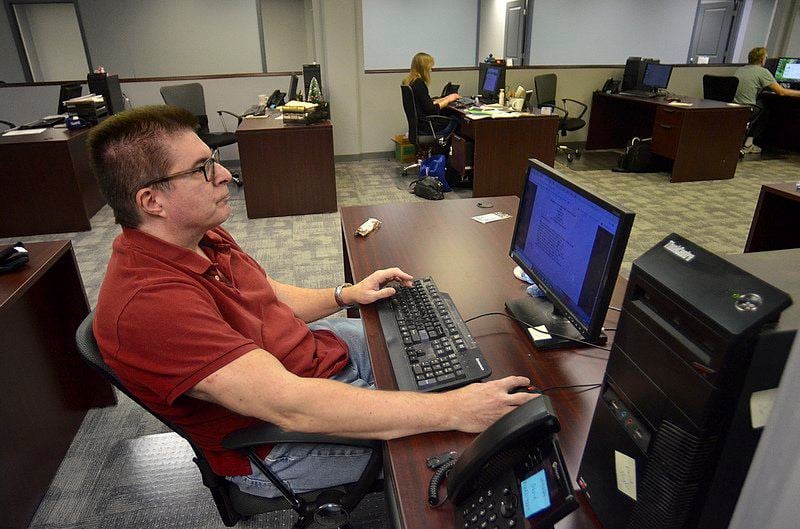 Tribune-Star/Joseph C. GarzaTribstar David’s new home: Tribune-Star sports reporter David Hughes works at his desk in the new offices of the newspaper on Thursday in The Meadows Shopping Center.

Framed editions of the Tribune-Star hung from the wall and sat atop cabinets as Tribune-Star Editor Max Jones finished clearing his office Thursday.

After roughly 22 years at 222 S. Seventh in Terre Haute, the newspaper moved to new quarters in the lower level of The Meadows Shopping Center at 2800 Poplar St.

Jones put a baseball cap with the Apple logo into a box. “Friends don’t let friends do DOS,” reads the cap’s inscription.

“I got that from Paul Hightower,” Jones said, referring to the late professor of photojournalism at Indiana State University.

“He was a computer geek and he taught me desktop publishing back in the late 1990s,” Jones said. “I was an Apple guy and he was, too, so he gave me that hat.”

Among the framed editions was a front page from 2002, when Terre Haute South Vigo High School’s girls basketball team won the state championship.

“It is the only basketball state championship South has won. Melanie Boeglin was on that team,” Jones said of the player who went onto start for Indiana State. The university in 2018 retired the number 22 worn by Boeglin, making her the first Sycamore woman to have her jersey hang from the rafters of Hulman Center.

Other framed editions included a “State of Secrecy” story from the late 1990s.

“It was a project that brought on a change in state law” on public records and public meetings, Jones said. “Seven papers got together to do that project, and we were one of them.”

Jones cleaned out two drawers filled with files from the 1990s brought over from when the newspaper moved from Wabash Avenue to South Seventh Street.

The newspaper’s old offices on Seventh Street and new ones at The Meadows were both abuzz during the move.

And a fast move it was. The newsroom on Thursday night sent its products from the Trib-Star’s new offices. (The printing plant remains on Margaret Avenue on Terre Haute’s east side.)

All of the newspaper’s departments including news/editorial, advertising and circulation are open to the public at The Meadows today, with the door just north of Stein Mart probably the best choice for customers.

Starting Monday, the Tribune-Star also will have a staffed kiosk on the first floor of the Meadows.

Phone numbers remain the same, but if direct dial to any given employees is difficult today, customers can call the toll-free number at 800-783-8742.

By Thursday afternoon, the new offices were hopping as the last of new desks were assembled and computers hooked up.

“It’s been a busy day, but I’m really excited to be here,” said publisher Robyn McCloskey. “This is a beautiful facility, and it’s a jumping location that will put us in even better touch with our customers.

“The local ownership [of The Meadows] has been tremendous,” she added. “They’ve really gone out of their way to help us.”