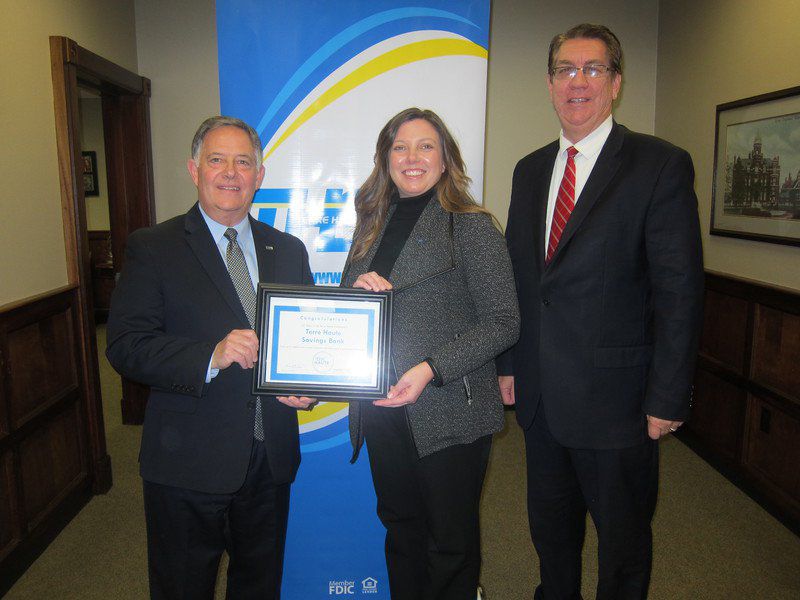 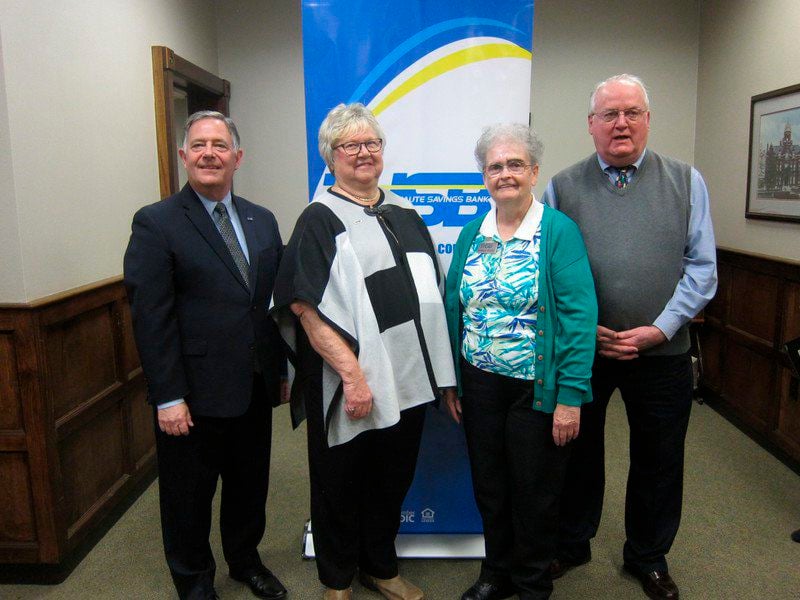 Tribune-Star/Lisa TriggLong time of service: THSB President Bart Colwell celebrates 150 years of banking with employees Sondra Cress and Barbara Bruner, who have both been with the bank for more than 50 years, and employee David Myers, who has 48 years of service.

Tribune-Star/Lisa TriggLong time of service: THSB President Bart Colwell celebrates 150 years of banking with employees Sondra Cress and Barbara Bruner, who have both been with the bank for more than 50 years, and employee David Myers, who has 48 years of service.

Few businesses can say they have succeeded for more than a century, but on Monday, Terre Haute Savings Bank received special recognition for 150 years of operation and involvement in the community.

Bank president Bart Colwell accepted state and federal commendations for the bank during a ceremony capping a week-long recognition of the bank’s success.

During a ceremony in the bank, Kristin Craig, president of the TH Chamber of Commerce, shared a proclamation read into the Congressional Record of the House of Representatives by U.S Rep. Larry Bucshon.

Mayor Duke Bennett said he appreciates the community involvement of the bank.

“So many of these people I see in community meetings, events and a variety events, and you are the epitome of a community bank and really serving the community in a very special way,” he said of the THSB staff.

Bennett recalled setting up his first bank account as a child attending Meadows School at THSB, and said he still has an account with the bank.

THSB was founded by six Terre Haute businessmen on Nov. 10, 1869. Since 1882, the bank has been located at the corner of Sixth and Ohio streets.

Since then five additional branches have opened in North Terre Haute, Brazil, at 25th and Poplar, inside Westminster Village and in West Terre Haute.

“This is the face of community service. All of our staff members and employees who care about each other, and they care deeply about our community,” Colwell said.

Colwell mentioned Sondra Cress and Barbara Bruner who were both present at the 100th celebration of the bank, and said several current employees were present for the 125th celebration.

The bank began celebrating the 150-year milestone last week with a “week of giving” as five area organizations each received a $1,000 donation from the bank.

“We were able to help five agencies that are going to be good stewards of donor dollars, and we helped them in their mission. That’s what we intended to do,” Colwell said.