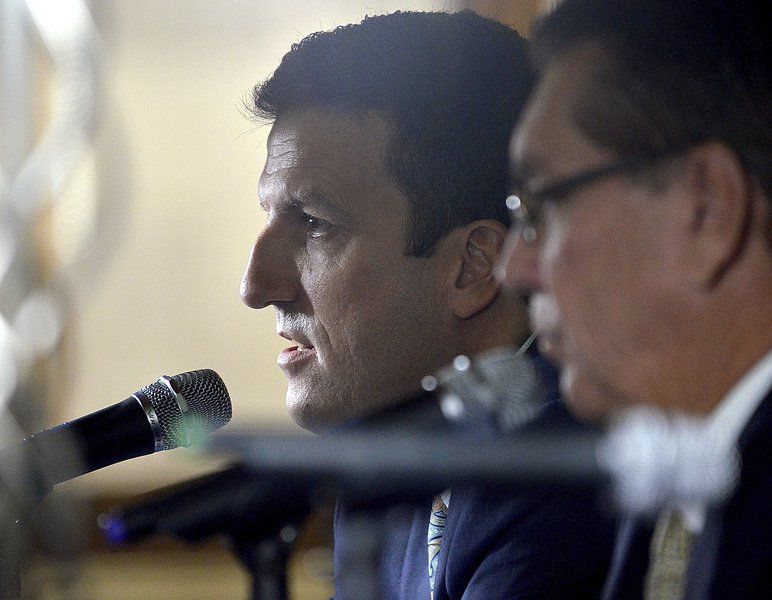 Tribune-Star/Joseph C. GarzaCity finances is the topic: Mayor Duke Bennett answers a question about city finances during a mayoral candidate forum on Tuesday in the Vigo County Public Library. 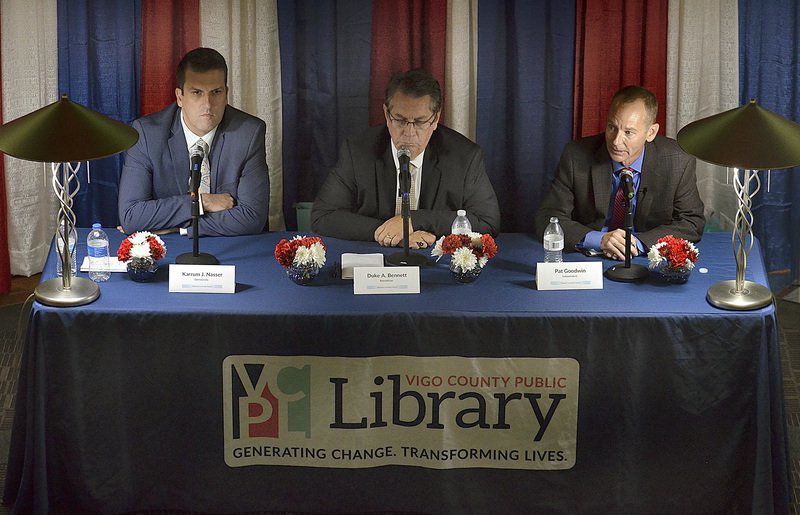 Tribune-Star/Joseph C. Garza On the contract with Republic: Democrat candidate Karrum Nasser and Mayor Duke Bennett listen as independent candidate Pat Goodwin responds to a question about trash pick up during a mayoral forum Oct. 1, 2019, in the Vigo County Public Library. 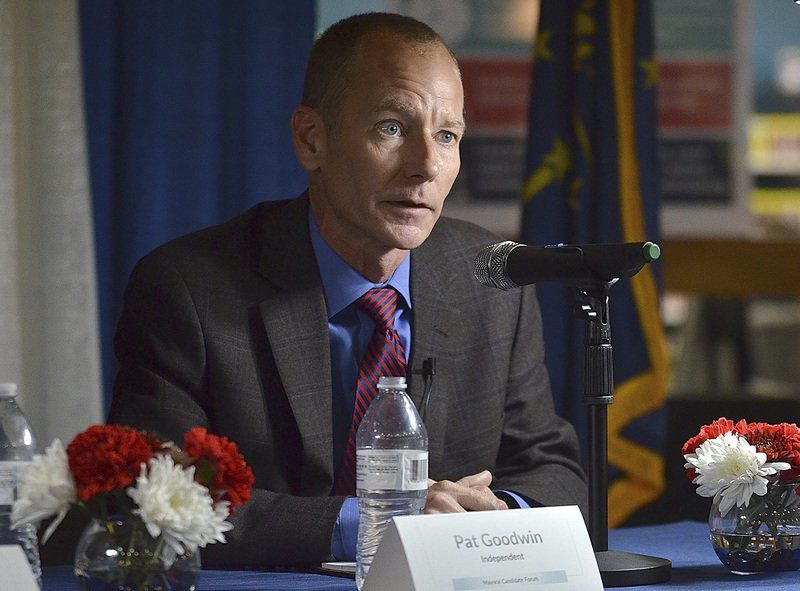 Tribune-Star/Joseph C. GarzaCity finances is the topic: Mayor Duke Bennett answers a question about city finances during a mayoral candidate forum on Tuesday in the Vigo County Public Library.

Tribune-Star/Joseph C. Garza On the contract with Republic: Democrat candidate Karrum Nasser and Mayor Duke Bennett listen as independent candidate Pat Goodwin responds to a question about trash pick up during a mayoral forum Oct. 1, 2019, in the Vigo County Public Library.

It was standing room only at the Vigo County Public Library on Tuesday as three candidates for Terre Haute mayor outlined their positions on a host of topics.

Sponsored by the League of Women Voters of Vigo County and co-sponsored by the Greater Terre Haute NAACP and Tribune-Star, the forum covered everything from public safety to city finances.

But as a baseline from which to start, the candidates were asked to define what they see as the role of mayor and the office’s most important function in city governance.

Republican candidate and incumbent mayor Duke Bennett said, as he has maintained across numerous forums in the past month, that a mayor’s number one priority is ensuring the safety of the city.

Doing so, he said, requires a steadfast commitment to both the training and overall funding of the city’s police and fire protection services.

“Public safety is number one. No matter what anybody says, that is the most important thing that we can deliver to keep people safe and respond when they have an urgent need,” Bennett said.

Independent candidate Pat Goodwin said the role of mayor is being the face of the city and ensuring that everything undertaken with taxpayer money is something that will benefit the city and its residents in the long run.

“The mayor is the face of our community, like it or not, and that goes on to the greater community beyond the boundary of the city of Terre Haute as a lot of people that live out in the county still have that Terre Haute address and Terre Haute identity,” Goodwin said.

Democrat candidate and City Council member Karrum Nasser said he views the mayor’s job as one of customer service and that he is open to borrowing successful strategies from neighboring communities and tapping into the talent graduating from local universities and colleges to help implement them.

“People need to trust their government. Often times we hear that something is too complicated or that it’s how we’ve always done it. I think the citizens deserve to have a better answer than that when it comes to some of the challenges in our community.

“And I think sometimes we suffer from not my idea syndrome, where if it’s not our idea then we won’t look into it and see if we can do it here. Oftentimes we spend so much time and energy explaining why something won’t work instead of using that same energy to make it work.”

Public safety was addressed multiple times throughout the forum, both in how Terre Haute’s compares to comparable cities and how it’s funding and operation is often used as campaign rhetoric.

Nasser said he’s tired of seeing and hearing police and fire budgets and staffing used as “boogeymen” during campaign season and promised that he wouldn’t downsize either department if elected mayor.

“Making public safety out to be the bad guy is frustrating,” Nasser said. “And I can’t imagine how people in those departments feel.

“ ... The fact that it’s always being talked about, downsizing public safety is very disheartening. I won’t do that as mayor. I’ll keep our staffing levels and probably add more to the police department.”

Bennett doubled down on his earlier statement about public safety being his priority, but didn’t shy away from the fact it’s the most expensive pair of budgets in the city.

“It’s the most expensive department you have, but that’s true in every community. Terre Haute is not unique in that,” Bennett said. “But it’s an investment in protecting our citizens. Our crime has dropped four out of the last five years and is the lowest it’s been in the last 20.”

Goodwin, as he said at a forum earlier this month, said public safety should be about more than just police and fire. As mayor, he said, he look to spending more on preventative measures.

He said vacant buildings pose a great risk to firefighters and neighbors, prompt snow removal could curb wintertime accidents and that sewer repair could prevent sinkholes from nearly swallowing a fire engine whole.

“Public safety is about keeping you all safe and there are a lot of ways we do that or fail to do that,” Goodwin said.

In a rebuttal to Goodwin’s past claim that vacant homes and buildings were a majority of the fires in the city, Nasser said he reached out to leaders in the Terre Haute Fire Department to find that just more than 16% of fires are attributed to vacant properties.

In a similar question, the candidates were asked if they supported cutting public safety positions to help balance the city’s budget and build much needed cash reserves.

Both Nasser and Bennett answered with a resounding no while Goodwin said he didn’t favor cutting positions, but would rather slim the fire positions through attrition.

“I’ve said [the fire department] needs to get smaller in the long term, but never through layoffs,” Goodwin said. “Through attrition and through the use of technology, we can do the job with fewer people in the future.

“I do believe that’s a long-term goal we should set, but never through layoffs or because we have a financial shortfall. With the police department, based on what I know, I believe it needs to get a little bit bigger. Especially that true with regard to people on the street patrolling, neighborhood policing.”

Charles F. Hackett, 85, of Brownsburg, Indiana, and formerly of Brazil, Indiana, passed away at Brownsburg Meadows Nursing Home, on January 27, 2020, following an extended illness. Chuck was born in Chicago, Illinois on April 13, 1934, the son of Martin and Evelyn (Smith) Hackett. He graduat…

LEWIS [mdash] Inez E. Carrico, 86, of Lewis passed away on Monday January 27, 2020 in her residence. She was born in Vigo County, IN on December 20, 1933 to James and Mammie (Sparks) Yates. Inez was a homemaker for her family. Inez attended Blackhawk High School. She attended and was a membe…