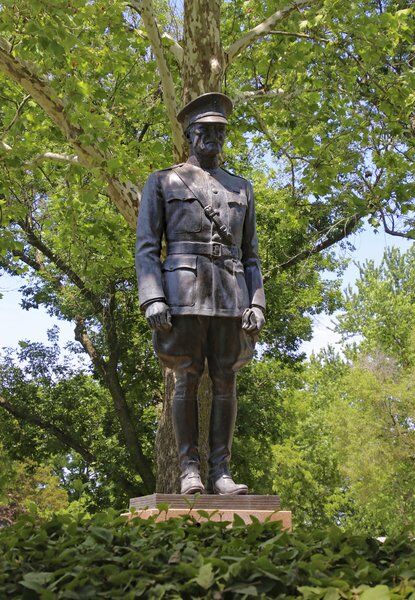 Special to the Tribune-Star/Mike LunsfordStatue: A bronze statue of General John J. Pershing stands just north of his boyhood home in Laclede, Missouri. 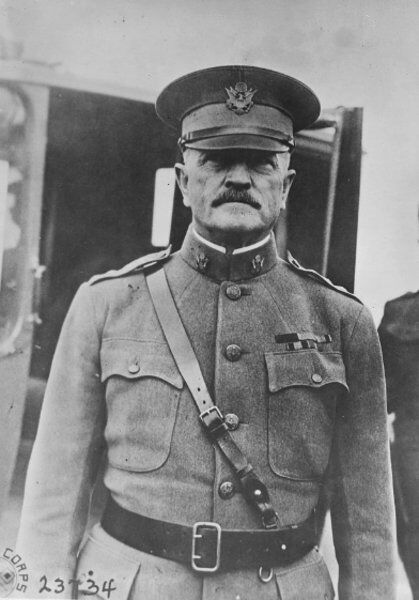 Courtesy of the Bain News Service Photograph Collection, Library of CongressLegend: General John J. Pershing is shown just after decorating and reviewing soldiers of the 84th Brigade at Bulligny, France, on Sept. 7, 1918.

This summer, my wife and I stopped in at tiny Laclede, Missouri, just a few days after we walked the blistering hot tall grass prairies of Kansas and the blessedly cool hallways of Amelia Earhart’s childhood home in Atchison. John “Black Jack” Pershing was born in Laclede in 1860; his boyhood home and first school are neatly preserved there by the Missouri Department of Natural Resources just off U.S. 36.

Pershing’s name was once recognized world-wide; a national hero who led the American Expeditionary Forces in Europe during World War I, his ramrod-straight posture and granite jaw seemingly symbolized American resolve in defeating the Central Powers nearly as much as the image of “Uncle Sam” and the lyrics of “Over There;” he would eventually be named “General of the Armies.”

My interest in Pershing goes all the way back to a grade school Scholastic Books order form. Always a soft touch when it came to buying books, my mom handed me enough change for a 35-cent paperback copy of Don Lawson’s “The United States in World War I” when I was 11 years old; I still have it on a cabin bookshelf.

The book’s spine is no longer capable of holding a single yellowed page in place, and its red, white and blue cover is worn and faded, but if it will stay together long enough, I plan to celebrate yet another birthday myself this very day — Pershing’s birthday — by reading it again; it shouldn’t take as long as it did when I was in the sixth grade.

In those days, it may have actually been the chapters about the “Lost Battalion” or our “Ace of Aces,” Eddie Rickenbacker, or the heroics of Alvin York that held more appeal, but even then I was also drawn a bit to the steely and stoic character of Pershing, not only because he headed the American Expeditionary Force in Europe, but because he steadfastly refused to hand it over to the Allied generals for their personal use in that meat-grinder of a war. His own humility commanded that upon his death, he be buried in Arlington under the same simple government-issued military headstone as his men.

University of Nebraska-Lincoln broadcasting journalism professor, Barney McCoy, has been fascinated by Pershing for years, too. His wonderful documentary, “Black Jack Pershing: Love and War,” explores not only the incredible sense of duty and honor that drove the general to his years of service, but also his personal life, one marked by the tragic deaths of his first wife and three young daughters in a house fire in 1915, the end of a relationship with another woman he loved as his duties in Europe took him from home, and the incredible yet secretive years-long and long-distance romance he maintained with another he would eventually marry just two years before he died.

“When we entered the war, Britain and France did not look at us as a superpower; they looked at us as a wealth of resources,” McCoy says. “Pershing was aware of that. He fought against just throwing us into the war. Just a few weeks before their training, our boys were on farms and walking the streets.”

“It’s impossible to compare the military today to the military then. But look at Pershing after World War I: He was a huge advocate for having a larger standing military to dissuade other nations from challenging us, and he advocated officer training. He knew his army wasn’t ready when he took it to Europe, but at the same time he knew he had no choice but to use it. Germany was making tremendous strides in the war, but as a commander he really cared about his troops,” McCoy adds.

Pershing’s rise in the military was hardly meteoric. At age 18 and with just a high school diploma, he taught African-American students while he pursued a college degree; he eventually applied to West Point, not because of a childhood dream to be a soldier, but because he could get a quality and cost-free education. Challenged by the rigor of the Point’s curriculum, Pershing was, nonetheless, a natural leader, and rather than petition his superiors to delay his required Army duty to study law, he began a long military career that first saw him involved in the last of the Indian wars in the West. From there, and after dozens of stops at posts and in numerous positions — from leading African-American “Buffalo Soldiers” in Montana, to Cuba during the Spanish-American War, to the Filipino Insurrection, to chasing Pancho Villa in Mexico — Pershing eventually rose to the giddy but pressure-packed generalship of the AEF.

“I think his willingness throughout his career to try to understand his adversary, whether it was the Moros in the Philippines or in his experience in the cavalry in the Southwest, says a lot about Pershing,” McCoy told me last week. “He was concerned that Native Americans were being abused and exploited and punished. When he went to South Dakota after Wounded Knee, he was put in charge of the Indians that were massacred by our own military; he spoke very highly of his Indian scouts and their dedication and loyalty. On Mindanao [Philippines], he learned their language and wrote letters in their language. You won’t find many men capable of that. Pershing’s intelligence and willpower should never be underestimated.”

Pershing’s iron public persona belied an intensely private life, particularly his relationship with a young French-Romanian artist named Micheline Resco, whom the general met in France in 1917. The two remained in contact, primarily through coded letters, for decades, and secretly wed just two years before Pershing’s death in 1948 at 88.

When visiting archives in both St. Louis and Washington, D.C., McCoy saw both Resco’s letters to Pershing and his return letters, as well as the cipher they used to decode the notes they were certain would hurt the general’s post-war reputation if discovered; yet Pershing kept virtually everything, writing extensively in personal journals that eventually led to his memoir, “My Experiences in the War,” that won the 1932 Pulitzer Prize.

“Pershing created a telegraph code that they could communicate with. So there are these words that make no sense …. It was incredible to sit there and hold these letters in my hand … I went to the Library of Congress and went through dozens and dozens and dozens of folders with materials from Pershing, for he was meticulous in keeping everything,” McCoy added.

“I found these small photographs like that you’d see from a photo booth, and Resco had sent them to Pershing and he had kept them,” McCoy said. “As I was taking them out of an envelope, rose petals fell out of a card. He’d kept those too.”

You can contact Mike Lunsford at hickory913@gmail.com; his website is at www.mikelunsford.com. Mike’s books can be found in Terre Haute area bookstores and at Amazon. To learn more about John Pershing, he recommends Donald Smythe’s “Pershing: General of the Armies” (Indiana University Press; 1986) and Barney McCoy’s film documentary, “Black Jack Pershing: Love and War” (Painted Rock Productions, 2017). 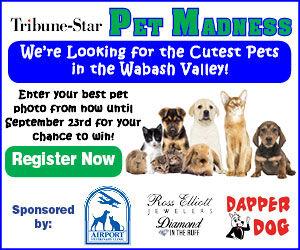