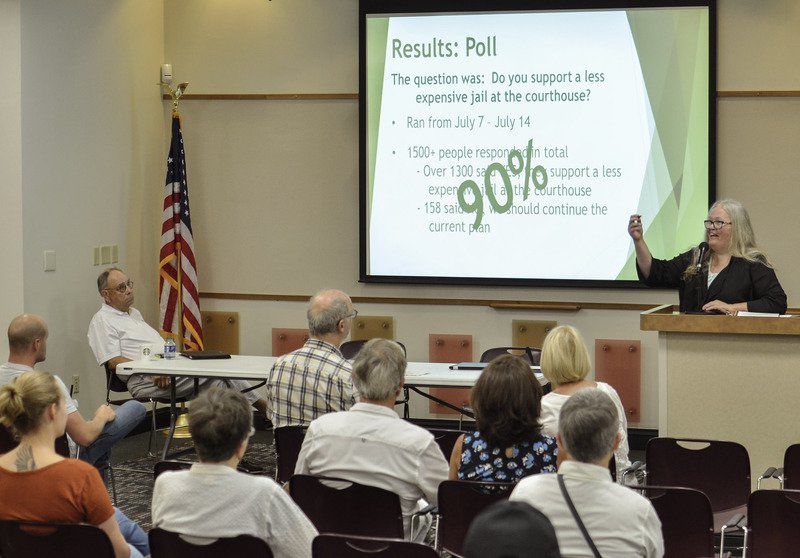 Tribune-Star/Austen LeakeResults in: Liz Brown discusses how people voted in the Facebook poll on the proposed Vigo County Jail plan during Saturday’s Citizens for Better Government forum at the Vigo County Public Library. 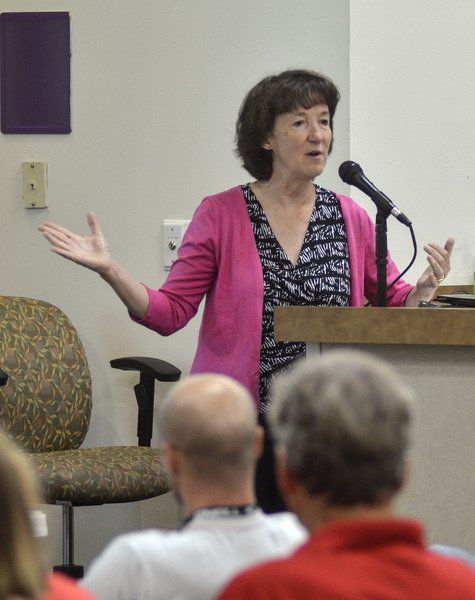 Tribune-Star/Austen Leake Why this matters: Lisa Spence-Bunnett discusses the reasoning behind conducting the poll on the current Vigo County Jail plan during Saturday's forum held by the Citizens for Better Government at the Vigo County Public Library.

More than 1,500 people responded online and more than 1,000 people signed a petition to keep a new Vigo County Jail located next to the courthouse, rather than a proposed distant location, a citizens group announced Saturday.

Citizens for Better Government in Vigo County revealed the results of their Facebook poll and door-to-door petitioning efforts during a public forum at the Vigo County Public Library, and group member Lisa Spence-Bunnett said she thinks many people are well-informed about the jail issue.

The Facebook poll simply asked, “Do you support a less expensive jail at the courthouse?”

More than 1,300 responses supported the less expensive jail at the courthouse, while 158 responses said county leaders should continue with their current plan for a new jail.

Meanwhile, 15 people carried petitions and walked for about 60 hours to visit neighborhoods in each city council district to talk about the jail issue.

The volunteers talked to 1,186 people. Of those, 1,004 signed the petition. About nine were against the position stated on the petition, and the remainder said they could not or would not sign a petition.

The citizens group opposes a jail proposed for 500 W. Honey Creek Drive, arguing the county can save millions by building on the current city/county government campus off First and Cherry Streets in Terre Haute.

“I have listened for over two and a half year to people saying repeatedly the jail should be on the courthouse where it’s been for over a century,” group member Charlie Williams said.

For the site on Honey Creek Drive, the county is working on a jail design that includes 501 beds and 140,000 square feet. The county’s consultants estimate a $60 million construction cost requiring an annual debt service of more than $5.62 million.

Williams said he heard a lot of “F” words as he walked with the petitions, but the main “F” words were frustrations with county, fatigue that the jail issue has lingered for years without resolution, and financial concerns that the jail will eat up money needed for schools.

“My take-away,” said group member Elizabeth “Liz” Brown, “is most of the community doesn’t want what is proposed.”

The group said volunteers will continue to carry the petitions throughout the community in the coming days leading up to a Terre Haute City Council meeting at 6 p.m. Thursday at city hall.

The city council is considering rezoning for the Honey Creek Drive property to allow the jail relocation.

For more information about the efforts of Citizens for Better Government in Vigo County, go online to the group’s Facebook page.