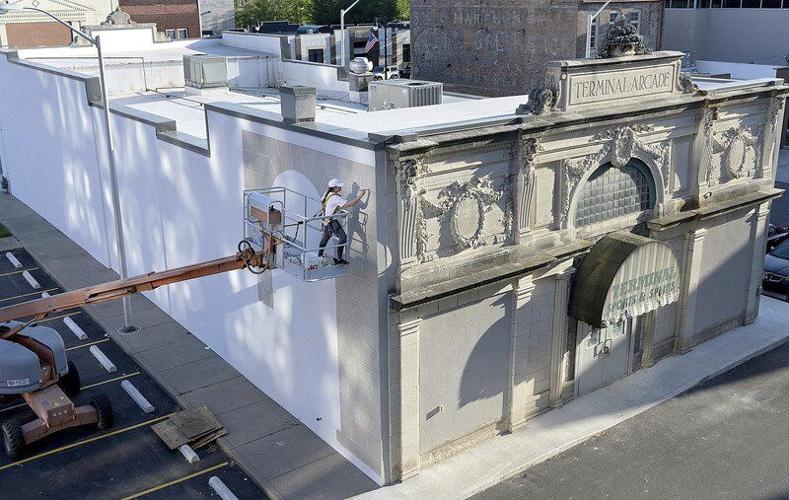 Tribune-Star/Joseph C. GarzaHer latest and largest: Artist Becky Hochhalter works on one of her latest murals on the side of the Terminal Arcade building off of Wabash Avenue on Saturday. 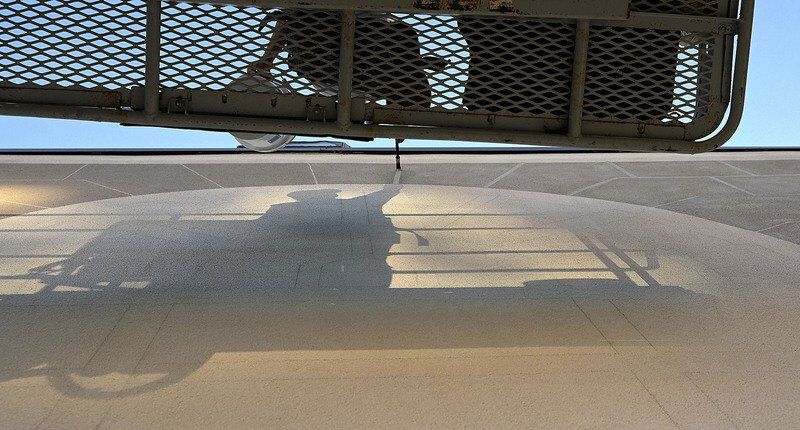 Tribune-Star/Joseph C. GarzaLeaving her mark on a downtown landmark: Artist Becky Hochhalter is silhouetted against the wall of the Terminal Arcade building as she works on one of her latest murals on Saturday off of Wabash Avenue.

The east wall of the Terminal Arcade building in downtown Terre Haute will soon have a unique mural.

It is being painted by Terre Haute artist Becky Hochhalter.

“I’ve had my eye on this wall for at least five years. This mural project has been in the works for some time, almost two years. I’m excited to finally leave my mark on it,” said artist Becky Hochhalter.

At about 24 feet tall and 100 feet wide, it will be the largest mural to date undertaken by Hochhalter, who has already painted more than 30 outdoor public murals in addition to other public art pieces.

She has been working in the evenings to use a projector to trace her design on the side of the Terminal Arcade building at Ninth Street and Wabash Avenue and has about one-third of the design traced.

“I’m not disclosing the full design, but I will let people take this journey with me and be surprised as its unfolds,” Hochhalter said.

However, the design does have several historical references to Terre Haute, she said.

Hochhalter intends to paint using the “trompe l’oeil” art technique that creates an optical illusion of having three dimensions.

“It is going to look like you can walk into it,” she said. “I want the things in the foreground to be life sized so that you can really feel like you are part of this mural.”

The new mural is also close to the new downtown convention center.

“I would love to see downtown and Terre Haute in general become kind of a public art destination,” Hochhalter said. “We have so much public art already in Terre Haute and I would really like to see it become somewhere where people want to come and tour all of our public art and spend the day.”

Hochhalter is also currently working on a mural in Paris, Illinois, and has two other murals to paint — one at Saint Mary-of-the-Woods College and a second at A&B Farms in Brazil.

The last two murals are funded through a state program.

In May, the Indiana Destination Development Corp. awarded nearly $250,000 to fund 49 public art projects throughout the state. Non-matching grants up to $5,000 were awarded to groups statewide for a public art project.

“Projects selected were based on location and visibility to Indiana residents and visitors,” Elaine Bedel, the IDDC’s chief executive officer said in a statement about the grants. “The hope is to create photo opportunities while promoting Indiana.”

The IDDC projects are to be completed by the end of October.

For the Terminal Arcade, Hochhalter said its completion is weather dependent, but expects it will take eight weeks to finish.

The Terminal Arcade has a long history in the city. It was designed by Daniel H. Burnham of Chicago and originally served as the Terre Haute, Indianapolis and Eastern Traction Company interurban station. It opened its doors in 1911.

The Beaux-Arts (beautiful arts) architectural style building is constructed of terra cotta and brick with two identical limestone, granite-based facades on its north and south sides. The facades were the work of Fred Edler and J. W. Quayle. The architectural style is characterized by a flat roof, arched windows, pedimented entrances, symmetry and sculptural details.

The Terminal closed on Jan. 11, 1940 when interurban tracks were shut down.

From Dec. 1, 1949 to 1972, it was the location of the Terre Haute bus station. The building was placed on the National Register of Historic Places on June 30, 1983. It has been privately owned since 1995, once operating as a restaurant/bar. The current owner is Fontanet Holdings Inc., a company owned by Terre Haute businessman Gregory L. Gibson.