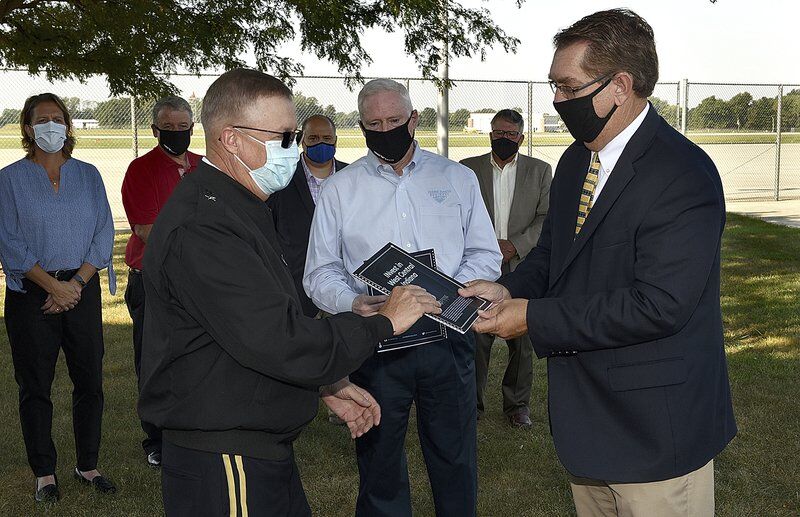 Tribune-Star file/Joseph C. Garza All in: Brigadier Gen. R. Dale Lyles, adjutant general of the Indiana National Guard, accepts an information packet from Mayor Duke Bennett during a news conference at the Terre Haute Regional Airport earlier this month. Lyles met with community, educational and business leaders on Sept. 8 at the airport to launch a coordinated effort to land a new U.S. Air Force F-35 military sales and training center at the airport. 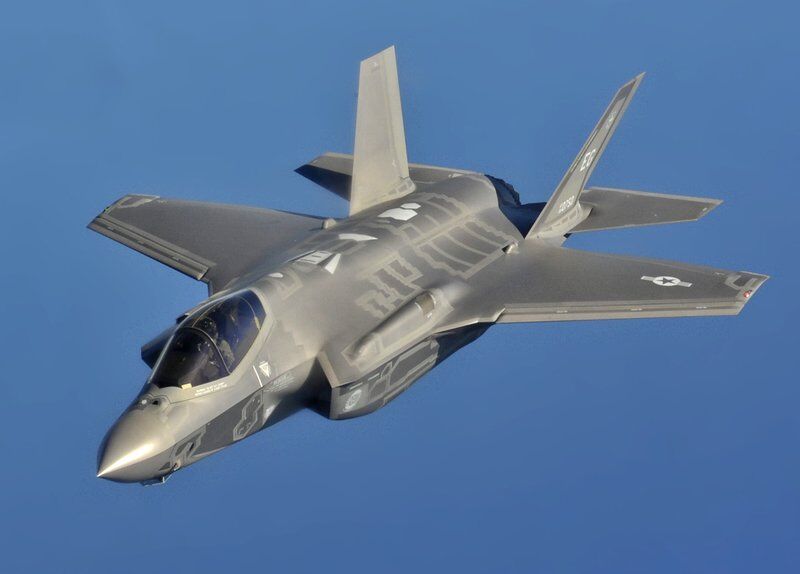 U.S. Air Force/Master Sgt. Donald R. AllenIn the air: An Air Force F-35A Lightning II Joint Strike Fighter  performs an aerial refueling mission with a KC-135 Stratotanker in May 2013 off the coast of northwest Florida. The Air Force intends to establish a permanent foreign military sales training center at a single location in the continental United States for 24 to 36 F-35s, a fifth-generation stealth fighter jet, and Terre Haute is making a push to get that base. 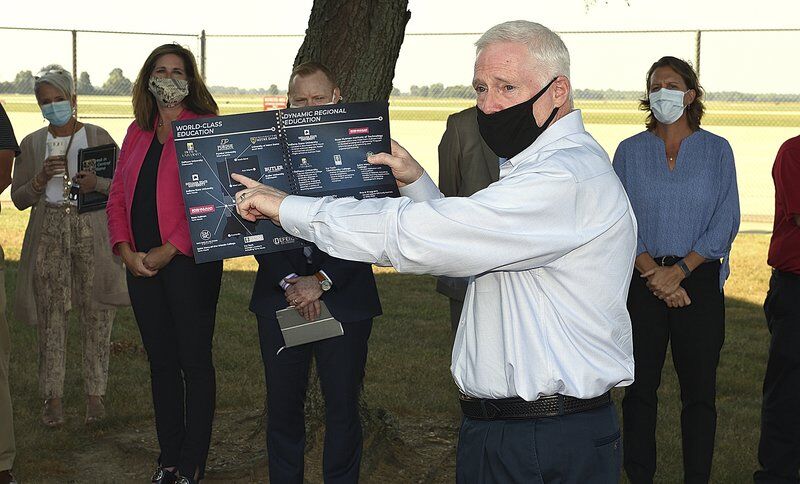 Tribune-Star file/Joseph C. Garza A great place for a training center: Terre Haute Regional Airport Director Jeff Hauser talks about the world-class education available in Indiana and how it could be an asset to a a new U.S. Air Force F-35 military sales and training center during a news conference on Tuesday, Sept. 8, at the airport.

Development of Terre Haute’s east side will have an impact on Terre Haute Regional Airport.

Since November, airport officials have been working with Indianapolis airport consultant Monica Newhouse-Rodriguez, managing principal of Newhouse and Associates, on a new “Airport Gateway Strategic Plan.”

The idea is ensure that development of a new casino and other buildings do not hinder the airport, which houses Indiana’s fourth-longest runway at 9,020 feet long. The airport also has a second runway that is 7,200 feet long.

Spectacle Jack LLC, a subsidiary of Indianapolis-based Spectacle Entertainment, plans to build a 100,000-square-foot casino, affiliated with Hard Rock and to be called Rocksino at Terre Haute. It would offer a total 1,200 machines and gaming tables.

Rick Burger, a member of the airport’s board of directors, chairs the airport’s gateway plan committee. Burger said the top priority, and the reason the committee was formed, was to work to get a water line and water supply that serves the airport as well as east side development.

Airport officials in May 2019 passed a resolution acknowledging they have five years to resolve water flow and pressure issues to satisfy fire protection standards. It’s a project that will impact future development at the airport, possibly even adding water tanks, either at ground level or elevated, to boost water pressure as well.

The airport has Aircraft Rescue and Firefighting (ARFF) on site, and the Terre Haute Fire Department serves as a backup, but improved water pressure and extended water lines are needed. Yet extending water at the airport could be a $1.5 million project and will require hydraulic modeling from Indiana-American Water Co.

“We are finalizing an airport overlay plan of what we know now and what is projected to take place in the next two years,” Burger said.

Additionally, Burger said the gateway strategic plan committee is working on a phased-in beautification plan “in coordination and collaboration with the Terre Haute Chamber of Commerce’s ‘See You in Terre Haute’ community plan,” Burger said. “We want to bring everyone together on the same page.”

Most important in the near future for the airport is way-finding signage, said Rachel Leslie, president of the airport’s board of directors.

“If in fact the numbers are correct that we have been given, then the casino has the potential of bringing nearly 1 million new visitors to our community,” Leslie said in a September board meeting. “We happen to have a potential restaurant (returning to the airport’s terminal) and we have some opportunities with the 181st Intelligence Wing and retail continues to expand here.

“We see our opportunity as being developing what we want that way-finding and signage to look like, making sure the airport is front and center, specifically out here,” Leslie said, referring to the airport’s entrance off Indiana 42 and at the intersection of Indiana 46/U.S. 40 and Indiana 42.

Leslie said working with the Terre Haute Chamber of Commerce “brings that branding opportunity for our community, what do we want to brand ourselves when people first come into our community from different corridors,” including from the intersection of Interstate 70 and U.S. 41.

About 250 acres of airport property has been designated as “Aerotech Park,” and is within both an Airport Development Zone and a Foreign Trade Zone, enabling companies to leverage incentives that allow them to compete nationally and internationally. Examples of industries that the airport could accommodate include, but are not limited to, corporate flight departments, aircraft maintenance repair and overhaul facilities, light industrial, manufacturing, and warehouse distribution.

However, efforts are underway to help return fighter jets to Terre Haute, as the airport is among five sites under consideration of a new military training center.

Secretary of the U.S. Air Force Barbara Barrett on July 6 signed a memorandum to establish a permanent foreign military sales training center at a single location in the continental United States for 24 to 36 F-35s, a fifth-generation stealth fighter jet.

The Republic of Singapore Air Force is an F-35 military sales customer and seeks to co-locate its F-16 squadron, currently at Luke Air Force Base, with its F-35 aircraft at the new long-term sales and training location.

Singapore, located between Malaysia and Indonesia, is a regional security partner of the United States. However, the island nation is small. Rhode Island is nearly four times larger than Singapore, which also has limited air space. Because of that, about a quarter of its combat aircraft are stationed abroad at any one time, mainly in the United States, France and Australia.

In the U.S., Singapore’s pilots now train in Arizona, Idaho, Louisiana, Alaska and Nevada, according to the Republic of Singapore’s Air Force web site.

Brigadier Gen. R. Dale Lyles, adjutant general of the Indiana National Guard, is now part of the effort to help put Terre Haute Regional Airport at the top of the list.

“We are trying to strengthen our presentation to the selection committee,” the general said in a September visit to Terre Haute.

“We have the Camp Atterbury ranges, that have air gunnery ranges there (west of Edinburgh). We have the Jefferson Proving Ground (in Madison) that has an air gunnery range there and we also have some of the largest cyber training capability in the world at Camp Atterbury and Muscatatuck Urban Training Center [near Butlerville] that could also be leveraged by the foreign military sales program to help Singapore and other nations, not only train their air force, but potentially train their land components as well,” Lyles said.

“Indiana has some of the best restricted air space this side of the Mississippi River. We have restricted air space here in the region of Terre Haute, over Camp Atterbury, over the Jefferson Proving Ground and over Muscatatuck that can be used very easily,” Lyles said.

Terre Haute Mayor Duke Bennett said a training center would be a major economic impact and cited the airport’s long history of housing military aircraft, as well the 181st Intelligence Wing based at the airport.

“The economic impact would be tremendous,” the mayor said. “The trickle down effect (for west central Indiana) from that is close to half a billion dollars [$500 million] to begin with. It would not cost the city as much, but more about investments from the federal and state level,” the mayor said.

“... We can build things cheaper than some of the other competitor locations just because of the cost of doing business here. We bring so many things to the table,” Bennett said. “We are the only Indiana option here on the table, so we have the full resources of the state behind us,” the mayor said, including support of Gov. Eric Holcomb.

An initial site survey is slated for the end of October at the airport. The U.S. Air Force will then likely designate a primary selection, with one or possibly two alternate sites by early 2021.

The Air Force would then conduct an environmental impact study, taking 18 months to 2 years, that would then lead to a recommendation to the Secretary of the Air Force, “probably in 2022 for a potential decision or in early 2023,” Lyles said.

The F-35 is developed, produced and supported by an international team of leading aerospace companies, with Lockheed Martin as the prime contractor.