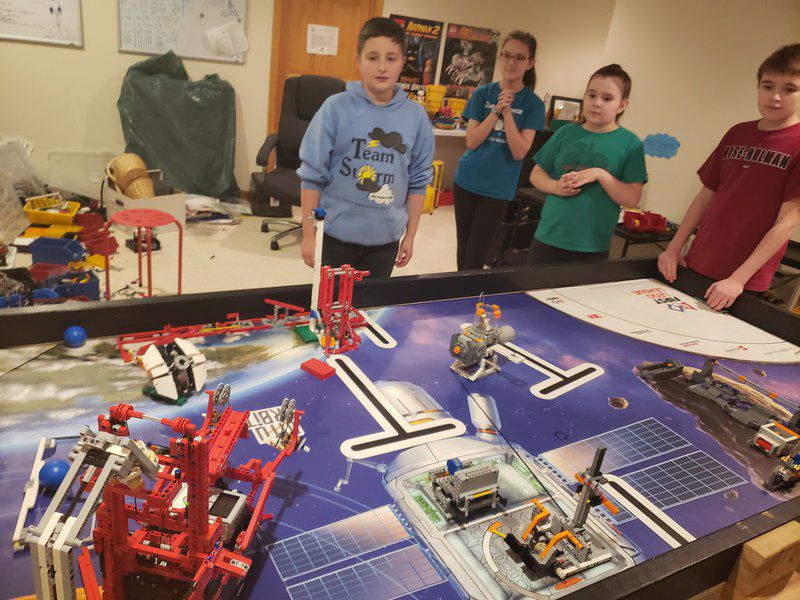 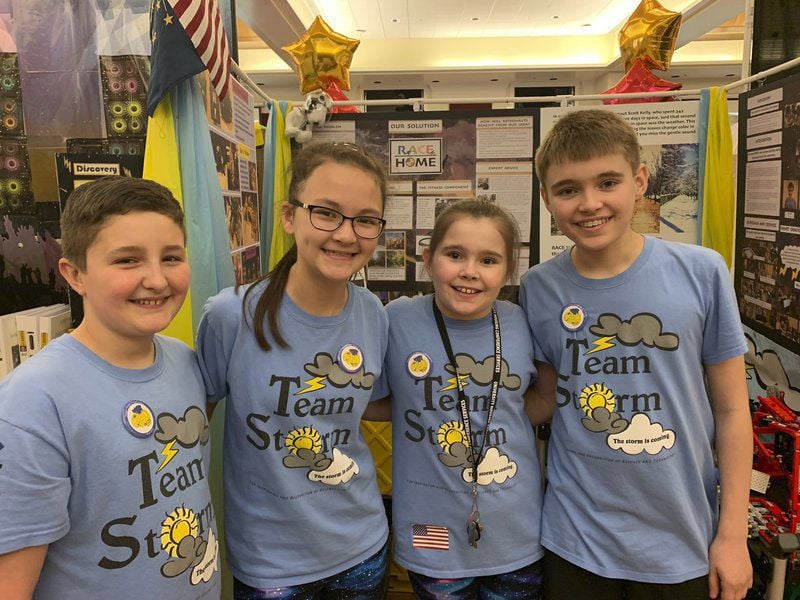 Team Storm was awarded the Champion’s Award during the closing ceremony May 19, in Fayetteville, Arkansas. This is a back-to-back win for the team, which also competed in the event last year and took home the same award.

During the four-day event, the team gave two 35-minute presentations and completed five rounds of the robot game.

The Razorback Invitational also has a tradition of honoring mentors and coaches by adding several names to a Mentor Hall of Fame each year, and both Team Storm coaches, Tom and Lori Langley, who have been coaching the team for seven years (starting in the team’s second year), were added to the Mentor Hall of Fame this year.

• Trevor Langley, 14, a founding member of Team Storm, who has been on the team for eight years. He attends Indiana Connections Academy, an online public school.

• Claire Langley, 11, who is home-schooled and has been on the team for three years.

• Katie Henthorn, 11, who attends St. Patrick School in Terre Haute and has been on the team two years.

• Gabe Coleson, 12, who is homes-schooled and in his first year on the team.

Team Storm meets twice a week to work on the robot and their project solution, and each student also puts in time on their own to conduct research and prepare for competitions.

For their project this year, the team focused on the physical and mental demands on astronauts while isolated in a spacecraft or habitat. A valuable part of the team’s research included consulting a dozen experts either in person or via email.

Team members met with local experts including Dr. Andrew McDonald of the Bone and Joint Center of Terre Haute, LT and Bonnie Thompson, owners of The Wellness Box, and Cary Laxer, a professor of computer science at Rose Hulman Institute of Technology. The team also consulted experts from the NASA Glen Research Center in Ohio and the HI-SEAS Mars Simulation Mission in Hawaii.

Team Storm’s project solution, which they named RACE HOME, is a fitness and mental health solution that combines virtual reality and exercise to supplement astronauts’ other exercise activities within their spacecraft or habitat to create a virtual path home.

It is a competitive running, hiking and biking game that immerses astronauts into their favorite destinations and can be played individually or with another astronaut.

Another important component of the FIRST LEGO League program, and one that Team Storm takes very seriously, is outreach and service. The team leads monthly LEGO Clubs in their community and hosts STEM events at the Terre Haute Children’s Museum several times a year to get children excited about STEM (science, technology, engineering and math). The team also demonstrates its robot at events both locally and in the Indianapolis area to try to help recruit new FIRST LEGO League teams.

Many local businesses from around the Wabash Valley helped the team raise $1,000 to attend the event by donating gift cards. Team Storm sends thanks to them all for their generosity and support.