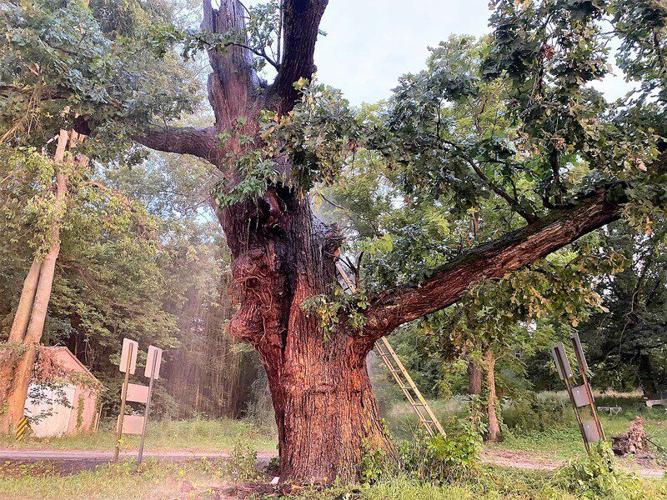 Historic, resilient tree: The famed bur oak tree in the middle of Greencastle Road in northeastern Vigo County smolders after a suspicious fire Saturday  night. Crews from the Nevins Township Volunteer Fire Department and a tanker from Rosedale Volunteer Fire Department tended to the fire for more than two hours. County officials are optimistic the tree will survive. 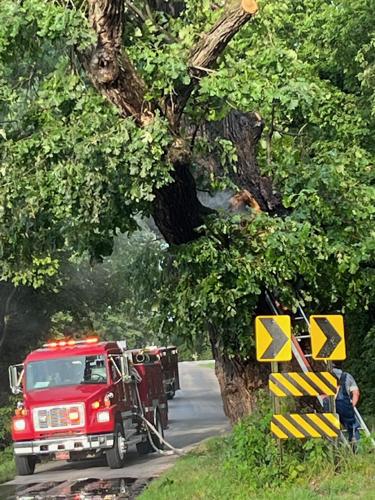 The resilience of a century-plus-old oak tree has been severely tested this summer.

Two units from the Nevins Township Volunteer Fire Department responded to a 6:17 p.m. call Saturday and found the tree ablaze.

"It was on fire. There were flames going up that whole side," Nevins VFD Chief Cory Roberts said Monday morning. The crews also saw dark, scorched areas on the tree.

A tanker truck from the nearby Rosedale Volunteer Fire Department brought additional water as crews tended to the fire. Those crews were at the scene for more 2 1/2 hours, Roberts said. Foul play is suspected, he added.

"There was no lightning strike and it was very humid that day," Roberts said. "There was definitely something that started it."

Kearns said anyone with information about the tree catching fire should contact the Vigo County Sheriff's Department. "We're doing an investigation about that," Kearns said.

The tree was fresh off a recent trimming to preserve its life. Two large portions of the oak fell a month ago, and another limb fell off a week later. County officials decided to trim the two large lateral branches of the tree to reduce the weight load on the trunk. Inspections by arborists showed the tree was hollow in spots, with bees occupying those voids.

Historic recounts of the tree offer only speculation as to why it's in the middle of the road.

One historian shared a theory with Tribune-Star columnist Mike Lunsford years ago. He theorized that when heavy rains fell and the roadway going around the tree got muddy, travelers wore down a detour around the dry side, creating two lanes around the oak. Over time, the road remained split to bypass the tree.

It is one of at least two famous trees in the middle of a road. Another exists in Audubon County, Iowa.

"Our tree in the middle of Greencastle Road has experienced many challenges lately, and this is another unfortunate setback," Kearns said of Saturday's fire. "And I hope the tree will be there for many, many years to come."

The Off Season: ‘The oak tree loves patience’

Days ago, as a typically hot and muggy July Saturday was coming to an end, I told my wife I wanted to drive over to see the “tree in the middle of the road,” for it might not be there much longer, maybe.