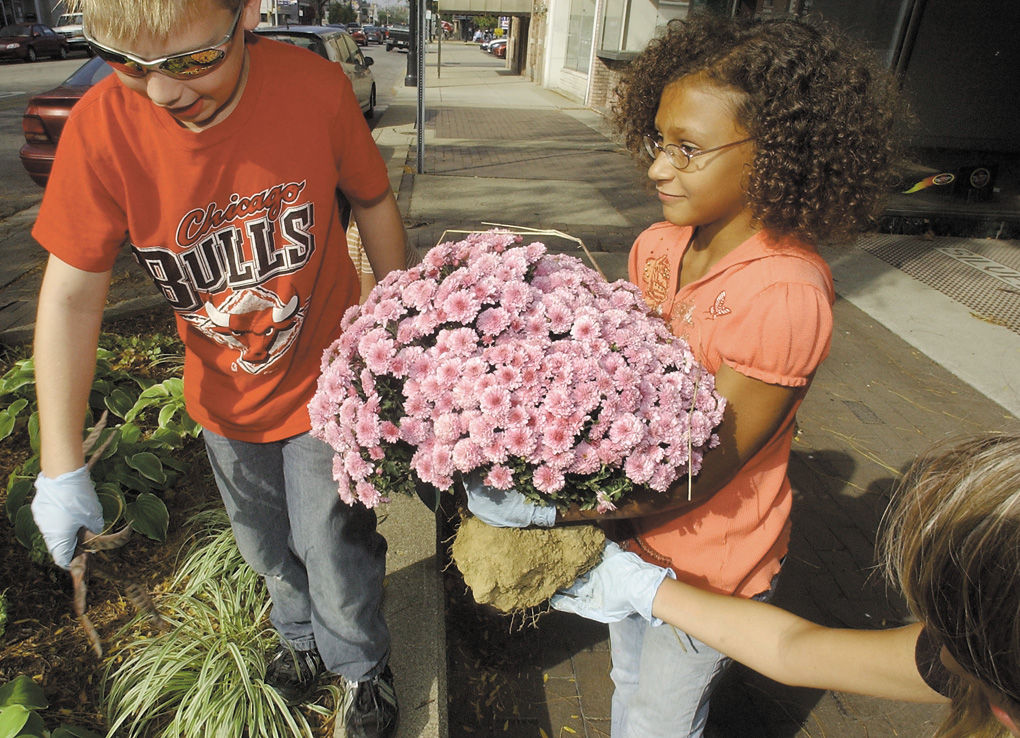 Ready for planting: Ouabache Elementary School fifth-grader Tiffany Webb, 10, holds a mum plant as fellow student Brandon Rubacha, 10, prepares to dig a small hole for it in one of the flower beds along Wabash Avenue on Wednesday. 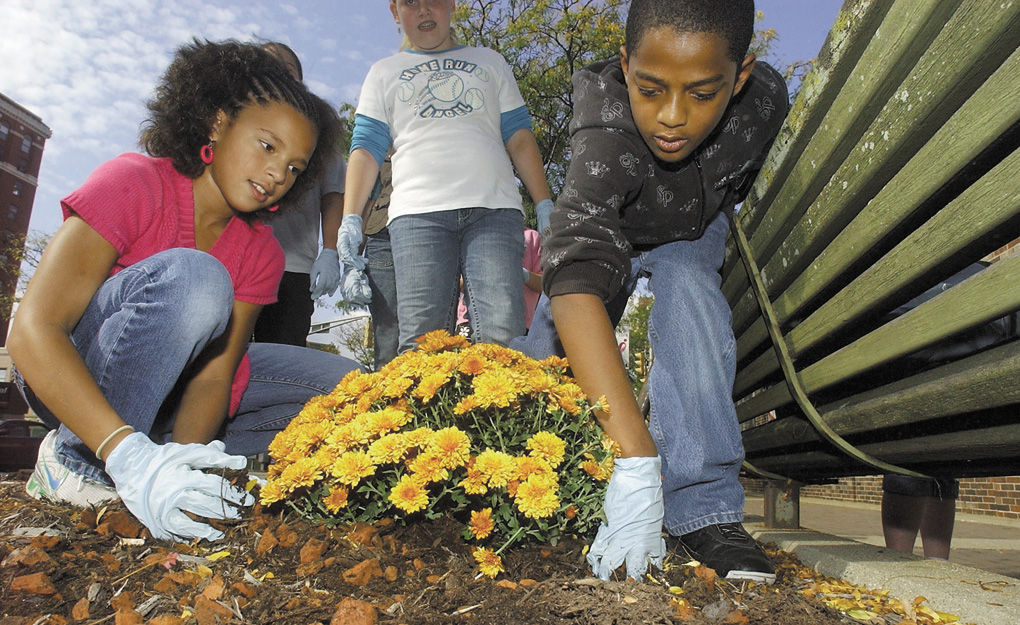 Ready for planting: Ouabache Elementary School fifth-grader Tiffany Webb, 10, holds a mum plant as fellow student Brandon Rubacha, 10, prepares to dig a small hole for it in one of the flower beds along Wabash Avenue on Wednesday.

The giggles of children permeated downtown Terre Haute on Wednesday as students from four schools volunteered to spruce up flower beds as part of a community service project. About three dozen students from Deming, Franklin and Ouabache elementary schools and Chauncey Rose Middle School cleared away debris, planted brightly colored mums and picked up trash in the flower beds. “We’re planting flowers to make downtown Terre Haute look good,” said Joshua Dadson, a Chauncey Rose eighth-grader, as he helped some younger Deming Elementary students work on a flower bed near Sixth Street and Wabash Avenue. The students had fun, but the sweat on their brows showed the work was not easy. Earlier this year, Deming Principal Susan Mardis told Mayor Duke Bennett that her students would be happy to assist with the flower beds, if needed. Bennett decided to take her up on her offer. Mardis then contacted Chauncey Rose as well as the two other elementary schools that feed into the middle school. Chauncey Rose has a long tradition of community service, she said. “I thought, let’s get more schools involved,” Mardis said. She hopes the students’ efforts will help build their sense of pride in Terre Haute. Also, all four schools receive a lot of community support. “We need to give back,” she said. Chauncey Rose brought five members of its eighth-grade leadership team, said Gary Dellmo, assistant principal. “We’re giving back to the community,” he said. Also, the middle-school students served as role models to the elementary children. “The little ones are looking up to them,” he said. Mayor Bennett said that with the city’s limited resources, the volunteer efforts are needed and appreciated. “We’ve been wanting to get the boxes cleaned up downtown and make sure we do it a couple of times per year,” said Bennett, who along with his wife, Pam, also worked on some of the downtown flower boxes. “We want to spruce up the downtown” for fall and ISU’s Homecoming parade, he said. Two local businesses donated mums or sold them at a discount. Next year, Bennett hopes to have businesses, service organizations and anyone else adopt the flower boxes and maintain them. The city would be able to provide some flowers and mulch, he said. There are about 90 flower boxes downtown between 14th and Third streets and along a few side streets, the mayor said. The students’ volunteer efforts are important, he said. “We really just don’t have extra city resources to take on more and more of this kind of stuff,” he said. The flower boxes “are very visible” and the goal next year “is to have more of a system in place using volunteers on a regular basis.” The students, who volunteered from 11 a.m. to 1 p.m. on a perfect fall day, focused much of their efforts on Wabash Avenue. “I really appreciate you guys coming out here today,” Bennett told the group as they assembled at Fifth Street and Wabash Avenue, the site of the former city bus transfer center. “It’s a beautiful day. We’ll plant a few flowers and make it look good … then you can bring Mom and Dad and show them what you did,” the mayor said. At a flower bed near Sixth Street and Wabash Avenue, four boys from Ouabache Elementary worked together to dig a hole for a mum. “Soon it will be a dirt fight,” one student said. Ouabache fifth-grader Andrew Paauwe playfully observed that “girls have green thumbs, but boys have green fingers,” as he held his index finger close to his nose. Hanna Petty, a Ouabache fifth-grader, said students were working downtown “to plant flowers and to make our community look better.” Students wore blue plastic gloves as they cleared debris, dug holes and planted yellow, burnt orange, purple and white mums. Ouabache fifth-grader Brandon Rubacha even wore his shades. “We wanted to come and help the community look a little better,” he said. Paauwe said he has experience in this area. “My mom has actually made me work out in the yard,” he said. The students were “having a blast,” said Ouabache fifth-grade teacher Christina Brown. Sue Loughlin can be reached at (812) 231-4235 or sue.loughlin@tribstar.com.