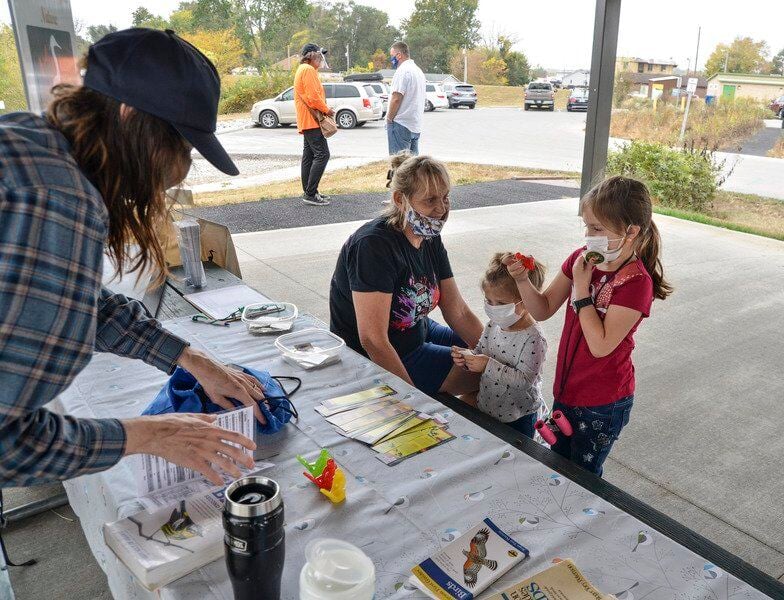 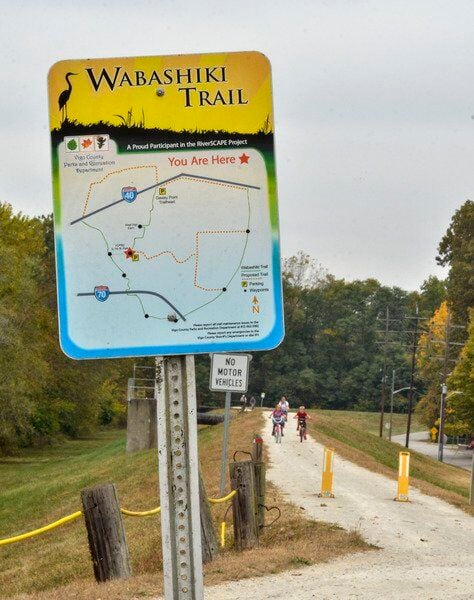 Tribune-Star/Austen Leake Ride on the trail: Bike tours exploring the Wabashiki Trail were offered on Saturday during the Explore Wabashiki Day at Dewey Point.

Tribune-Star/Austen Leake Ride on the trail: Bike tours exploring the Wabashiki Trail were offered on Saturday during the Explore Wabashiki Day at Dewey Point.

Champions of the Wabashiki Wetlands in western Vigo County hosted Saturday an event meant to show off all the property has to offer.

Explore Wabashiki Day — hosted by Indiana Department of Natural Resources, Riverscape and Vigo County Parks and Recreation Department — was an effort to highlight the thousands of acres of natural wetlands that are home to a host of recreation opportunities.

From hunting, fishing and trapping to bicycling, kayaking and bird watching, the wetlands have a little of everything to offer.

“We really want to show people, maybe who have been hesitant to come out before, what we have here and help them be comfortable going out and exploring,” said Michael Shaw, president of Riverscape. “It is a beautiful resource and a unique one being so close to downtown Terre Haute.

“It’s one of the largest fish and wildlife properties near an urban center in the midwest.”

Saturday’s event featured guided bicycle rides, kids activities, bird watching and ample opportunities to walk the Wabashiki Trail. Shaw said the offerings are just some of what folks can do when visiting the wetlands.

“What’s so great is that yes, the biodiversity is great, but so too are the ways people can engage the properties,” Shaw said.

“On the state property hunting is available when in season. And appropriate for Cross County Town USA, we have trails that are great for runners. And for those who aren’t hunters or runners, we have trails for simple hikes around the butterfly garden. There is something for every level and interest.”

Laura Maloney, natural resource programmer with the Vigo parks department, said that along with all that Shaw mentioned, the parks department makes efforts to host ongoing programming on its part of the property.

Maloney said the kayak launch at Dewey Point has been a success and proven popular with those who kayak.

“It’s absolutely beautiful in spring and early summer,” Maloney said. “Unfortunately with the drought right now, it’d be hard to go out here and paddle.

“But with the success we’ve seen with it, we’re looking to add some more programming to expand on Dewey Point’s access to the wetlands.”

She said the department hopes to kick off their kayak programming in 2021.

Also happening throughout next year will be construction of a pedestrian walkway on the south side of U.S. 150 between Dewey Point on the west side of the river and First Street on the east.

Slated to be completed by 2022, the walkway will complete the Wabashiki loop between the Dewey Point and River Levee trailheads. It will also, said Indiana Sen. Jon Ford, complete another of the community’s plans in building for tomorrow.

“We as a community are collaborating and working together and coming up with plans,” said Ford, R - Terre Haute. “We’ve seen how communities like Fort Wayne and Evansville are doing things and I think we are now coming up with our ideas on what we want and then taking to them to the state and saying this is what we want.

“This walkway is a great example of that. When I was first elected groups had a nice package put together, a sell sheet , if you will — on why this walkway is important. I showed it all over the state and got INDOT interested. It’s underway now only because of community collaboration.”

Chris Herrington, whose family has long been connected with the wetlands — what with his mother taking regular walks on the property and his father having been a president of the levee board — said seeing folks come out and celebrate the wetlands is a dream come true.

“This is all such a dream come true,” Herrington said. “I live in St. Louis but wanted to be here today and volunteer my time.”

Herrington, who along with his sisters hosts Emily’s Walk annually at Dewey Point to memorialize their mother, has done far more in recent years than donate just his time.

Via donations and proceeds from Emily’s Walk, Herrington and family have raised tens of thousands for the preservation of the wetlands.

“We have been so blessed by so many people here,” Herrington said. “It’s been made easy for us to help get and keep people interested in this place. And we hope to continue to be able to do that.”