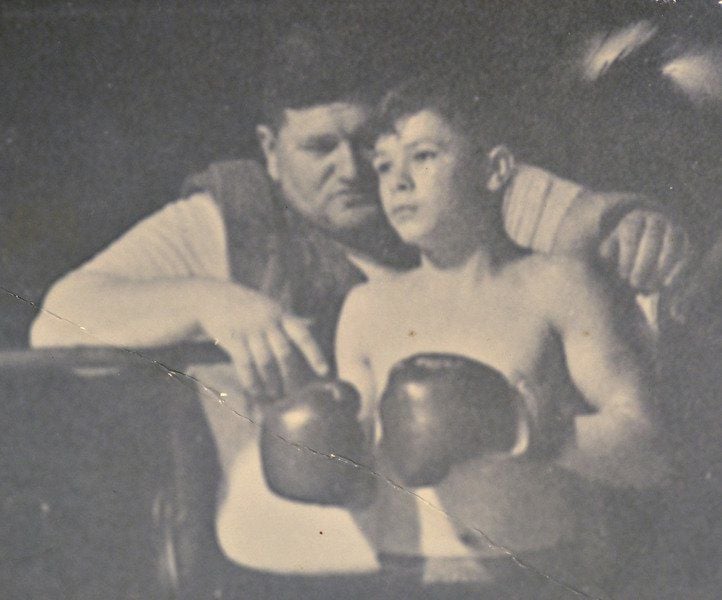 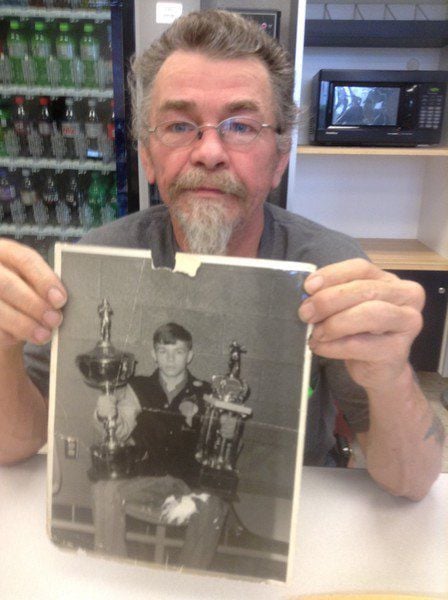 Remembering the glory days: Mickey Umphries holds up an old black and white photo of himself from when he competed for the West Terre Haute Boxing Club in the early 1970s. 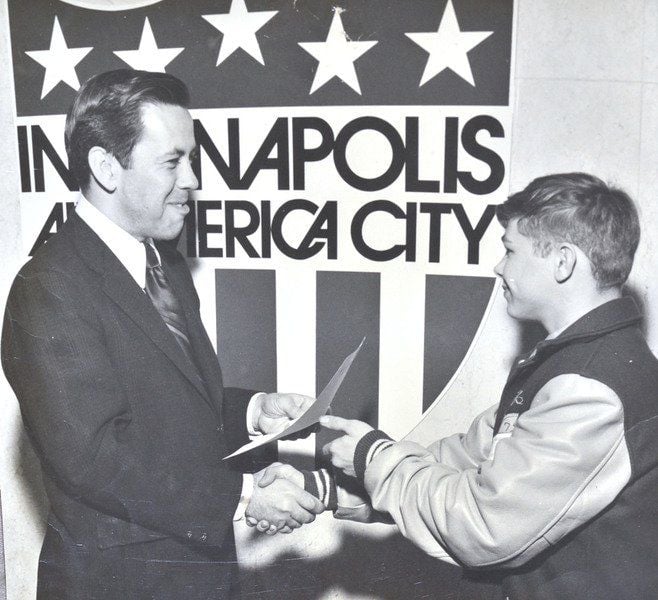 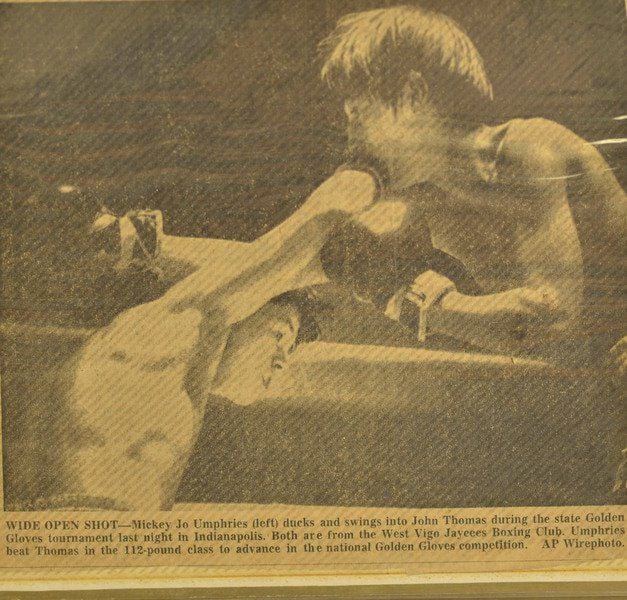 Contact: An image in Mickey Umphries’ scrapbook shows him landing a punch on John Thomas in their Golden Gloves match in Indianapolis decades ago. 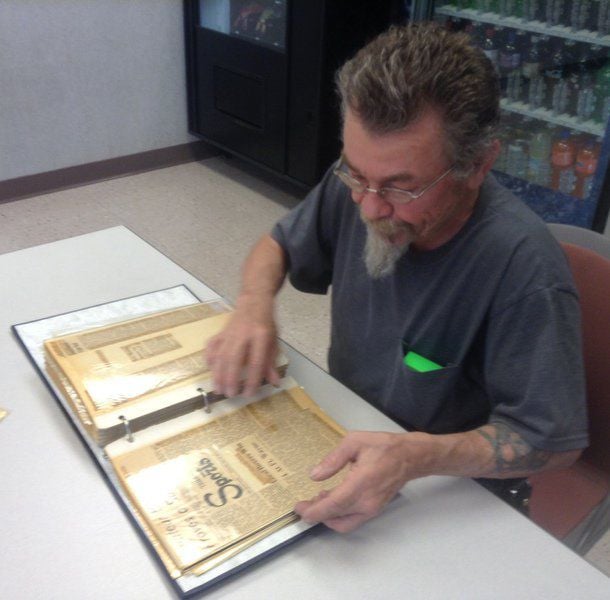 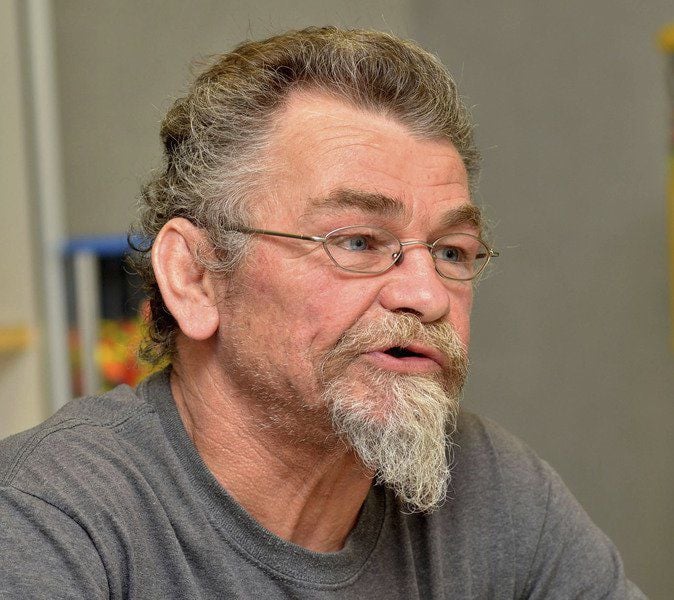 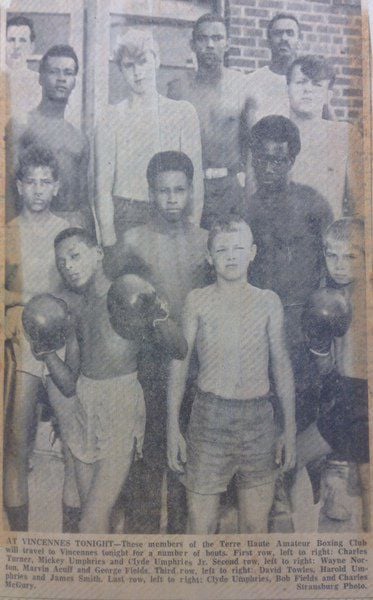 What it was like back then: Photos highlighting the success of Wabash Valley amateur boxing clubs were common in the Terre Haute Tribune and Terre Haute Star newspapers back in the 1960s and early 1970s. Here, a group shot of the Terre Haute Amateur Boxing Club, with Mickey Umphries second from the left in the front row, appears.

Remembering the glory days: Mickey Umphries holds up an old black and white photo of himself from when he competed for the West Terre Haute Boxing Club in the early 1970s.

Contact: An image in Mickey Umphries’ scrapbook shows him landing a punch on John Thomas in their Golden Gloves match in Indianapolis decades ago.

What it was like back then: Photos highlighting the success of Wabash Valley amateur boxing clubs were common in the Terre Haute Tribune and Terre Haute Star newspapers back in the 1960s and early 1970s. Here, a group shot of the Terre Haute Amateur Boxing Club, with Mickey Umphries second from the left in the front row, appears.

With each flick of his 88-page scrapbook — bulging with Polaroid photos and faded Terre Haute Star and Tribune newspaper clippings from his 10 years as an amateur boxer — Mickey Umphries relives a treasured memory.

He carries the tattered book and other scattered photos in a black briefcase so they won’t deteriorate any more than they already have.

“It was the highlight of my life,” Umphries said of the 1965-75 time frame. “I met some of the greatest people I’ve ever met, boxing all over the world.”

Besides images of himself throwing punches or accepting awards, the 60-year-old Umphries sees in that scrapbook some of his lifelong buddies that he met through boxing — Gary Smith, Bill “John” Thomas, David Towles, Jim Smith, Fred Tompkins, Rick Johnson and David Edwards to name a few.

Some were white and others were black. Color no longer matters to Umphries — born in West Terre Haute in the mid-1950s — thanks to boxing.

“All of the guys I boxed with, we’re still friends to this day, every one of them,” emphasized Umphries, who works nights at Sony DADC. “Oh, there’s a few that’s passed away. The ones that did pass away, I went and visited at their funeral.”

Gary Smith, 61, said he’s also on good terms with the same teenagers he met in the early 1970s.

“I see some of them once in a while,” he told the Tribune-Star last week. “Most of them are doing well.”

Umphries said his father, the late Clyde Umphries, started the 1960s/1970s version of the West Terre Haute Boxing Club. Thomas, now 62 and a Vigo County councilman as well as owner of Double Bee Fence Co. and East Haythorne Self Storage, remembers Lark and Dick Brokaw Sr. being the ones who resurrected it.

Either way, club members trained and sparred inside the West Terre Haute Town Hall, located in the building where the town’s police department sits now.

“We had a couple heavy bags that hung from the ceiling,” Thomas pointed out. “We had a peanut bag. We did a lot of skipping rope and a lot of road work. Don Lark fabricated a ring. It ended up being a pretty nice ring. We practiced there and we also held our matches there at that time.

“We also boxed at what is now the West Vigo Community’s gym [on Johnson Avenue]. We would set up there and hold matches.”

A 1972 graduate of West Vigo High School, Thomas estimated that he boxed for the club about five years, either in the 112-pound or 118-pound weight classes. He said the club started at the Terre Haute Boys Club in the mid-1960s before it moved to West Terre Haute in the late 1960s.

“We went and got boys off the street that were troubled,” recalled the 5-foot-1 Mickey Umphries, who grew up in West Terre Haute and competed in the 112 class.

He now lives on the north side of Terre Haute with his wife, Debbie.

Not surprisingly, most of the youths chose boxing over imprisonment.

Umphries, who graduated from Concannon Middle School and West Vigo, said “quite a few of them, including myself” could have gone down an ugly path in life had it not been for boxing.

“It kept me off the streets and kept me out of a lot of mischief,” Gary Smith acknowledged.

“I was out of hand,” Umphries admitted. “I was fighting anybody and everybody — teachers, other students. ... I was getting my ass whipped [by school officials]. They didn’t suspend us back then. They whipped our butts. Back then, they’d give us an ass-whippin’. Then when you’d go home, you’d get another one.”

But by the time he got to West Vigo, his behavior had improved, he said.

“My first year at West Vigo, I was a [state] Golden Gloves champion,” Umphries mentioned. “So I was pretty much relaxed.”

What does Umphries think would have happened to him if he had never turned to organized boxing as a youth?

“I’d be in prison,” he replied without hesitation. “I had a bad temper. This [boxing] controlled me and settled me down. ... [The West Terre Haute boxing coaches and trainers] taught us right and wrong, respect and loyalty.”

“I’m doing great,” Umphries stressed. “My temper has calmed down a lot. I used to have a temper. All you had to do was look wrong at me and I would pounce on you.”

“[Organized boxing] taught you that if you wanted to be successful, you had to put in hard work, which rolled over to being successful in everyday business,” Thomas explained. “The harder you work, the better you are.”

After training with Lark and Wigfall, several of these boys improved their skills inside the ring and traveled as a team to out-of-town tournaments.

“There were a lot of good fighters,” Thomas pointed out. “Mickey was a good fighter. We were a close-knit group. It was a good time. We grew up poor over in that area. It helped set a positive direction for some kids. There’s no doubt.”

“When we walked into a boxing gym and they found out Terre Haute was there, a lot of them packed up and walked out,” Umphries claimed, “because we were that well-respected and we were in shape.”

For members of the WTH Boxing Club, being in shape was the result of jogging 10 miles a day and training four hours a night five days a week, he said.

“We did not get to fight unless we were in shape,” Umphries insisted.

Umphries said the highlight of his boxing career was getting an opportunity to compete in the national Golden Gloves tournament in Minneapolis, Minn., in 1972 when he was 16.

“I had the most wonderful time,” he reflected. “I did good, but I didn’t win [the championship]. I got third place.”

Thomas remembers traveling to Vincennes, Indianapolis, Breckinridge, Ky., and Des Moines, Iowa, as a youngster. He also competed in a national Golden Gloves tournament in the early 1970s at Dallas-Fort Worth after he won a state championship. He thinks he was in the 112 class, but memories tend to fade after 40-plus years.

These boys didn’t always fight out of town, however.

Umphries, who was 10 when he joined the club and 20 when he left it, remembers standing-room-only crowds at the old Terre Haute Boys & Girls Club to watch tournaments.

“We’d get four or five hundred people in that gym,” he said. “You couldn’t find a seat. There were people standing out in the lobby.”

Considering all the fun and success these boys enjoyed, what ever happened to the West Terre Haute Boxing Club?

Umphries thinks it ceased to exist in the late 1970s.

Back in the tumultuous late 1960s and early 1970s, these youngsters learned more than boxing and discipline as members of the West Terre Haute Boxing Club.

Asked how many experiences he had with black people before he got involved in boxing, Umphries quickly answered: “None.”

“I didn’t think much of them at first,” he admitted. “I really didn’t want to be around ‘em, until I got to know ‘em. After I got to know ‘em ... they became friends and brothers to me. I kept it that way and it’s still that way to this day.”

Some of his West Terre Haute neighbors took longer to adapt to the increase in black presence created by the boxing club during that era.

“I think people over there didn’t like it at first,” Smith added. “But after they got to know ‘em, they started cheering ‘em on before it was all said and done.