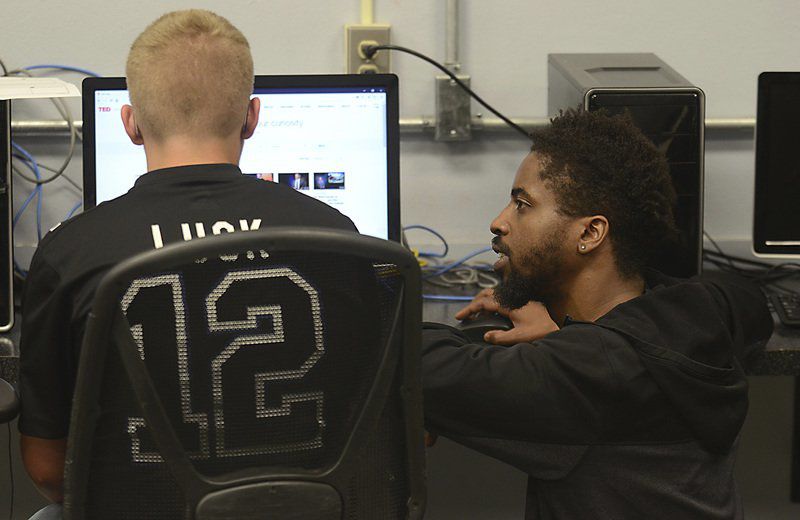 Tribune-Star/Joseph C. GarzaHelping them work through their suspension: Calvin Burnett, right, an instructor with Covered Bridge Special Education District, helps a student with a computer program at the Terre Haute Boys & Girls Club on Thursday. The club is a site for one of the district’s alternative-to-suspension locations. 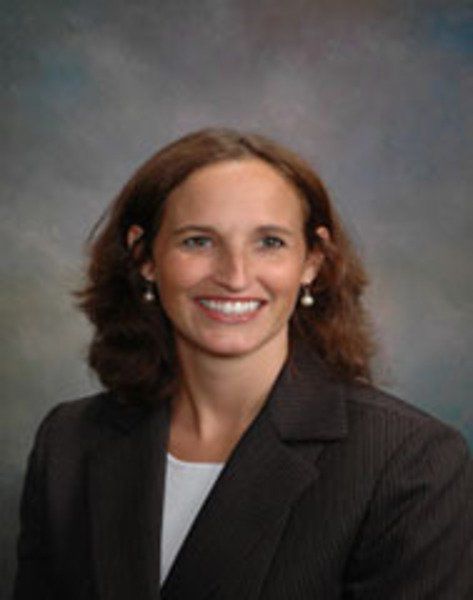 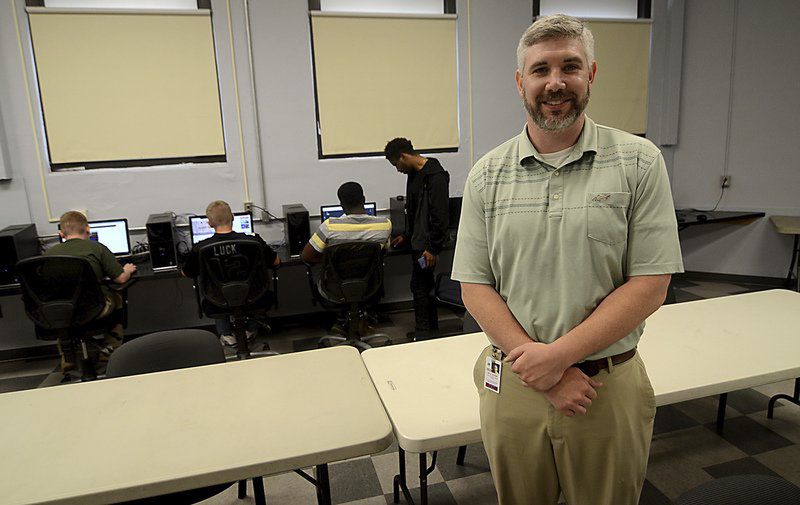 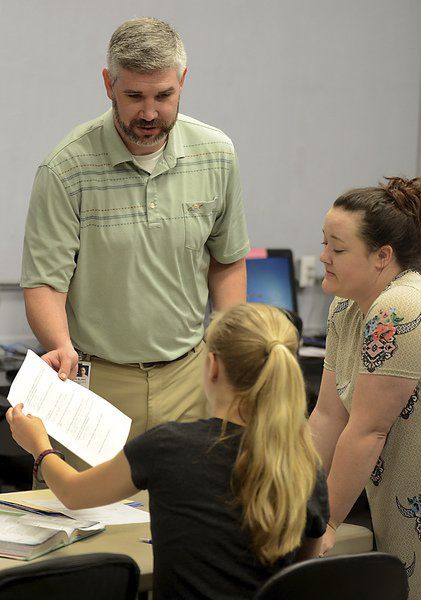 Tribune-Star/Joseph C. GarzaHelping them out by not kicking them out: Nate Blank, a behavior interventionist with Covered Bridge Special Education District, helps a student in the district’s alternative-to-suspension program on Thursday with instructor Alexa Zimmerman Grav at the Terre Haute Boys & Girls Club.

Tribune-Star/Joseph C. GarzaHelping them work through their suspension: Calvin Burnett, right, an instructor with Covered Bridge Special Education District, helps a student with a computer program at the Terre Haute Boys & Girls Club on Thursday. The club is a site for one of the district’s alternative-to-suspension locations.

Four middle and high school students stood in the Howard Sharpe gym at the Terre Haute Boys & Girls Club Thursday and worked with a teacher, instructor and behavior interventionist on social skills.

The Vigo County School Corp. students were attending an alternative-to-suspension program in which they not only keep up with academic work, but also learn about what got them into trouble, how to correct it and ways to avoid that behavior in the future.

Nate Blank, a behavior intervention coach who supervises the alternative-to-suspension programs for middle and high school students in Vigo County schools, sees the difference the programs make in changing behavior. He works for Covered Bridge Special Education District, which supports the programs housed at the Boys & Girls Club and another site.

“They are getting to work through whatever the problem is or they are figuring out why they are behaving the way they are,” Blank said. “We provide interventions and social skills for them and different ways to handle it if situations come up again.”

Blank sees positive results, with a lot fewer students coming back multiple times. Also, an emphasis on positive behavior seeks to “reward students for meeting expectations rather than punish them.”

The alternative-to-suspension programs remove students from their school, but they continue to receive education at a different site. The “Spark” program is run out of a group home, and the other is based at the Boys and Girls Club.

The sites have licensed teachers as well as programming to work on social and emotional issues as students address the behaviors that got them in trouble; students complete their regular school assignments there.

For those who face expulsion hearings, how well they do in the alternative program weighs pretty heavily when Tom Balitewicz, director of student services, makes a decision as to whether students can go back to school.

“It’s a different setting, but they are still being educated,” said Stacy Mason, VCSC executive director of secondary education. “It counts as a day’s attendance and it does not count as an out-of-school suspension.”

The goal is for students to understand what got them into trouble, correct it and continue their education.

“When you did an out-of-school suspension, that continued education piece wasn’t happening,” Mason said. “So this program allows students to not miss a beat as to what is going on in the classroom.”

For less serious infractions, North Vigo and South Vigo also have programs that run from 4 p.m. to 6 p.m. They are run by classroom teachers who are paid outside of the regular school day to work there, Mason said.

For many years, the VCSC also has had behavior interventionists who have “helped curb those inappropriate behaviors at the school so they never reached the level of out-of-school suspensions,” Mason said. They also follow up with students who have participated in the alternative-to-suspension programs and returned to their regular school.

There are five behavior interventionists at the secondary level, including three who work with middle schools and two who work with the alternative-to-suspension sites.

There are 15.5 behavior interventionists at the elementary level.

Vigo County School Corp. progress in reducing out-of-school suspensions and expulsions bodes well for the district, especially with new legislation that aims for the same goal. House Bill 1421, which passed in the regular 2018 General Assembly, aims to promote positive school discipline and reduce the number of students suspended or expelled.

It builds on prior legislation, HEA 1419 passed in 2009, that required school corporations to develop a plan to improve student behavior and discipline and to periodically review the plan. It also required the Indiana Department of Education to develop a model plan.

The recently passed law, House Bill 1421, calls for the following:

•The IDOE’s model plan to improve student behavior must reduce out-of-school suspensions and disproportionality in discipline and expulsion [disproportionality refers to discipline that affects some groups — such as minorities — more than others]; limit referrals to law enforcement to cases necessary to protect the health and safety of students or school employees; include policies to address bullying and cyberbullying on school property.

• The state must survey school districts about their use of positive discipline and report it to the legislature by Sept. 1.

• It called for a legislative study committee to look at positive school discipline and restorative justice practices [such as conflict resolution] used by schools, but it was not assigned to committee Tuesday. State Rep. Bob Behning, R-Indianapolis, who chairs the standing house education committee and is expected to chair the summer study committee, can still request that it be assigned, according to Samantha Holifield, his press secretary.

“I try to look at what is in the best interest of kids,” Behning said. “The reality is if the child is not in the classroom ... there is no way that child could be learning and moving forward.”

He said it’s never made sense to him that a student might be disciplined for truancy by suspending or expelling them. “Isn’t that giving them exactly what they want? Why would you do something like that?” Behning said.

Behning also is concerned about Indiana data showing African-American students are suspended and expelled at higher rates than other students.

In a Jan. 30 School Matters article, author Steve Hinnefeld wrote, “Harsh and racially disparate discipline is an issue in schools across the country, and it’s arguably worse in Indiana than in most other states. In 2012-13, the most recent year for which data are available, one in 10 Indiana students was suspended, and one in five African-Americans were suspended.”

Indiana State Department of Education data for 2016-17 “show about 8 percent of all students being suspended [in school or out of school] at least once and 19 percent of African American students,” according to Adam Baker, IDOE press secretary.

Students with disabilities were more than twice as likely as students without disabilities to be suspended in K-12 settings, according to the U.S. Department of Education national report.

The data is “pretty startling,” Behning said. HB 1421 as passed removed originally proposed mandates that would have required schools to adopt positive discipline policies; some educators and legislators had concerns about those mandates, which were removed from the bill.

The intent of the legislation is to shine some light on the data, look at best practices and provide training for educators “so that discipline doesn’t have to get to the level where you are expelling or suspending a student,” Behning said. Options include alternative settings where students can still receive educational services.

Kelly Wittman, IDOE senior adviser, said HB 1421 builds on prior legislation, which called for the state to develop a model plan to improve discipline and behavior within schools. The department looks forward to surveying districts about positive behavior interventions in their schools, she said.

“Things are a lot different than they were back then” in 2009, when HEA 1419 passed, she said. “Student needs have changed and the challenges students face have changed,” which can lead to behaviors that result in discipline.

Some of those changes include children from families struggling with the opioid crisis; also, social media has changed dramatically, she said. House Bill 1421 addresses social media by calling for the state to include not only bullying, but cyberbullying, in its model plan.

“Social media is a whole different animal today for parents and children to deal with,” Wittman said. “This brings those things under the umbrella of that behavior plan.”

Wittman believes when HEA 1419 required districts to develop plans to improve student behavior, many schools began implementing Positive Behavioral Intervention and Supports. It’s used by many schools, not just in Indiana but across the nation, she said.

In the Vigo County School Corp., part of the impetus for change came in 2011-12 when the district had to implement special measures because it was found out of compliance in two [out of 20] state performance indicators by the state Department of Education, Division of Exceptional Learners.

That, in turn, meant Covered Bridge Special Education District had to allocate 15 percent, or about $600,000, of its federal Part B grant [special education grant] to provide general education interventions, rather than special education services, the Tribune-Star reported in 2014.

Notice of compliance issues came in 2011-12 with corrective action to begin in 2012-13. At that time, several behavior interventionists were hired to work with students at identified schools.

The district is now in compliance, Mason said.

According to Blank, the VCSC and Covered Bridge have continued, and expanded, programming because of the positive results.