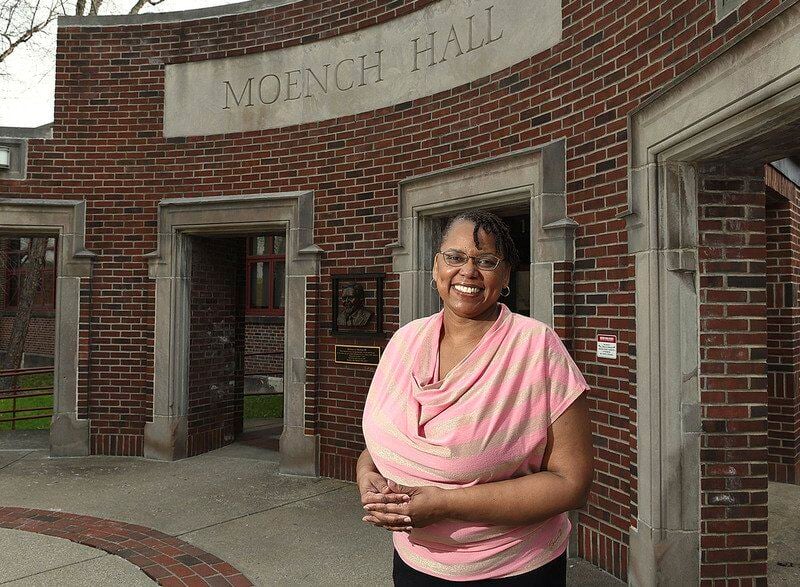 Tribune-Star/Joseph C. GarzaA passion for STEM: Carlotta Berry is a professor of electrical and computer engineering at Rose-Hulman Institute of Technology. She wants to see more students, especially minority students, take an interest in and pursue careers in STEM. Here, she stands outside of Moench Hall on Tuesday. 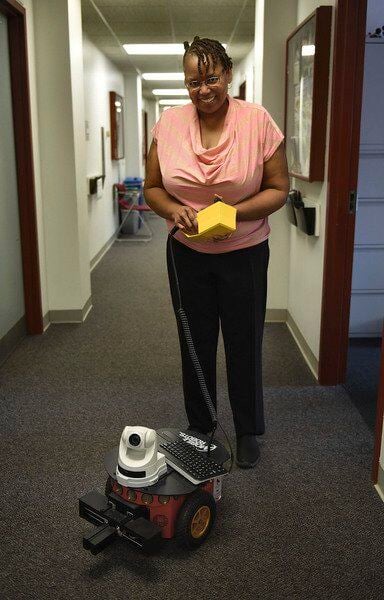 Tribune-Star/Joseph C. GarzaHands on learning: In years past, Carlotta Berry would attend robotics workshops where touching of the robots was not allowed. Now, as a professor, she wants her students to get their hands on the robots and even name them. Here, Berry controls Ratchet the Robot outside of her office in Moench Hall on the Rose-Hulman Institute of Technology campus Tuesday. 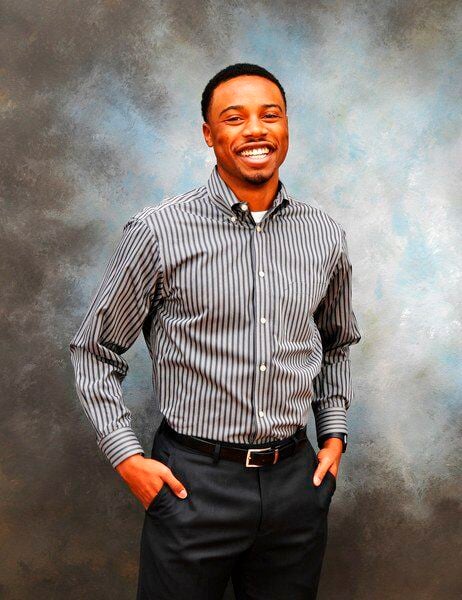 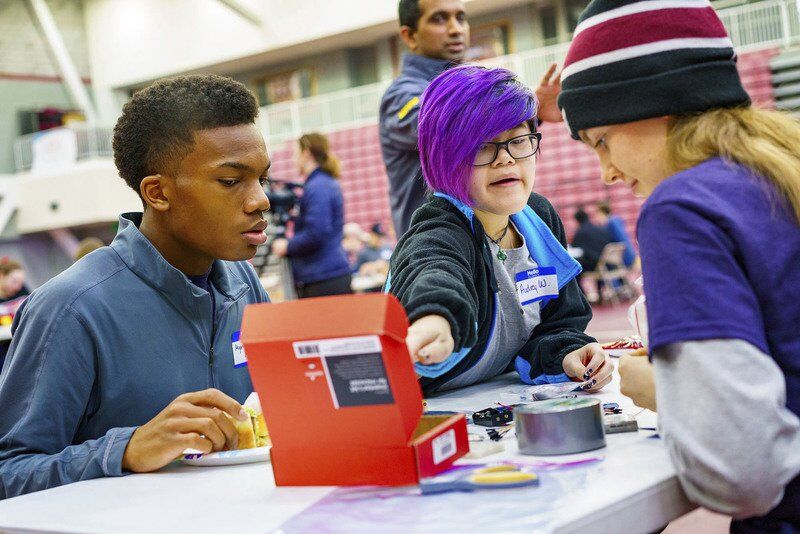 Tribune-Star/Joseph C. GarzaA passion for STEM: Carlotta Berry is a professor of electrical and computer engineering at Rose-Hulman Institute of Technology. She wants to see more students, especially minority students, take an interest in and pursue careers in STEM. Here, she stands outside of Moench Hall on Tuesday.

Tribune-Star/Joseph C. GarzaHands on learning: In years past, Carlotta Berry would attend robotics workshops where touching of the robots was not allowed. Now, as a professor, she wants her students to get their hands on the robots and even name them. Here, Berry controls Ratchet the Robot outside of her office in Moench Hall on the Rose-Hulman Institute of Technology campus Tuesday.

As Carlotta Berry describes it, she was a “late bloomer” in discovering her love of science, technology, engineering and math.

Growing up, she thought an engineer was a train conductor until a higwh school guidance counselor suggested she consider the field of engineering, when she went to a library to do some research.

But even as she increasingly realized her talent and love for math and science during middle school, high school and college, she lacked mentors who looked like her.

She had no one to encourage her when her grades weren’t what they should have been during her undergraduate years — partly because she had to work, at times multiple jobs, to pay for college.

In fact, when Berry failed a college class, a staff member suggested she drop out and go home. “Luckily, I didn’t listen,” said Berry, now 50 and a professor of electrical and computer engineering at Rose-Hulman Institute of Technology.

While at Georgia Tech, she decided to become a professor of engineering. “I didn’t have any female professors or professors who were non-white,” she said. She wanted to help change that.

“I remember how lonely I felt in those classes and how much I just wanted someone to see me and know my name and reach out to me, and go, hey, you can do this,” she said.

But those experiences fueled the fire for her to succeed and to help others like her — women and minorities — find their passion in STEM. “We need more role models,” she said.

That’s exactly what Berry has been doing at Rose-Hulman, and she’s received  awards and much recognition for her efforts — most recently the TechPoint Foundation for Youth Bridge Builder Award.

She will be recognized during an awards program later this month.

”Dr. Berry is a highly regarded, internationally known engineering and robotics expert who is a vocal and relentless STEM education advocate, especially for underrepresented students like she was entering college in the late 1980s,” the organization stated in announcing the award.

According to Berry, “I wanted to change the face of engineering by showing that the profession could be cool, interesting, exciting, engaging, and, most importantly, diverse.”

The path to Rose-Hulman

Berry, a Nashville, Tenn. native, said her mother was a kindergarten teacher and her grandmother taught piano; Berry’s goal was to be a teacher, too.

“It was probably middle school to high school when I discovered I really loved math and science,” she said. She remembers a sixth-grade science fair project in which she built a circuit using a light bulb and battery, probably her first STEM activity.

She attended a magnet high school focused on college prep, and she planned to be a high school math teacher. When a guidance counselor — recognizing Berry’s gifts for math and science — suggested she pursue engineering, she did her research.

Berry decided to become an engineer after her sophomore year in high school.

In college, she pursued a dual degree program through both Spelman College and Georgia Tech in which she could get two degrees — in math and electrical engineering — in five years.

While at Georgia Tech, “I really liked the work I did” and she decided to stay with engineering. While there, she also decided “I really wanted to be a professor,” she said.

After graduation, she worked at Ford Motor Co. as a controls engineer, in part to pay off college debt, and she also pursued a master’s at Wayne State University. She also worked at a Detroit-based electric utility for awhile, but she knew her calling was to be a professor.

She pursued her doctoral degree at Vanderbilt University in Nashville and has been a Rose-Hulman faculty member for nearly 15 years.

She especially appreciates Rose-Hulman’s emphasis on teaching. At some other colleges, research is critical to advancement. “Research is important at Rose-Hulman, but student-centered learning is first,” Berry said.

It’s important for Berry to be there for her students. She remembers times during her undergraduate studies when her professors were too busy with their research efforts to help her when she had questions or problems.

Berry has been an organizer and judge for FIRST Robotics competitions; been featured in several webinars and online presentations about women in robotics and engineering; and written opinion pieces that highlight national issues of Black professors in STEM.

During a sabbatical leave for the 2020-21 school year, Berry has helped form a network of about 400 Black engineering and computer science faculty in discussing their shared experiences with discrimination, marginalization and alienation within higher education, through the hashtag #BlackEngineeringFacultySpeak and a related video series, co-produced by Berry.

Also this past year, Berry has worked with colleagues around the world to start two new non-profit organizations, Black In Engineering and Black In Robotics. Both organizations have a mission to bring awareness to systemic racism and inequity in STEM, build community and advocate for diversity, equity and inclusion.

In getting young people interested in STEM, “Giving them that first taste of success is so important,” Berry said. “But you have to get them first.”

Once during a summer camp, a girl walked in and said she was afraid of robots and didn’t want to participate. But by the end of the program, the girl was enthusiastic about what she had learned. “My robot’s moving,” Berry recalls her saying.

There is this misnomer “that you need to be a super nerd, super smart, super genius. You need to be the kid who was taking cars apart with your dad in the garage when you were in fifth grade. I was none of that,” Berry says.

She was raised in a single-parent household and her mom was a school teacher. “My mom knew nothing about technical stuff,” Berry said.

STEM has a marketing problem, she believes. “It’s for everyone who has a passion to do it and the motivation to do it.”

At the college level, she knows what it’s like to fail a class. But, she tells students, it doesn’t mean you drop out and go home. “You learn from mistakes and you do better.”

One of her former students told her she was his favorite professor of all time even though he failed her class. When, while in school, he asked if there was a way to improve his failing grade, Berry told him, no, “But you’re going to learn when you take [the class] over.”

Today, that student is a successful engineer in industry.

Audrey Walters, a Rose-Hulman junior and electrical engineering major, has interacted with Berry through the RoseBUD program. “Dr. Berry has been a wonderful mentor to me. She always brings so much positivity into a room. She is very intelligent and helpful, but also knows when to step back and let the students figure things out,” Walters said.

Craig McGee, a senior who is about to graduate, said Berry has had “a tremendous impact” on him. He knows Berry through the RoseBUD program; he also had her for a class, and she was his adviser.

He is a computer engineering major.

When he first met her at an interview, “She caught me off guard ... She was very upbeat and very lively,” he said. “She’s a very kind, spirited person — very energetic and she really cares about her job.”

As McGee’s adviser, Berry helped him stay on track with school and other things.

He initially struggled at Rose, and Berry “was very much like my mom and my dad — she kind of gave me that kick in the butt I needed” to keep going, work hard and do well.

As he completes his time at Rose, he said he is finishing strong and has a job in place. “A good part of that can be credited to [Berry]. She helped me stay the course, even when I was in a very bad place academically,” McGee said.

Berry is strict and “expects greatness out of all of her students. She wanted everyone to do as well as they could,” he said. “She’s been very influential in my time here.”

Some people have told Berry she doesn’t act like other professors, to which she says, “Good. ... I need to be at the front of the room breaking the mold.”

But she’s there for all students, not just women and minorities, she said. “Everyone needs to see an engineer who doesn’t look like the prototype.”