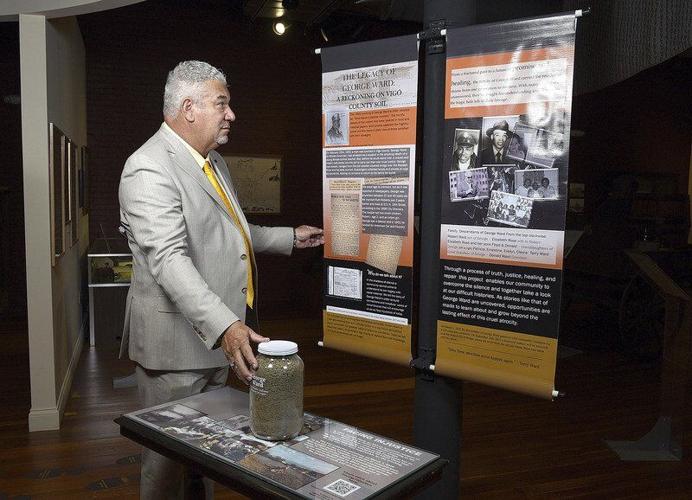 Tribune-Star/Joseph C. GarzaMay such atrocities never happen again: Terry Ward stands next to the display that explains the lynching of his great-great-grandfather, Geroge Ward, on Friday at the History Center of Vigo County. 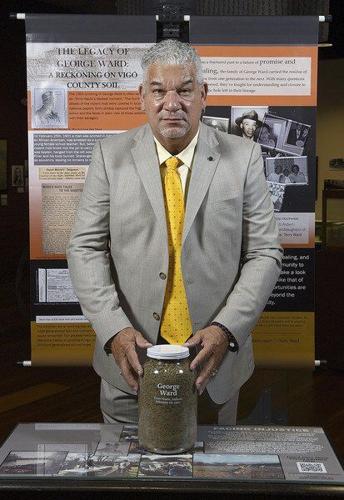 Tribune-Star/Joseph C. Garza‘The Legacy of George Ward’: Terry Ward stands in front of the display dedicated to his great-great-grandfather George Ward on Friday at the Vigo County History Center.

Tribune-Star/Joseph C. GarzaMay such atrocities never happen again: Terry Ward stands next to the display that explains the lynching of his great-great-grandfather, Geroge Ward, on Friday at the History Center of Vigo County.

Tribune-Star/Joseph C. Garza‘The Legacy of George Ward’: Terry Ward stands in front of the display dedicated to his great-great-grandfather George Ward on Friday at the Vigo County History Center.

More than 120 years ago, Terry Ward’s great grandfather, George, was lynched by a mob that stormed the Vigo County Jail and hanged him from the Wabash River bridge.

On Sunday, a historical marker will be unveiled and dedicated in remembrance of George Ward, and Terry will be among the speakers. “We are righting a wrong that is 120 years old,” he said. Several of George Ward’s descendants will attend.

Terry Ward’s hope is that “if we can recognize the injustices of the past, then we should be able to solve some of the injustices presently and into the future.”

The program will begin at 3 p.m. on the north end of Fairbanks Park, and the public is invited. It will include speakers, music and community engagement.

The event is being conducted by the Terre Haute Facing Injustice project, which was launched by the Greater Terre Haute NAACP branch and is part of the national Community Remembrance Project of the Equal Justice Initiative (EJI) based in Montgomery, Alabama.

“It is hoped the marker will provide belated accountability, reconciliation, honor and respect for George Ward and his family,” according to organizers.

Speakers will include a representative from the Equal Justice Initiative in Montgomery, Alabama; State Sen. Jon Ford, who will read the Indiana State Resolution 72, which memorializes George Ward; and Ward’s descendants, including Terry. Mayor Duke Bennett and Sylvester Edwards, Greater Terre Haute NAACP branch president, will read the historical marker.

Several pre-program informational and educational activities will be available for participants at 2:30 p.m. COVID safety and parking recommendations are posted on the website at www.facinginjustice.org.

George Ward was a suspect in the shooting death of a young school teacher, Ida Finkelstein. He was arrested and lynched that same afternoon. The crowd wouldn’t wait for a trial; instead, the mob broke into the jail, violently beat Ward and hanged his body from the nearby bridge. The crowd then burned his body on the river’s west bank.

Terre Haute community members joined the national initiative with a goal of understanding past injustices in order to promote healing and build a stronger and more just community for the future. Vigo County is leading the way in Indiana as the first county to participate in this nationwide project.

Growing up in Terre Haute, Terry Ward said he never knew about the lynching of his great-grandfather. When he was perhaps in his late 20s, his uncle gave him a book titled, “100 Years of Lynching,” and he saw George Ward’s name in it. At the time, Terry Ward remained focused on his career, which was in the public utility sector in Indiana and later California.

In 2001, Terry Ward read a column by historian Mike McCormick about the lynching. “That’s when I began to realize that this was the reason all the men in the Ward family left the area.”

After the 1901 lynching, many male members of the Ward family left the Terre Haute community because of the stigma; younger generations weren’t told what really had happened because family didn’t talk about it.

A few years ago, Terry Ward visited the Equal Justice Initiative Legacy Museum in Alabama and learned about EJI’s efforts to recognize the victims of lynching, including his great grandfather. “When I saw that, it became almost a must for me to search it out,” he said.

Later, when visiting Terre Haute, he asked a contact with the Greater NAACP Terre Haute Branch if they could help him with a project. “The NAACP picked it up from there,” he said.

Sunday’s unveiling of the marker “means a lot, based on the fact [George Ward] didn’t get proper justice, which many black men didn’t get at that time.”

He doesn’t believe his great grandfather committed the crime.

But given George Ward was arrested in connection with Finkelstein’s death, under the U.S. legal system, “Everything has to have due process and he did not have due process.”

Today at 3 p.m., Terry Ward will participate in a program at the Vigo County History Center titled, “The George Ward Story: A Lynching in Terre Haute.” The program is being presented by Crystal Reynolds.

Terry Ward wants to paint a different picture of George Ward, “The picture that he was a human being, the picture of him being a working man, a husband and father — somebody who was striving to take care of his family.”

The remembrance project is also important to Terry Ward out of consideration to his family members. “The stigma has carried on for over 100 years as to who we are. And we’re not what we have been accused of being as far back as George Ward,” he said.

For society in general, “Truly, what I want to see is all injustice stopped. Consider each individual as an individual — not based on the color of their skin,” he said.

He’s a fair complected Black man, and he’s seen the unequal treatment of his own family members who are darker complected.

And that, as well as this weekend’s remembrance of George Ward, gives him grounds for optimism.

Terry Ward felt a measure of peace Monday afternoon. Long-awaited peace. One-hundred and 21 years after his African American great-grandfather, George Ward, was lynched in Terre Haute by a vicious white mob that also burned his body.