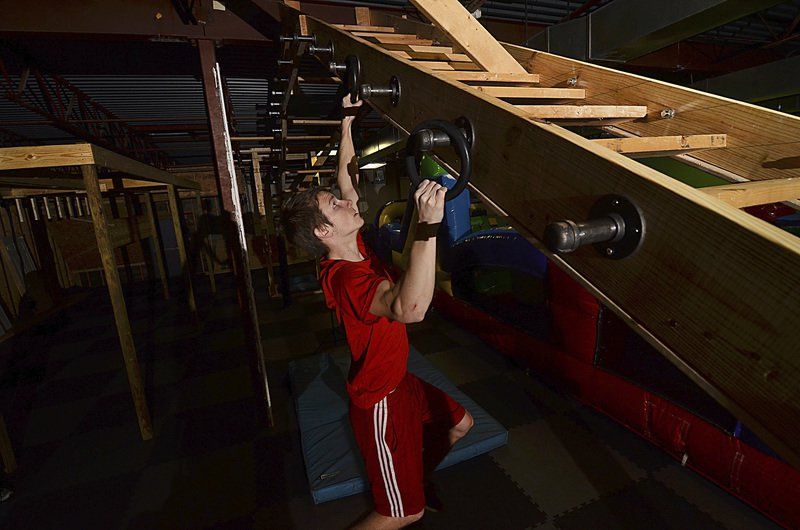 Tribune-Star/Joseph C. GarzaUpper body workout: Spencer Clapp, 21, of Indianapolis and a student at Indiana University, tries to move from peg to peg on a giant wooden frame at Ivy Fit in Farmersburg on Tuesday. 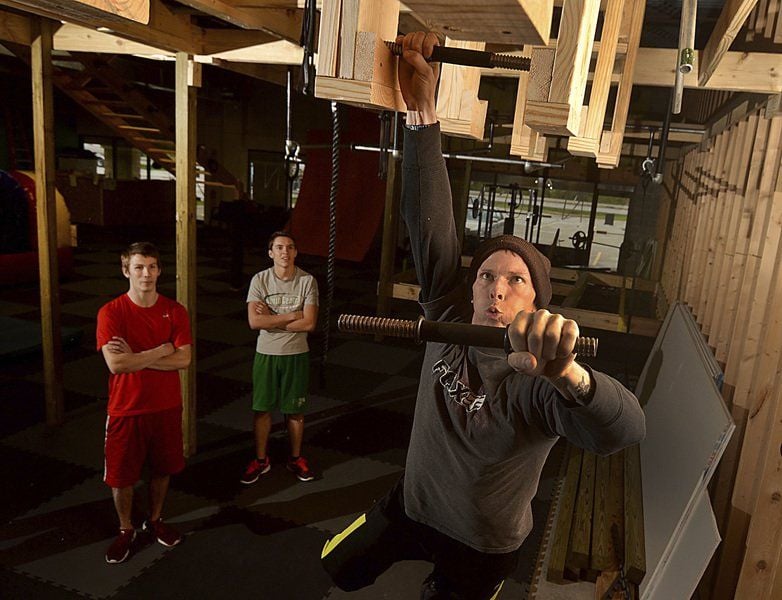 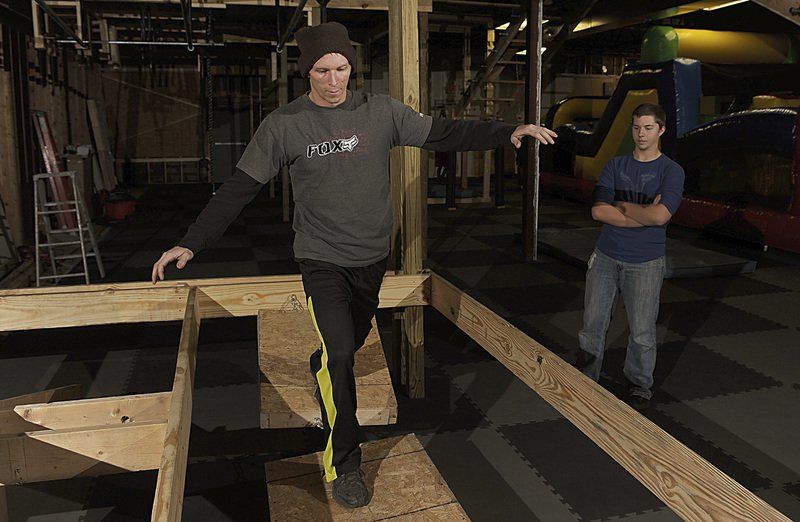 Tribune-Star/Joseph C. Garza It's all in the technique: Ivy Fit owner Jeremy Ivy describes to Nathan Melchert, right, of Fairbanks how to navigate the twisting panels of the "American Ninja Warrior" course on Tuesday at Ivy's new gym in Farmersburg.

Tribune-Star/Joseph C. GarzaUpper body workout: Spencer Clapp, 21, of Indianapolis and a student at Indiana University, tries to move from peg to peg on a giant wooden frame at Ivy Fit in Farmersburg on Tuesday.

Tribune-Star/Joseph C. Garza It's all in the technique: Ivy Fit owner Jeremy Ivy describes to Nathan Melchert, right, of Fairbanks how to navigate the twisting panels of the "American Ninja Warrior" course on Tuesday at Ivy's new gym in Farmersburg.

If you can master the obstacles in Jeremy Ivy’s new gym, you stand a chance of becoming America’s next ninja warrior.

The facility offers equipment designed to strengthen endurance, balance and agility skills, as well as bounce houses for children.

All of the obstacles, he explained, are as difficult or even harder than those shown on the program.

“In reality, it’s good in about every way you look at it,” Ivy told the Tribune-Star, as he guided clients through their workouts Tuesday afternoon. “So much better than a normal gym.”

Ivy was recovering from shoulder surgery in 2013 when he began watching repeats of “Ninja Warrior” with his brother, Phil.

It wasn’t long before he wanted to try out for the show.

“Ninja Warrior,” a staple of NBC’s summertime schedule, features contestants attempting to complete four stages of increasingly difficult obstacles. The show is a spin-off from a Japanese TV series.

After training at home, he walked on to a regional qualifying event in Kansas City but didn’t successfully complete the required tasks. Ivy pressed ahead to the next qualifying event in Pittsburgh, camping out in his car for three weeks waiting for producers to select him.

Ivy appeared on the show this summer.

Knee troubles followed him all the way through the third stage, the balance obstacle portion, where he was eliminated. It turned out he’d competed with a torn ACL and MCL and a partially torn meniscus.

“Basically, I had a half blown-out knee,” he said.

While recovering, he switched focus to a lifelong dream of owning a business. His parents seemed to support his proposal for a ninja warrior training gym.

The facility opened Nov. 1. Among the obstacles available is a warp wall — which requires users to run up a large incline — and a salmon ladder, which Ivy compares to a tough pull-up.

Clients can sign up for a daily membership, and Ivy is planning his first competition on Jan. 9. Cost is $50 for the competition or $5 for a day pass. For more information, call the gym at 812-236-0256 or visit its Facebook page by searching “Ivy Fit.”

While the gym is designed to train potential contestants, it is not affiliated with the show.

Ivy Fit is exactly the kind of venue Spencer Clapp was looking for as he trains for his shot on “Ninja Warrior.”

The 21-year-old Indiana University junior from Indianapolis discovered the gym through Facebook and made the drive Tuesday to visit.

“This is paradise,” said Clapp, who ran track and field at Cathedral High school.

To try out for the show, contestants must be 21 years old, fill out a written application and submit a biographical video. Clapp said only a few hundred competitors are selected from tens of thousands of submissions.

A final qualification event in Las Vegas follows the regional qualifiers, which rotate throughout the country. The show is filmed in Vegas, and production begins in March.

If he makes it onto the show, Clapp said he looked forward to building his endurance skills and “getting stronger.”

Clapp watched as Ivy demonstrated the Snake Bridge, a handmade obstacle that is not featured on television. The bridge, suspended between two platforms, requires participants to balance themselves while walking across a series of connected beams.

Ivy made it across and turned around, preparing to head back the other direction.

“I think it’s harder this way,” he told Clapp, who was waiting at the other end. “I could be wrong.”

Ivy again successfully maneuvered his way across and Clapp started out, taking slow, deliberate steps along the beams. He, too, reached the other platform without dropping the short distance to the ground.

Clapp’s training partner was Levi Melchert, a senior at North Central High School who competes in track and field.

Melchert, 18, said the obstacles have allowed him to build core strength.

“And [it’s] also kind of a fun way to train, rather than just lifting weights,” he said.

Nick Hedrick has been a reporter for the Tribune-Star since 2015. A 2012 graduate of Indiana State, he covered government and features for the (Winchester) News-Gazette and was editor of the Jackson County Banner before returning to Terre Haute.