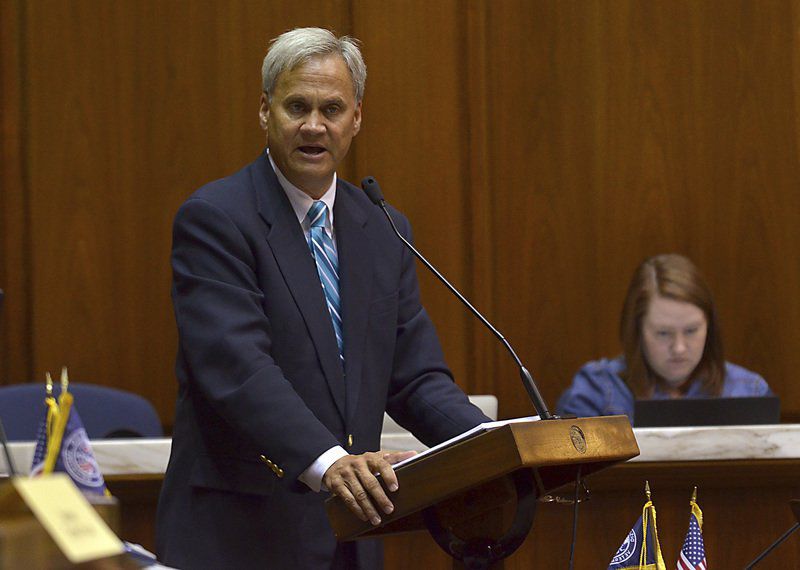 Tribune-Star/Joseph C. Garza The right measures: State Sen. Jim Merritt, an Indianapolis Republican, talks about the importance of taking the proper measures to protect children in public schools during a legislative study committee meeting on Monday, July 18, at the Statehouse in Indianapolis. 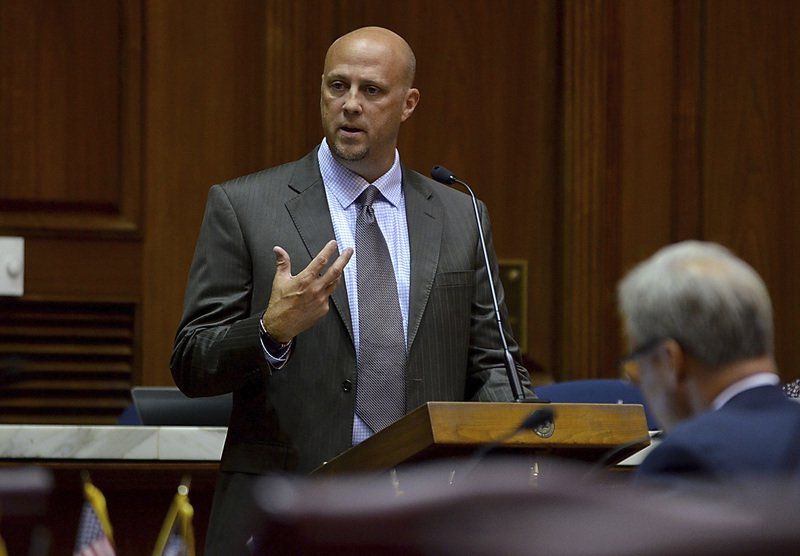 Tribune-Star/Joseph C. Garza Investigative experience: Mike McCarty, president and CEO of SafeHiring Solutions, talks about his experience with background checks during a legislative study committee meeting on Monday, July 19 at the Statehouse in Indianapolis. 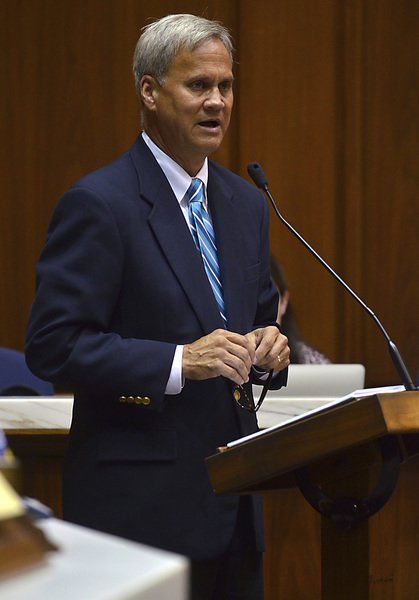 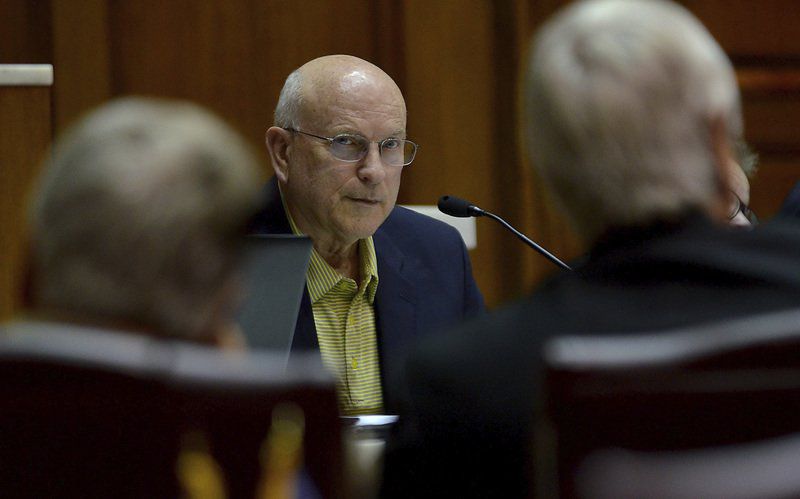 Tribune-Star/Joseph C. Garza The right measures: State Sen. Jim Merritt, an Indianapolis Republican, talks about the importance of taking the proper measures to protect children in public schools during a legislative study committee meeting on Monday, July 18, at the Statehouse in Indianapolis.

Tribune-Star/Joseph C. Garza Investigative experience: Mike McCarty, president and CEO of SafeHiring Solutions, talks about his experience with background checks during a legislative study committee meeting on Monday, July 19 at the Statehouse in Indianapolis.

The law, HEA 1005, which took effect July 1, requires an inquiry with the Indiana Department of Child Services as to whether there is a substantiated report of child abuse or neglect.

In addition to checks with DCS in Indiana, the law requires:

• A similar check in other states where the applicant has lived since age 18.

• For prospective teachers, if they were licensed in another state, schools must check with the department of education in those states regarding whether the individual ever had a license suspended or revoked there.

The law was prompted by some high-profile cases, particularly in the Indianapolis area, involving educators accused of having inappropriate sexual relationships with students.

In one case, a former Indianapolis Park Tudor High School basketball coach coerced a student into exchanging sexual text messages and faced federal charges. In May, the former coach agreed to plead guilty to a charge of coercion or enticement.

The Vigo County School Corp. is incorporating the changes into its policy, and the changes are already being implemented for recommended new hires, said Ray Azar, director of student services.

He believes the changes are positive ones that show the state is working to strengthen background checks. Legislators “recognize there are some weaknesses in the present law, and they are trying to tighten that up,” Azar said.

In the past, checking for substantiated incidents of abuse/neglect with state child welfare agencies has not been required,” Azar said. “Now, it’s being required.”

In 2006, the district toughened its background checks and has required a national criminal history check as well as a check of sex offender registries; state law made that a requirement in 2009. For the past several years, the district has used Reference Services of Evansville to conduct the checks, which costs prospective employees $50.

With the new checks required by state law, the cost is expected to increase to $65, Azar said, although it could cost more for background checks involving out-of-state agencies.

But no matter how stringent the law, Azar said, “No system you’ll find will be 100 percent.”

And even the most stringent checks won’t help when someone with no record of problems commits a sex offense involving a student.

When incidents do occur in schools, “We work with principals and administrative staff, and they are supposed to work with their own staff, to make sure everyone understands the seriousness of it” and the consequences, Azar said.

HEA 1005 has other requirements.

State Sen. Jim Merritt, an Indianapolis Republican who serves on the committee, has worked on children’s issues for most of his 26 years in the Legislature. “We have to try everything we can to keep predators out of our schools and keep our kids safe,” he said.

State Sen. Dennis Kruse, R-Auburn, serves as the committee’s vice chairman. “I think the frequency of it bothers us,” he said, although it’s not clear if there are more incidents or increased reporting. “Maybe we need additional training of teachers and telling them about what the law is and giving them prior warning.”

Some steps were taken this past legislative session to close loopholes through HEA 1005.

According to Julie Slavens, attorney with the Indiana School Boards Association, the change in law calls for an “expanded child protection index check” for applicants or new hires within three months after they are hired and applies to employees who have ongoing contact with children.

Slavens, who believes the new law was prompted by some of the recent high profile cases in the Indianapolis area, has concerns that sometimes legislation is reactionary to a few situations and may not be well thought through.

There may be times with highly publicized incidents legislators believe “we have to do something — instead of, is this really an issue and what is the appropriate way to address it,” she said.

He estimated about 40 to 50 percent of school employees in Indiana have never had an expanded, nationwide criminal history check since the 2009 state law began requiring it for new hires.

McCarty also pointed out that a majority of sex offenders don’t have criminal histories because incidents haven’t been reported.

He did point out some challenges with the new law. For example, in contacting other states about substantiated reports of child abuse or neglect, it can’t be done in four states and in many other states, it must be initiated by the prospective employee.

Also during Monday’s hearing, Parvonay Stover, DCS legislative director, told committee members that under Indiana law, anyone who suspects child abuse or neglect has a legal obligation to report it to the state Department of Child Services or law enforcement. “Everyone is a mandated reporter,” she said.

The DCS child abuse and neglect hotline is 800-800-5556, and callers can remain anonymous.

Fishers attorney Mario Massillamany sees many problems that need to be fixed with the current system. He is representing a former Hancock County middle school student and the individual’s parents in a civil lawsuit that alleges school officials had ignored complaints from another school employee about a teacher’s inappropriate behavior. The suit says an alleged sexual assault against his client could have been prevented had school officials investigated prior complaints against the teacher.

The former middle school teacher in question was charged with molestation, but later pleaded guilty to battery.

When allegations are made, school officials need to act promptly to protect the students, Massillamany said. “We need to make sure administrators are taking reporting requirements seriously and not waiting a day or two days or a week and doing their own investigations,” he said. “These school corporations are so scared to get negative publicity that they sometimes jeopardize children’s welfare because they are more concerned about their own public image.

“When we as parents send kids to school, the school acts in the role of a parent,” Massillamany said, “and priorities should be students first over the image of the school.”