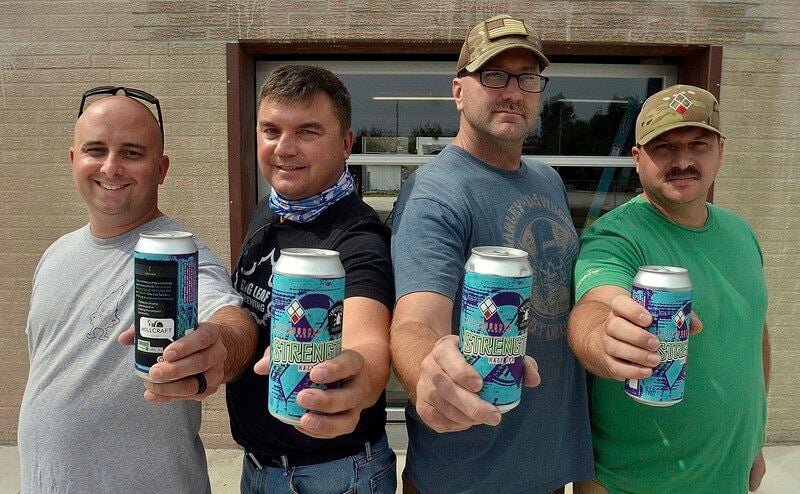 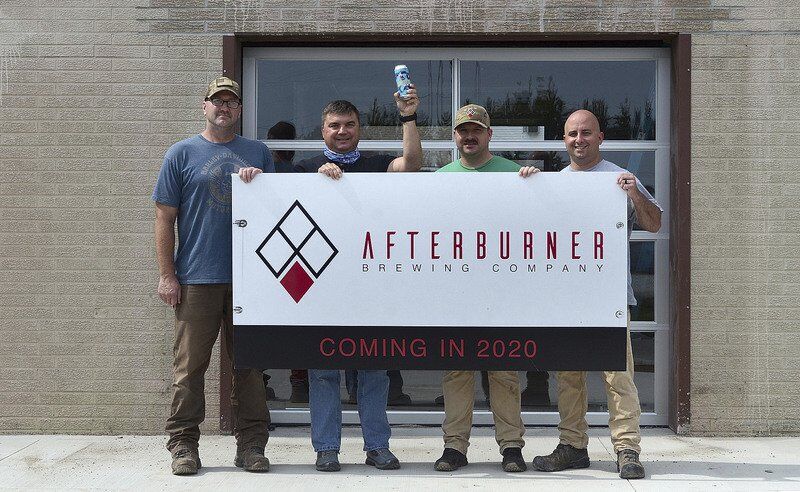 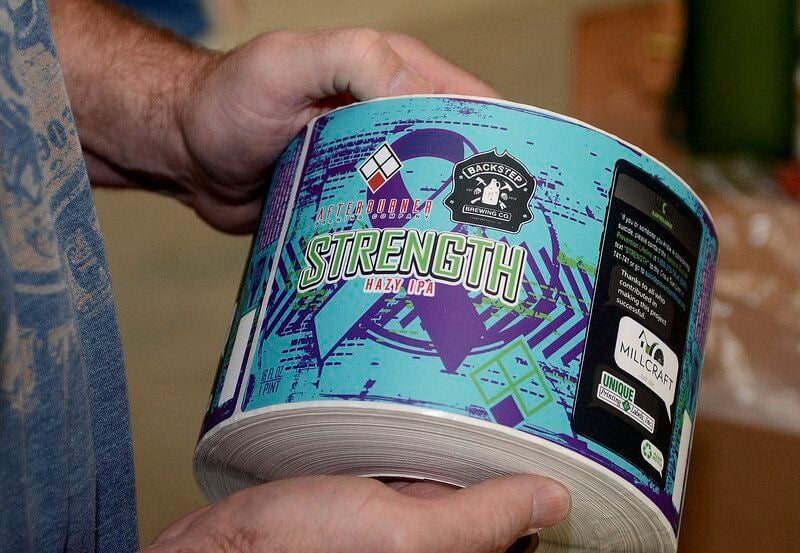 Tribune-Star/Joseph C. Garza For a good cause: Afterburner Brewing Company's collaboration with Back Step Brewery is part of the Hoosier Buddy Project, which uses craft beer to highlight suicide awareness and prevention. Afterburner Brewing has produced a beer called Strength Hazy IPA. Here, John Null unpacks the labels for Strength that arrived earlier on Wednesday at the brewing company at 629 South Ninth Street. 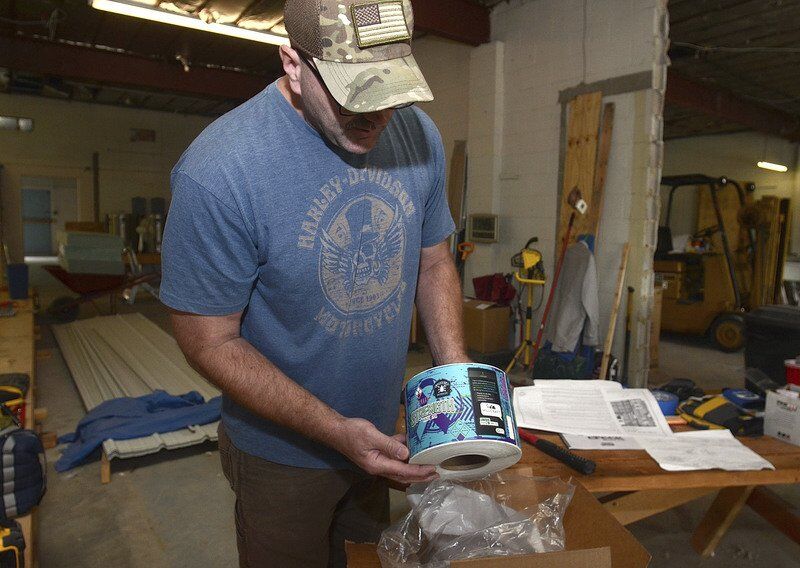 Tribune-Star/Joseph C. GarzaFor a good cause: Afterburner Brewing Company’s collaboration with Back Step Brewery is part of the Hoosier Buddy Project, which uses craft beer to highlight suicide awareness and prevention. Afterburner Brewing has produced a beer called Strength Hazy IPA. Here, John Null unpacks the labels for Strength that arrived earlier on Wednesday at the brewing company at 629 South Ninth Street. 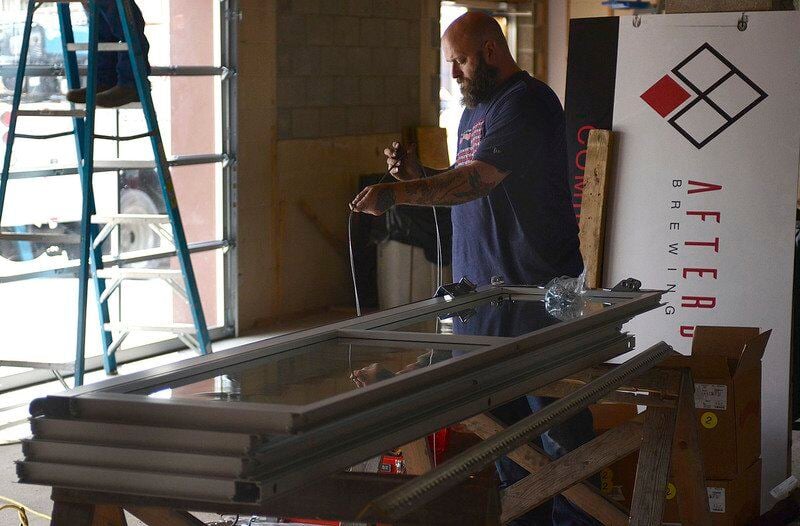 Tribune-Star/Joseph C. GarzaFor a good cause: Afterburner Brewing Company’s collaboration with Back Step Brewery is part of the Hoosier Buddy Project, which uses craft beer to highlight suicide awareness and prevention. Afterburner Brewing has produced a beer called Strength Hazy IPA. Here, John Null unpacks the labels for Strength that arrived earlier on Wednesday at the brewing company at 629 South Ninth Street.

“Afterburner is synonymous with fighter jets,” said Dustin Strole, who along with John Null, Greg Hrovat and Robert Wiemuth met while in the Indiana National Guard. “Plus there is a [social] club on base called the Afterburner Club where we got into craft beer and where we all got to really know each other.

“Two of us still work full time at the 181st [Intelligence Wing of the Indiana Air National Guard at Terre Haute Regional Airport] and the other two have retired” from that service, said Strole, who along with Hrovat, are working at the Guard base.

For those not familiar with aircraft, an afterburner is an additional combustion component used on military aircraft to increase thrust for supersonic flight, takeoff, and combat.

The brewery’s logo is a diamond, with the bottom half colored red, representing the afterburner, with the remainder of the diamond forming a jet aircraft.

Strole, Null and Wiemuth are from Terre Haute, while Hrovat is from Clinton. Wiemuth is more of a fourth partner, as he lives in Wisconsin and flies for a major airline. His family formerly owned Wiemuth & Son Company Inc. in Terre Haute.

“I was the last F-4 pilot in our unit trained in Terre Haute,” Wiemuth said. He switched to flying an F-16 prior to retiring from the military.

“Being in a fighter unit was pretty unique, not many people have done that. Being paired with these guys allowed me to come in and be a part of this, which is an experience I am looking forward to,” he said.

The friends already have brewing experience, brewing craft beers for Big Leaf Brewing located at The Sycamore Winery in West Terre Haute, and plan to continue that.

Yet, the goal of every brewer is to own their own business, Strole said.

The group, formed as Darn Beer Inc., last year purchased the former Valley Press building at 629 S. Ninth St., and are working to make it the home of Afterburner Brewing Company. The former print shop building will have a capacity for 98 people inside its tap room, plus an outdoor patio that will seat 50 people. That outside area will have picnic tables. The brewery will have snacks, but not sell food, with carry-in food welcome on site.

“We have also been in talks with food trucks to set up, so we will rely on food trucks and whatever people want to bring in to eat or order have delivered,” Strole said.

The brewery, delayed due to the COVID-19 pandemic, expects to open its tap room in the spring, but is working to have a small sampling of its beer available at some Terre Haute bars by the end of this year. The brewery is in the midst of applying for an alcoholic beverage permit.

The brewery will use a seven-barrel system, plus a one-barrel pilot system, to produce about 217 gallons of beer per batch, and plans to sell the majority of its beer in-house, distributing some of its products to some bars in the city. The brewery expects to make 750 to 1,000 barrels annually. The brewery will rely on Indianapolis-based Millcraft, a mobile canning company. The same company cans beer for the Terre Haute Brewing Co.

The single-barrel pilot system, where beers are made to determine if it will be mass produced, was purchased from the Sycamore Winery, Hrovat said, while the seven-barrel system is being manufactured by Blichmann Engineering of West Lafayette, a design and manufacturing firm that makes brewery systems.

That equipment is expected to be delivered to Afterburner Brewing in November, said Hrovat, known amongst the group as “the gadget guy.”

“I like contraptions. I like to make the [brewing] system a little more efficient, make it a little more consistent because we need to rule out what we are doing wrong,” Hrovat said.

“The individual who is designing our new brewing system is someone who we are doing our first collaboration with, and is the head brewer at Back Step Brewery in Crawfordsville,” Hrovat said.

The collaboration with Back Step Brewery is part of the Hoosier Buddy Project, which uses craft beer to highlight suicide awareness and prevention.

Null said the group wanted to join the Hoosier Buddy Project “as we are all military guys, basically service is part of what we do, so this is a way we felt we can give back and be involved in the project. It is a collaboration,” Null said.

Null said Strength has already been brewed and will be canned next week. Afterburner Brewing Co. expects to can 40 to 45 cases of the IPA to go to Back Step Brewery.

“Millcraft is donating their time and Unique Printing [of Greenfield] is donating the labels. It is a collaboration with Backstep Brewing Co., named after the back step of a fire truck,” Wiemuth said. “They will sell and distribute it,” starting Oct. 1.

Future work on the Afterburner tap room, among other things, includes installing a 20- to 22-foot long bar. The tap room’s interior will be an industrial motif, Null said.

The brewery, Null said, seeks to have 8 to 12 beers available at its tap room. Additionally, Null said Afterburner Brewing plans also include cold brew coffee and brewed root beer as non-alcoholic drinks. The brewery plans to use 20-millimetre rounds as beer tap handles, the same rounds used as ammunition in the F-16 and F-15 by the U.S. Air Force.

The new brewery is located in an area that once had been a major brewing site - a city block filled by the Terre Haute Brewing Co., opened in 1837, which once was the nation’s seventh-largest brewery. That brewery, now a microbrewery, reopened in 2016.

“The proximity to the old brewing district is what really sold us on the location” for Afterburner Brewing, Strole said. “Breweries don’t compete, traditionally, they kind of feed off of each other. When people go to a brewery, they are more likely to go to multiple breweries when they are in proximity to each other.”