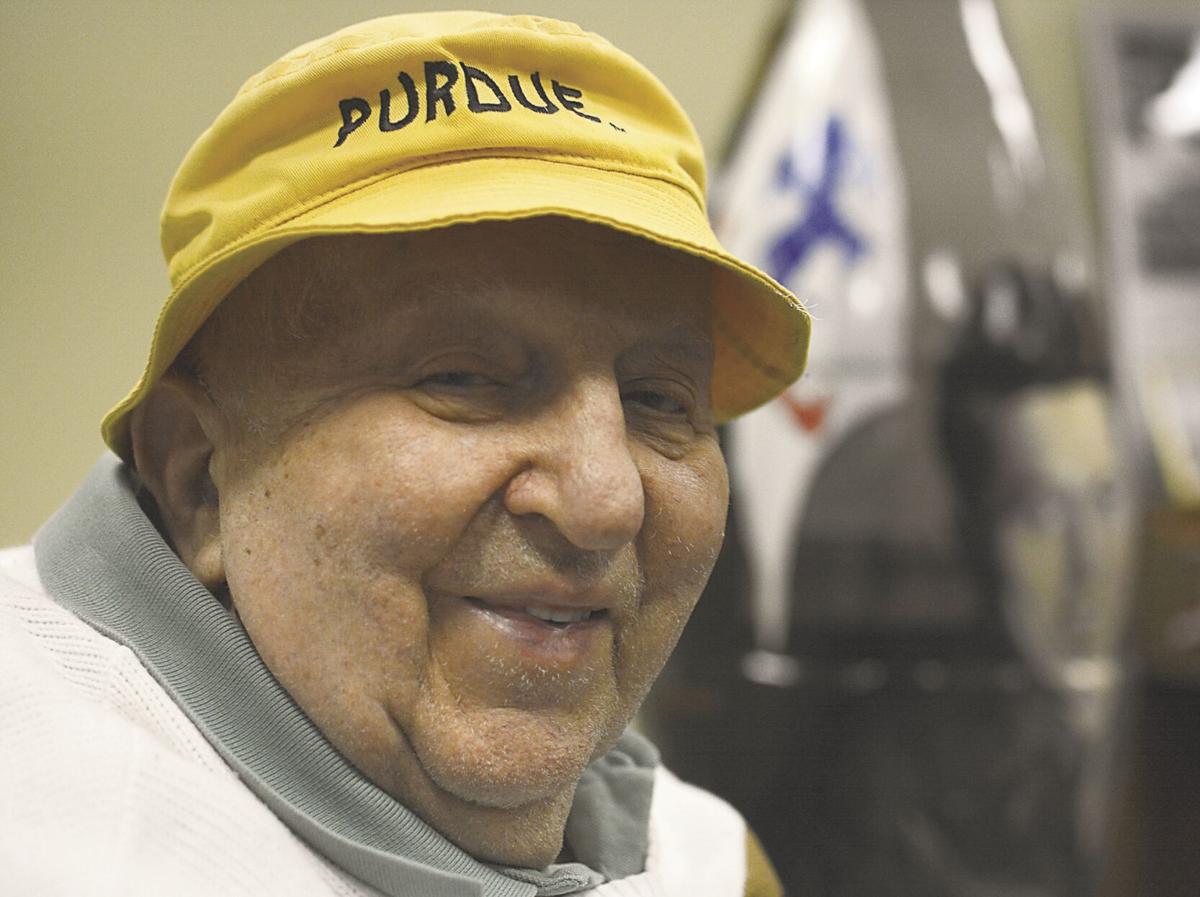 A familiar face on a familiar shape: Mickey Kor smiles for the camera during the unveiling of his Coca-Cola bottle on Saturday in the CANDLES Holocaust Museum. A portrait of a younger Kor has been painted on the bottle along with various other details from his life after he was liberated by Lt. Col. Andrew Neff who was originally from Terre Haute. 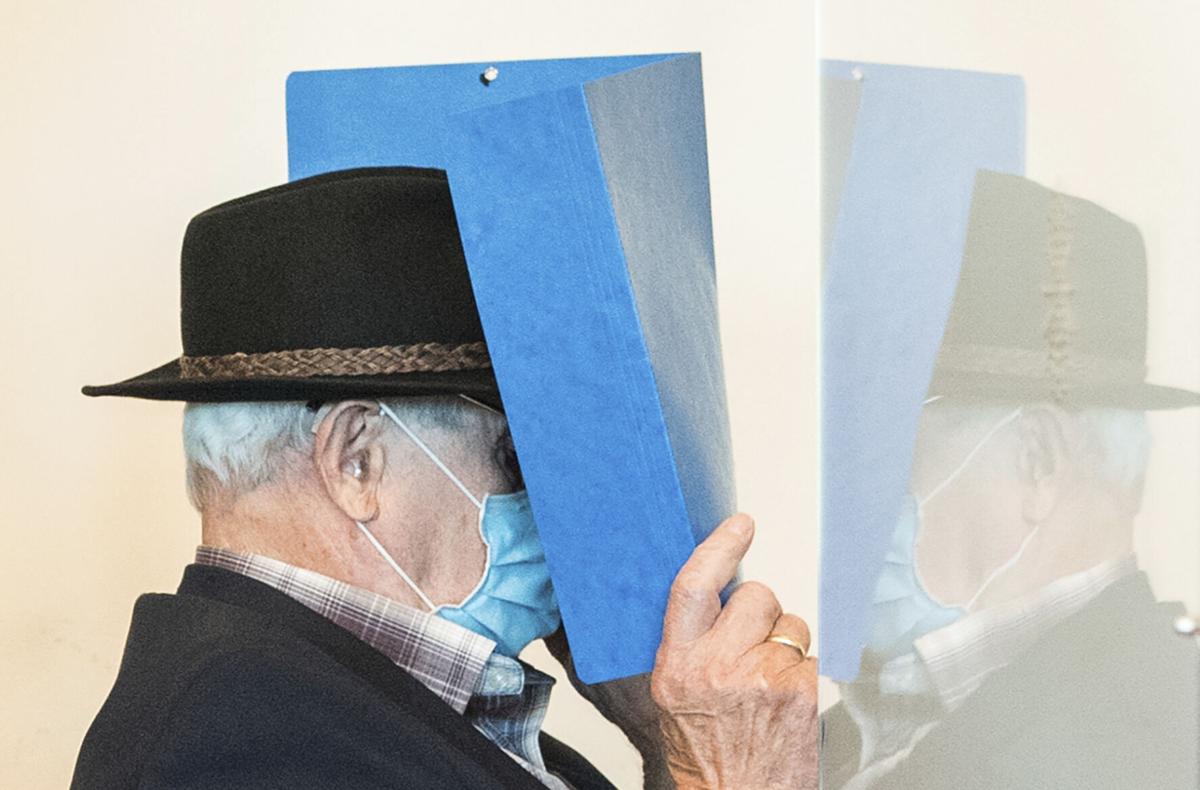 A 93-year-old former SS guard of the Stutthof concentration camp near Danzig in Poland is pushed into a courtroom in the regional court in Hamburg, Germany, Thursday, July 23, 2020. The Hamburg Regional Court sentenced the former guard to two years juvenile sentence on probation. The juvenile court found him guilty of aiding and abetting murder in 5232 cases and of aiding and abetting attempted murder.

A familiar face on a familiar shape: Mickey Kor smiles for the camera during the unveiling of his Coca-Cola bottle on Saturday in the CANDLES Holocaust Museum. A portrait of a younger Kor has been painted on the bottle along with various other details from his life after he was liberated by Lt. Col. Andrew Neff who was originally from Terre Haute.

A 93-year-old former SS guard of the Stutthof concentration camp near Danzig in Poland is pushed into a courtroom in the regional court in Hamburg, Germany, Thursday, July 23, 2020. The Hamburg Regional Court sentenced the former guard to two years juvenile sentence on probation. The juvenile court found him guilty of aiding and abetting murder in 5232 cases and of aiding and abetting attempted murder.

Bruno Dey, 93, was given a two-year suspended sentence Thursday for his role as an accessory to 5,232 murders at Stutthof concentration camp in Poland during World War II.

Mickey Kor was a prisoner at Stutthof, located near modern-day Gdansk, Poland. More than 65,000 people are thought to have died in the camp, from illness and malnutrition as well as from the gas chambers and other executions.

“My father does not specifically recall Bruno Dey,” said Alex Kor on behalf of his father, who submitted a statement to a German court in February.

The statement recommended forgiveness for Dey, who claimed during the trial he was unaware of many of the atrocities committed by the Nazis.

“The war killed a lot of people,” Kor said in his statement. “In war, you do not think about consequences; you just keep fighting and firing guns. Every day in Stutthof, we were afraid for our lives, but it is all forgotten now. You no longer keep track and you do not choose your feelings.

“My feelings are that in war, people are caught in events that they cannot control. The war is over and he should be forgiven,” Kor said. “I do not want any more punishments. The war is over.”

Alex Kor said he believes his father has embraced Eva’s message of forgiveness.

“I was surprised by my dad’s statement for forgiveness,” he said. “I really didn’t know what he was going to say, but I had imagined it would include a call for punishment. I think the concept of forgiveness is my mom’s legacy, and my dad has also embraced it, in honor of her.”

Markus Goldbach, the attorney representing Mickey Kor and the other survivors at Dey’s trial, said he was pleased by the verdict, and he was impressed by Kor’s statement.

“It [the statement] was not cited too much because there were victims who could testify in person, which was much more important for the case,” Goldbach said in a message to Alex Kor. “But I think that the story of your dad is so important to mention and to show to the world. This should include his marriage to Eva, and his decision to support her now that she has passed away. This is a form of true love.”

Mickey Kor and Eva Mozes met in Israel and married in 1960.

Eva Mozes Kor, born in Romania, was a survivor of the Auschwitz concentration camp who was subjected to the experiments of the notorious SS doctor Josef Mengele, as was her twin sister, Miriam.

To educate the world about the Holocaust, Eva Kor founded CANDLES Holocaust Museum and Education Center in 1995. She preached a message of forgiveness, seeing it as a way of healing oneself from pain, trauma and tragedy — means of self-liberation and self-empowerment.

Eva Kor and her message gained an international audience, and her story is the subject of “Eva, A-7063,” a documentary film by Ted Green, Mika Brown and WFYI.

“How could you get used to the horror?” presiding judge Anne Meier-Goering asked as she announced the verdict. She said that the fact Dey was taking orders didn’t free him from guilt.

Because he was 17 and 18 at the time of his alleged crimes, Dey’s case was heard in juvenile court. Prosecutors had called for a three-year sentence, while the defense sought acquittal.

The judge said that, while Dey should have tried to avoid service at Stutthof, the sentence was appropriate to his guilt.

“You were not yet grown up then, still so young in a time when a lack of conscience had seized a whole people as never before,” Meier-Goering said.

The trial opened in October. Because of Dey’s age, court sessions were limited to two, two-hour sessions a week. Additional precautions also were taken to keep the case going through the height of the coronavirus pandemic.

In a closing statement earlier this week, the wheelchair-bound German retiree apologized for his role in the Nazis’ machinery of destruction, saying “it must never be repeated.”

“Today, I want to apologize to all of the people who went through this hellish insanity,” Dey told the court.

For at least two decades, every trial of a former Nazi has been dubbed “likely Germany’s last.” But just last week, another ex-guard at Stutthof was charged at age 95. A special prosecutors’ office that investigates Nazi-era crimes has more than a dozen ongoing investigations.

Prosecutors argued that as a Stutthof guard from August 1944 to April 1945, Dey — though “no ardent worshipper of Nazi ideology” — aided all the killings that took place there during that period as a “small wheel in the machinery of murder.”

Efraim Zuroff, the head Nazi hunter at the Simon Wiesenthal Center’s office in Jerusalem, criticized the suspended sentence as “tainting the process” of trying to bring justice for Holocaust survivors, saying Dey waited until he was facing jail time before apologizing for his actions.

“We’re very pleased he’s convicted but upset about the sentence, which in a certain sense is an insult to the survivors,” Zuroff said in a telephone interview. “There has to be some element of punishment.”

Dey gave wide-ranging statements to investigators about his service, saying that he was deemed unfit for combat in the regular Germany army in 1944 so was drafted into an SS guard detachment and sent to the camp near Danzig, now the Polish city of Gdansk.

Initially a collection point for Jews and non-Jewish Poles removed from Danzig, Stutthof from about 1940 was used as a so-called “work education camp” where forced laborers, primarily Polish and Soviet citizens, were sent to serve sentences and often died.

From mid-1944, when Dey was posted there, tens of thousands of Jews from ghettos in the Baltics and from Auschwitz filled the camp along with thousands of Polish civilians swept up in the brutal Nazi suppression of the Warsaw uprising.

More than 60,000 people were killed there by being given lethal injections of gasoline or phenol directly to their hearts, shot or starved. Others were forced outside in winter without clothing until they died of exposure, or were put to death in a gas chamber.

Dey told the court that as a trained baker’s apprentice, he attempted to get sent to an army kitchen or bakery when he learned he’d been assigned to Stutthof.

As a guard there, he said he frequently was directed to watch over prisoner labor crews working outside the camp.

Dey acknowledged hearing screams from the camp’s gas chambers and watching as corpses were taken to be burned, but he said he never fired his weapon and once allowed a group to smuggle meat from a dead horse into the camp.

“The images of misery and horror have haunted me my entire life,” he testified.

— David Rising wrote for the Associated Press. Lisa Trigg contributed for the Tribune-Star.