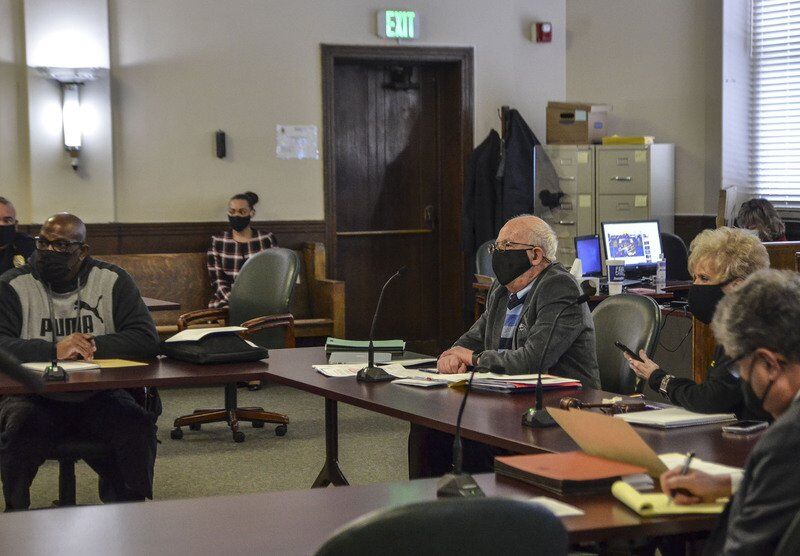 Tribune-Star/Austen LeakeIssue at hand: Members of the Terre Haute Police Department Merit Commission listen to public comment about the discipline of Sgt. Brad Newman at City Hall on Wednesday. 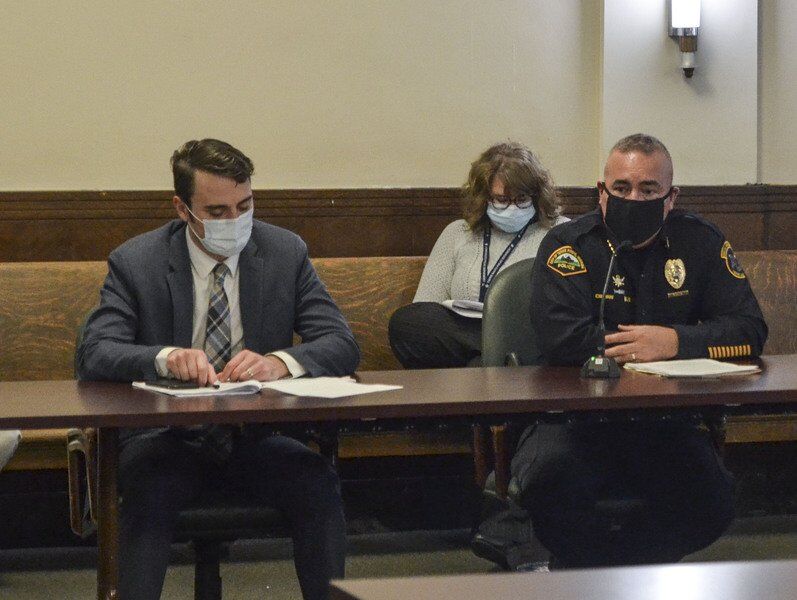 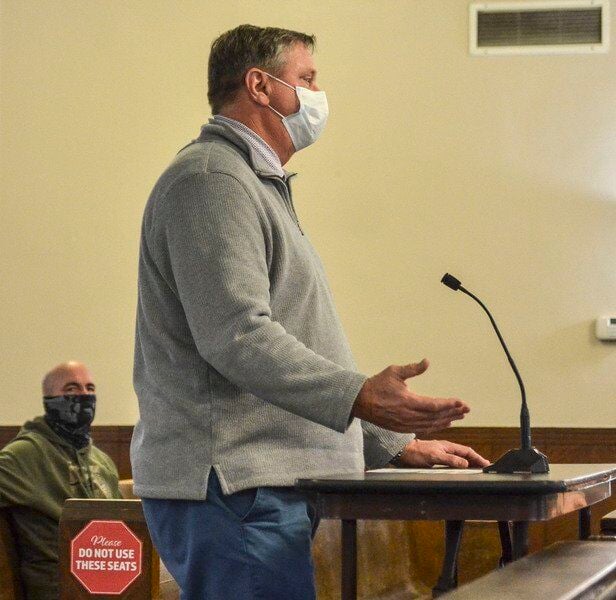 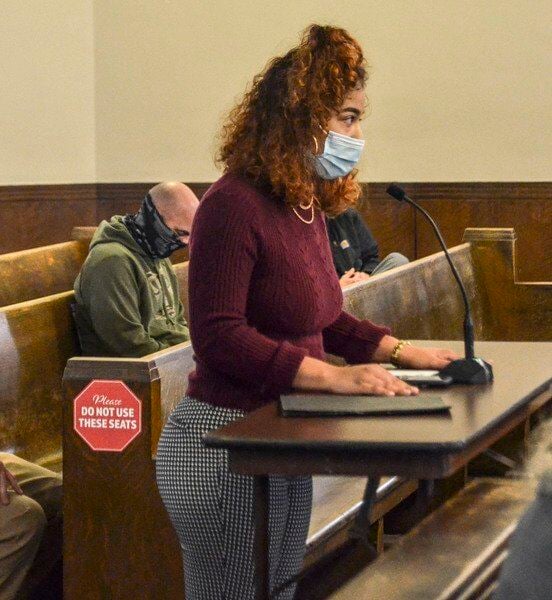 Tribune-Star/Austen Leake "Unacceptable": Dominique Morefield, a founder of The Reform Movement of Terre Haute, called for the dismissal of  Sgt. Brad Newman during Wednesday's meeting of the Terre Haute Police Department Merit Commission at City Hall.

Another three people spoke in support of Newman during the hour-long meeting in the City Hall courtroom.

Newman was issued a six-day suspension in January as a result of a citizen’s complaint about his December 2020 personal Facebook page postings calling for a nuclear attack on China, which he said must be held accountable for the COVID-19 pandemic.

Challenged by another poster as to whether he was serious about killing millions of people, Newman responded, “Absolutely! Smoke ‘em.”

The merit commission also was handed copies of a petition with close to 600 signatures of people calling for Newman’s termination as a city police officer.

Newman has served the six-day suspension, and he will serve six months with additional supervision and training into July.

He also is the Vigo County clerk, having been elected to his second term in November.

“We do not expect, nor will we tolerate any repeat of the behaviors we have seen,” Police Chief Shawn Keen told the merit board of Newman’s social media posts. “Any such repeat of that behavior will result in more serious [discipline], up to and including, a recommendation of termination.”

Newman’s past disciplinary record, revealed in public records requests, shows he has been suspended for more than four dozen days as the result of seven separate incidents from 2007 to 2020. A one-month suspension in 2007 was due to use of excessive force during an arrest.

“We in the community want to trust the police. They play such an important role in our community,” Liz Brown told the board. “We need to have officers that we can trust. That have the highest integrity and who treat everyone fairly, regardless of race, religion, gender — all of that. By these actions of this officer, that causes the community to lose trust.”

Rebecca Bercich, a professor at Rose-Hulman Institute of Technology, was among those who said Newman’s statements are a call for genocide and supports anti-Asian rhetoric.

Agreement came from Grace Clay, who said the merit board’s rules are flawed if an officer with Newman’s disciplinary record can be promoted because discipline occurred more than two years prior.

“Anyone in a civilian job with that many suspensions would have lost their job a long time ago,” Clay said.

Local rules say the merit commission can only consider two prior years of disciplinary records in considering promotions.

Heather Hindle asked the board if Newman’s disciplinary record is typical of officers in THPD.

“I’m hoping it is not, but now I don’t know,” she said. “If this is typical, I’m kind of scared. If it’s not typical, can we not tolerate this?”

Following the meeting, Chief Keen said “there is not a pervasive problem in the department” with officers having multiple disciplinary actions.

During the meeting, Keen said that since he took over as chief in 2019, he has recommended the termination of three officers. Two were on allegations of dishonesty, and the commission approved those terminations.

In the third case, Keen said, an officer accused of domestic battery resigned the day before the merit commission was to act on the chief’s request for termination.

Emily Donohue and Don Ireland both made statements supporting Newman.

“I have known Brad Newman personally to be a compassionate person and a devoted husband, father and friend,” Donohue said. “Brad has lived a life of service, both to this community as a police officer and detective, as well as to this country as a member of the U.S. Army. I do not know or believe Brad to be a prejudiced person in any way shape or form, and understand his regrettable and inappropriate comments on social media may have created that perception. That is not the person I know.”

Ireland said he sees those calling for Newman’s termination as vindictive.

“He made an outrageous, irresponsible, inexcusable post on his Facebook page,” Ireland said, pointing out that Newman has no ability to carry out genocide. “I’m surprised at how people could take it seriously. I don’t believe he deserves to lose his job.”

The final comments came from Dwayne Malone, a civil rights advocate, pastor of First Freewill Baptist Church and a member of Citizens of Action, which works to eliminate bias and discrimination in the community.

Malone said that as a black man living in America, he deals with daily anxieties concerning law enforcement and race, and he is not optimistic that Newman will face any consequences for past actions that resulted in discipline.

Local police officers should want good characters in their department, he continued.

“If your supporting these bad characters, what does that say about the police department,” Malone concluded.

Groups that also spoke to the board or submitted written remarks included Reform Movement of Terre Haute, Citizens of Action, Greater Terre Haute Branch of the NAACP and Interfaith Council of the Wabash Valley presenting on behalf of Asian persons in Terre Haute.

Following the public statements, Chief Keen explained the discipline process that the merit board must follow.

Keen said Newman’s punishment was delivered without favoritism or bias in line with the laws and rules that must be followed.

“I cannot apologize enough for how those posts negatively have affected members of our community,” Keen said.

The chief also said he was aware of disparaging remarks made about the department and merit commission and found those to be unfair, disparaging and less than well informed.

A video of the meeting is available on the city’s YouTube channel.

In other business, the board approved the promotions to sergeant of three officers who successfully completed their probationary periods. Those sergeants are Brent Heaton, James Ribolla and Leslie Hamm.

The board also noted that all investigations have been closed regarding the actions of three officers involved in a September arrest of a suspect in a gunfire incident and subsequent police pursuit. The three have been returned to duty without discipline.

The department will offer promotion testing for officers in May. The test will be administered by an independent contractor, an instructor from Saint Mary-of-the-Woods College.

The merit board will next meet March 17. The time and location of the meeting will be announced.

The Terre Haute Police Merit Commission will hear from the public regarding a city police sergeant who's been suspended for more than four dozen days as the result of seven separate incidents from 2007 to 2020.